Gastric cancer (GC) is the fourth most common cancer worldwide often with poor prognosis [1]. The clinical relevance of GC has been recognized to be influenced by the cross-talk between tumors and host immune system, and a strong anti-tumor immune response in the tumor microenvironment is associated with a favorable clinical outcome [2]. However, although immune cell infiltration in GC is often observed, the anti-tumor immunity is commonly ineffective [3, 4].

In the present study, we firstly aim to examine the levels and functional activity of CD3+CD56+ NKT-like cells in tumor and non-tumor tissues of GC patients, and then analyze the possible associations between these cells and clinical features of GC. We show that decreased levels of tumor-infiltrating CD3+CD56+ NKT-like cells with functional impairment correlated with tumor progression and poor overall survival of GC patients. Restoring their effector function should benefit anti-tumor immunity to GC. 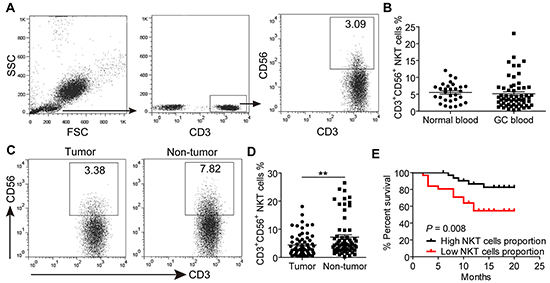 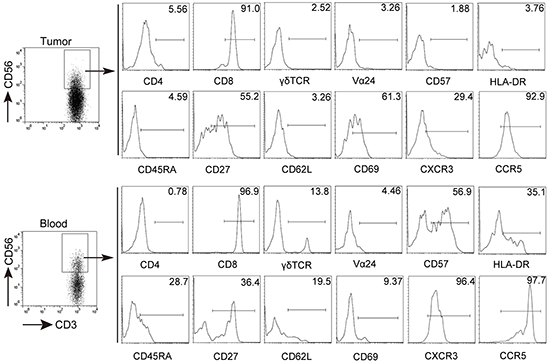 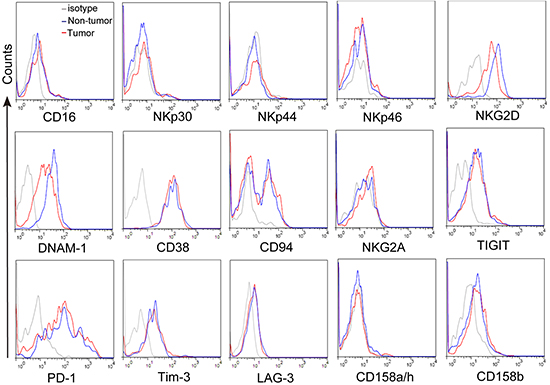 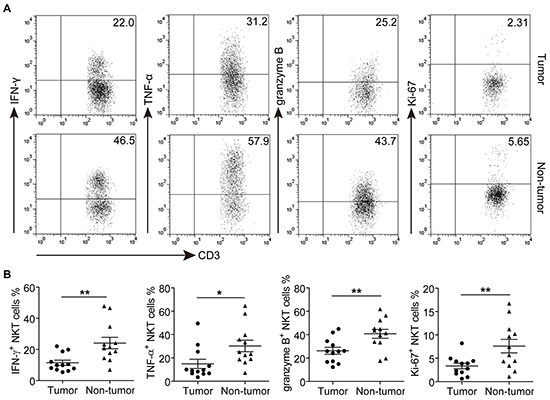 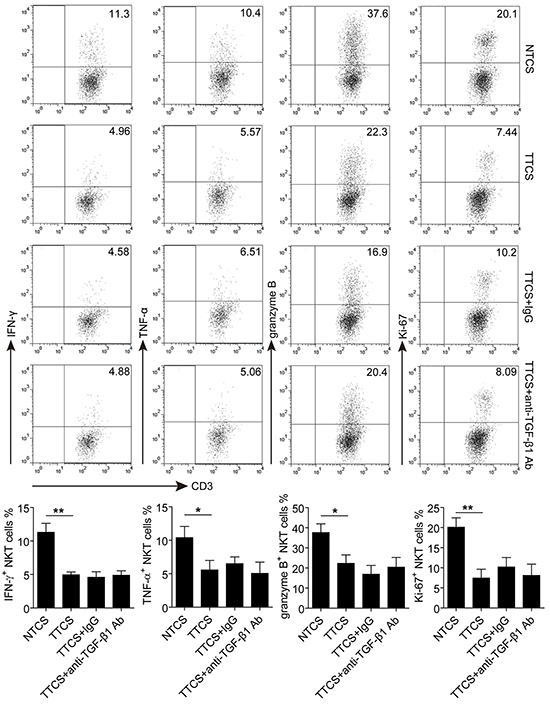 Figure 5: The functional impairment of CD3+CD56+ NKT-like cells induced by soluble factor(s) from tumor tissue culture supernatant. PBMCs from healthy individuals were cultured for 48 hours with 10% TTCS or NTCS in the presence of rhIL-2, anti-CD3 and anti-CD28 antibodies. Where indicated, 10 μg/ml anti-TGF-β1 or isotype IgG antibody was added as described in Materials and Methods. The expression of IFN-γ, TNF-α, granzyme B and Ki-67 in CD3+CD56+ NKT-like cells were determined by flow cytometry. In total, PBMCs from three healthy individuals were used to culture with TTCS and NTCS from two GC patients. *P<0.05, **P<0.01. Ab, antibody.

In conclusion, our study demonstrated that decreased tumor-infiltrating CD3+CD56+ NKT-like cells and their impaired functionality lead to immune suppression and GC progression, and unveiled that GC microenvironment may form an inhibitory milieu to impair the function of CD3+CD56+ NKT-like cells. These findings will be helpful for developing novel immune-based GC therapies.

Fresh peripheral blood, normal autologous gastric tissues (non-tumor, at least 5-cm distance from the tumor site) and tumor tissues were obtained from 63 never-treated GC patients during surgery at the Southwest Hospital of the Third Military Medical University. The clinical stages of tumors were determined according to the TNM classification system of International Union against Cancer (Edition 7). Normal blood was collected from 30 healthy individuals as the control group. The study was approved by the Ethics Committee of the Third Military Medical University, and written informed consent was obtained from each subject. The clinical characteristics of GC Patients were present in Supplementary Table S1.

Cells suspensions were stained with appropriate surface antibodies, and then fixed, permeabilized for 20 min using Cytofix/Cytoperm reagent (BD Biosciences), and subsequently stained with antibodies to intracellular molecules granzyme B and Ki-67. For intracellular cytokine staining of IFN-γ and TNF-α, the cells were stimulated for 4 hours with phorbol myristate acetate (PMA, 50 ng/ml) and ionomycin (1 μg/ml) in the presence of Golgistop before staining. The fluorochrome-labeled antibodies are listed in Supplementary Table S2.

Culturing and stimulation of PBMCs

Peripheral blood mononuclear cells (PBMCs) from healthy individuals were isolated by Ficoll density gradient centrifugation. PBMCs were seeded in the 96-well round bottom plates at 4×105 cells/well in RPMI 1640 containing 10% fetal calf serum (Gibco, Bionova, Uruguay). 20 U/ml recombinant human IL-2 (rhIL-2) was supplemented to each well pre-coated with anti-CD3 (2 μg/ml) and anti-CD28 (1 μg/ml) antibodies (Biolegend, San Diego, CA). In some experiments, 10% TTCS or NTCS was also added in the well. Where indicated, anti-TGF-β1 neutralizing antibody (10μg/ml, Abcam) or isotype control IgG antibody was added in the 10% TTCS-treated wells. After 48 hours, plated cells were collected for intracellular granzyme B and Ki-67 expression in CD3+CD56+ NKT-like cells of PBMCs. For intracellular cytokine staining of IFN-γ and TNF-α, the cells were stimulated at the last 4 hours with PMA (50 ng/ml) and ionomycin (1 μg/ml) in the presence of Golgistop before staining.

All results are summarized as mean ± standard error of the mean (SEM), and statistical analysis was performed with the Prism 5.0 Software. Differences between groups were evaluated by two-tailed Student’s t test. Cumulative survival time was measured in months and calculated by the Kaplan–Meier method. P<0.05 was considered statistically significant.