Background: The Wnt receptor Frizzled-7 (FZD7) promotes tumor progression and can be currently targeted by monoclonal antibody therapy. Here, we determined the prognostic value of FZD7 for the overall survival of glioblastoma (GBM) patients, both as individual marker and taken in combination with the previously-described markers MGMT and IDH1. Additionally, we tested whether these markers (alone or in combination) exhibited sex-specific differences.

Conclusions: Our study identifies novel individual and combination markers with prognostic and, possibly, therapeutic relevance in GBM. Furthermore, our findings substantiate the importance of sexual dimorphism in this type of cancer.

Glioblastoma (GBM) is the most common and aggressive malignant brain tumor in adults with an incidence of 0.59-3.69 cases per 100,000 person life-years [1]. The vast majority of GBM develop de novo (primary GBM); however, GBM can also evolve from lower grade gliomas (secondary GBM). Primary GBM occur more commonly in male patients whereas the reverse is the case for secondary GBM [2]. The mean age of primary and secondary GBM patients is 62 and 45 years, respectively [2]. Currently, the standard of care treatment for GBM consists of maximum safe surgical resection followed by radiotherapy plus concomitant and adjuvant chemotherapy with temozolomide [3]. Despite this aggressive therapeutic regimen, GBM patients have a very poor prognosis, with only 0.05-4.7% of patients surviving 5 years past initial diagnosis [1]. Although a large body of research addressed potential molecular markers and targets in GBM, this disease remains incurable at present. Thus, there is still an urgent need to identify novel clinicopathological factors with a superior accuracy regarding diagnosis, prognosis and therapeutic prediction in GBM patients.

Frizzled-7 (FZD7) is a member of the Frizzled family of transmembrane proteins that serve as receptors for the Wnt ligands [4]. Like other members of this family, FZD7 can bind to more than one ligand thereby activating the canonical and/or the non-canonical Wnt signaling pathways. Subsequently, a plethora of transcription factors are switched on, which are essential for modulation of important cellular functions such as proliferation, migration, polarity or differentiation [4]. Accumulating evidence indicates that aberrant activation of the FZD7/Wnt pathway promotes carcinogenesis and tumor progression. Specifically, FZD7 is overexpressed in various solid cancers (reviewed in [4]) and high levels of FZD7 associate with shorter survival of colorectal and gastric cancer patients [5, 6]. Recently, inhibition of FZD7 by the therapeutic monoclonal antibody OMP-18R5 was shown to decrease tumor growth and tumorigenicity of several human xenograft tumors [7].

The role of FZD7 in GBM is currently unknown. The objective of this study was to determine the expression and prognostic value of FZD7 in patients with primary GBM. Furthermore, we sought to identify novel strategies for a more accurate prognosis in these patients by analyzing FZD7 in combination with the previously-described markers MGMT (O-6-methylguanine-DNA methyltransferase) promoter methylation [8] and IDH1 (isocitrate dehydrogenase 1) mutation status [9]. As several studies described the sexually-dimorphic expression of cancer biomarkers including MGMT [10–12], we additionally tested whether our markers exhibited sex-specific differences in relationship to the overall survival of GBM patients.

FZD7 scoring (Figure 1A-1B) and comparison of FZD7 expression between GBM and non-cancerous brain tissues (Figure 1C-1D) are described in detail in the Material and Methods section. 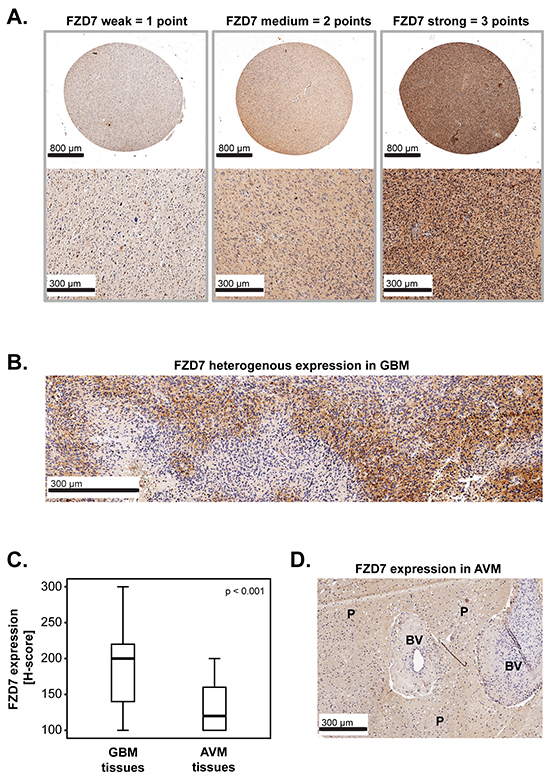 Figure 1: FZD7 in primary GBM: expression and scoring system. A-B. Representative micrographs showing (A) weak, medium or strong expression of FZD7 and (B) heterogenous expression of FZD7 in GBM tissues. Scale bars are indicated in the lower-left corner of each panel. C. FZD7 expression in GBM tissues (n=222) versus non-cancerous brain tissues (brain parenchyma from patients with arteriovenous malformations-AVM; n=52). The medians are shown as black lines and the percentiles (25th and 75th) as vertical boxes with error bars. Statistical analysis was performed with the chi-square test and the p-value is indicated in the upper right corner of the plot. D. Representative micrograph showing FZD7 expression in AVM tissues. The scale bar is indicated in the lower-left corner of the panel. BV= blood vessels; P=brain parenchyma. 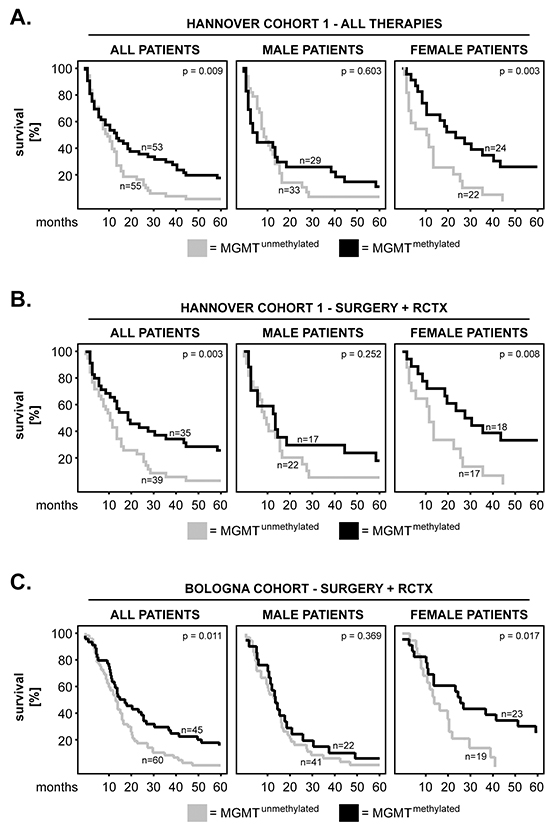 Another marker of potential relevance for the outcome of GBM patients is IDH1. Specifically, it was shown that IDH1 mutations associated with prolonged survival of GBM patients [9]. In this study we assessed the R132H mutation of IDH1 by immunohistochemistry. Figure 4A depicts examples of mutated IDH1 (positive staining; IDH1mutated) and wild-type IDH1 (negative staining; IDH1wild-type), respectively (Figure 4A). Kaplan-Meier analysis showed that IDH1mutated significantly associated with longer survival in the entire cohort of GBM patients (p=0.005; log rank) (Figure 4B). Sex-specific analysis revealed a significant association between the mutation status of IDH1 and survival in male but not female patients (p=0.016 and p=0.162, respectively; log rank) (Figure 4B). The mutation status of IDH1 was additionally assessed in the Hannover Cohort 2 patients; however this cohort did not contain any IDH1mutated specimens (data not shown). 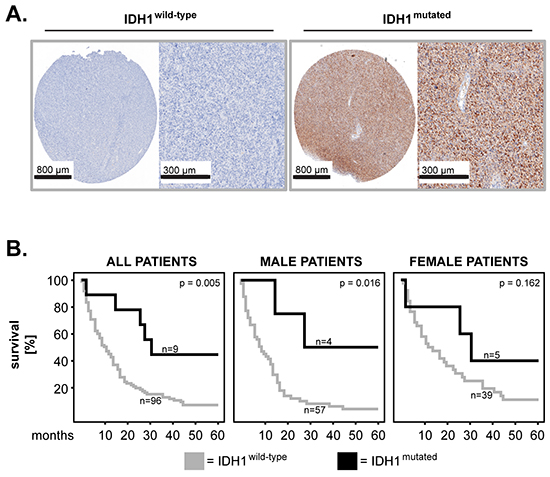 Figure 4: IDH1 mutation in primary GBM: impact on patients’ overall survival and sex differences. A. Representative micrographs showing expression of wild-type IDH1 (negative staining; left panels) and mutated IDH1 (positive staining; right panels). Scale bars are indicated in the lower-left corner of each panel. B. Kaplan–Meier 5-year survival curves were plotted for the Hannover Cohort 1 patients with mutated versus wild-type status of IDH1 and statistical testing was performed with the log-rank test.

In the final set of studies we tested the impact of FZD7 taken in combination with MGMT or with IDH1 on the survival of GBM patients. To this end we combined the phenotypes which, in single marker analysis, associated with the longest and the shortest survival, respectively. Thus, we compared FZD7lowMGMTmethylated with FZD7highMGMTunmethylated and FZD7lowIDH1mutated with FZD7highIDH1wild-type. We found that the FZD7highMGMTunmethylated phenotype significantly associated with shorter survival in the entire cohort of patients (p<0.001; log rank) (Figure 5A). Notably, this association was significant in both male (p=0.001; log rank) and female (p=0.002; log rank) GBM patients (Figure 5A). Furthermore, multivariate analysis showed that the FZD7highMGMTunmethylated phenotype significantly predicted poor survival in all groups of patients (Figure 5B). 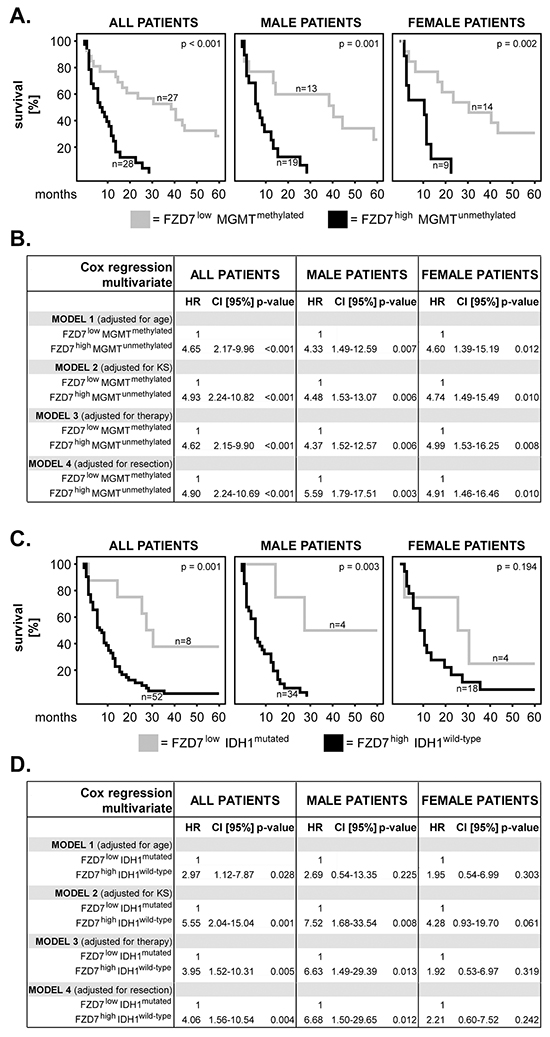 This is the first report showing that high expression of FZD7 significantly associates with shorter overall survival of GBM patients and predicts poor survival of these patients. FZD7 might, therefore, serve as an independent prognostic biomarker in primary GBM. Notably, FZD7 can be inhibited by the therapeutic monoclonal antibody Vantictumab (OMP-18R5) which showed potent anti-tumor effects in murine xenograft studies [7] and is currently being tested in clinical trials for various solid cancers. Hence, FZD7 may also represent a novel therapeutic target in GBM patients.

Interestingly, the association between FZD7 expression and patients’ survival displayed sex differences, as high levels of FZD7 significantly associated with shorter survival only in male GBM patients. Sex differences were also observed for the other two markers analysed in this study - MGMT and IDH1. Apart from the higher incidence rate of primary GBM in male patients [1], little is known about the role of sexual dimorphism in GBM. Very recent evidence indicates, however, that sexual dimorphism might significantly modulate the biology of GBM. For instance, astrocytes derived from male NF1−/− DNp53 mice (mesenchymal GBM model) exhibited higher proliferation and colony-forming abilities ex vivo, as well as enhanced tumorigenesis in vivo compared to astrocytes derived from their female counterparts [14]. Colen and co-workers found that GBM tumors from male patients had increased necrosis than those from female patients [15]. Further transcription factor analysis showed that tumor cell death associated with MYC in female patients and with TP53 activity in male GBM patients [15]. Together with our own studies, these findings suggest that sexual dimorphism is an important factor in the pathophysiology of GBM, which should most likely be taken into consideration in the management of this disease.

Accumulating evidence indicates that combined analysis of multiple markers has superior prognostic value compared to analysis of individual markers [16–19]. Here, we combined FZD7 with MGMT or IDH1, as these markers were shown to associate with the survival of GBM patients in previous [8, 9] and present (Figures 3-4) studies. We found that FZD7/MGMT combination was a strong independent predictor of poor survival in GBM patients, with twice as high hazard ratios compared to FZD7 alone. Notably, this combination of markers also abrogated the sex differences observed upon single marker analysis. Thus, combining FZD7 with MGMT might be a good strategy for an accurate prognosis in primary GBM patients. Combination of FZD7 with IDH1 revealed considerably higher hazard ratios in male patients compared with FZD7 alone, but lost its significance when adjusted for age. This phenomenon might be a consequence of the high prevalence of mutated IDH1 in younger GBM patients [20, 21]. Furthermore, the 95% confidence intervals were very wide (probably because of the scarcity of IDH1 mutated cases) and no IDH1 mutations were found in a second cohort of primary GBM. These findings are in agreement with previous studies showing that IDH1 mutations in primary GBM are rare [22, 23] and, therefore, warrant much larger patient cohorts for validation.

In summary, our study identifies novel individual (FZD7) and combination (FZD7/MGMT) prognostic markers and substantiates the importance of sexual dimorphism in GBM. These findings contribute to a better understanding of GBM pathophysiology and might ultimately foster the development of novel therapeutic strategies against this type of cancer.

Additionally, FZD7 expression was tested on tissues from patients with brain arteriovenous malformations (AVM) (n= 52). These studies were approved by the ethics committee of the Medical School Hannover as well.

Expression of FZD7 was determined by immunohistochemistry using tissue microarrays (TMAs) from patients with primary GBM. The expression intensity of FZD7 was categorized as weak, medium and strong and was assigned 1, 2 and 3 points, respectively (Figure 1A). As a number of samples exhibited heterogeneous staining (Figure 1B), FZD7 expression was graded using the H-score according to the formula: (1 × x)+(2 × y)+(3 × z), where x + y + z =100% of the tumor area.

Additionally, FZD7 expression was determined in non-cancerous brain tissues (brain parenchyma from AVM patients) using the same scoring system as above. The results demonstrated that the levels of FZD7 were significantly higher in GBM tissues compared to AVM tissues (p<0.001; chi-square) (Figure 1C). A representative example of FZD7 expression intensity in AVM tissues is shown in Figure 1D.

For the Bologna cohort, the MGMT promoter methylation analysis was performed exactly as described previously [26].

Clinical data were analyzed with the SPSS statistical software version 18.0 (SPSS Inc, Chicago, IL, USA). Differences in FZD7 expression between GBM and AVM tissues were determined using the chi-square test. Survival curves (5-year or 2-year cutoff) were plotted according to the Kaplan–Meier method. Significance was initially tested by univariate analysis using the log-rank test. Multivariate analysis was used to determine the prognostic value of selected variables using Cox’s proportional hazard linear regression models adjusted for age, Karnofsky scale (KS), therapy and extent of surgical resection, as these factors are known to influence the prognosis of GBM patients. In all studies, the level of significance was set at p ≤ 0.05.