Although nervous and vascular systems are functionally different, they usually share similar mechanisms for function maintenance. Neurovascular dysfunction has became the pathogenesis of several vascular and nervous disorders. Here we show that long non-coding RNA-MIAT is aberrantly expressed under neurovascular dysfunction condition. MIAT is shown as a regulator of vascular dysfunction, including retinal angiogenesis, corneal angiogenesis, and vascular permeability. MIAT is also shown as a regulator of retinal neurodegeneration under diabetic condition. Mechanistically, MIAT regulates neural and vascular cell function via MIAT/miR-150-5p/VEGF network. The eye is a valuable model to study central nervous system (CNS) disorders. We show that MIAT knockdown leads to cerebral microvascular degeneration, progressive neuronal loss and neurodegeneration, and behavioral deficits in a CNS neurovascular disorder, Alzheimer's disease. MIAT may represent a pharmacological target for treating neurovascular-related disorders.

Nervous and vascular systems are anatomically closely tied to each other. The nerves are often vascularized by vasa nervorum to supply oxygen and nutriment, whereas the vascular is often innervated by nerve fibers that regulate vascular tone. Nerves and blood vessels usually share similar mechanisms and regulators for function maintenance [1, 2]. Abnormal neurovascular interactions have been reported in several human diseases, such as stroke, brain injury, and retinopathy, and cancer [3]. Thus, clarifying the potential mechanism of neurovascular interaction would provide novel strategies for treating neurovascular dysfunction.

Long non-coding RNAs (lncRNAs) are pervasively transcribed in mammalian genome, which are defined as non-coding transcripts > 200 nucleotides. LncRNAs participate in numerous biological processes to regulate gene expression through mRNA splicing, transcription regulation, translation regulation, and genomic imprinting [4]. Abnormal lncRNA expression has been found in many human disorders ranging from neurodegeneration to cancer [5, 6]. The homeostasis and plasticity of neurovascular interaction is required for exquisite gene regulatory mechanism. Given the crucial role of lncRNAs in gene regulation, it is not surprised that lncRNAs are potential regulators of neurovascular interaction.

In previous study, we revealed a key role of lncRNA-MIAT in diabetes mellitus-induced microvascular dysfunction [7]. MIAT is expressed both in the human and mouse genome. The genomic information of MIAT in human and mouse have been reported [8]. Vascular and nervous systems are highly interactive in both physiological and pathological conditions and often share the common regulators for function maintenance [2]. We speculated that MIAT was also a critical regulator of neurovascular interaction. Here we revealed that MIAT was aberrantly expressed during neurovascular dysfunction. MIAT knockdown affected the development of vascular and neuronal degeneration. Thus, MIAT is a promising therapeutic target for treating neurovascular dysfunction-related diseases. 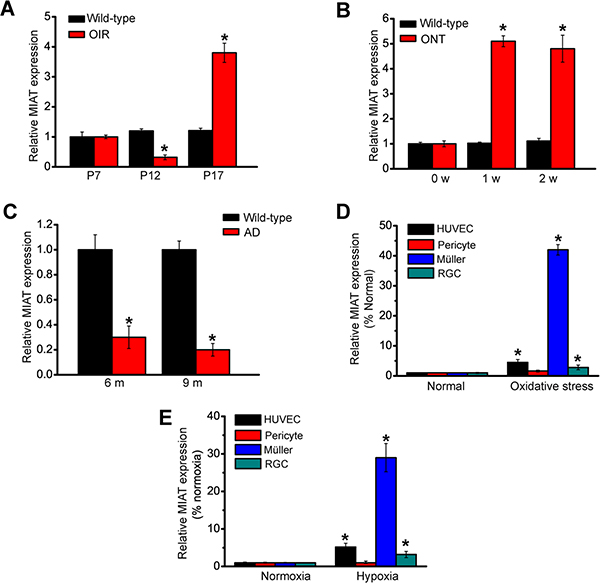 Figure 1: MIAT is aberrantly expressed during neurovascular dysfunction. (A) Neonatal mice were exposed to 75% oxygen from P7 to P12, and then returned to room air. qRT-PCRs were conducted to compare MIAT expression between wild-type and OIR retinas (n = 6 animals per group). (B) qRT-PCRs were conducted to detect MIAT levels in rat retinas of 0, 1, and 2 weeks after ONT (n = 6 animals per group). (C) qRT-PCRs were conducted to compare MIAT expression in the brain parenchyma between wild-type and Alzheimer’s disease transgenic mice (n = 6 animals per group). (D, E) Human umbilical vein endothelial cells (HUVEC), primary pericytes, primary rat retinal ganglion cells (RGCs), and retinal Müller cell line (rMC-1) was exposed to H2O2 (50 μm, n = 4), or hypoxia (CoCl2, 200 μm, n = 4) for 24 h. MIAT expression was detected by qRT-PCRs. *P < 0.05. All data were from three independent experiments.

MIAT is an important regulator of vascular remodeling

We employed retinal vascular development model to investigate the role of MIAT in vascular remodeling in vivo. MIAT knockdown displayed a significant delay in radial extension of vascular plexus from optic nerve to periphery at postnatal days 4 (P4) and P7, as well as fewer branch points (Figure 2A). MIAT knockdown retinas had fewer tip cells and filopodia (Figure 2B). 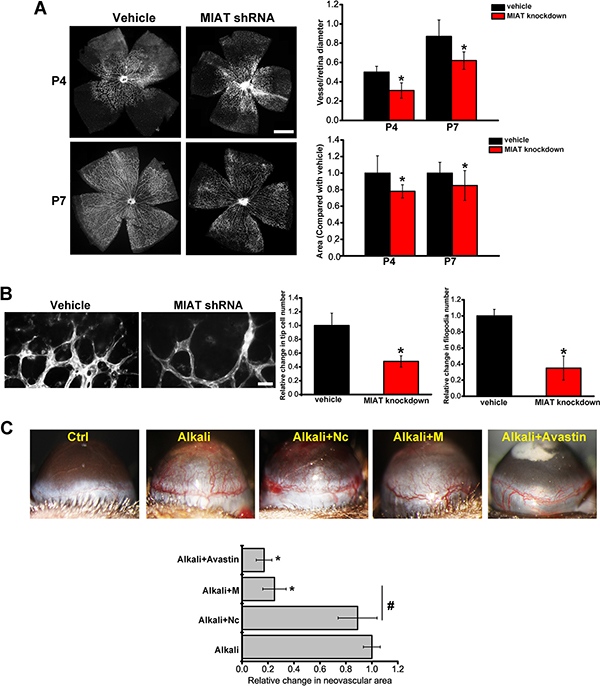 Figure 2: MIAT is an important regulator of vascular remodeling. (A) The retinas of C57B/6 mice were injected with vehicle or MIAT shRNA for 4 d or 7 d. Isolectin B4 staining and quantification of vascuarization was conducted (n = 6 animals per group). Scale bar, 500 μm. (B) Isolectin B4 stained tip cells and filopodia at P7 and quantification of tip cells and filopodia number was conducted. Scale bar, 50 μm. (C) C57B/6 mice were received alkali-burn on the central corneas of their eyes, and treated as shown for 48 h. On day 4, corneal neovasculature was monitored by slit lamp and quantified (n = 6 animals per group). *P < 0.05. All data were from three independent experiments.

We also employed corneal neovascularization model to study the role of MIAT in vascular remodeling. Corneal neovasculature extended from the lumbus toward the pellets after alkali-burn. Notably, MIAT knockdown significantly decreased alkali-burn-induced angiogenesis, which was comparable to Avastin (anti-VEGF) treatment in C57B/6 mice (Figure 2C).

MIAT is shown as a regulator of retinal neurodegeneration

Nervous and vascular systems usually share the common regulator for function maintenance. Since MIAT was shown as a regulator of vascular remodeling, we speculated that MIAT was also involved in retinal neurodegeneration. Immunofluorescence staining showed that compared with diabetic group, MIAT knockdown significantly attenuated reactive gliosis as shown by decreased glial fibrillary acidic protein (GFAP) and vimentin (markers of Müller glial cells) staining (Figure 3A and 3B). MIAT knockdown decreased the number of NeuN- or TUBB3-positive RGCs. These results indicate that MIAT regulates reactive gliosis and RGC survival (Figure 3C and 3D). 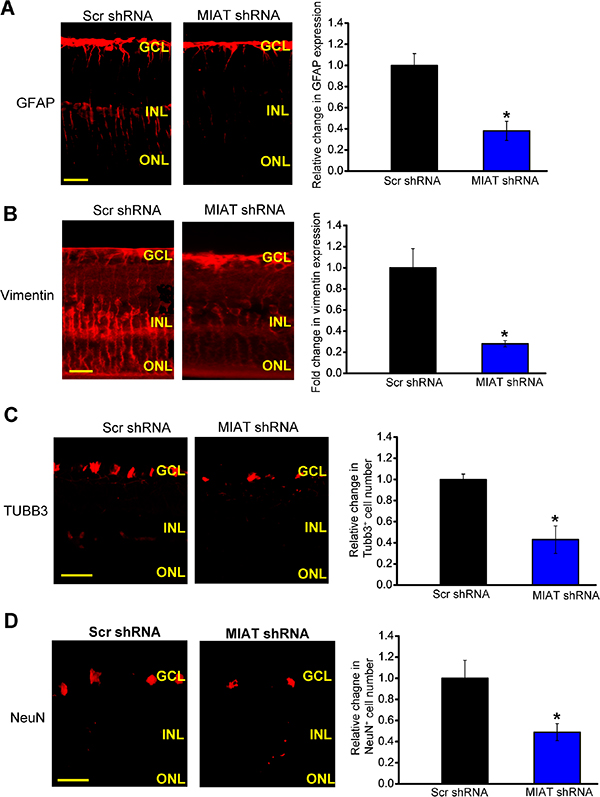 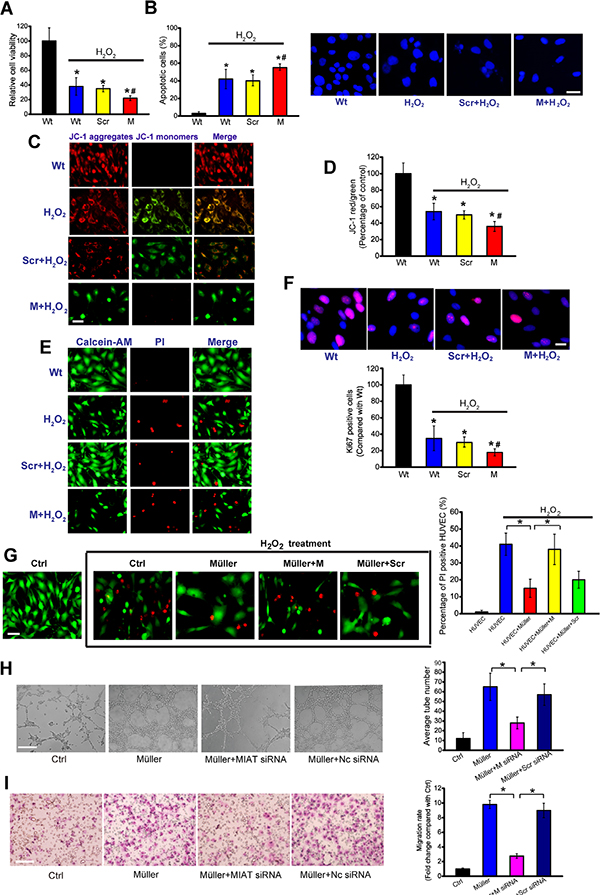 MIAT regulates the production of neurotrophic and angiogenic factors 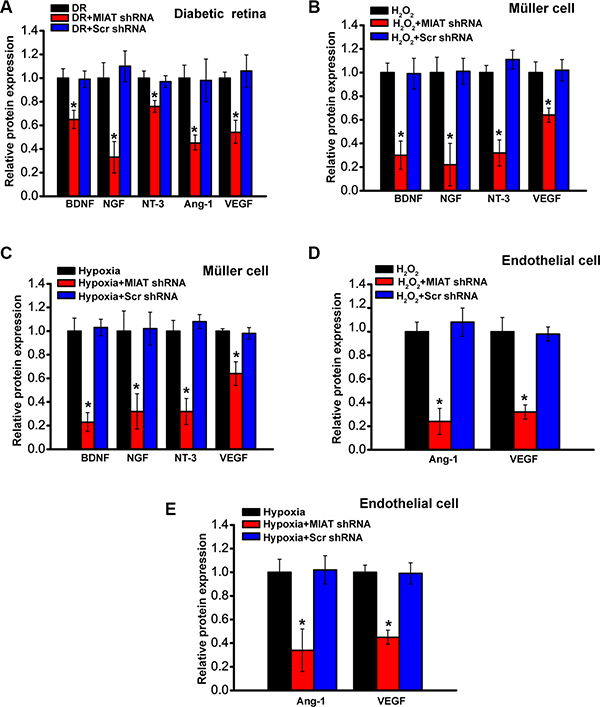 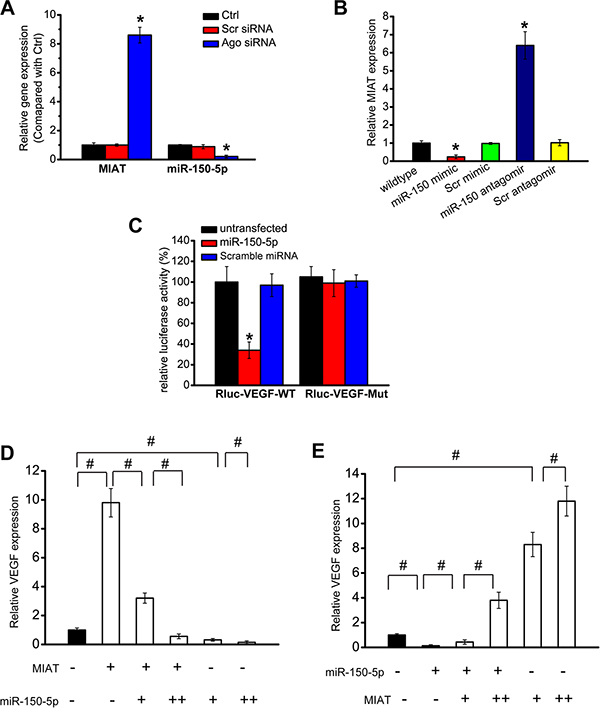 We also determined the role of MIAT in vasculo-neuronal dysfunction in Alzheimer’s disease. Intrahippocampal injection of MIAT shRNA was conducted to down-regulate MIAT levels. Immunostaining for tight junction proteins, occludin and zonula occludens-1 (ZO-1), each combined with isolectin B4 staining, indicated that MIAT knockdown significantly decreased brain microvessel number and the expression of tight junction proteins (Figure 7A and 7B). 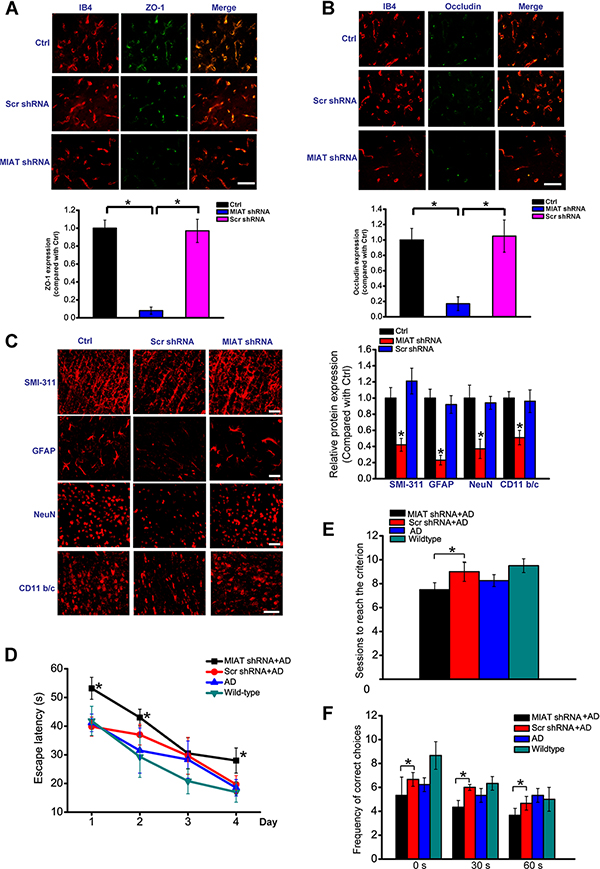 To investigate whether MIAT knockdown affects the learning and memory impairment in APP/PSN mice, MIAT shRNA was injected into the hippocampus at the age of 8 months when full-blown amyloid plaque pathology had already developed. Spatial learning experiment revealed that MIAT knockdown mice showed a significant impairment in spatial learning ability as shown by longer time of escape latency compared with AD or AD+Scr shRNA injected mice (Figure 7D). We next tested the ability of animals to learn spatial alternation using T-maze apparatus to gain a reward. A significant statistical difference in the number of sessions to reach the learning criterion was detected between MIAT shRNA-injected and Scr shRNA-injected group (Figure 7E). MIAT shRNA-injected group showed decreased spatial delayed alternation (Figure 7F). These results indicate that MIAT knockdown exacerbates learning and memory impairment in APP/PSN mice.

Blood vessels and nerves are functionally interdependent. Dysfunction of their cross-talk has become the pathogenesis of several human disorders [9]. Here we showed that lncRNA-MIAT was involved in the maintenance of proper microvascular and nervous function. MIAT regulated the function of neural and vascular cells through MIAT/miR-150-5p/VEGF network. MIAT knockdown also led to cerebral microvascular degeneration, progressive neurodegeneration, and behavioral deficits, suggesting a crucial role of MIAT in the pathogenesis of neurovascular dysfunction.

We previously reveal that MIAT functions as a ceRNA to regulate VEGF levels by sponging miR-150-5p in retinal endothelial cells. MIAT overexpression is a sink for miR-150-5p, thereby affecting the derepression of VEGF [7]. Here we found a similar regulatory mechanism in Müller cells. VEGF can be released from Müller cells under stress condition, such as hypoxic condition [14–16]. VEGF supports the survival of retinal endothelial cells and neurons, and restricts glucose- or oxidative stress-induced injuries. The protective effects of VEGF include vasodilation, glial cell proliferation, inflammation, and neuroprotection [17, 18]. MIAT overexpression released miR-150-5p repressive effect on VEGF. This regulatory loop maintained a relative balance for glia function, and indirectly regulated RGC and endothelial cell function, to resist external stress.

The eye is an extension of the brain. It displays several similarities to the brain in terms of anatomy, functionality, and stress tolerance [19]. Some neurodegenerative processes in CNS disorders can be detected in some ocular pathology [20]. We showed that MIAT was implicated in the vasculo-neuronal dysfunction and degeneration in Alzheimer’s disease. MIAT knockdown led to endothelial cell injury and cerebral microvascular dysfunction. The delivery of oxygen and nutrients to other part of the body could be affect, which in turn lead to neuronal dysfunction, such as the retraction of neurites, neuronal loss and substantial behavioral deficit. Neuronal dysfunction in MIAT knockdown mice likely reflected synergistic effects of MIAT-mediated vascular injury, diminished neuronal glucose delivery and greater accumulation of Aβ neurotoxic species.

The interactions among multiple cells including neuronal, glial, and vascular cells, are critical for maintaining adequate blood flow that is necessary for normal tissue function. Neurovascular dysfunction would become the pathogenesis of human diseases, such as retinopathy, stroke and Alzheimer’s diseases [21]. Our findings demonstrate that MIAT is a critical regulator of vascular integrity and neuronal function. MIAT may represent a therapeutic target for treating neurovascular injury and the resulting neuronal dysfunction.

Four-month old male C57BL/6 mice were anesthetized with isoflurane (4% vol/vol) followed by topical application of 0.1% proparacaine on the cornea. A 2.5 mm diameter filter paper soaked with 0.1 M NaOH was placed on the central cornea for 30 s, followed by immediate rinsing with 0.9% saline solution for 10 s. Areas of corneal neovascularization were determined using Image J software package The neovascular area was determined by subtracting non-stimulated vascular area from vascular area [23].

The effect of MIAT knockdown on spatial learning and memory was assessed by water maze [24, 25]. Briefly, mice had 3 day of pre-training to climb the escape platform after which they underwent a 4-day testing phase with a submerged platform (10 × 10 cm) in a black pool filled with water. During the procedure, the platform location was kept constant, and the starting points were changed between four constant locations. The acquisition phase (days 1–4) consisted of 4 trials in which the mice had a maximum of 60 s to find the platform. If the animal did not find the platform during a period of 60 s, it was gently guided to it. The animal was allowed to remain on the platform for 30 s and then moved to the next initial position without leaving the tank. The time to find the platform was recorded.

Spatial alternation training and delay test were performed in the T-maze apparatus [24]. Each daily session consisted of 10 trials. On the first trial of each session, both goals were baited with peanuts. For the next 9 trials, the reward was placed in the arm opposite to that chosen by the mouse on the previous trial. The criterion for successful completion of training was defined as 80% correct turns averaged over 2 consecutive days. Once the criterion was reached, spatial delayed alternation was tested by interposing 30- or 60-s delay between trials. Each delay was used for 2 consecutive days.