Heightened co-expression and dysregulated signaling associated with Toll-like receptor 3 (TLR3) and Wnt5a is an integral component of solid tumors and hematological malignancies. Our previous findings in pancreatic cancer and melanoma suggest that inhibition of these pathways by a TLR3 signaling inhibitor, phenylmethimazole (C10), results in significantly decreased IL-6 levels, STAT3 phosphorylation, minimal cancer cell migration and reduced cancer cell growth in vitro and in vivo. In this study, we extended our earlier observations by performing studies in human breast cancer cells. We found that human MCF-7 breast cancer cells express high basal levels of TLR3 and Wnt5a RNA. C10 treatment resulted in significantly decreased TLR3 and Wnt5a expression levels. This functionally translated into significantly reduced IL-6 levels and STAT3 phosphorylation in vitro. In addition, the inhibition of this signaling cascade by C10 further resulted in decreased cell viability and migration of MCF-7 cells. Strikingly, the combination of C10 and tamoxifen, the standard of care therapy for breast cancer, further decrease cancer cell growth better than either agent alone. These data support the novel finding that inhibition of TLR3 signaling in combination with tamoxifen, may increase the effectiveness of current treatments of breast cancer.

Extensive research from in vitro, in vivo and clinical studies has now established that Toll-like receptors (TLRs) are important in the development of carcinogenesis and tumor progression of a variety of cancers. Indeed, heightened expression of TLRs is evidenced in multiple cancer cell lines, and in tumor cells and tissues obtained from patients [1–3]. Furthermore, activation of TLRs on cancer cells promotes chronic inflammation which stimulates cancer cell proliferation, migration, tumor angiogenesis and creates a tumor microenvironment which impairs the anti-tumor function of the immune system allowing tumors to develop and survive [4].

Much like TLRs, the Wnt family proteins have also been implicated in carcinogenesis - in both the initiation and maintenance of cancer [5–7]. In vitro studies with various cancer cell lines and tumor specimens from patients have revealed elevated expression of Wnt proteins (e.g., Wnt5a) and deregulated Wnt signal transduction pathways [5, 8–11]. The elevated expression of Wnt proteins (e.g., Wnt5a) in tumor samples correlates with advanced stages and poor prognosis in solid tumors as well as hematological malignancies [5, 8–11].

The TLR-mediated pro-inflammatory cytokine, IL-6, is another integral molecular effector of initiation and growth of malignant tumors. This pro-inflammatory cytokine is implicated in a milieu of cancer types because of its propensity to drive the activation of the oncogenic transcription factor signal transducer and activator of transcription 3 (STAT3). By virtue of interacting with other transcription factors (e.g., NF-B), STAT3 is known to mediate crosstalk between tumor cells and inflammatory cells within the tumor microenvironment and promote the development and progression of multiple types of human cancers [12–17]. The expression of STAT3 and presence of its active form (i.e., phosphorylated form) is increased in tumor tissues from patients and this pronounced expression indicates a poor prognosis in a variety of cancers [18].

Although much fundamental, translational and clinical research has been conducted on TLRs, Wnts and IL-6/STAT3, the majority of the investigations have studied these cardinal mediators of oncogenesis in “isolation”. Only recently has there has been an increasing interest in “co-associating” and tying these aforementioned oncologic mediators together. An IL-6/STAT3/Wnt5a signaling loop has been described by different groups [19, 20]. Our group demonstrated that IL-6, a TLR signaling product, can activate STAT3 with resulting overexpression of Wnt5a in human papillary thyroid carcinoma, melanoma and pancreatic cancer [1, 2]. Importantly, a novel inhibitor of pathologic TLR3 signaling, phenylmethimazole (C10), has the ability to block IL-6 production, as well as decrease viability/growth and migration in these same cancers [2, 20]. We hypothesized that the effect of C10 on viability/growth and migration of these cancers was related to its suppressive effect on TLR3 signaling which led to the inhibition of TLR-mediated STAT3 and Wnt5a signaling [20]. Moreover, in these reports we showed that C10 also inhibited tumor growth in mouse xenograft models of human pancreatic cancer and malignant melanoma thus indicating the potential of using a TLR inhibitor for the treatment of TLR-expressing cancers [2]. In this present study, we sought to extend our earlier observations of TLR3 and Wnt5a association and their role in tumor viability/growth and migration in human breast cancer. We also evaluated the ability of C10 to synergistically inhibit tumor cell viability/growth in combination with tamoxifen, the current standard of care therapy for breast cancer.

IL-6 is a pro-inflammatory cytokine regulated by TLR3 and has been shown to be important for the growth and migration of cancer cells [21–23]. It has also been shown to be an activator of a key oncogene, STAT3, known to mediate uncontrolled cell growth in many types of human cancers [24]. STAT3 is phosphorylated on multiple residues for activation; phosphorylation of both its tyrosine 705 (pSTAT3Y705) and serine 727 (pSTAT3S727) residues are necessary for maximal transcriptional activity [25–28]. Based on our previous findings that C10 significantly reduced IL-6 protein levels and STAT3 phosphorylated via TLR3 signaling in other cancers, we also evaluated these in MCF-7 breast cancer cells. IL-6 protein levels were analyzed via ELISA. We observed significantly reduced (> 90%) IL-6 protein levels following C10 treatment of MCF-7 cells (Figure 2A). Additionally, we observed a significant decrease in IL-6-induced phosphorylated STAT3Y705 in MCF-7 (Figure 2B). Of note, C10 did not affect STAT3S727 phosphorylation thus reflecting individual variations of STAT3 phosphorylation among different cancers (data not shown). These data, along with results shown in Figure 1, indicate that the constitutive levels of TLR3 are abnormally high in MCF-7 cells and that downstream signaling (Wnt5a, IL-6 and STAT3) can be inhibited by C10. 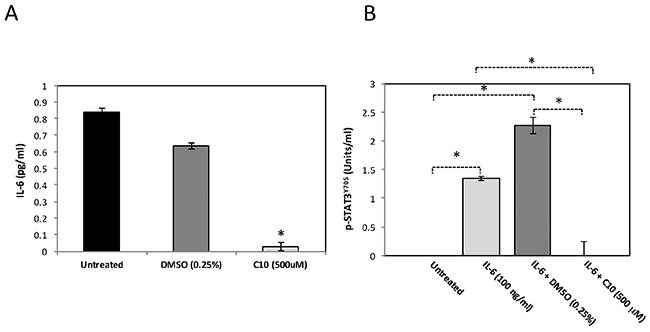 In addition to its effect on constitutive TLR3, Wnt5a levels and subsequent IL-6 production and STAT3 levels/activation, we then evaluated the ability of C10 to inhibit the migration and viability/growth of MCF-7 breast cancer cells. In a scratch assay, cell migration to cover a scratched area on the plate surface containing cells is measured; retention of a visible scratch line as in Figure 3A is evidence of inhibition of cell migration [5]. Treatment of MCF-7 cells with C10 led to significant inhibition of motility/migration as measured using scratch assays at 0, 24 and 48 hours (p < 0.05) (Figure 3A & 3B). 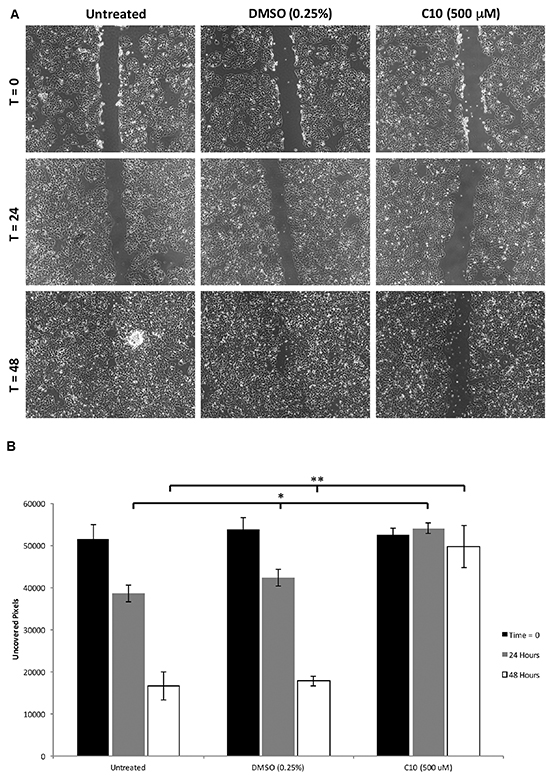 Figure 3: C10 significantly inhibits MCF-7 migration. MCF-7 cells were grown to confluency and migration was analyzed using a scratch assay. After the scratch was performed, cells were treated with 500 μM C10 or vehicle control (0.25% DMSO) for 0, 24 and 48 hours. A. Representative images of the scratch assay depicting inhibition of migration of MCF7 cells after C10 treatment. B. Quantification of cells between each treatment group at 0, 24 and 48 hours. C10 significantly (*p < 0.05) inhibits cell migration when compared to DMSO control and untreated groups. Results presented are representative of at least n = 3 separate experiments. 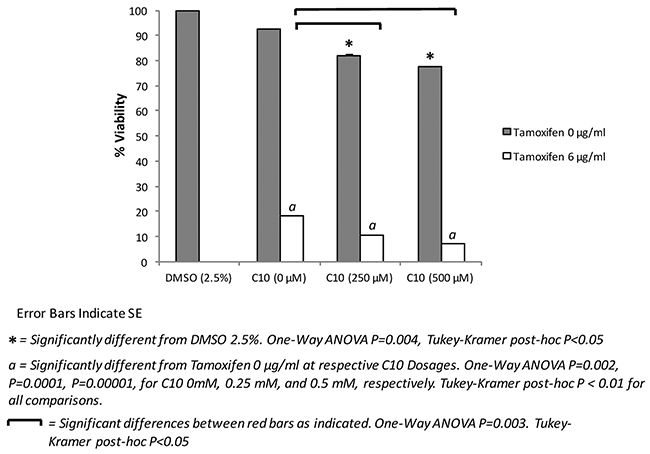 A significant number of women across different geographies are afflicted with breast cancer. Estrogen plays a critical role in pathology of the vast majority of these breast cancers. Accordingly, patients are treated with anti-estrogen therapies (e.g., tamoxifen). However, these anti-estrogen therapies have their limitations: (i) some patients have inadequate response to these therapies and (ii) patients can develop resistance to these therapies – eventually relapsing. Hence, there remains a significant unmet medical need to develop better and novel therapeutics (monotherapy or combination therapy) for this common disease.

Recent studies have highlighted the important pathologic role of TLR3 and Wnt5a in progression, sustenance and metastasis of breast cancer [30, 31]. Our group has identified phenylmethimazole (C10), an inhibitor of pathologic TLR3 signaling/expression, and shown that C10, by virtue of inhibiting the TLR3/Wnt5a pathway is significantly efficacious in in-vitro and in-vivo models of different cancers and auto-immune diseases [1, 2, 32, 33]. Accordingly, in this study, we sought to further investigate the effects of C10 on human breast tumor cells alone and in combination with standard of care therapy, tamoxifen. Our results demonstrate that C10 inhibits TLR3 and Wnt5a mRNA expression in MCF-7 breast cancer cells. Subsequently, C10 significantly reduced IL-6 protein levels as well as downstream STAT3Y705 phosphorylation. Functionally, the inhibition of this signaling pathway translates into the inhibition of viability/growth and migration of the MCF-7 breast cancer cells. These observations are in-line with our previous studies examining the inhibition of TLR3 signaling with C10 in various other TLR-expressing cancers and the importance of TLR3 signaling modulation as a potential therapeutic target for breast cancer [1, 2, 34].

Although this current study, as well as previously published data, revealed viability/growth inhibition of various tumor cell lines with a TLR signaling inhibitor, we furthered these experiments to investigate the potental combinational use of a TLR signaling inhibitior with a currently FDA-approved drug used to treat breast cancer, tamoxifen. Strikingly, we observed that C10 in combination with tamoxifen synergistically enhanced the cytotoxic potential of tamoxifen by more than 50% when compared to tamoxifen therapy alone. These data suggest that a TLR3 inhibitor alongside tamoxifen, and potentially other existing ER therapies, may be a potential novel therapeutic approach to enhance current standard of care therapies. Future studies need to be conducted in vivo to determine if this combination could be applicable in the clinic.

Human recombinant IL-6 and pSTAT3Y705 ELISA kits were from Life Technologies (Grand Island, NY). For the measurement of IL-6, cells were treated for 24 hours with 500 μM C10 or DMSO (0.25%) for 24 hours. Supernatants were collected and IL-6 levels were evaluated using the human IL-6 ELISA kit as per the manufacturer’s instructions. For detection of pSTAT3Y705, cells were pre-treated with 500 μM C10 or DMSO (0.25%) for 1 hour and then stimulated with 100 ng/mL human recombinant IL-6 for ten minutes. Nuclear proteins were then collected using the NE-PER kit from ThermoFisher Scientific (Waltham, MA) as per the manufacturer’s instructions. Nuclear protein was then used to determine pSTAT3Y705 levels via the pSTAT3Y705 ELISA kit as per the manufacturer’s protocol.

MCF-7 cells were evenly seeded and grown on sterile 96-well plates. Cells were then treated with C10 (0, 250, or 500 μM), DMSO (0.25%), or tamoxifen (6 μg/mL; Sigma Aldrich) alone or in combination for 72 hours. Cell viability/growth was then quantified using the MTT-based In Vitro Toxicology Assay Kit from Sigma-Aldrich (St. Louis, MO).

Scratch assays were performed as previously described [1, 2]. Briefly, MCF-7 cells were grown to confluency and a scratch was made in the confluent layer of cells using a sterile pipette tip. In some instances the cells were treated with C10 (500 μM) or 0.25% DMSO. Scratch assays were documented after 24 and 48 hrs using digital photography. ImageJ (NIH) was used to analyze 3 separate images of each treatment group to quantify cellular migration.

All experiments were replicated at least three times on different groups of cells. All data are expressed as mean ± SD. Statistical significance was evaluated using a one-way ANOVA, and statistical significance for comparison of means between different groups was calculated using the Tukey-Kramer multiple comparison post hoc analysis using NCSS software. The differences were considered significant at p values < 0.05 as indicated in the figure legends.