Breast cancer is one of the most common female cancers, with approximately 521,900 women dying of breast cancer annually [1]. Endocrine therapies are an established treatment for postmenopausal women with hormone receptor-positive advanced breast cancer (estrogen receptor [ER]-positive and/or progesterone receptor [PgR]-positive) [2, 3]. Given that many patients eventually experience disease progression in this setting, non-cross-resistant endocrine therapies are required to provide optimal disease control throughout the treatment cascade [4].

Fulvestrant is a selective ER degrader that binds to and blocks the ER, and increases ER degradation [5]. Fulvestrant was originally approved at a dose of 250 mg/month following global registration studies that demonstrated that fulvestrant 250 mg was at least as effective as anastrozole for the treatment of advanced breast cancer in postmenopausal women with disease progression following prior endocrine therapy [6, 7]. Furthermore, fulvestrant has been shown to induce a response in tumors which have developed resistance to antiestrogen and aromatase inhibitor therapies [4, 8–10].

In China, a registration trial confirmed that fulvestrant 250 mg is effective in postmenopausal women, which led to its approval for the treatment of postmenopausal women with ER-positive locally advanced or metastatic breast cancer and disease relapse during or after adjuvant antiestrogen therapy or disease progression during antiestrogen therapy [13]. The current study was therefore designed to compare the efficacy and safety of fulvestrant 500 mg vs 250 mg in a Chinese population. 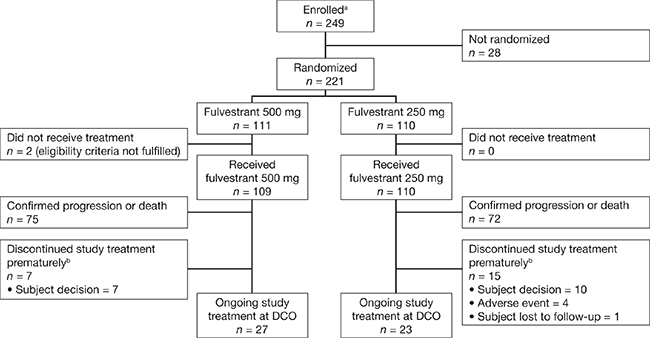 The evaluable-for-response analysis set included 57 patients in the fulvestrant 500 mg group and 66 patients in the 250 mg group with ≥ 1 target lesion at baseline. A total of 121 patients (55%) had received antiestrogen therapy as their last endocrine therapy prior to randomization, while 100 (45%) had received aromatase inhibitor therapy (Table 1). Demographic and baseline characteristics were balanced between the fulvestrant 500 mg and 250 mg groups (Table 1), and were consistent with those in the international CONFIRM study [11].

aPatients may appear under more than one previous treatment modality. 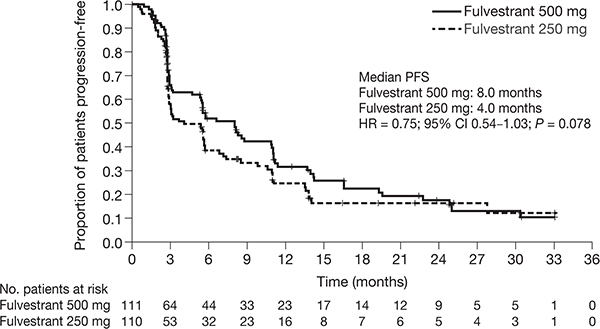 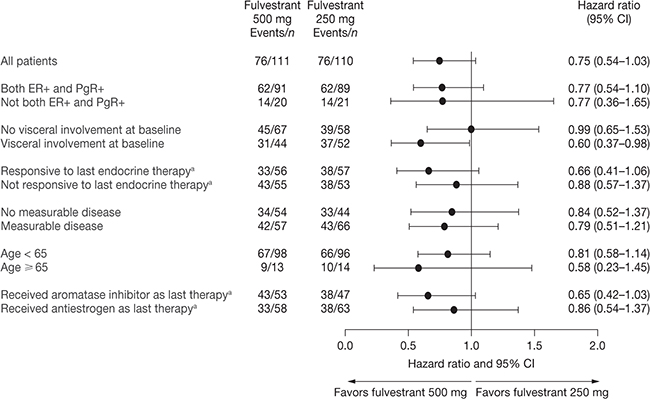 Data from the present study support the superior clinical benefit of fulvestrant 500 mg vs 250 mg in postmenopausal Chinese women with ER-positive locally advanced or metastatic breast cancer. The study was not powered to detect significant differences between treatment groups; results met the predefined criterion for consistency with the international CONFIRM study (HR < 1 for the treatment comparison of PFS).

Recent clinical trials have shown that endocrine therapy in combination with targeted therapies can improve PFS compared with endocrine therapy alone. Data from the phase III BOLERO-2 trial, comparing everolimus and exemestane vs exemestane and placebo in patients with hormone receptor-positive, human epidermal growth factor receptor type 2 (HER2)-non-amplified advanced breast cancer who had recurrence or progression while receiving previous therapy with a non-steroidal aromatase inhibitor in the adjuvant setting or to treat advanced disease (or both), reported a marked PFS advantage for the combination; median PFS was 6.9 months with everolimus plus exemestane and 2.8 months with placebo plus exemestane, according to assessments by local investigators (HR for progression or death = 0.43; 95% CI 0.35–0.54; P < 0.001). Combination therapy was associated with a higher incidence of AEs than exemestane alone [14]. TAnDEM, a randomized phase III study comparing anastrozole with or without trastuzumab in postmenopausal women with HER2/hormone receptor-positive metastatic breast cancer (previous treatment with tamoxifen as adjuvant or hormonal therapy for metastatic breast cancer or anastrozole if begun up to 4 weeks before random assignment was permitted) indicated that the combination arm experienced significant improvements in PFS compared with patients receiving anastrozole alone (HR = 0.63; 95% CI 0.47–0.84; median PFS 4.8 vs 2.4 months; P = 0.0016), although AEs and serious AEs were more frequent with the combination [15]. Data from the phase III PALOMA-3 trial, comparing fulvestrant 500 mg plus palbociclib vs fulvestrant 500 mg alone in the second-line or subsequent setting in postmenopausal women (or pre- or perimenopausal women receiving goserelin) with advanced hormone receptor-positive, HER2-negative breast cancer that had relapsed or progressed during prior endocrine therapy, reported a marked PFS advantage for the combination; the median PFS was 9.2 months with palbociclib plus fulvestrant and 3.8 months with placebo plus fulvestrant (HR for disease progression or death = 0.42; 95% CI 0.32–0.56; P < 0.001). The median PFS for fulvestrant 500 mg alone was shorter in PALOMA-3 than in previous studies, indicative of the younger, higher-risk, and more heavily pretreated population recruited into the PALOMA-3 trial [18].

In conclusion, this study was consistent with the international phase III CONFIRM study and provides evidence for the efficacy of fulvestrant 500 mg in Chinese women with ER-positive advanced breast cancer whose disease had progressed or relapsed after prior endocrine therapy (antiestrogen or aromatase inhibitor).

This investigation was conducted in accordance with the Declaration of Helsinki and national and international guidelines, and has been approved by the authors’ institutional review board. All patients provided informed, written consent. The trial was registered with ClinicalTrials.gov (NCT01300351).

Patients were excluded if they had life-threatening metastatic visceral disease, malignancies other than breast cancer in the previous 3 years (except for adequately treated basal cell or squamous cell carcinoma of the skin or in situ carcinoma of the cervix), or a history of bleeding diathesis or long-term anticoagulant therapy. In addition, patients were excluded if they had received more than one regimen of chemotherapy or endocrine therapy for advanced disease, extensive radiation therapy or cytotoxic treatment in the previous 4 weeks, or strontium-90 in the previous 3 months. Patients with abnormal laboratory values were also excluded.

Patients had a clinical assessment once a month for the first 6 months of the study, and every 12 weeks thereafter. Disease progression was assessed by RECIST (version 1.1) every 12 weeks (± 2 weeks) from the first visit until progression. AEs were recorded at each study visit for the duration of the study and coded using the Medical Dictionary for Regulatory Activities (version 16.1).

The primary endpoint of the study was PFS, defined as the time from the first study visit (randomization) to earliest objective disease progression, including death from any cause. Secondary endpoints included ORR (proportion of patients who had measurable disease at baseline and achieved a complete or partial response), DoR (time from response to progression or death in patients who had an objective response), CBR (proportion of patients in the full analysis set achieving a complete response, partial response, or stable disease ≥ 24 weeks), DoCB (time from randomization until disease progression or death from any cause in patients experiencing clinical benefit), safety, and pharmacokinetic data (to be reported separately).

The study planned to randomize 220 patients in order to obtain at least 100 evaluable patients in each treatment group (the minimum number agreed with the China Food and Drug Administration for this registration trial). A predefined criterion was used to determine whether the results from this study were consistent with those from the international CONFIRM study; PFS was considered consistent if the HR for the treatment comparison (fulvestrant 500 mg vs 250 mg) was < 1 (i.e. favored fulvestrant 500 mg). The study was not powered to detect statistically significant differences between treatment groups.

The primary analysis for PFS was conducted using a log-rank test, stratified by prior endocrine therapy (antiestrogen vs aromatase inhibitor) in the full analysis set. The data cut-off and analysis was conducted when at least 150 progression events had been observed and the initial RECIST follow-up evaluation was completed for all randomized patients.

The evaluable-for-response set (all randomized patients with at least one measurable target lesion at baseline) was used to determine the ORR and DoR. The full analysis set was used to determine the CBR and the DoCB. For ORR and CBR, a logistic regression model was fitted with factors of treatment and last endocrine therapy received prior to fulvestrant (antiestrogen vs aromatase inhibitor). DoR and DoCB were assessed by Kaplan-Meier analysis. Safety analyses were conducted for all patients who received at least one dose of fulvestrant.

This work was supported by AstraZeneca.

Guofang Sun, Huifang Chen and Yuri Rukazenkov are employees of AstraZeneca. The authors declare no other conflicts of interest.