Methods: PubMed was searched to identify relevant epidemiological studies on AILD. The human development index (HDI) was applied as an indicator for socioeconomic development. HDI data were obtained and calculated based on the 2014 Human Development Report. Pearson coefficient and linear regression analysis were conducted to estimate the correlation between incidence and HDI.

Conclusions: There is positive association between the national incidence of AILD and the socioeconomic status, as measured by HDI. In less-developed countries, the incidence of AILD, especially PBC and AIH, might be less common.

Autoimmune liver diseases (AILD) cover a spectrum of primary biliary cirrhosis (PBC), primary sclerosing cholangitis (PSC), autoimmune hepatitis (AIH) and immunoglobulin G4 (IgG4) related cholangitis. These are all relatively rare diseases but result in significant morbidity and mortality. A considerable proportion of patients with AILD eventually progress to end-stage liver disease. In Europe, AILD represent a major indication for liver transplantation. As complex disorders, AILD develop from the interactions between a variety of genetic and environmental factors [1–3]. Until now, the pathogenesis of PBC, PSC, AIH or IgG4 related cholangitis has not been fully elaborated.

Previous epidemiological studies have reported that the incidence of AILD varies over time and space [4]. It is widely accepted that, in genetically susceptible individuals, environmental risk factors might contribute to the onset of disease [2]. The rapid economical development of society leads to changes in lifestyle, hygienic and psychosocial conditions. The influence of the socioeconomic status on the incidence of AILD has never been studied. Herein, we systematically reviewed epidemiological studies of AILD from all over the world, and explored the relationship between the AILD incidence and the socioeconomic status. In this study, the human development index (HDI) was applied as an indicator to reflect socioeconomic status. We are convinced that this study might provide additional insight into the pathogenesis and etiology of these diseases.

Primary characteristics of the enrolled studies including first author, publication year, research period, country, continent, criteria of disease identification, incidence (per 100,000 per year) and HDI were summarized in Table 1. A majority of the studies (29 of 42) were conducted in Europe, while six studies were conducted in North America, six and two were conducted in Asia and Australia, respectively.

Table 2: Correlation between AILD incidence and HDI, along with its three dimensions 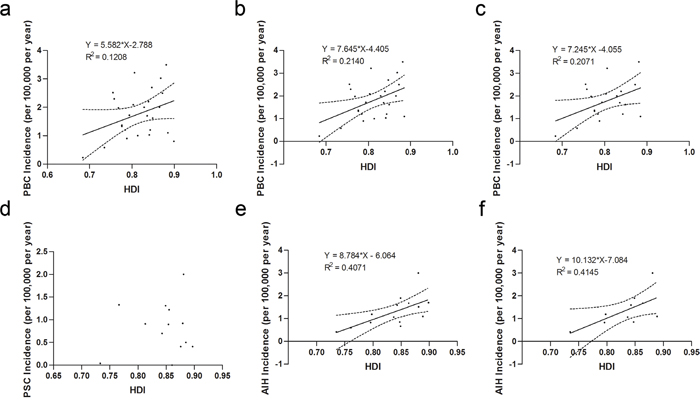 In subgroup analysis for geographic location (continent), Figure 1c demonstrated that the PBC incidence in Europe was statistically, positively correlated with the national HDI [β = 7.245 ± 7.021 (95% CI), r = 0.455, P = 0.044]. The relationship between the HDI and PBC incidence in Asia, North America or Australia was impossible to be identified due to the limited number of studies involved.

Studies investigating the PBC incidence were classified into three groups based on the fact if they were conducted in very high, high or medium HDI countries. ANOVA analysis revealed no significant difference among the groups (P = 0.074) (Figure 2a). Countries with a very high HDIs presented a mean PBC incidence of 1.981 per 100,000 per year (Standard deviation (SD): 0.842), while high HDI countries had a mean PBC incidence of 1.544 per 100,000 per year (SD: 0.641). Similarly, we removed the study conducted in New Zealand, Australia by Ngu et al.,[24] and found that PBC was significantly more prevalent in countries with higher HDIs (P = 0.045 by ANOVA).

Figure 2: National incidence of autoimmune liver diseases in countries with different development levels. a. Incidence of PBC; b. Incidence of PSC; c. Incidence of AIH. One-way analysis of variance or unpaired t test was conducted in the comparison.

This study revealed that socioeconomic development, as indicated by the HDI, might have a positive correlation with the incidence of PBC and AIH. Countries with very high HDI tended to have a higher incidence of PBC and AIH compared to countries with high or medium HDI. In addition, the economic status, as indicated by GNI per capita (income index of HDI), had a positive correlation with the incidence of PSC and AIH. We additionally found some association between national incidence of AILD and the socioeconomic status.

It has been commonly recognized that AILD, mainly consisted of PBC, PSC and AIH, develops as a result from the influence of multiple genes in combination with currently undefined environmental factors. Environmental risk factors might be very complex, but are regarded to trigger the disease onset. PBC is a female predominant liver disease. A controlled interview-based study in the United States revealed that a history of urinary tract infections, cigarette smoking, use of hormone replacement therapies, or frequent use of nail polish were associated with an increased risk for PBC [47]. On the other hand, PSC is a progressive cholestatic liver disease, which is strongly associated with inflammatory bowel disease. A case-control study in the Netherlands has demonstrated that smoking has a protective effect for developing PSC [1]. In terms of AIH, it is mentioned that alcohol drinking and living in a childhood home with wood heating are protective factors against the development of AIH [2]. Other putative environmental factors of AILD include keeping pets, type of housing, number of siblings and family manners. An unidentified agent (i.e., toxin/microbe) might be involved in the development of AILD [3]. Tenca et al. have confirmed that close contact with a pet (especially a cat) during childhood increase the risk of AILD [3]. All these environmental factors as mentioned above might be related to the development of socioeconomic status and subsequent lifestyle changes. Based on this correlation, we made a hypothesis that the incidence of AILD might have a causal relationship with human socioeconomic development.

In this study, a comprehensive review is presented, covering all available relevant studies that report the incidence of AILD without restriction of geographic region or language. On a global level, there was a positive but not significant correlation between PBC incidence and HDI. When excluding the study by Ngu et al conducted in New Zealand [24], whose PBC incidence was especially low compared to other locations in a similar research period, the incidence of PBC demonstrated a positive correlation with HDI. In addition, the PBC incidence in Europe correlated positively with HDI. We found a similar positive correlation in regard to the AIH incidence and the HDI, both worldwide and in Europe. However, we failed to get the similar result in terms of PSC.

A deep analysis on the three dimensions of HDI has been performed. Interestingly, a high GNI per capita had a close association with PSC and AIH prevalence. Furthermore, a higher PBC incidence was related with a higher life expectancy at birth and a lower mean and expected years of schooling. These results summarized in our study might offer clues to the pathogenesis of AILD.

It is the first time a research was conducted, investigating the relationship between the AILD incidence and socioeconomic development. The HDI was selected as the measurement tool because of its worldwide acceptance in international comparisons of development levels. Another strength of this study is that we set up rigorous inclusion criteria, including only population-based studies with definite diagnosis of AILD. Population-based surveys have higher validity because everyone in the at-risk population, or a random sample of the population, is accounted for.

Nevertheless, a few limitations of this study must be taken into consideration. First of all, the review of AILD epidemiology was confined to Europe, North America, Asia and Australia, due to limited data in Africa and Oceania. Secondly, different areas within a country usually have different development levels. However, HDI is the summary of the average socioeconomic status of a country. Moreover, some studies were conducted in a specific region or a single province of a country, which resulted in an uneven distribution of incidence data. Thirdly, we failed to make subgroup analyses according to gender, ethnicity or region (rural/urban gap), on account of the insufficient data. In some way, different populations in an area might have variations in the disease incident rates.

In summary, we have demonstrated a potentially positive relationship between the national incidence of AILD and HDI. This study provides for the first time the evidence that in areas with higher development levels, AILD might be more prevalent, and offers a distinctive perspective on the global epidemiological status of AILD. A more robust and comprehensive analysis is required for further more epidemiological investigations in other continents and based on more detailed information.

For the purpose of this paper, only studies were included with definite criteria for the diagnosis of autoimmune liver disease. The diagnostic criteria for PBC included: (i) clinical presentation; (ii) elevated serum level of alkaline phosphatase of liver origin for more than 6 months; (iii) presence of serum anti-mitochondrial antibodies (≥1:40); (iv) histological characteristics of florid bile duct lesions. Criteria (ii) and (iii) were diagnostic for PBC, and criteria (iv) confirmed the diagnosis.

The identification of PSC was based on increased serum levels of alkaline phosphatase and γ-glutamyltranspeptidase not otherwise explained, when magnetic resonance cholangiography (MRC) or endoscopic retrograde cholangiography (ERC) demonstrated bile duct changes with multifocal strictures and segmental dilatations. Secondary causes of sclerosing cholangitis and other cholestatic disorders were excluded.

AIH was diagnosed based on the combination of clinical, biochemical (e.g. presence of autoantibodies, elevated immunoglobulin G level) and histological conditions according to the reported criteria [48–50].

Definition and calculation of HDI

The HDI is a compound measure of average achievement in three key dimensions of human development: a long and healthy life (health index: life expectancy at birth), being knowledgeable (education index: mean and expected years of schooling) and having a decent standard of living (income index: gross national income (GNI) per capita).

Only studies that present incidence of PBC, PSC or AIH with a definite diagnosis in an adult population were included. Non population-based surveys were disqualified, such as those only enrolled patients in a particular hospital or participants taking part in a particular health plan.

Two investigators independently completed eligibility evaluation and data extraction. Disagreement was solved by discussion with the third investigator. A total of 1708 records were identified through basic search. 1652 publications were excluded after screening through titles and abstracts. Further eligibility evaluation resulted in the exclusion of nine studies because of the absence of data about HDI or disease incidence, and an additional exclusion of four studies because they were not adult population-based. Finally, a total of 43 surveys were included in this study.

All statistical analysis was performed by SPSS 21.0 (IBM, Chicago, IL, USA). Associated data was plotted using GraphPad Prism (6.0, GraphPad Software, Inc., San Diego, CA, USA). Kolmogorov–Smirnoff test was conducted to examine the normal distribution of variables. Correlations between the incidence of AILD and HDI were obtained by Pearson coefficient (with normal distribution); in cases of skewed distributions of variables, the Spearman coefficient was applied. In addition, a linear regression analysis was conducted. One-way analysis of variance (ANOVA) or an unpaired t-test was used to compare disease incidence in groups with different socioeconomic development. A P value of less than 0.05 was considered as statistically significant.

This work was supported by grants from National Natural Science Foundation of China (81500665), Zhejiang Engineering Research Center of Intelligent Medicine (2016E10011) and Project of New Century 551 Talent Nurturing in Wenzhou.

9. Danielsson A, Boqvist L, Uddenfeldt P. Epidemiology of primary biliary cirrhosis in a defined rural population in the northern part of Sweden. Hepatology. 1990; 11:458-464.

10. Almdal TP, Sorensen TI. Incidence of parenchymal liver diseases in Denmark, 1981 to 1985: analysis of hospitalization registry data. The Danish Association for the Study of the Liver. Hepatology. 1991; 13:650-655.