Cancer has become a major health problem and a large economic burden in China [1]. According to the data of The National Central Cancer Registry of China (NCCR), gastric cancer and colorectal cancer are two commonly diagnosed cancers in both man and women in china [1].

In recent studies, cancer stem cell (CSC) hypothesis has been proposed to explain the pathogenesis of cancers [2]. To understand the exact biological features of CSC, the key thing is to isolate CSC from cancer cells. A series of new studies indicated that CD44 expression was elevated in cancer stem-like cells in many kinds of cancer [3]. The human CD44 gene is located on chromosome 11p13 [4]. CD44 protein was initially identified as the receptor for hyaluronic acid (HA), and involved in proliferation, differentiation and motility of both normal and cancer cells [5]. CD44 protein contains an N-terminal HA-binding link-homology module, stem region, transmembrane domain, and short C-terminal cytoplasmic domain (Figure 1A) [6]. CD44 isoforms are generated by alternative splicing of 10 variant exons (v1-v10) in the extracellular domain [7]. Molecular weight of CD44 isoforms ranges from 85 kDa (CD44s, standard version) to 250 kDa (CD44 v3-v10) (Supplementary Figure S1) [8]. 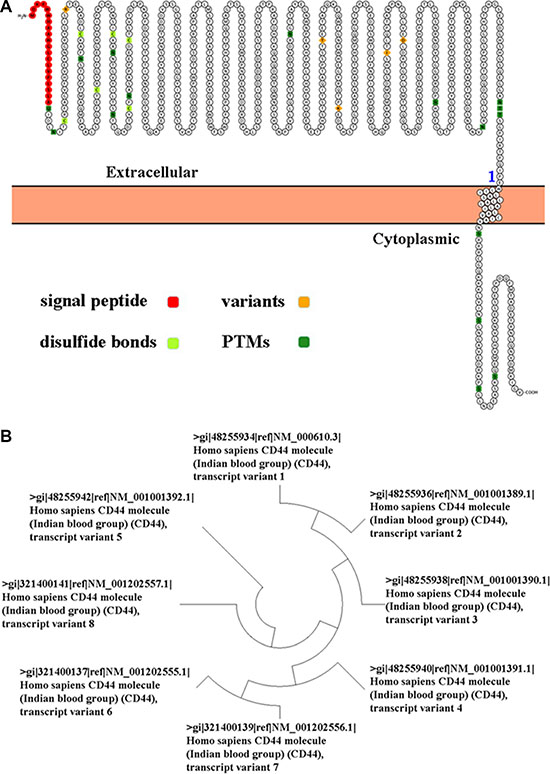 Following the identification of various CD44 transcripts (Figure 1B and Supplementary Table S1), the studies for CD44 became complex. For example, CD44s suppresses metastasis, but CD44v7-10 facilitates invasion in prostate cancer [9]. CD44 expression in the colon cancer tissue was substantially higher than that in normal mucosa and it correlates with cancer progression and aggressiveness [10]. CD44 expression was positively correlated with lymph node and distant metastasis, and poorer outcome of gastric cancer patients [11]. In this study, we evaluated the significance of CD44 mRNA in human colon and gastric cancer by using The Cancer Genome Atlas (TCGA) data portal. 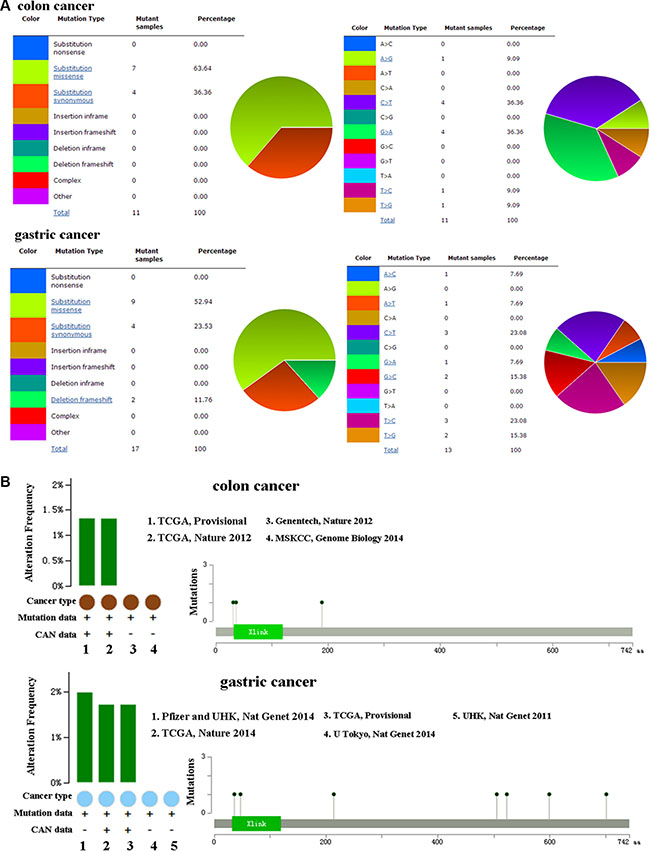 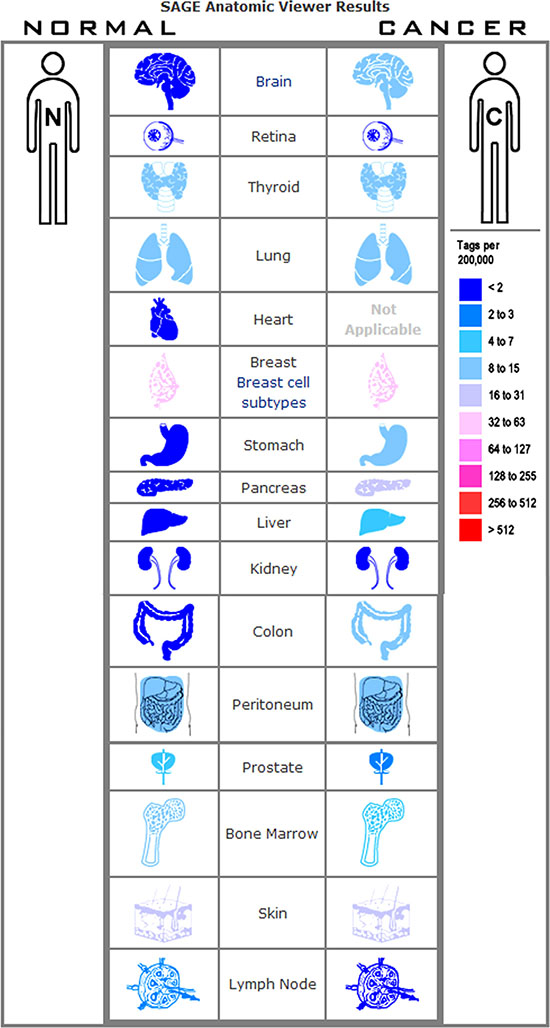 Figure 3: Expression profile for CD44 in human cancers found by the SAGE DGED. 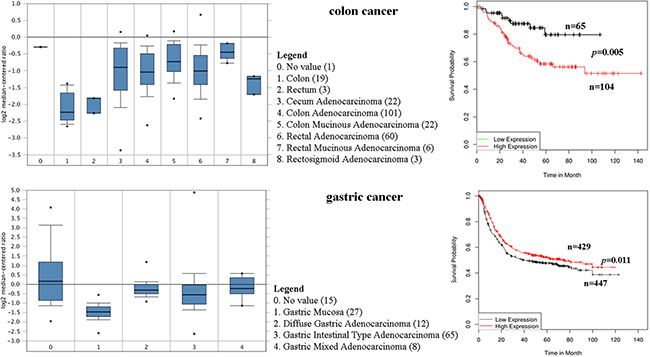 Coexpression genes of CD44 were shown in Figure 5A. Among these genes, we focused on CD4 and CD74. Figure 5B illustrated the whole view for CD44, CD4, and CD74 mRNA of colon and gastric cancer samples based on TCGA database. The heatmaps of CD44 mRNA in colon cancer were strikingly opposite to CD4 and CD74 (Figure 5B). However, no obvious trend was found among CD44, CD4, and CD74 mRNA in gastric cancer (Figure 5B). 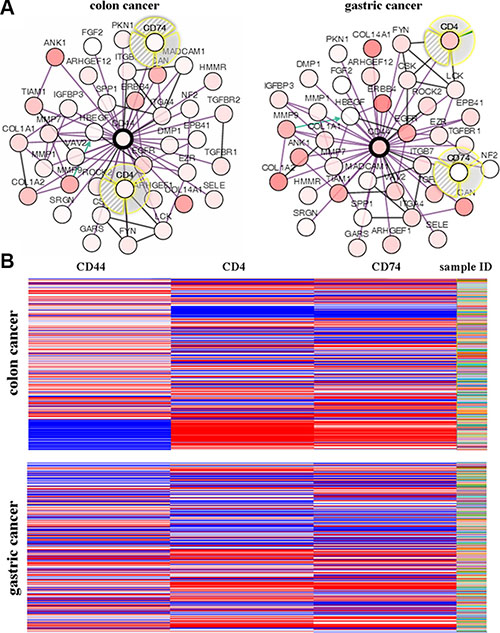 In our study, higher CD44 mRNA was identified in both colon and gastric cancer by using TCGA database. This finding was consistent with previous studies. Jing et al. [17] found that CD44 mRNA was increased in colorectal cancer tissues than that in matched normal tissues. Wang et al. [18] performed a quantitative review and confirmed higher CD44 levels in gastric cancer. Furthermore, we found that CD44 mRNA is associated with poor overall survival (OS) in colon cancer, while with begin OS in gastric cancer. However, the prognostic roles of CD44 protein in colon and gastric cancer remain controversial. Both Lugli et al. [19] and Hong et al. [20] found that loss of membranous CD44 was linked to the worse survival in colorectal cancer. In the Pitule’s study, no relation was found between CD44 expression and OS of colorectal cancer patients [21]. Huh et al. [22] found that CD44 overexpression is an independent unfavorable prognostic factor for OS in colorectal cancer. Similar controversies also existed in gastric cancer [23–25]. The reason for these controversies is very complex. First of all, the heterogeneity of CD44 protein varies in different cell types and growth conditions [7, 8]. So, the protein sequence with immunogen is different in each cancer cell (Supplementary Figure S1). Second, it is difficult to make a definite conclusion for the limited sample size of a single study. Based on the reasons above, it seems that CD44 mRNA used as a prognostic marker is better than CD44 protein.

Another finding in this study is that CD4 and CD74 may be used as markers to predict the prognosis of colon and gastric cancer, but not the markers for cancer stem cell. CD4+ T cell-dependent anti-tumor immunity is the immunological driver behind beneficial clinical responses to cancer [26]. In this study, we confirmed CD44 was strikingly opposite to CD4 in colon cancer. It indicated that CD44 expression may regulate anti-tumor immunity by suppressing CD4 expression. CD74, a transmembrane glycoprotein, associates with the major histocompatibility complex (MHC) Class II and plays important roles in the intratumoral immune response [27–29]. CD74 was overexpressed in thyroid malignancy, malignant pleural mesothelioma, and head and neck squamous cell carcinomas, and it is associated with advanced tumor stage [30–32]. Shakib et al. [33] found that both CD44 and CD74 proteins were significantly overexpressed in oral squamous cell carcinoma (OSCC) patients. These results indicated that CD4 and CD74 were not expressed in CD44+ cancer stem-like cells, and their expression in immune cells is regulated by CD44 induced-antitumor immune response. However, further studies are required to confirm the roles of CD4 and CD74 in cancers.

The Catalog of Somatic Mutations in Cancer (COSMIC) database (http://www.sanger.ac.uk/cosmic/) was used for analysis CD44 mutations. Pie charts were generated for a distribution overview and substitutions on the coding strand in colon cancer and gastric cancer.

CD44 mRNA levels in colon and gastric cancer tissues were compared with their matched normal tissues by using TCGA datasets in Oncomine database (http://www.oncomine.org). The threshold used to obtain the most significant probes of the queried gene for each microarray data included a two-fold difference in expression between cancers and normal tissues with a P-value < 1 × 10−4. Genes coexpressed with CD44 were also analyzed and the map was generated by using Cytoscape 3.3.0.

The prognostic value of CD44 gene in colon cancer and gastric cancer was analyzed using Kaplan-Meier Plotter (http://kmplot.com/analysis/) and PPISURV (http://www.bioprofiling.de). Overall survival of the patient with high and low levels of CD44 was shown by using a Kaplan-Meier survival plot.

The UCSC Cancer Genomics Browser (https://genome-cancer.ucsc.edu/) was used for integrative visualization of large, complex genomic datasets. According to the cluster results of Oncomine database analysis, we entered CD44, CD4, and CD74 into the search box to perform a search by using Genes viewing mode.

This study was supported by National Natural Scientific Foundation of China (No.81572777 and No.81502558) and Talents Introduction Projects of Liaoning Medical University.