The application of conventional chemotherapy is limited in colorectal cancer (CRC) cells with pre-existing and/or acquired resistances [1]. In addition, our groups [2–4] and others have shown that molecular heterogeneity of CRCs hinders the uniform application of specific molecularly-targeted agents [5–7]. Therefore, studies are exploring novel and more efficient anti-CRC agents [8].

Oldenlandia diffusa (OD), a member of the Rubiaceae family, is a well-known medicinal plant in ancient China [9]. Existing evidences have described multiple biological functions of OD components, including anti-angiogenic, anti-inflammatory, anti-oxidant, and pro-apoptotic activities [9, 10]. More importantly, (OD) extracts (ODE) have displayed significant anti-cancer activity in a number of preclinical cancer studies [10–13]. However, the potential effect of ODE in CRC cells has not been extensively studied.

Our studies [14, 15] have implied that AMP-activated protein kinase (AMPK), the master energy sensor, is also an important mediator of cell death and apoptosis under various stress conditions (see review [16]). In multiple cancer cell lines, various anti-cancer agents and natural occurring compounds were shown to activate AMPK-dependent cell apoptosis/death pathways [14, 16–26]. In the current study, we show that ODE potently inhibits CRC cells in vitro and in vivo. Activation of AMPK could be the major signaling mechanisms responsible for ODE’s actions in CRC cells. 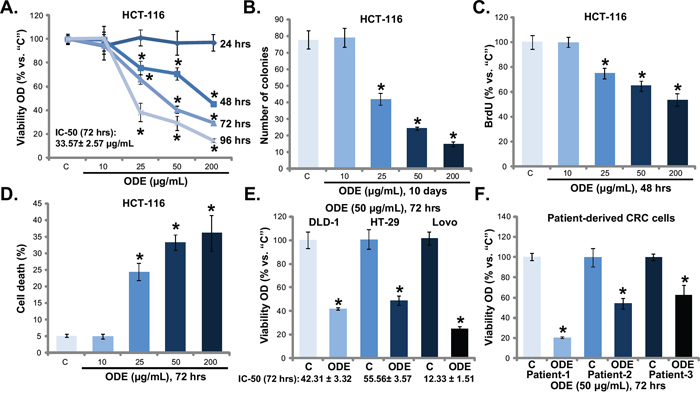 Figure 1: Oldenlandia diffusa extracts (ODE) inhibits CRC cell proliferation and survival. A panel of established CRC cell lines (HCT-116, Lovo, HT-29 and DLD-1) or three primary human CRC cell lines were treated with or without ODE at applied concentrations, cells were further cultured, and cell proliferation was evaluated by MTT assay A, E and F., colony formation assay (B., for HCT-116 cells) and BrdU incorporation assay (C., for HCT-116); Cell death was analyzed by the trypan staining assay (D., for HCT-116). “C” stands for untreated control group (Same for all Figures). For each assay, n=5 (Same for all Figures). Data in this figure were repeated four times, and similar results were obtained. * p < 0.05 vs. “C” group.

Next, we studied the potential activity of ODE to other human CRC cells. MTT results in Figure 1E showed that ODE (50 μg/mL) inhibited the proliferation of three other established CRC cell lines, including DLD-1, HT-29 and Lovo. We also calculated the IC-50 of ODE in above CRC cells with different p53 status. The IC-50 of ODE was low in p53-wild HCT-116 (33.57± 2.57 μg/mL) and LoVo (12.33 ± 1.51 μg/mL) CRC cells [33–35], but was relatively high in p53-mutant HT-29 (55.56± 3.57μg/mL) and DLD-1 (42.31 ± 3.32μg/mL) cells [33–35]. Meanwhile, we established three lines of patient-derived primary CRC cells based on the method described [2]. These primary CRC cells were also incubated with ODE-containing medium. MTT assay was again performed, and results (Figure 1F) showed that ODE (50 μg/mL) inhibited proliferation of all three lines of primary CRC cells. Together, these results show that ODE exerts potent anti-proliferative and cytotoxic activity against human CRC cells. 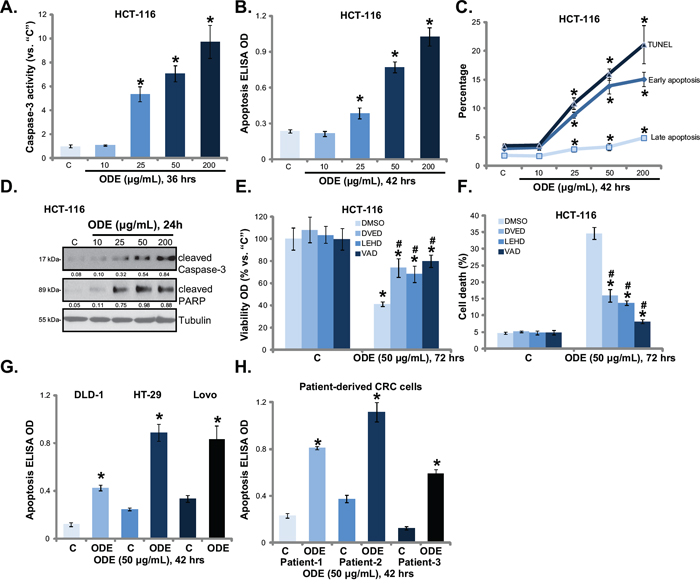 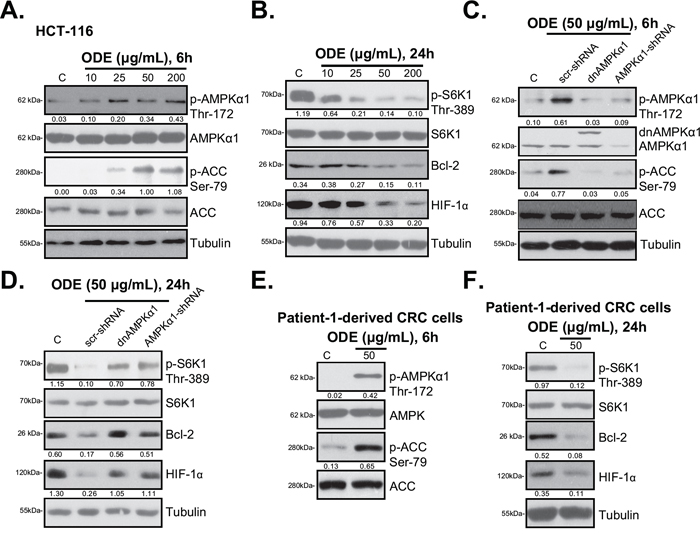 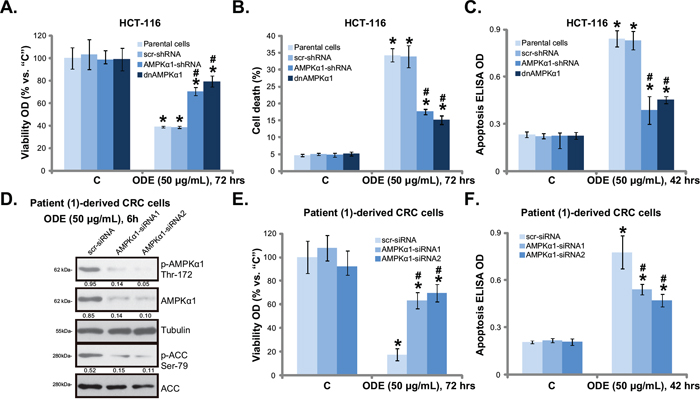 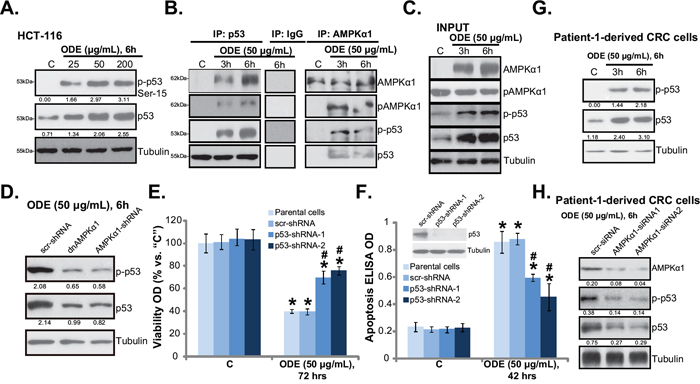 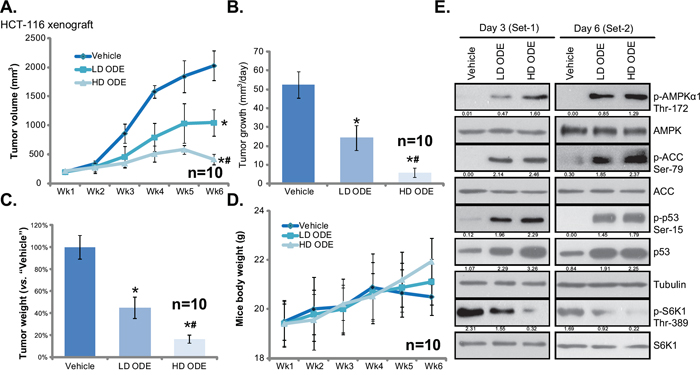 The role of p53 in cell apoptosis has been well-established. Recent studies have shown that ODE-induced anti-cancer activity could be through activating p53 signaling [10]. Thus, one important finding of this study is that AMPK is also important for p53 activation by ODE in CRC cells. Our results showed that activated AMPKα1 formed a complex with p53 in ODE-treated CRC cells, which might be important for subsequent p53 activation and CRC cell apoptosis. Blockage of this complexation, though shRNA-mediated knockdown of p53 or AMPKα1, or by AMPKα1 mutilation, inhibited ODE-induced p53 activation and subsequent CRC apoptosis.

It should be noted that inhibition of AMPK via the methods described did not result in total abolition of ODE-mediated cytotoxic effects against CRC cells. Meanwhile, p53 shRNA stable knockdown only inhibited (but not reversed) ODE’s actions. Therefore, it is likely that other signalings, proposed by a number of other studies [9–13], could also contribute to the actions by ODE in CRC cells. Thus, it will be interesting to understand the relationship between AMPK signaling and these other possible pathways in mediating ODE’s effects. Further studies will also be needed to explore the potential upstream kinases for AMPK activation by ODE.

The other important funding of the study is that i.p. injection of ODE at well-tolerated doses significantly inhibited HCT-116 xenograft growth in nude mice. Further, AMPK activation, mTORC1 inhibition and p53 activation were also observed in ODE-treated HCT-116 tumors. These results suggest that ODE could be further investigated as a novel and promising anti-CRC agent.

All methods listed in the study were carried out in accordance with the approved guidelines by authors’ institutions (Nanjing University of Chinese Medicine, Nanjing Medical University and Jiangsu University).

Human CRC cell lines, including HCT-116, DLD-1, HT-29 and Lovo were cultured as described [2]. For all the cell lines, DNA fingerprinting and profiling were performed every 6 months to confirm the origin of the cell line, and to distinguish the cell line from cross-contamination. All cell lines were subjected to mycoplasma and microbial contamination examination. Population doubling time, colony forming efficiency, and morphology under phase contrast were also measured every 6 months under defined conditions to confirm the phonotype of cell line.

Three patients with primary colon cancer administrated at Wuxi People’s Hospital of Nanjing Medical University were enrolled in the study. Patient-1, male, 62 years old, Grade I, T2; Patient-2, male, 60 years old, Grade II, T3; Patient-3, male, 56 years old, Grade II, T2; As previously described [2], the surgery-isolated colon cancer specimens were thoroughly washed and minced into small pieces. Samples were then mechanically dissociated and filtered via a 70 μm strainer. Single-cell suspensions of the colon cancer cells were achieved by re-suspending cells in 0.15% (w/v) collagenase I (Sigma) dissolved in DMEM for 1 h, individual cells were pelleted and rinsed twice with DMEM before re-suspending in the cell culture medium as described [2]. The study was approved by the institutional review board (IRB) of all authors’ institutions. All clinical investigations were conducted according to the principles expressed in the Declaration of Helsinki. The protocol was approved by authors’ institutions. Written-informed consent was obtained from all subjects.

The proliferation of CRC cells was also estimated via the incorporation of 5-bromo-2’-deoxyuridine (BrdU). Briefly, cells (0.8 ×104/well) were exposed to applied ODE treatment. Afterwards, BrdU (10 μM, Roche Diagnostics, Shanghai, China) was added to the medium, and then the cells were incubated for another 16 h. Next, the cells were fixed, and BrdU incorporation was determined with a cell proliferation enzyme-linked immunosorbent assay (ELISA) kit (Roche Diagnostics) according to the manufacturer’s instructions. ELISA OD was utilized as a quantitative measurement of cancer cell proliferation.

After applied ODE treatment, CRC cells were suspended in 1 mL of DMEM containing 0.25% agar (Sigma). The cell suspension was then added on the top of a pre-solidified 100 mm culture dish. After 10 days of incubation, the number of colonies were fixed, stained and manually counted.

As described [30], to test caspase-3 activity, 20 μg of cytosolic protein extracts per sample were mixed with the caspase assay buffer [30] and the caspase-3 substrate Ac-DEVD-AFC (15 μg/mL) (Calbiochem). After 1 h incubation at 37°C, the released AFC was measured through a Shimadzu FC 5300 spectrofluorometer with excitation at 400 nm. The caspase-3 activity of ODE-treatment group was normalized to that of untreated control group.

Cell apoptosis was quantified by Histone-DNA ELISA PLUS kit (Roche Applied Science, Shanghai, China) according to the manufacturer’s protocol [3, 27, 28].

As described [31], after applied treatment, 1000 μg of cell lysates per sample were pre-cleared with 30 μL of protein A/G PLUS-agarose (Santa Cruz) for 1 h. Next, the lysates were centrifuged for 5 min at 4°C in a micro-centrifuge to remove nonspecific aggregates. The supernatant was then rotated overnight with 0.1-0.25 μg of indicated primary antibody (anti-AMPKα1/anti-p53) (Santa Cruz). The protein A/G PLUS-agarose (35 μL/sample) was then added to the supernatants at 4°C for 4 h. Pellets were washed six times with PBS, resuspended in lysis buffer, and then assayed by Western blots.

The AMPK-α1 siRNA(-1) (5'-GCAUAUGCUGC AGGUAGAU-3'), the AMPK-α1 siRNA(-2) (5'-AAGG AAAGTGAAGGTGGGCAA-3') and the scramble control siRNA were all provided by Dr. Biao Xu’s Lab [32]. Transient transfection was performed by the Lipofectamine 2000 reagent (Roche) according to the manufacturer’s instructions. Transfection efficiency was determined by Western blots in resulting cells.

The mice experiments were performed based on the protocol described in our previous studies [4, 29] with minor modifications. The male severe combined immuno-deficient (SCID) nu/nu mice were implanted s.c. with HCT-116 cells (5×106 per mouse). When the tumors reached the average volume of 200 mm3, the mice were divided into three groups: Saline (“Vehicle”), low-dose of ODE group (0.2 g/kg, i.p.) and high-dose of ODE group (1.0 g/kg, i.p.). ODE was freshly prepared and administered daily for a total of 30 days. Tumor volumes were recorded weekly, calculated via the following formula: π/6 × larger diameter × (smaller diameter)2. The mice were maintained as described [29]. All studies were performed in accordance with the standards of ethical treatment approved by the Institutional Animal Care and Use Committee (IACUC) and Association for the Assessment and Accreditation of Laboratory Animal Care (AAALAC). The protocol was approved by authors’ institutions (Nanjing University of Chinese Medicine, Nanjing Medical University and Jiangsu University).

Each experiment was repeated a minimum of three times, with similar results obtained each time. Data were presented as mean ± standard deviation (SD). Statistics were analyzed by one-way ANOVA followed by a Scheffe’ and Tukey Test by SPSS 15.0 software (SPSS Inc., Chicago, IL). Significance was chosen as p < 0.05. The concentrations of agents applied and the treatment durations were chosen based on published literatures and results from our pre-experiments. IC-50 was also calculated by SPSS software [2].

All listed authors state no conflict of interests.