Neutrophil-to-lymphocyte ratio for the prognostic assessment of hepatocellular carcinoma: A systematic review and meta-analysis of observational studies

*These authors have contributed equally

Background and aims: Neutrophil to lymphocyte ratio (NLR) is an inflammatory-based marker. A systematic review and meta-analysis was performed to explore the prognostic role of NLR in patients with hepatocellular carcinoma (HCC).

Materials and Methods: All relevant literatures were identified via PubMed, EMBASE, and Cochrane library databases. Hazard ratio (HR) with 95% confidence interval (95%CI) was calculated. Subgroup meta-analyses were performed according to the treatment options, NLR cut-off value ranges, and regions.

Conclusions: NLR should be a major prognostic factor for HCC patients. NLR might be further incorporated into the prognostic model of HCC.

Prognostic assessment of hepatocellular carcinoma (HCC) is very important for clinicians and patients. The relevant knowledge is being rapidly accumulated. Traditional prognostic variables mainly include portal vein thrombosis, tumor size, and alpha-fetoprotein, etc. [1]. As for the prognostic staging of HCC, the Barcelona Clinic Liver Cancer (BCLC) system is the most frequently used tool with 5 major parameters, such as tumor size, tumor number, Child-Pugh class, physical status, and tumor metastasis [2]. Several alternative staging systems include the Cancer of the Liver Italian Program (CLIP) system [3], the Hong Kong Liver Cancer (HKLC) system [4], and the Japan Integrated Scoring (JIS) system [5]. As for the liver function assessment of HCC, Child-Pugh class is the most frequently used tool with 5 variables, such as bilirubin, albumin, international normalized ratio, ascites, and hepatic encephalopathy [6]. Albumin-bilirubin score is a recently developed and more convenient tool [7]. More recently, the associations of inflammation-based markers with the prognosis of HCC have been actively explored. Neutrophil to lymphocyte ratio (NLR), which refers to the ratio of neutrophil to lymphocyte count, is a readily available marker for assessing the systemic inflammatory changes. NLR reflects the potential balance between neutrophil-associated pro-tumor inflammation and lymphocyte-dependent anti-tumor immune function [8–11]. An elevated NLR may represent a trend towards increased pro-tumor inflammation and decreased anti-tumor immune function. Herein, we have conducted a systematic review and meta-analysis to analyze the prognostic role of NLR in HCC patients treated with different treatment options. This work was registered at PROSPERO database (registration number: CRD CRD42016033409). 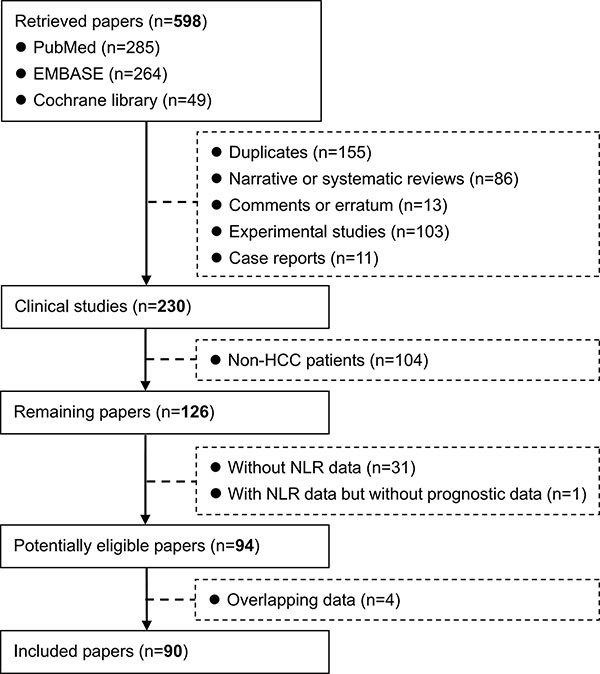 Some data from Kinoshita A, Annals of Surgical Oncology (2015) is also published by the same authors in British Journal of Cancer (2012).

Some data from Wang GY, PLoS ONE (2011) is also published by the same authors in National Medical Journal of China (2011).

There were 39 groups of individual data regarding the association of baseline NLR with overall survival. They were extracted from 38 papers. HR was 1.80 (95% CI: 1.59–2.04, p < 0.00001), suggesting that low baseline NLR group had a significantly better overall survival than high baseline NLR group (Figure 2). Heterogeneity among studies was statistically significant (I2 = 86%, p < 0.00001). Funnel plot suggested a potential publication bias (Supplementary Figure 1). 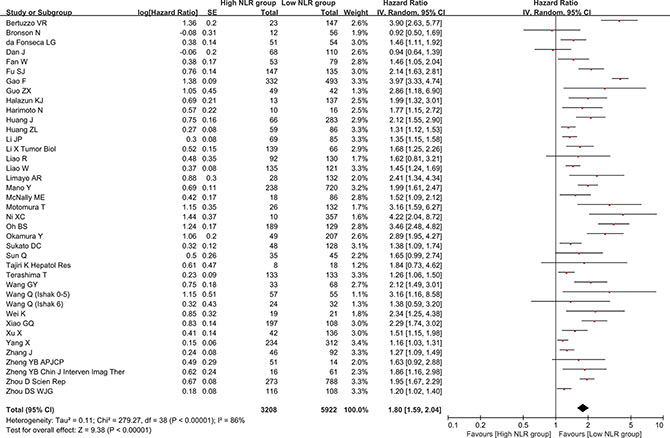 There were 7 groups of individual data regarding the association of NLR change with overall survival. They were extracted from 7 papers. HR was 2.23 (95% CI: 1.83–2.72, p < 0.00001), suggesting that decreased NLR group had a significantly better overall survival than increased NLR group (Figure 4). Heterogeneity among studies was not statistically significant (I2 = 0%, p = 0.95).

Association of baseline NLR with recurrence-free or disease-free survival

There were 20 groups of individual data regarding the association of baseline NLR with recurrence-free or disease-free survival. They were extracted from 20 papers. HR was 2.23 (95% CI: 1.80–2.76, p < 0.00001), suggesting that low baseline NLR group had a significantly better recurrence-free or disease-free survival than high baseline NLR group (Figure 5). Heterogeneity among studies was statistically significant (I2 = 88%, p < 0.00001). Funnel plot suggested a potential publication bias (Supplementary Figure 2).

Association of NLR change with recurrence-free or disease-free survival

There were 4 groups of individual data regarding the association of NLR change with recurrence-free or disease-free survival. They were extracted from 4 papers. HR was 2.23 (95% CI: 1.83–2.72, p < 0.00001), suggesting that decreased NLR group had a significantly better overall survival than increased NLR group (Figure 6). Heterogeneity among studies was not statistically significant (I2 = 0%, p = 0.52).

Results of subgroup meta-analyses were summarized in Table 2.

The present study systematically reviewed the role of NLR in the assessment of prognosis of HCC patients. To our knowledge, two previous meta-analyses also explored the association of NLR with prognosis of HCC [102–103]. Both of them were published in 2014. In the first meta-analysis, Xiao et al. searched the relevant literatures in August 2013 and identified 15 studies with 3,094 patients [102]. In the second meta-analysis, Xue et al. searched the relevant literatures in October 2013 and identified 26 studies with 4,461 patients [103]. Several advantages and features of our work should be acknowledged: 1) the relevant literatures were identified more recently (January 2016), and a larger number of relevant studies were included (90 papers with 20,475 patients); 2) according to the different time points when NLR values were obtained, we divided into baseline NLR, post-treatment NLR, and NLR change; 3) overall survival and recurrence-free or disease-free survival were selected as the primary outcomes; and 4) according to the treatment options, NLR cut-off values, and regions, we performed subgroup meta-analyses.

Another finding was that low post-treatment NLR was significantly associated with better overall survival of HCC patients. However, due to a small number of included studies, the subgroup meta-analyses were performed in patients undergoing transarterial chemoembolization and hepatic arterial infusion chemotherapy, studies with a NLR cut-off value of ≥ 2 and < 3 and NLR cut-off value of 4, and Asian studies. Except for one subgroup meta-analysis in HCC patients undergoing hepatic arterial infusion chemotherapy, other subgroup meta-analyses supported statistically significant associations. Similarly, we also found that decreased NLR after treatment was significantly associated with better recurrence-free or disease-free survival of HCC patients. Notably, such an inverse association was maintained regardless of treatment modalities.

Several limitations should be clarified. First, HR value for the association of NLR with overall survival was relatively small. Thus, their relationship might be weak. Whether the prognostic assessment of HCC can be guided by baseline NLR value should be further explored. Second, all included studies were observational, and most of them were retrospective. The quality of included studies was relatively low according to the NEWCASTLE-OTTAWA quality assessment scale. A major concern was a low comparability of patient characteristics between low and high NLR groups. This was primarily because all included studies were observational and NLR was only one of many variables included in univariate or multivariate analyses in a majority of original studies. Third, the heterogeneity was statistically significant in several meta-analyses. Random-effect model was employed to produce more conservative results. Fourth, because the researchers paid close attention on the prognostic role of NLR, some relevant paper has been published after this paper was finished [104].

In conclusion, the importance of NLR for assessing the overall survival and recurrence-free or disease-free survival should be acknowledged. Thus, we would like to suggest that NLR may be incorporated into the algorithm regarding the prognostic assessment of HCC. Further studies should confirm the prognostic ability of NLR in different specific settings according to the stage of HCC and treatment options and explore the superiority of NLR over other traditional prognostic scores or models. Additionally, considering that NLR change was associated with prognosis of HCC patients, future studies should explore how to prolong the survival of HCC patients by improving the inflammatory conditions.

We searched 3 major databases, including PubMed, EMBASE, and Cochrane library databases from the inception of databases. Search items were as follows: ((hepatocellular carcinoma) OR (liver cancer)) AND ((NLR) OR ((neutrophil) AND lymphocyte)). The last search was performed on January 20, 2016. All relevant literatures regarding the prognostic role of NLR in HCC patients were identified. Exclusion criteria were as follows: 1) duplicates; 2) comments; 3) erratum; 4) reviews; 5) case reports; 6) experimental studies; and 7) original studies did not evaluate the prognostic role of NLR in HCC patients. Publication language was not restricted.

We extracted the following data from the included studies: first author, journal, publication year, publication type, study design, regions, enrollment period, study population, number of patients, NLR cut-off values, and overall survival and recurrence-free or disease-free survival data according to the NLR value. In cases of uncertainty, we communicated with the authors and/or journal editors to validate the accuracy of data.

Given the nature of included studies, the study quality was assessed according to the NEWCASTLE-OTTAWA quality assessment scale for cohort studies [105]. This scale consisted of 8 questions with a maximum of 9 points. A study with more points would be of higher quality.

Data analysis was described as previously [106–108]. Briefly, only random-effects models were employed. Hazard ratios (HRs) were calculated because the overall survival and recurrence-free or disease-free survival were time-dependent data. I2 statistic and the Chi-square test were used to evaluate the heterogeneity among studies. Funnel plots were performed to evaluate the publication bias, if there were ≥ 10 groups of individual data included in the meta-analysis.

Notably, the meta-analyses were performed according to the times when NLR values were obtained (i.e. baseline NLR, post-treatment NLR, and NLR change). As for the baseline and post-treatment NLR, the patients were divided into two groups (i.e., low and high NLR group) according to the definitions of original studies. If the patients were divided into ≥ 3 groups in the original studies, the relevant data would not be included in the meta-analyses. Additionally, subgroup meta-analyses were performed according to the treatment options (i.e., liver transplantation, surgical resection, radiofrequency ablation, transarterial chemoembolization, radioembolization, hepatic arterial infusion chemotherapy, transarterial embolization plus sorafenib, sorafenib, and mixed treatments), NLR cut-off value ranges, and regions (i.e., America, Asia, and Europe).

3. A new prognostic system for hepatocellular carcinoma: a retrospective study of 435 patients: the Cancer of the Liver Italian Program (CLIP) investigators. Hepatology. 1998; 28:751–755.

12. Abdelmessih RM, Verna EC, Brubaker WD, Halazun KJ, Siegel A, Brown RS. Hepatocellular carcinoma tumor staging at the time of liver transplant but not at diagnosis are predictive of tumor recurrence in patients who are downstaged with chemoembolization. Hepatology. 2011; 54:1380A–1381A.