2Center for the Research of Advanced Diagnosis and Therapy of Cancer, Graduate School of Medical and Dental Sciences, Kagoshima University, Kagoshima, Japan

Patients with pancreatic ductal adenocarcinoma (PDAC) have a poor clinical outcome, despite improvements in diagnosis and treatment. The overall five year survival rate for all patients with or without pancreatectomy after diagnosis is 13% in Japan [1, 2]. On the other hand, patients with a successful resection of PDAC at an early stage (Stage IA) have a 46% five year survival rate [1, 3]. Most patients with PDAC are diagnosed in the advanced stages because of the anatomical location of the pancreas, lack of specific symptoms, infiltration to the surrounding organs, or distant metastasis even from a small primary tumor less than 2 cm in diameter. Thus, a diagnostic technique for small pancreatic adenocarcinomas without symptoms is urgently needed.

MUC1 and MUC4 are often overexpressed in epithelial cancers, and our immunohistochemical studies in the pancreas and/or biomolecular studies have shown the following: (1) aberrant expression of MUC1 and MUC4 are associated with invasive proliferation of tumors and a poor outcome for patients [16, 17]; and (2) the expression of MUC1/MUC4 mRNA is regulated by epigenetic mechanisms such as DNA methylation in the promoter region [18-20].

Some have reported that expression of MUC1 and MUC4 increases with increasing pancreatic intraepithelial neoplasia (PanIN) and/or intraductal papillary mucinous neoplasm (IPMN) grade [17, 21-24]. Alteration of methylation patterns has been reported as important in cancer development and progression [25]. Concerning pancreatic cancer, it has been shown that MUC4 promoter hypomethylation increases with progression of disease from PanIN to frank PDAC [26]. However, the significance of alterations in DNA methylation status in the promoters of MUC1 and MUC4 at various stages in the development of PDAC is not fully understood. Recently, it was reported that DNA methyltransferases (DNMT) add a methyl group to a cytosine, generating 5-methylcytosine (5mC) [27] and TET and/or AID/APOBEC (apolipoprotein B mRNA-editing enzyme, catalytic polypeptide-like) family members were demethylated by conversion of 5mC to 5-hydroxymethylcytosine (5hmC) and further oxidized products in mammalian genomes (i.e. active DNA demethylation) [28-30]. In addition, it has been reported that hypoxia upregulates the expression of these DNA demethylation enzymes as well as MUC1 [31, 32]. 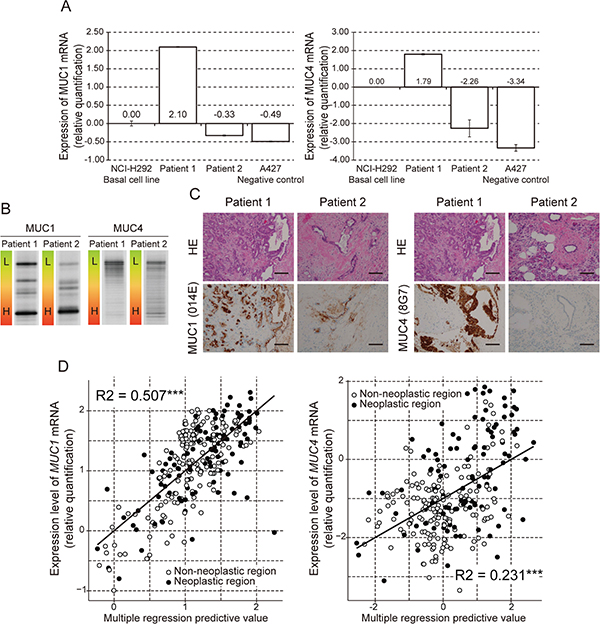 PDAC is an aggressive malignancy that carries an extremely poor prognosis due to delayed diagnosis, early metastasis and resistance to most cytotoxic agents [1]. Thus, it is very important to establish new diagnostic, prognostic and therapeutic biomarkers. It has been shown previously that expression of mucin genes (including MUC1, MUC2, MUC3, MUC4 and MUC5AC) is regulated by DNA methylation at promoter regions in cancer cell lines [18-20, 35, 36]. In the present study, we analyzed the relationships among the expression of two mucins, MUC1 and MUC4, their DNA methylation status at promoter regions, and expression of DNA methylation-related enzymes in pancreatic tissue in non-neoplastic and PDAC samples. We also evaluated the association between mucin gene methylation status and survival.

A previous study showed that analysis of DNA methylation status in promoters of MUC1, MUC2 and MUC4 (MSE analysis of pancreatic juice samples) could distinguish between gastric type intraductal papillary mucinous neoplasm (IPMN), intestinal type IPMN, other type IPMN and PDAC [33]. In this study, we evaluated the relationship between DNA hypomethylation status and overall survival in PDAC, especially patients in stages IIA and IIB. Those patients with hypomethylated MUC1 had a significantly decreased overall survival as compared to those with hypermethylated MUC1. A similar result was found for MUC4. When considered together, the methylation status of MUC1 and MUC4 was predictive of survival: patients with hypermethylation of both genes had significantly increased overall survival. Thus, we propose that aberrant methylation of MUC1 and MUC4 promoters are potential prognostic biomarkers for PDAC, and suggest that further MSE analysis of human clinical samples to determine its utility for early diagnosis of pancreatic neoplasms and for stratifying patients with respect to modes of treatment.

Extraction and quantification of mRNA

Extraction of DNA and bisulfite modification

MSE analysis was performed using previously described methods [33, 34]. The target DNA fragments were amplified by nested PCR using bisulfite treated DNA using the primer sets shown in Supplementary Table 3. In the electrophoresis step, the amplicon was applied to the D-Code system (BioRad Laboratories, Hercules, CA, USA) using a polyacrylamide gel with a linear denaturant gradient at 60°C and 70 V for 14 h. Band intensity was quantified by Image J software. The hypomethylation index was calculated as the proportion of highest band intensity/total band intensity of the sample. Subsequently, the hypomethylation index in each sample was normalized using data from a hypomethylated and hypermethylated cell line. Cell lines with hyper- and hypomethylated of MUC1 (Caco2 and LS174T) and MUC4 (Caco2 and LS174T) were used as control standards.

We thank Kei Matsuo for his assistance with clinical sampling and DNA methylation analysis. We thank Yukari Nishimura for her excellent technical assistance with immunohistochemistry.

We do not have any disclosure or conflicts of interest in the study.