Backgrounds: High serum C-reactive protein (CRP) was found to be associated with poor prognosis in kinds of solid tumors, however, its role in the recurrent gastric cancer (RGC) is unknown. The present study aimed to explore the prognostic value of serum CRP in RGC patients.

Methods: A total 72 RGC patients who underwent radical surgery from January 2005 to May 2008 were enrolled. The clinical, pathological and survival information were collected. The serum CRP level was measured when the recurrence was confirmed, and the association between serum CRP and clinicopathological characters was analyzed. The prognostic value of serum CRP for RGC was investigated.

Conclusions: High serum CRP level was associated with aggressive pathological features, was an independent poor prognostic factors for RGC, which might be a potential prognostic marker for RGC patients.

As the fourth most common cancer worldwide, the long-term outcome of gastric cancer (GC) remains poor [1-3]. For the GC patients who underwent surgery, recurrence was identified as one of the most important factors for prognosis [4]. More than 60% GC patients were in the advanced stage at the initial diagnosis, and the recurrence occurred in about 62% GC patients who received surgery [5-7]. Numerous studies have investigated the predictive factors, recurrence patterns and the therapy for RGC [8-11]. Unfortunately, no precisely predictive factors were identified for RGC patients. What’s worse, no effective nor standard therapy has been established for RGC presently [12]. As the prognosis of RGC remains clinically poor, it is urgent to explore the novel biomarker which could predict early recurrence and prognosis precisely.

Based on the above consideration, we measured the CRP level, collected the clinical and survival information, explored the association between serum CRP and clinical-pathological factors, and investigated its prognostic value in RGC patients.

72 RGC patients who received treatment from January 2005 to May 2008 were enrolled in this study. Patients with concurrent infection or incomplete follow-up information were excluded. The OS was defined as time from the date of diagnosis to the date of death or last visit. This study was approved by the Research Ethics Committee of First Teaching Hospital of Tianjin University of Traditional Chinese Medicine, China. Written informed consents were obtained from the patients before participating in this study.

Serum CRP level was measured from peripheral venous blood samples. All the patients were divided into high CRP group (H-CRP; >0.8 mg/dL) and normal CRP group(N-CRP; ≤0.8 mg/dL) according to the serum CRP level and previous study [13]. The clinical-pathological information was reviewed from the database of our hospital, and the survival data was collected from clinic visit or family contact. The response evaluation was performed according to the Response Evaluation Criteria in Solid Tumors Guidelines.

The statistical analyses were performed using SPSS version 18.0 (SPSS, Chicago, IL, United States). Continuous variables were described using mean±standard deviation; the survival was compared through the Kaplan–Meier method and log-rank tests. Furthermore, the prognostic role of the CRP was identified by the Multivariate analyses. Significance was defined as p-Values< 0.05.

Among the 72 RGC patients, 9 patients had at least two recurrence patterns concurrently. Of all the RGC patients, 10 patients (13.9%) received a total gastrectomy, and 50 patients (84.7%) received adjuvant chemotherapy according to NCCN guideline. As the Table 1 and Table 2 showed, the peritoneal seeding was the most common recurrence pattern. The clinical and pathological factors were shown in Table 1. 55 patients were male; the average age was 60.0 years, and 34 patients were well differentiated. The median follow-up time for all RGC patients was 55 months.

Table 1: The association between CRP and clinicopathological characteristics (n = 72)

*The patterns of recurrence involved at least two patterns

Association between CRP and clinical-pathological factors

There were 39 patients (54.2%) with elevated CRP level, while 33 patients (45.8%) were within the normal range. The mean concentration of serum CRP was 8.8±0.5 mg/dL in the H-CRP group, while 0.4±0.1 mg/dL in the N-CRP group. We further compared the clinical-pathological factors based on the CRP level. As the Table 1 showed, the high CRP level was associated with larger tumor size (p = 0.004) and more Lymph node metastasis (p = 0.003). In general, the RGC patients with elevated CRP seemed to have more aggressive pathological features.

In our study, the median survival time after recurrence was 10.3 months. The further Kaplan–Meier method and log-rank tests showed that the long-term outcome of H-CRP RGC patients was significantly worse than those RGC patients with normal CRP level (Survival, 11.5 months vs. 6.5 months, p = 0.012), these result was showed in Figure. 1. 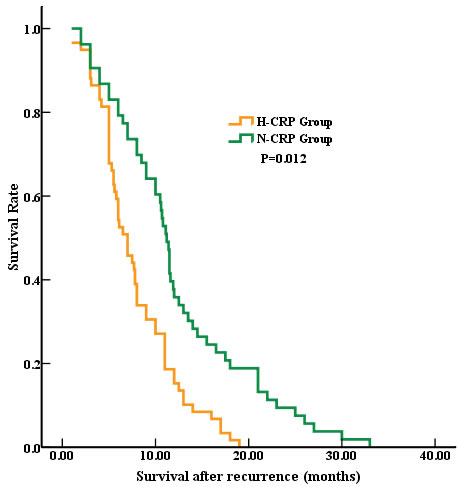 The GC recurrence occurred most within 2 years after resection, which resulted in poor prognosis for RGC [5-7]. Many basic and clinical studies focused on the recurrence of GC, but the meaningful result, such as accurate predictors, effective drugs, standard treatment, et al, were still not sufficient. That’s to say, it is still urgent to find novel biomarkers and establish effective therapies to improve the prognosis of RGC.

As the previous studies reported, the elevated serum CRP was associated with poor survival in kinds of solid tumors [19-24]. Recently, Dr. Shao and her colleague found that the high CRP level was associated with the poor outcome for combined small cell lung cancer [13]. In the present study, we first investigated the prognostic significance of serum CRP in RGC. Our data identified that RGC patients with higher CRP level had worse survival time compared to N-CRP group (6.5 months vs. 11.5 months, respectively; p = 0.012) (Showed in Fig. 1). This result was consistent with previous studies. In addition, in the present study, the multivariate analysis confirmed that the elevated CRP was an independent poor prognostic factor for RGC, which reinforced the prognostic value of CRP in solid tumors. At last, consistent with the other previous studies, we re-confirmed that the follow-up treatment (HR = 2.650, 95% CI, 1.608-3.674; p = 0.001), time to recurrence (HR = 0.466, 95% CI, 0.217-0.701; p = 0.033) were independent prognosis factors for RGC.

Recently, some studies reported the association between CRP and clinical-pathological factors. For the resected NSCLC, Dr. Lee and his team found that the higher CRP level was associated with more lymph vascular invasion [17]. And one study from Japan showed that the patients with elevated CRP had larger tumor size in hepatocellular carcinoma [20]. One systematic review summarized that CRP was an important biomarker for prognosis and treatment response in kinds of solid tumors [25]. In consistent, our data also showed that the RGC patients with higher CRP level had larger tumor size (p = 0.004) and more Lymph node metastasis (p = 0.003). All these findings indicated that the elevated CRP level was associated with aggressive pathological parameters.

Although this study had some shortcomings such as small size, single-center study and retrospective design, CRP still has its clinical significance because of its simple, easy detection and accurate prediction. Better designed large scale and multicenter studies should be conducted to confirm our result.

The higher serum CRP was associated with aggressive clinical-pathological features resulting in worse long-term outcome in RGC patients. Our study confirmed that the elevated CRP was an independent prognostic factor, which might be potential treatment target for RGC.

This work is supported by the Tianjin Science & Technology Plan Projects (No. 12ZCDZSY15800), National Natural Science Foundation of China (No. 81273937 and No. 81403220) and Tianjin Research Program of Application Foundation and Advanced Technology (No. 14JCZDJC36900).

The study was approved by the Research Ethics Committee of First Teaching Hospital of Tianjin University of Traditional Chinese Medicine. Written informed consents were obtained from the patients before participating in the study.

4. Xu AM, Huang L, Zhu L and Wei ZJ. Significance of peripheral neutrophil-lymphocyte ratio among gastric cancer patients and construction of a treatment-predictive model: a study based on 1131 cases. Am J Cancer Res 2014; 4: 189-195.

8. Bilici A and Selcukbiricik F. Prognostic significance of the recurrence pattern and risk factors for recurrence in patients with proximal gastric cancer who underwent curative gastrectomy. Tumour Biol 2015; 36: 6191-9.

9. Bilici A and Selcukbiricik F. Prognostic significance of the recurrence pattern and risk factors for recurrence in patients with proximal gastric cancer who underwent curative gastrectomy. Tumour Biol 2015; 36: 6191-6199.