The overall prognosis of lung cancer is poor. This is largely due to its often late presentation, high recurrence frequency and lack of curative systemic therapy. According to the recently proposed cancer stem cell (CSC) theory, cancers are maintained by subpopulations of tumor cells that possess stem or progenitor cell-like characteristics. These cells exhibit pluripotency and self-renewal properties, and give rise to a heterogeneous population of tumor cells [1–3]. CSCs also appear to have lower proliferation rates and higher expression of DNA repair and anti-apoptotic genes than normal cells, which can contribute in treatment failure [4, 5].

CSCs can be distinguished from other cancer cells on the basis of specific markers. In non-small cell lung cancer (NSCLC) cells, for example, CD133 and CD44 are CSC markers that confer drug resistance and stem cell-like properties [6–9]. Aldehyde dehydrogenase 1 (ALDH1), a detoxification enzyme, is also a marker for human lung CSCs [10]. In addition, the embryonic stem cell (ESC) transcription factors sex determining region Y-box 2 (SOX2), octamer binding transcription factor 4 (OCT4) and Nanog all share the biological properties of CSCs and promote tumorigenesis [11–14]. Although the clinical impact of these markers is unclear, they may have a prognostic or predictive value in NSCLC.

During epithelial mesenchymal transition (EMT), epithelial cells lose their normal properties, such as cell-cell adhesion and E-cadherin expression, and acquire the characteristics of stem or tumor cells [15, 16]. Notably, maintenance of the stem cell state depends on both EMT-inducing and stem cell maintenance signals [15]. In NSCLC, however, little is known about the underlying mechanisms or clinical significance of these processes.

Expression of CSC markers in healthy and cancerous lung tissue 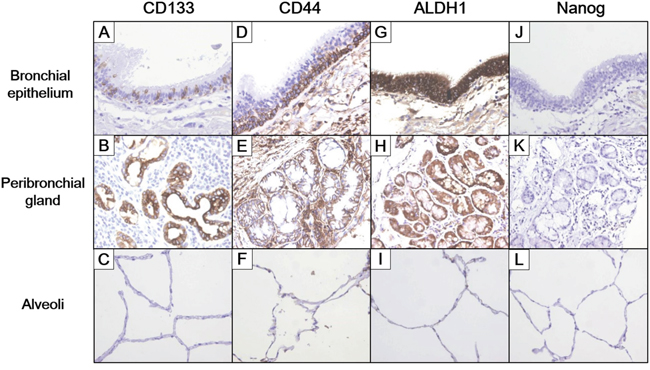 CSC markers showed diffuse homogenous expression in lung cancer tissue. Within cancer cells, CD133 and CD44 were detected in the membrane and cytoplasm, while ALDH1 and Nanog were found only in the cytoplasm. The transcription factors SOX2 and OCT4 were found exclusively in the nucleus (Figure 2).

In SqCC, CD44, ALDH1, SOX2 and Nanog were expressed in 88.0%, 73.2%, 71.1%, and 92.2% of tumor cells, respectively. No CD133 or OCT4 expression was detected in SqCC. There was no significant association between CSC marker expression and clinicopathologic variables in SqCC (Supplementary Table S2). 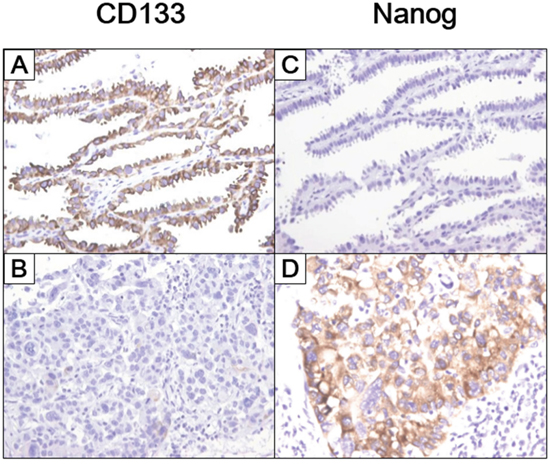 Figure 4: Kaplan-Meier curves showing survival among patients with and without Nanog expression in lung adenocarcinoma. A. Disease-free survival. B. Overall survival. Differences were evaluated using the log-rank test.

The goal of this study was to investigate the clinicopathologic and prognostic significance of CSC marker expression in histologic subtypes of ADC and SqCC. Our results showed that CSC markers have distinct expression profiles in the two cancers. Although several studies have reported on the clinicopathologic implications of CSC markers in NSCLC, there is little data comparing CSC marker expression in ADC and SqCC. In SqCC, we found no correlation between expression of CSC markers and any clinicopathologic variable or survival outcome. This result is in line with an earlier report that a higher percentage of survival-related and poor-differentiation-related genes were expressed in the CSC gene set in lung ADC than in SqCC [17]. Our results suggest that CSC markers do not correlate with any known genes or pathways that control tumor differentiation or affect survival in SqCC.

We next examined the association between CSC marker expression and prognostic outcomes in lung ADC. In previous studies, CD133 expression correlated with poor prognosis or was not associated with prognostic outcomes in lung cancer. However, our data indicate that CD133-positive tumors are indolent and significantly associated with better outcomes than CD133-negative tumors [18–21]. Moreover, CD44 expression correlated with less aggressive tumor behavior, though the association with survival was not statistically significant. The association of CD133 and CD44 expression with longer survival in ADC would appear counterintuitive, as tumors enriched in stem cell properties are expected to be more aggressive. One possible explanation with respect to CD133 is that the contribution of CD133 to cell-cell adhesion and its association with E-cadherin expression reduces tumor aggressiveness [22]. Moreover, CD133 expression is influenced by complex epigenetic, tissue-specific, spatiotemporal and tumor microenvironmental factors. Consequently, not all tumor-initiating cells express CD133, nor are all CD133-positive cells tumorigenic [23]. With respect to CD44, the interaction between CD44 and its ligand, hyaluronic acid, may inhibit angiogenesis and tumor progression [24]. The current evidence thus suggests that CD133 and CD44 should not be considered general CSC markers in NSCLC. Further study is needed to clarify the biological functions and clinical applications of these markers in NSCLC.

In contrast to CD133 and CD44, the prognostic significance of ALDH1 expression in lung ADC is largely unknown. Results from several studies in other tumors suggest ALDH1 is more likely to be expressed in a tumor if it is also present in the corresponding healthy tissue, and that loss of ALDH1 expression may be a step in the carcinogenetic process [25]. In our study, ALDH1 was expressed in all layers of the bronchial epithelium and was associated with low pathologic stage and better survival outcomes in lung ADC, which is consistent with the findings of Dimou et al. [26].

There have been few studies on the prognostic significance of Nanog expression in lung cancer [27]. Our results show that in lung ADC, Nanog expression is associated with not only a poor prognosis but also aggressive pathologic features such as poor tumor differentiation and a solid growth pattern. These findings are consistent with those of Meng et al. [28], who suggested Nanog is an important contributor to EMT that enhances tumor cell proliferation, invasion and motility. In addition, we also showed that Nanog expression correlates with Snail-1 expression, which is an EMT-inducing transcription factor. Taken together, these findings suggest Nanog expression is an independent prognostic factor for poor survival in lung ADC patients, and may therefore be a novel therapeutic target.

We also found that CSC marker expression was significantly associated with histologic subtype. Levels of CD133, CD44 and ALDH1 expression were higher in the lepidic subtype of ADC, while Nanog was highly expressed in the solid subtype. Lung ADC is a histologically heterogeneous subset of NSCLC, and survival outcomes differ depending on the histologic subtype across all pathologic stages [29, 30]. Our results suggest that CSC markers may reflect the differentiation state of lung cancers and contribute to their phenotypic heterogeneity. In addition, the association of CSC markers with histologic subtypes suggests that comprehensive histologic subtyping following the IASLC/ATS/ERS classification may provide additional insight into the genesis of lung ADC within the context of CSC theory.

In conclusion, we have shown that CSC markers may be prognostic factors in NSCLC, and high Nanog expression is an independent prognostic factor for poor survival that may be associated with EMT features in ADC patients. In addition, the clinicopathologic implication of CSC markers in lung ADC differed from those in tumors arising from other organs. Thus, the impact of CSC marker expression should be considered in a tumor/organ specific manner.

We retrospectively enrolled 368 NSCLC patients with ADC (n = 226) or SqCC (n = 142) who had undergone surgical resection at Seoul National University Bundang Hospital between May 2003 and December 2008. None of these patients received preoperative chemotherapy or radiation therapy. Clinicopathologic data was obtained from the medical records and pathology reports. The pathological stage of the tumors was determined according to the guidelines in the Cancer Staging Manual of the American Joint Committee on Cancer (7th edition) [31]. The study protocol was approved by the Institutional Review Board of Seoul National University Bundang Hospital.

All resected tumor specimens were fixed with formalin and then stained with hematoxylin and eosin (H&E). All H&E slides were carefully reviewed by two of the authors (E.P. and H.K.) to determine tumor subtype. ADC in situ and minimally invasive ADC samples were excluded from the study. All other invasive ADC samples were categorized as lepidic, papillary, acinar, micropapillary, solid, or invasive mucinous according to the International Association for the Study of Lung Cancer/American Thoracic Society/European Respiratory Society (IASLC/ATS/ERS) classification of lung cancer [32]. These histologic subtypes were used to determine tumor grade (lepidic, grade 1; acinar and papillary, grade 2; and micropapillary and solid, grade 3).

Tissue microarray (TMA) blocks were constructed from the most representative areas of paraffin blocks by Superbiochips Laboratories (Seoul, Korea), as previously described [33].

16. Bao B, Azmi AS, Ali S, Ahmad A, Li Y, Banerjee S, Kong D, Sarkar FH. The biological kinship of hypoxia with CSC and EMT and their relationship with deregulated expression of miRNAs and tumor aggressiveness. Biochim Biophys Acta. 2012; 1826:272-296.