Neoadjuvant chemo(radio)therapy followed by surgery is the standard of care for patients with locally advanced resectable esophageal adenocarcinoma (EAC). There is increasing evidence that drug resistance might be related to genomic heterogeneity. We investigated whether genomic tumor heterogeneity is different after cytotoxic chemotherapy and is associated with EAC patient survival. We used arrayCGH and a quantitative assessment of the whole genome DNA copy number aberration patterns (‘DNA copy number entropy’) to establish the level of genomic tumor heterogeneity in 80 EAC treated with neoadjuvant chemotherapy followed by surgery (CS group) or surgery alone (S group). The association between DNA copy number entropy, clinicopathological variables and survival was investigated.

Pre-operative or peri-operative 5-fluorouracil/cisplatin based chemotherapy as well as pre-operative chemoradiotherapy followed by radical resection are the standard of care for patients with locally advanced, resectable esophageal adenocarcinoma (EAC) [1-3]. However, only 20 to 30% of EAC patients currently achieve a durable remission after multimodality treatment [4, 5]. Thus, there is an urgent clinical need to better understand the molecular processes that are involved in disease progression and resistance to therapy.

Cytotoxic chemotherapy exerts one of the strongest selection pressures on cancer cells implying that chemotherapy treatment may favor the persistence of treatment resistant subpopulations [6]. 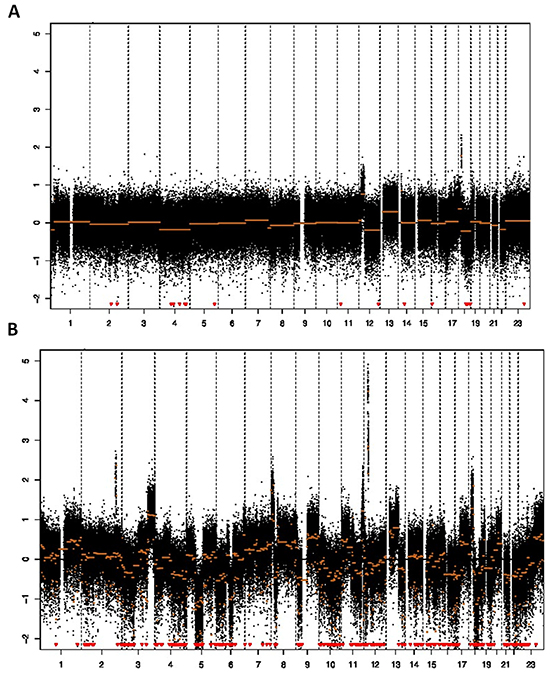 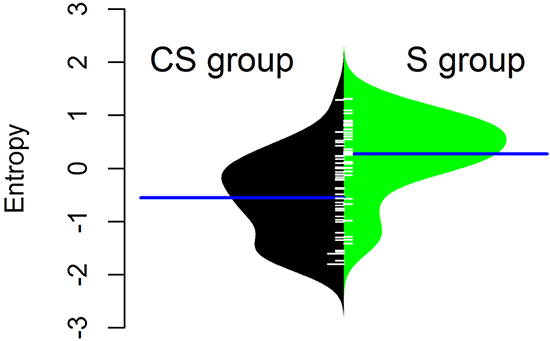 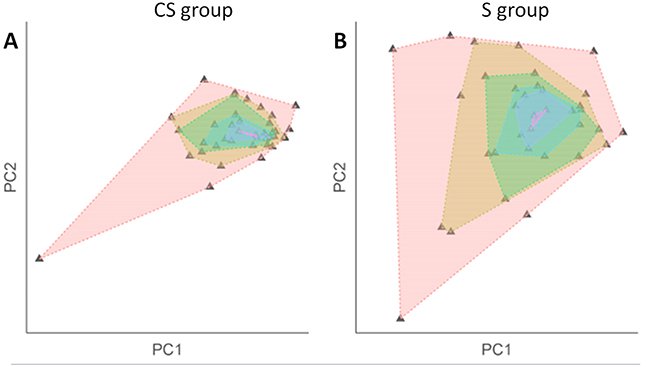 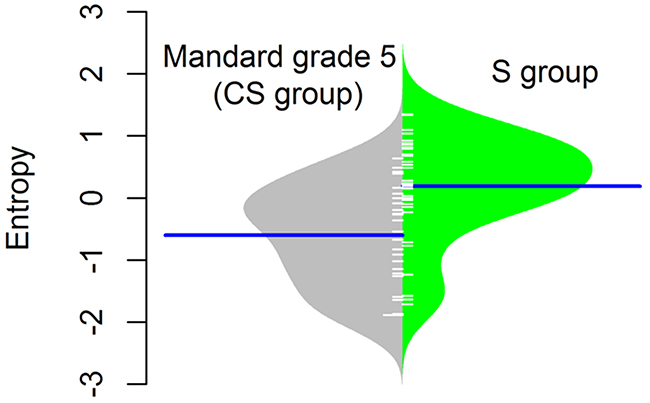 No association was found between depth of tumor invasion (pT/ypT), lymph node status (pN/ypN), grade of differentiation, lymphatic channel invasion, venous invasion or perineural invasion, and DNA copy number entropy neither when investigating these associations by treatment arm nor in the combined group (Supplementary Table S1). 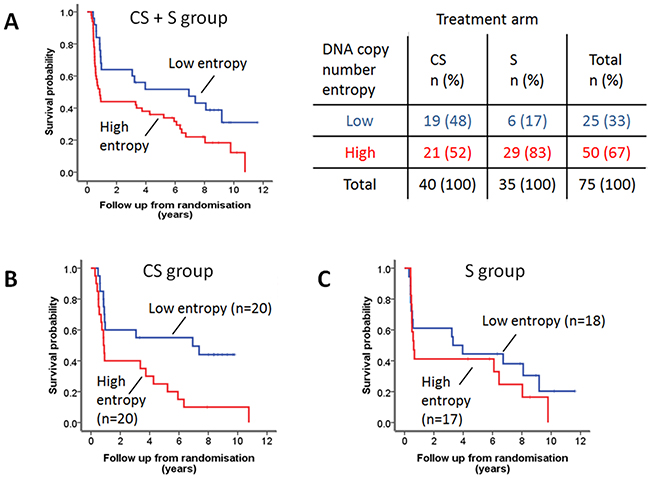 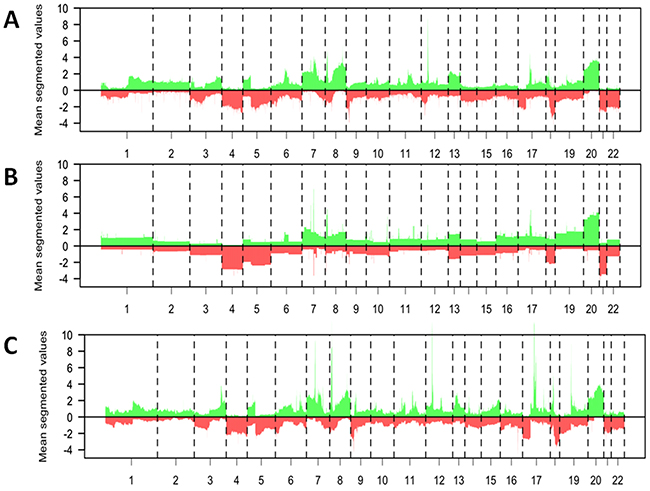 Figure 6: Comparison of the data from the surgery alone group of the current study with previously published datasets from patients with esophageal adenocarcinoma. A–C. Mean DNA copy number aberrations plotted by chromosome position (x-axis) using segmented data points present in all datasets. Gains = above the 0 line, loss = below the 0 line. The profile of the DNA copy number data from the S group patients from the current study (A, n=35) is visually similar to that previously published by Goh et al (B, n=53) and to that previously published by Dulak et al. (C, n=74, 16321 probes).

There have been a number of DNA copy number studies in esophageal adenocarcinoma (EAC) in the past, reporting different candidate genes or group of genes related to tumor progression or patient survival [18-20, 23-26]. A common finding of all previous EAC studies as well as the current study is that the overall level of DNA copy number alterations in EAC was very high leading to very complex DNA copy number profiles. However, only few aberrations were shared across more than 10% of samples supporting the existence of a high degree of genomic tumor heterogeneity in EAC.

The frequency of DNA copy number aberrations (irrespective of the genes involved) has been related to survival in EAC in some but not all studies [23-25]. The current study is the first study to quantify the DNA copy number entropy by whole genome aCGH as a surrogate measure of genomic inter-tumor heterogeneity using DNA extracted from resection material from patients who were either treated by surgery alone (S group) or by 5FU/cisplatin chemotherapy followed by surgery (CS group) as part of the OE02 trial [1].

We found no relationship between DNA copy number entropy and any of the investigated clinicopathological data neither in the S group nor in the CS group. Importantly, there was also no statistically significant association between DNA copy number entropy and Mandard tumor regression grade of the primary tumor (only investigated in the CS group) or percentage of tumor/area (investigated in both groups). These results provide some confidence that the DNA copy number entropy is not simply a surrogate of some other pathological variable or known prognostic factor. Our findings are consistent with results reported in head and neck cancer where the variability of the mutant-allele fraction was used as marker of genomic tumor heterogeneity [9].

Our study showed that EACs after chemotherapy have DNA copy number profiles in which the aberrations were found more frequently at relatively similar locations, making them more ‘homogenous’ when measured by DNA copy number entropy compared to chemo-naïve EACs (Figure 3). In contrast, Almendro et al [11] reported a change in the morphological but not the genomic phenotype of the tumor cells in breast cancer after chemotherapy. Our study showed no difference in the morphological tumor phenotype comparing EAC from the S group with those from the CS group with Mandard grade 5 (no pathological response). However, we found a significant difference in the genomic phenotype between Mandard grade 5 EACs from the CS group and EACs from the S group. This discrepancy between studies could be related to different tumor types (EAC vs. breast cancer) as well as substantial differences in investigated markers (whole genome vs. few selected markers) used to characterize the tumor phenotype and genotype. Further studies in a larger sample size need to verify whether DNA copy number entropy might be a clinically useful biomarker of response to chemotherapy.

Low DNA copy number entropy was only related to better outcome in EAC patients who had received chemotherapy prior to surgery. Mroz et al [9] reported the relation between tumor heterogeneity and patient outcome in head and neck cancer patients treated by surgery alone as well as in those treated with chemotherapy. Murugaesu et al [8] reported that intra-tumoral genomic heterogeneity of the pre-treatment biopsy is related to poor response to platinum based chemotherapy. However, both studies determined genomic tumor heterogeneity prior to chemotherapy, whereas we measured DNA copy number in material after chemotherapy, hence results are not directly comparable.

We compared the aCGH profiles and the DNA copy number entropy of the surgery alone group with published data sets [22, 23]. Visual inspection showed that major aberrations like copy number losses in chromosome (Chr) 3, gains in Chr7, Chr8 and Chr20 were present in all studies. Hence, we think that findings in this study were unlikely to be dataset specific. Due to difference in platforms and hence differences in data resolution, statistical assessment and quantification of the differences were not possible. Since, post-chemotherapy aCGH data from EAC have not been published to date, no comparison to previous data could be made for this group.

In conclusion, this is the first study to quantify genomic tumor heterogeneity in esophageal adenocarcinoma, and to suggest that it might contribute to survival differences after chemotherapy.

Our result requires validation in a larger independent cohort ideally comparing pre- and post-chemotherapy samples from the same tumor to directly measure the change in DNA copy number entropy induced by chemotherapy. The presence of genomic tumor heterogeneity, together with low frequencies of common aberrations across multiple cancers, makes the identification of predictive/prognostic biomarkers in EAC challenging, unless DNA copy number entropy itself can be used for this purpose. For the first time, we can show that cytotoxic chemotherapy appears to effect the tumor genotype (DNA copy number) in cases where the human eye cannot see any changes in the histological phenotype, suggesting that we might need to re-evaluate and potentially adapt the morphology based assessment criteria of primary tumor regression grading in particular in cases with a high tumor cell content per area.

A better understanding of the mechanisms leading to genomic tumor heterogeneity is urgently needed before novel therapeutic strategies can be developed and outcome of EAC patients can finally be improved.

The hematoxylin and eosin stained glass slides from all retrieved resection specimens and the original histopathology reports were reviewed to establish the histopathology data set used for analyses. Regression of the primary tumor was graded according to Mandard et al [27] centrally. Cases were staged according to the 6th edition of the TNM classification [28]. Details of the clinicopathological data of the patient cohort can be found in Table 1.

#one missing value in the CS group.

The tumor cell content per macrodissected tumor tissue area was estimated. As it had been shown previously that DNA copy number analyses from tumors with less than 30% tumor cells/area can be severely compromised [29], five cases (all from the S group) with less than 30% tumor cells/area had to be excluded from further analyses. DNA was extracted from a single FFPE tissue block containing the highest tumor cell density per area as well as from normal tissue (lymph node or normal esophageal wall) from the same patient as described previously [30].

Oligonucleotide positions were defined according to the NCBI36/hg18 assembly (March 2006). Labeling and hybridization were performed as described previously by Buffart et al [31]. Agilent’s feature extraction software (v10.5.1.1) with default settings was used to quantify the fluorescence intensities of all 180,880 features. aCGH data have been deposited in NCBI’s Gene Expression Omnibus and are accessible through GEO accession number GSE56106.

aCGH data were generated from 75 cases. The raw data underwent a series of pre-processing steps, which are detailed in Section S1 of the Supplementary file. The pre-processing was performed within the R statistical environment. After quantification, control spots (n=6,539) were removed from the data yielding 174,341 features. Both channels were background corrected by subtracting background median intensities from foreground median intensities to obtain an unbiased hybridization signal. Normalization, cellularity correction and segmentation were performed with the R-package CGHcall [32]. The median absolute deviation (MAD) was calculated for all probes from all chromosomes as described by [33] as a measure of the technical quality of the aCGH experiment. All statistical analyses were performed using segmented data.

DNA copy number profiles of the patients included in the current study were compared with two previously published DNA copy number data sets (Gene Expression Omnibus (GEO) database accession number: GSE36460 and GSE20154) [22, 23]. All raw datasets were pre-processed and segmented following the same procedures as used in this study. The genomic locations of CGH probes across studies were matched using the R-package sigaR [34] and a mean segmented data profile (average across samples) was generated for each data set (Supplementary Figure S1).

To establish whether there was any relationship between differences in the DNA copy number entropy and tumor cellularity of the sample, we constructed a linear model with tumor cellularity as confounder. Furthermore, the segmented data profiles of <50% (low cellularity) and >= 50% (high cellularity) samples in each treatment arm were projected on its first two principal components separately, for visual inspection of the difference in scatterness.

Nothing to disclose by any of the authors.

This study was performed within the framework of the Center for Translational Molecular Medicine, DeCoDe project (AO, grant 03O-101). This study was supported by project funding from Cancer Research UK (H Grabsch project grant C26441/A8944). DC acknowledges support from the Royal Marsden/Institute of Cancer Research.

1. Allum WH, Stenning SP, Bancewicz J, Clark PI and Langley RE. Long-term results of a randomized trial of surgery with or without preoperative chemotherapy in esophageal cancer. J Clin Oncol. 2009; 27:5062-5067.