Association of FCGR2A rs1801274 polymorphism with susceptibility to autoimmune diseases: A meta-analysis

Autoimmune diseases (ADs) are some complex disorders includes a substantial portion of pathobiology, the potential inheritance and induced environment, efﬁcacy of the common therapies and co-occurrence among diseases. ADs accounted for 4-5% of the population and had always become difficult issues [1]. More recently, genome-wide association study (GWAS) and the sequencing approaches had been widely used to discover low-frequency disease risk alleles, and thousands susceptibility locis might predispose to multiple ADs. An expected observation for risk variants are shared across diseases. Colocalized genetic effects had enlighted a common pathway to interfere with pathobiology underlying defect immune functions [2, 3]. Several genes are associated in multiple ADs and are included in the shared network [3, 4].

The studied variant rs1801274 in FCGR2A had been reported and it was associated with the susceptibility to multiple autoimmune diseases, including systemic lupus erythematosus (SLE), Kawasaki disease (KD), diabetes mellitus type 1 (T1D), autoimmune thyroid disease (ATD), ulcerative colitis (UC), Crohn’s disease (CD), rheumatoid arthritis (RA) [5-11], etc. However, the inadequate statistical data, ethnic differences or publication bias resulting in the controversial and inconclusive in different case-control studies. Here, we performed a meta-analysis to evaluate between FCGR2A rs1801274 polymorphisms and the susceptibility to multiple ADs.

A total of 43 relevant studies with the FCGR2A rs1801274 polymorphism and autoimmune diseases were identified through PubMed and Web of Science search, and 17 articles included KD [6, 16-21], UC [9, 10, 22, 23], CD [7, 10, 22, 24], ATD [8], RA [7, 25], T1D [7] and SLE [26, 27] met the inclusion criteria for analysis. And 8 articles included multiple case-control studies in different autoimmune diseases or different populations. Overall, 30 eligible case-control comparisons including 16760 ADs and 30585 controls were enrolled in the meta-analysis. The ethnicities encompassed in qualified studies were stratified into Caucasian, non-Caucasian European, African-American, and Asian populations. The characteristics of the selected studies were summarized in (Supplementary Table S1)

Table 1: Meta-analysis of the FCGR2A rs1801274 polymorphism in autoimmune diseases. 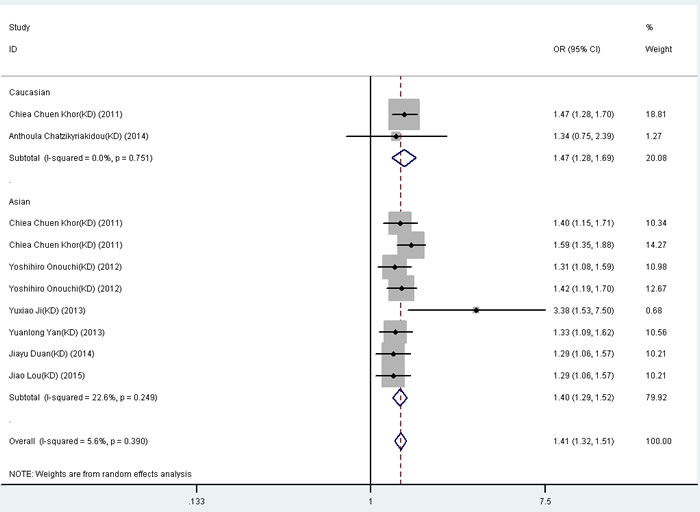 As shown in Table 1, the P value for the distribution of genotype for HWE in the control groups was calculated. Only one study in control population was not consistent with HWE. However, when studies were omitted individually from the meta-analysis to evaluate possible individual influences, heterogeneity disappear in CD and RA.

Then we pooled results according to the ethnicity of study populations. Heterogeneity was found for the FCGR2A rs1801274 A-allele and CD in Caucasian population. The study with the highest OR were then excluded, and the heterogeneity disappeared but the result remained none significant (OR = 1.067, 95% CI: 0.995-1.143, P = 0.258). 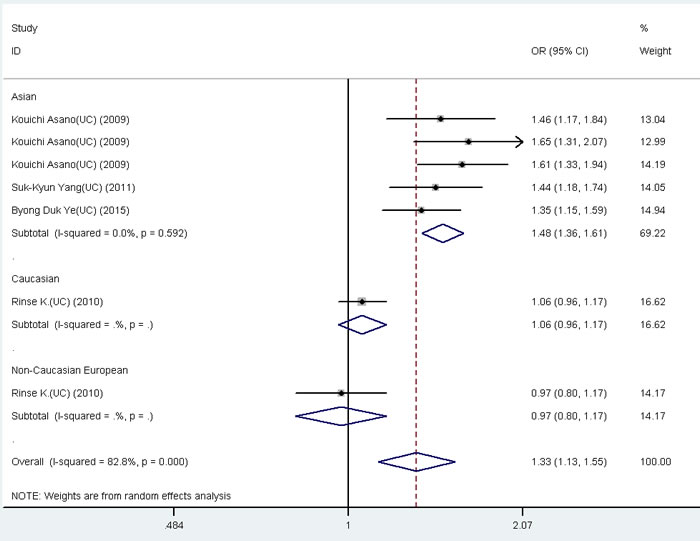 Publication bias analysis on KD, UC, CD and overall phenotypes were performed . but not on RA, SLE, ATD and T1D due to small numbers of these studies. No obvious asymmetry evidence was detected according to the shapes of the funnel plots (data not shown).

Table 2: Meta-analysis of the association between the FCGR2A rs1801274 polymorphism and multiple autoimmune diseases. 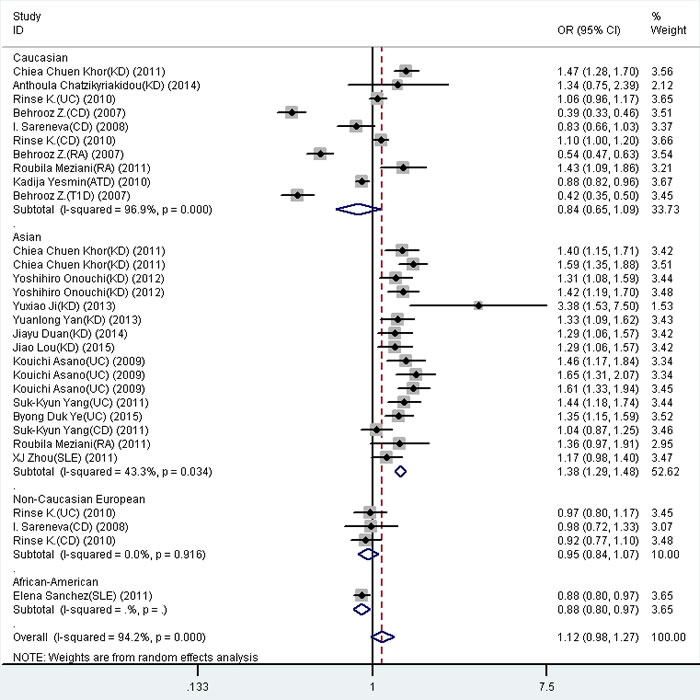 FCGR2A gene was located on chromosome 1q23, which consists of 7 exons spanning approximately 18.58 kb of genomic DNA. It encodes a member of a family of Fc γ receptors for immunoglobulin G. FCGR2A protein played an essential role in the protection against foreign antigens by removing antigen-antibody complexes in the circulation, and transduces activating signals into cells via immune receptor when ligated with immune complexes [28]. This stimulatory receptor was expressed by most leukocytes, including monocytes, dendritic cells, macrophages, natural killer cells, platelets and endothelial cells, and a subpopulation of T-cells. Upon binding of antibodies or autoantibodies, FCGR2A and FCGR3A activate immune cell functions, including phagocytosis, and the release of inﬂammatory mediators, were therefore linked to the pathogenic consequences which triggered by autoantibodies or immune complexes in multiple immune-mediated diseases [29].

The associated polymorphism FCGR2A rs1801274 was a missense variant leading to an amino-acid substitution of histidine by arginine at position 131 (H131R). The variant H131R was reported to interact differently with immunoglobulin G subclasses, and associated with the susceptibility to multiple autoimmune diseases. Specifically, the substitution of FCGR2A rs1801274 affected the Fc region of IgG receptor and determined the affinity of FCGR2A for IgG subclasses. This variant was capable of binding to and mediating phagocytosis with IgG2, potentially leading to altered immune response to infectious agents and activation of B cells and overproduction of cytokines [30].

However, owing to low prevalence or the inadequate statistical power, the discrepancy of the results was always achieved among different studies. Meta-analysis was a method of increasing the effective sample size through the pooling of datas from individual studies, thus enhancing the statistical power of the analysis for the estimation of genetic effect [31].

Several limitations of the present meta-analysis should be showed. First, for several autoimmune diseases, the number of studies is small, and this might cause insufficient power to detect slight association. Second, significant heterogeneity between-study was found in some comparisons. Third, the majority of the included studies were conducted in population of Caucasian and Asia, thus further studies in other ethnic populations were required. Fourth, the present meta-analysis was based on uncorrected estimates. A more precise analysis could be performed if the potential confounding factors including sex, age, environmental factors and other lifestyle factors were available. Thus, the results of the meta-analysis should be interpreted with caution.

A comprehensive search examining the association between the FCGR2A rs1801274 polymorphism with autoimmune diseases were conducted. by searching the following Medical Subject Heading (MeSH) terms and/or text words: ‘‘Fc fragment of IgG, low-afﬁnity IIa, receptor’’, ‘‘FCGR2A’’, ‘‘polymorphism’’, ‘‘autoimmune diseases’’, and ‘‘autoimmunity’’ in PubMed and Web of Science literature base for the period up to 2015-12-01, and relevant articles were identified for further literature filtering. A study was included if the following criteria were satisfied (1) case-control genetic association study published before June 2015; (2) genotype frequencies in the cases group and controls group were both available for estimating an odds ratios (OR) and their 95% confidence interval (CI). The exclusion criteria included: (1) studies that contained overlapping data with other literatures; (2) studies which the genotype or allele frequency could not be obtained; (3) data came from case-reports, reviews or abstracts; (4) control group did not confirm to Hardy-Weinberg equilibrium (HWE).

The following information from each study were extracted: first author’s name, publication year, country, ethnicity, genotype-methods, the number of cases and controls and allele frequencies of the FCGR2A rs1801274 polymorphism. Data extraction was performed independently by two authors, and disagreements were solved by discussion.

Statistical analysis for the meta-analysis was conducted by Stata version 10.0 (Stata Corporation, College Station, TX). This meta-analysis examined the contrast of G versus A (allelic contrast), GG versus AA (homozygote contrast), G/G+G/A versus AA (dominant models), G/G versus A/A+G/A (recessive models). The heterogeneity between studies was evaluated by Cochrane’s Q-statistic as well as I2-statistic which was used to quantify the effect of heterogeneity (I2 = 100% (Q-df)/Q) [12]. Subgroup analysis stratified by ethnicity were also performed in this meta-analysis. Meta-regression analysis was undertaken to explore potential sources of heterogeneity across studies when statistical heterogeneity was detected.

The authors declare there are no conflicts of interests.