Aging is strictly associated with an increased incidence of cardiovascular events (CVEs) in the general population. Mechanisms underlying the risk of CVEs are still unclear. Platelet activation contributes to the onset of cardiovascular complications. The incidence of atrial fibrillation (AF) increases with age, and the natural history of AF is often complicated by CVEs. We prospectively investigated the relationship between age, urinary thromboxane (Tx) B2, which reflects platelet activation, and CVEs in 833 AF patients. Median TxB2 level was 120 [66-200] ng/mg of urinary creatinine. At multivariable linear regression analysis, age (B: 0.097, p=0.005) and previous MI/CHD (B: 0.069, p=0.047) were associated with log-TxB2 levels. When we divided our population into age classes (i.e. < 60, 60-69, 70-79, ≥ 80 years), we found a significant difference in TxB2 levels across classes (p=0.005), with a significant elevation at 74.6 years. During a mean follow-up of 40.9 months, 128 CVEs occurred; the rate of CVEs significantly increased with age classes (Log-rank test, p < 0.001). TxB2 levels were higher in patients with, compared to those without, CVEs in patients aged 70-79 (p < 0.001) and ≥ 80 (p = 0.020) years. In conclusion, TxB2 levels enhance by increasing age, suggesting that platelet activation contributes to CVEs in elderly patients with AF.

Cardiovascular events (CVEs) represent the main cause of morbidity and mortality in the elderly population [1]. Several mechanisms have been proposed so far to explain the age-related incidence of CVEs. Thus, the prevalence of cardiovascular risk factors, such as smoking, hypertension and diabetes increases in elderly people. Of note is that despite increasingly effective cardiovascular preventive strategies, a portion of patients still experience cardiovascular complications.

Platelets play a key role in the process of athero-thrombosis as indicated by primary and secondary interventional trials with aspirin, which irreversibly acetylates COX1 so preventing platelet formation of the pro-aggregating eicosanoid Thromboxane (TxB) A2. These trials demonstrated, a significant reduction of CVEs in patients treated with aspirin [2, 3]. While experimental studies demonstrated a relationship between platelet activation and aging in animals [4], data in humans are inconclusive because of unreliable methods to assess platelet activation or small sample size [5-7].

Atrial fibrillation (AF) is an interesting model to explore this issue. Thus, the natural history of AF is paradigmatic of the relationship between age and CVEs, as aging is associated with enhanced AF prevalence [8] and an abrupt increase of CVEs complications CVEs [9, 10]. We speculated that platelet activation may increase by aging and be correlated with CVEs in AF. To explore this hypothesis we measured the urinary excretion of TxB2 which is a reliable marker of in vivo platelet activation and is independently associated with CVEs in AF. Aim of the study was therefore to investigate if in AF patients a relationship between aging, urinary TxB2 excretion and CVEs does exist.

Then, we divided our population into age classes (see Methods) and we found a significant difference in TxB2 levels across classes (Figure 1, p = 0.005), with a significant elevation at 74.6 years (as estimated using shape-restricted B-splines with a change-point). 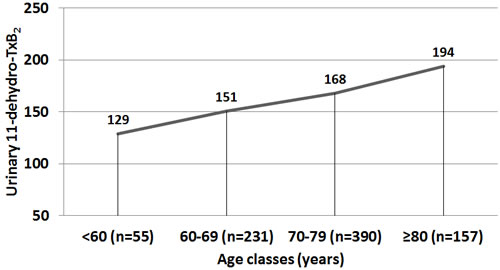 Figure 1: Excretion of urinary 11-dehydro-TxB2 according to age classes.

Table 1:Baseline characteristics of the study cohort according to the occurrence of cardiovascular events. 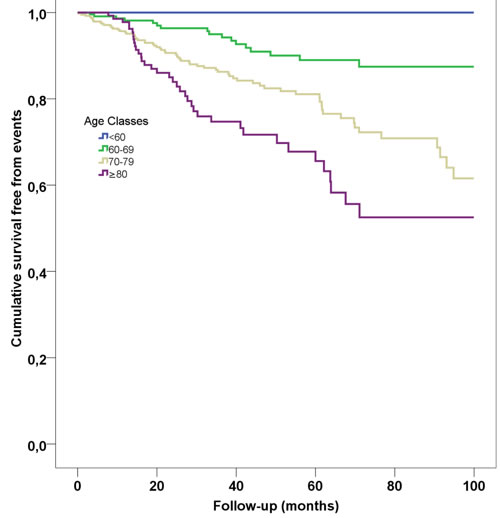 In this study we analyzed the relationship between platelet activation and aging by classifying AF patients according to decades of age and analyzing the association between platelet activation and CVEs. The novel finding of the present study is that TxB2 biosynthesis is closely related with aging, with a progressive increase across the decades and a significant elevation at age > 74 years. Prospective analysis demonstrated that poor vascular outcomes were more frequently detected in AF patients pertaining to classes 3 and 4 (age ≥ 70 years), who disclosed the highest TxB2 values.

Differently from these methods, urinary excretion of 11-dehydro- TxB2 is a more reliable test to explore platelet activation in vivo [11]. However, there are only two studies, which explored the interplay between urinary excretion of 11-dehydro-TxB2 with equivocal findings. Thus, Alessandrini et al. [7] studied serum TxB2 formation in 177 subjects undergoing laboratory screening for the presence of atherosclerotic risk factors. The Authors found no correlation between TxA2 formation and age. However, the overall young age of the cohort (mean age 48 years), and the relative small number of elderly included in the study (only 26 patients aged > 60 years old) may be responsible for this different result. Conversely, Reilly and Fitzgerald [6], in a study involving twenty apparently healthy volunteers, found an increase in vivo formation of TxA2 in older ( > 65 years) than younger ( < 40 years) subjects.

The clinical implication of this finding is that much more attention should be paid to optimize antiplatelet treatment in the elderly population at risk of CVEs. This issue is even more relevant taking into account that 1) aging negatively influences the ability of low-dose aspirin to inhibit TxB2 biosynthesis [13]; 2) aspirin treatment, in addition to anticoagulant therapy, is associated with a significant higher rate of major bleeding in AF [14].

As these data stem from AF population, further study will assess the relationship between TxB2, aging and CVEs in other at risk populations. A randomized interventional trial with drugs inhibiting platelet function (i.e. TxB2 receptor antagonists) [15], is warranted to explore the potential benefits of modulating platelet function in elderly.

In conclusion, these findings indicate that AF patients over 70 years have significant elevation of platelet activation, which may contribute to the age-related increased risk of CVEs.

At baseline, anthropometric data, as well as informations regarding concomitant treatments and comorbidities, were registered. Each patient provided a written informed consent before participating in the study. A urine sample was collected for all patients at baseline (see below).

The occurrence of the first CVE during follow-up was recorded and used for the survival analysis. The composite endpoint of CVEs included: fatal/non-fatal MI and stroke, CHD, TIA and vascular death. The definitions and adjudication of outcomes have been previously reported [16].

After collection, urine samples were stored at -80°C until use. Urinary excretion of 11-dehydro-TxB2 was measured by an ELISA commercial kit (Cayman). Data are expressed as ng/mg creatinine. Intra- and inter-assay coefficients of variation were 4.0% and 3.6%, respectively. Laboratory staff performing TxB2 analysis was unaware of clinical characteristics of patients and CVEs.

Categorical variables were reported as counts/percentage and continuous variables as mean (±standard deviation) or median (interquartile range). Student unpaired t test and Mann-Whitney U test were used to compare means and medians, and ANOVA or Kruskall-Wallis test for groups comparison. Stepwise multivariable linear regression analysis was used to assess factors associated with log-TxB2 levels, including pre-specified variables. The cumulative incidence of CVEs according to age classes was estimated using Kaplan-Meier survival analysis. P values < 0.05 were considered as statistically significant. All tests were two-tailed and analyses were performed using SPSS-18.0, SPSS Inc.

The authors declare no actual or potential conflicts of interests.

2. FitzGerald GA. Mechanisms of platelet activation: thromboxane A2 as an amplifying signal for other agonists. Am J Cardiol. 1991; 68:11B-15B.

11. Catella F, Healy D, Lawson JA and FitzGerald GA. 11-Dehydrothromboxane B2: a quantitative index of thromboxane A2 formation in the human circulation. Proceedings of the National Academy of Sciences of the United States of America. 1986; 83:5861-5865.