Methods: Matched biopsies from GC and adjacent tissues from 214 patients were used for the experiment. All coding regions of TP53 gene (exon2 to exon11) were examined using Sanger sequencing.

Gastric cancer (GC) is one of the most common malignancies worldwide, accounted for approximately 70,000 new cases and 650,000 deaths per year [1, 2]. Despite advances in diagnosis technologies, many patients still have advanced disease at diagnosis and treatment outcomes for such patients are poor [3]. Moreover, GC is heterogeneous in its clinical course and prognosis. However, underlying mechanisms to address this issue has not been fully understood.

Concerning the molecular abnormality in GC, several genetic changes in gastric carcinogenesis have been elucidated including oncogenes (KRAS, b-catenin, ERBB2, PIK3CA etc.) [4-7] and tumor-suppressor genes (CDH1, p16, TP53, ARID1A etc.) [8-11]. TP53 is the most studied gene in many cancers and may be possible candidate biomarker for GC. The gene encoding TP53 is located on chromosome 17p and consists of 11 exons and 10 introns. TP53 protein has important cellular functions, including in cell cycle regulation, apoptosis, and DNA repair [12, 13]. Even by advances in new technologies, such as whole exome sequencing, TP53 is confirmed as the most frequently mutated gene in human cancers, with alterations occurring in about half of human cancers [8-11].

Concerning the association between TP53 status and subtypes and prognosis of GC, conflicting results did not conclude the clinical significance of TP53 as a molecular marker [14-17]. We reasoned that conflicting result may be partly due to the limitation of immunohistochemistry assay that may not detect truncating type mutations (frameshift and nonsense mutations) [14], or a lack of discriminations of different types of mutation occurring throughout the coding exons. To resolve these issues, we investigated TP53 mutation spectrum throughout the entire exons in 214 GC cases. We aimed to clarify the association between clinicopathological features and prognosis of GC and TP53 mutation status with an attempt to their change types. 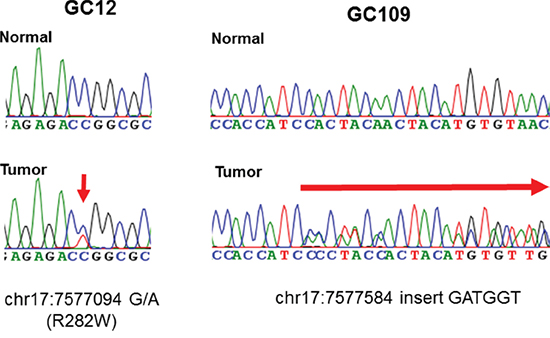 Figure 1: Representative sequencing chromatograms of two cases with TP53 mutations. Below indicates the position at chromosome. Position at codon was indicated in the parentheses (left).

We found 80 cases (37.4%) with TP53 nonsilent mutations. One tumor had 3 mutations, 3 had 2 mutations, and 76 had a single mutation, for a total of 85 mutations in this cohort. Mostly, these mutations were predicted to either truncate the protein through base substitutions, resulting in a stop codon (nonsense, 13 mutations) or a frame shift (16 mutations), multiple nucleotide polymorphism (1 mutation) or to damage the protein as predicted by SIFT analysis (52 out of 55 missense mutations) (Figure 2, Supplementary Table 2). These mutations were distributed across exon4 to exon10, but majority were in the DNA binding domain of central core region (Figure 3). Concerning the spectrum and nucleotide contexts of the substitution mutations, most frequent alterations were C:G to T:A transitions (54.4%), predominantly occurred at 5’-CpG-3’dinucleotide sites (47.1%, Table 1). 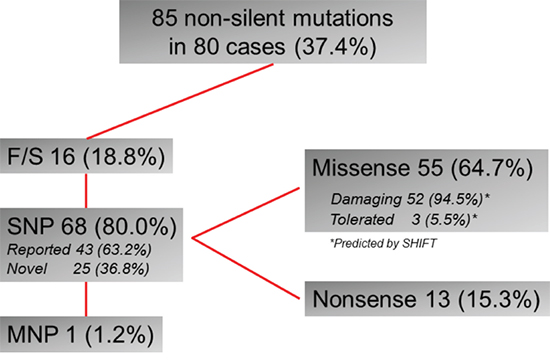 Base substitutions in coding sequences resulting in nonsynonymous changes are included (see Figure 2).

Association between TP53 mutations and clinicopathological subtypes of GC

Stage was determined for 213 cases

Lymphatic and venous invasion was determined for 73 cases

Metastasis was determined for 115 cases

Next we aimed to investigate whether TP53 mutation is associated with survival and relapse of GC patients. 210 cases were evaluated for this analysis. We did not find any significant association between overall survival and recurrence free survival among cases with or without TP53 mutation (data not shown). However, focusing on TP53 mutation hot spots within the central core (R175, G245, R248, R273, R282), which is reported to be mutated across various cancers. We found that the cases having mutation in this hot spots (6.2%, n=13) presented significantly worse overall survival and recurrence free survival compared to others (both P values =0.001, Figure 4). To confirm this result, we next conducted multivariate survival analysis using Cox's regression model to see whether the TP53 hotspot mutations would be associated with worse overall survival as an independent factor. Age, gender, histology, depth, lymph node metastasis, peritoneal dissemination, liver or other distant metastasis, staging and TP53 hotspot mutations were included for this analysis. The result demonstrated that TP53 hotspot mutations was associated with worse overall survival as an independent factor (hazard ratio=3.57, 95% confidence interval= 1.44-8.86, P=0.006, Table 5). 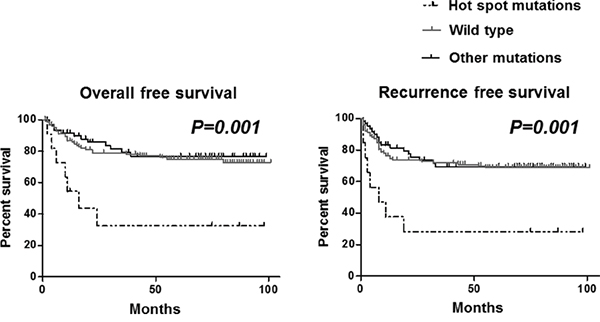 Table 6: Association between TP53 mutation in hot spots and recurrence in advanced GC

We also evaluated whether the change types (nonsense, missense or frame shift), nucleotide contexts of the substitution mutations, and locations (exons, 5’-CpG-3’ sites 5'-TpC-3') of TP53 mutations would be associated with prognosis of GC. But association were all negative except for the mutations in the hot spots (data not shown).

There are conflicting results with respect to the prevalence of TP53 mutations as well as their relationship to clinicopathological features in GC [14], which may be partly due to difference of patient constitutions or the method for detection of mutations. Immunohistochemistry assay used in many studies lacks the ability to detect truncating type mutations (frameshift and nonsense mutations). Single strand conformation polymorphism (SSCP) analysis also misses considerable percentage of mutations [14]. In this study, all coding exons of TP53 gene were screened by the Sanger sequencing. TP53 mutation frequency in our dataset was 37.4%, which was quite similar to that of recent Japanese study using the Digital PCR targeted sequencing coupled with macrodissection [11]. Other strength of our study was to use endoscopic biopsy specimens. Since the mutation detection rate seemed to be reliable even by using tiny biopsy samples, our data suggests the potential usefulness of endoscopic biopsy for the molecular analysis especially in patients with advanced stage who have no information from surgically resected specimens.

Among several clinicopathological features, TP53 mutation was more frequent in differentiated histologic type, which is in line with some previous reports [22, 23]. Of note, the correlation was striking among early stage, not observed in advanced stage. The data suggests that majority of TP53 mutated GC are differentiated histologic type in the early stage. It has been reported that progression of differentiated type GC often results in histological change to undifferentiated type [24]. It is therefore possible that considerable portion of TP53 mutated undifferentiated GCs may have originally developed as differentiated type. We also found that TP53 mutation was correlated with venous invasion in advanced GC. A similar trend was also found for more severe lymph node metastasis. This indicates mutation status reflects different biological behavior of GC. TP53 mutation has also been associated with more aggressive phenotypes of other tumor types, such as esophageal and colorectal cancers [25, 26]. Since GC with venous invasion and severe lymph node metastasis often show more aggressive biological behaviors including relapsing even after curative surgery, TP53 mutated GC may need more intensive adjuvant chemotherapy or frequent follow up to prevent relapsing after gastrectomy.

We have also shown that subset of GCs with specific TP53 mutations (hot spots within the central core: R175, G245, R248, R273, R282) is associated with worse overall survival and recurrence free survival. The worse prognosis of these mutations was also confirmed as an independent factor using the multivariate survival analysis. The same mutation type was also associated with recurrences of GC. This result emphasizes the importance of discriminating TP53 mutations to divide GC patients for better clinical implementation reflecting biological behavior. Our data suggest that hotspot TP53 mutated GC may need more intensive therapy or careful follow up even after curative resection. Importance of discriminating TP53 change types is also reported in colorectal cancer patients with poor prognosis who have mutations in R175 and G245. Although the prevalence of these mutations are not so high in all GC in our dataset (13/214, 6.2%). Significant worse prognosis of these patients suggests the potential usefulness of these mutations as a molecular marker in GC patients. Since the relationship between TP53 status and response to chemotherapy in GC patients has been conflicting [15-17], whether these mutations can predict response to chemotherapy needs to be evaluated in the larger cohort. We analyzed TP53 mutations in GC tissue, obtained by endoscopic biopsy. It should be noted that the results may not reflect the characteristics of whole part of the tumor considering the tumor heterogeneity. Still, our result showing the association between TP53 hotspot mutations and prognosis of GC would provide considerable information especially in patients who cannot undergo surgery due to the advance diseases.

During endoscopy, biopsy specimens were taken from primary GCs and adjacent normal-appearing mucosa. The specimens were immediately frozen and stored at –80°C until use. Genomic DNA was extracted directly from these frozen specimens using the standard protein precipitation method. All DNA samples were obtained before gastrectomy or chemotherapy. Through histological examination of biopsy specimens taken almost same area of the tumor tissue, we confirmed that all biopsies from cancerous tissue contained more than 70% of cancer cells. H. pylori infection status was assessed by histological analysis of both the biopsy specimens from the greater curvature of the gastric antrum and upper corpus using antibodies.

All coding regions of TP53 gene (exon2 to exon11) from GC tissues and matched normal gastric tissues were amplified using PCR reactions. These PCR fragments were sequenced using Sanger Sequencing. PCR and sequence primers are listed in Supplementary Table 1. The sequence chromatograms were visually inspected with DNA Dynamo Sequence Analysis Software (Blue Tractor Software, Llanfair-fachan, Wales, UK). All mutations were confirmed by independent PCR and sequencing reactions. We only consider the nucleotide variation as the mutations, shown in the tumor samples, not in the normal tissues. For non-silent single nucleotide substitutions, SIFT (sorting intolerant from tolerant) analysis was performed to predict whether an amino acid substitution affects protein function.

The statistical significance of the differential frequency of TP53 mutations in two groups was determined using two-tailed Fisher’s exact test. Overall survival and recurrence free survival, in relation to the TP53 mutations was assessed using the Kaplan-Meier method and the Log rank test. P value <0.05 was considered statistically significant.

No conflicts of interest exist.