Helicobacter pylori (H. pylori) infected gastric mucosa is characterized as chronic inflammation [11, 12], which is closely linked with telomere length shortening [13, 14]. These facts suggest that shortened telomere constitutes the earliest steps toward neoplastic transformation relevant to gastric cancer predisposition. In addition to this genotoxic changes, epigenetic alterations may also play a role in this process. For example, regional promoter CpG island (PCGI) hypermethylation and global DNA hypo methylation are frequently occurred in H. pylori infected gastric mucosa in relation to severity of inflammation and/or atrophy [15, 16]. Our preliminary result showed that telomere shortening correlated with DNA methylation at CDH1 gene promoter [17]. Induction of methylation in the gastric mucosa by H. pylori involves complex biological processes that are still not completely understood. The aim of this study was to investigate a potential link between H. pylori related PCGI hypermethylation and telomere length shortening in the human gastric mucosa.

Age and sex distributions, H. pylori infection status, prevalence of peptic ulcer disease and status of histological gastritis are shown in Table 1. To explore hyper methylated PCGIs in H. pylori positive gastric mucosa, we initially performed unsupervised hierarchical clustering analysis of 49 PCGIs and LINE1 among six H. pylori negative and six positive cases (Figure 1). This analysis showed that all H. pylori positive gastric mucosa was clearly clustered as hyper methylated samples compared with the H. pylori negative mucosa. Based on this result, we selected five candidate PCGIs (IGF2, SLC16A12, SOX11, P2RX7 and MYOD1) and LINE1 repetitive element for further analysis. As expected, hypermethylation of all five PCGIs were tightly linked to H. pylori infection status (all P<0.0001, Figure 2). In line with previous result showing correlation between DNA methylation and H. pylori related gastritis [16], development of pathological state from normal to mild, active, and atrophic gastritis was correlated with hypermethylation of all these PCGIs (all P<0.001, Figure S1). We also showed that lower PG I/II ratio that indicates the severity of gastric mucosal atrophy was significantly associated with hypermethylation of all these PCGIs (all P<0.05, Figure S2). 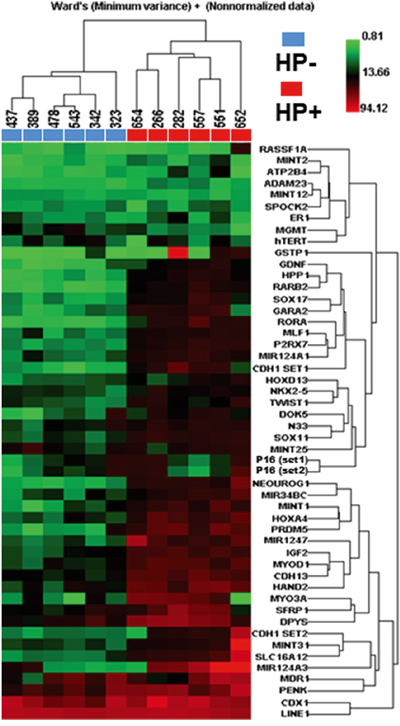 We also observed that Methylation of three PCGIs (SLC16A12, SOX11 and MYOD1) were also associated with increasing age (all P<0.05, Figure S3), while this association seemed smaller compared to the associations between methylation status and H. pylori infection, degree of histological gastritis and PG I/II ratio.

Telomere shortening in H. pylori related gastritis and its relationship with PCGI methylation 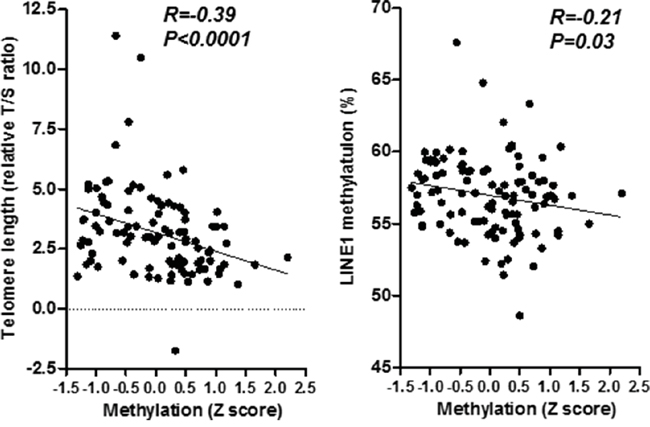 Enrolled were 106 subjects who were attending the Endoscopy Center of Fujita Health University Hospital between January 2005 and April 2010. All subjects performed upper gastroscopy for various indications such as health check, secondary complete check-up of stomach cancer following to barium X-ray examination, follow-up examination of ulcer diseases, or for the complaint of abdominal discomfort. Patients who had severe systemic disease, malignancy in the stomach or other organ, previous history of H. pylori eradication as well as continuous usage of non-steroidal anti-inflammatory drugs were not included. The cohort was partly recruited from previous studies investigating the genetic polymorphisms, and telomere length among gastroduodenal diseases [17–19]. The Ethics Committee of the Fujita Health University School of Medicine approved the protocol, and prior, written informed consent was obtained from all participating subjects.

During upper gastroscopy, biopsy specimens were taken from the antrum and the upper corpus along the greater curvature from grossly non-pathological mucosa in all patients. The specimens taken from the antrum were cut into two pieces, and one part of specimens was immediately frozen and stored at –80°C until for the molecular experiment. Genomic DNA was extracted directly from these frozen specimens using the standard protein precipitating method. Other specimens were fixed in 10% buffered formalin and embedded in paraffin for microscopic histological examination. Using hematoxylin and eosin-stained histological slides, the extent of chronic inflammation, atrophy, and metaplasia in the antrum were assessed according to the updated Sydney system [20], with each factor being scored from 0 to 3 (0, normal; 1, mild; 2, moderate; 3, severe). This assessment was performed by senior pathologists in our hospital who were blinded to the characteristics of subjects. Based on this scoring system, subjects were divided in to following four categories; Normal, all 0; Active gastritis, 2 or higher score of acute or chronic inflammation; Atrophic gastritis, 2 or higher score of acute or chronic inflammation; Mild gastritis, all others. Histological assessment also confirmed that all the specimens contained more than 70% of epithelial cells. Assessment of H. pylori infection status was performed using two biopsy specimens taken from the antrum and the upper corpus by immunohistochemistry using the polyclonal rabbit anti-Helicobacter pylori antibody (FLEX Anti-Helicobacter Pylori, Code GA523, Dako, Tokyo, Japan).

The serum pepsinogen (PG) I/II ratio was calculated based on the data of the serum PG I and PG II levels measured by radioimmunoassay in 80 cases. PG I/II ratio that showed a decrease in proportion to the severity of gastric mucosal atrophy [21 22] was used as a marker of atrophic gastritis.

Relative telomere length was measured as a comparative quantification, in particular as abundance of telomeric template vs. a single-copy gene (T/S) by quantitative real-time PCR as described previously. [23] For the quantitative real-time PCR, the iTaq SYBR Green Supermix (Bio-Rad) and ABI Prism 7900HT Real-Time PCR System (Applied Biosystems) were used. The primers for telomeres and single-copy genes (h-globin) are listed in Supplementary Table 2. Detailed protocol of experiment is available in our recent study [17].

Bisulfite pyrosequencing was used to quantify the methylation of 49 PCGIs from 47 genes. We reasoned that there might be two approaches to selecting genes (all selected from the literature), one based on frequency of methylation in gastric and other cancers (MINT1, MINT2, MINT12, MINT25, MINT31, RORA, GDNF, PRDM5, MLF1, CDH1, p16 etc.) and a separate one based on methylation in non-neoplastic inflamed/aged tissues (ER, CDH13, MYOD1, SFRP1, P2RX7, IGF2, N33, MIR124A1, MIR124A3 etc.) [24]. We also evaluated the methylation status of the LINE1 repetitive element using bisulfite pyrosequencing. Bisulfite-treated genomic DNA was used to evaluate the methylation status by the bisulfite pyrosequencing. Bisulfite treatment of DNA was carried out with BislFast DNA Modification Kit (Toyobo, Osaka, Japan) according to the manufacturer's protocol. Pyrosequencing was carried out using PSQ24 system with Pyro-Gold reagent Kit (QIAGEN, Tokyo, Japan), and the results were analyzed using PyroMark Q24 software (QIAGEN). The primers used for pyrosequencing are listed in Supplementary Table S1.