3Department of Gastroenterology, The First Hospital of Harbin, Harbin, 150001, China

4Department of Endocrinology, The First Hospital of Harbin, Harbin, 150001, China

5Department of Hematology, The First Hospital of Harbin, Harbin, 150001, China

Colorectal cancer (CRC) is the third most common cancer. Large-scale genome-wide association studies (GWAS) have been performed and reported some novel CRC susceptibility variants in European ancestry including the CDH1 rs9929218. Following GWAS and candidate studies evaluated the association between the CDH1 rs9929218 polymorphism and CRC in European, Asian and American populations. However, these studies reported inconsistent associations. Evidence shows that rs9929218 may regulate different gene expressions in different human tissues. Here, we reevaluated this association using large-scale samples from 16 studies (n=131768) using a meta-analysis method. In heterogeneity test, we did not identify significant heterogeneity among these studies. Meta-analysis using fixed effect model showed significant association between rs9929218 and CRC (P=6.16E-21, odds ratio (OR) =0.92, 95% confidence interval (CI) 0.91-0.94). In order to validate the effect of rs9929218 variant on CDH1 expression, we further performed a functional analysis using two large-scale expression datasets. We identified significant regulation relation between rs9929218 variant and the expression of CDH1, ZFP90, RP11-354M1.2 and MCOLN2 by both cis-effect and trans-effect. In summary, our analysis highlights significant association between rs9929218 polymorphism and CRC susceptibility.

Colorectal cancer (CRC) is the second leading cause of cancer death in developed countries [1]. It is a common complex human disease caused by the combination of genetic variants and environmental factors [2–3]. Large-scale genome-wide association studies (GWAS) and pathway analysis of GWAS datasets have been widely performed to identify common genetic variants or pathways contributing to human disease susceptibility [1, 4–15]. 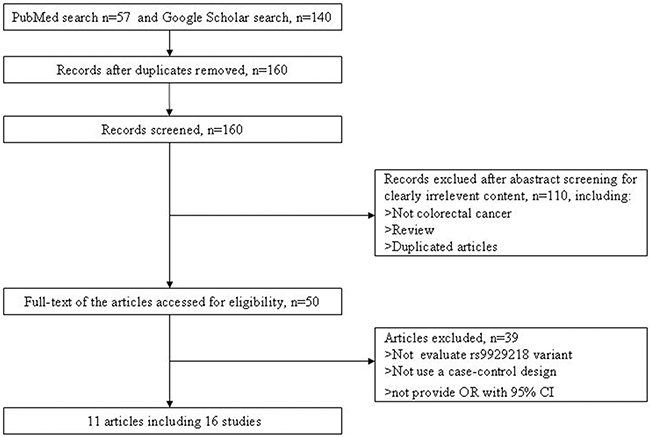 Figure 1: Flow diagram of selection of studies included in the current meta-analysis for the association between rs9929218 polymorphism and CRC.

Considering no significant heterogeneity in all the selected studies, we calculated the overall OR by the fixed effect model. The meta-analysis results showed significant association between rs9929218 and CRC (P=6.16E-21, OR=0.92, 95% CI 0.91-0.94). Detailed results are described in Figure 2. 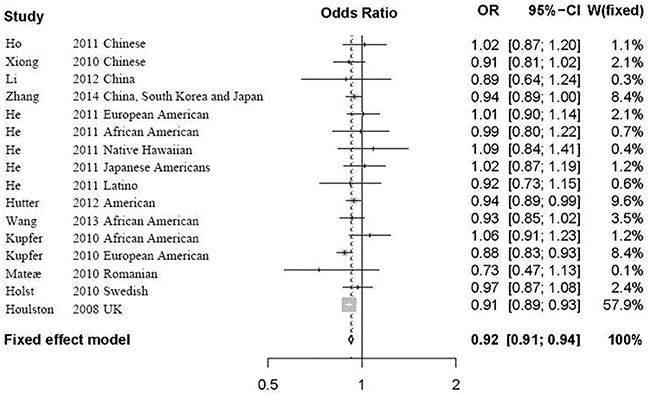 Figure 2: Forest plot for the meta-analysis of rs9929218 polymorphism using an additive model. According to Table 1, 11 articles including 16 independent studies were finally selected for our following analysis. In Figure 2, we list the name of the first author, the year of publication, the population or ethnicity, the OR with 95% CI and the weight in meta-analysis. The overall OR was calculated by the fixed effect model. OR, odds ratio; CI, confidence interval; fixed, fixed effect model.

The sensitivity analysis showed that the association between rs9929218 and CRC did not vary substantially. We also excluded the most two large-scale studies from Houlston [16] and Zhang [19] at a time. We observed no heterogeneity in other studies with P=0.3517 and I2 = 9.2%, and identified significant association between rs9929218 and CRC with P=1.79E-05. Evidence from the linear regression test suggests no significant publication bias with P= 0.03689. The funnel plot is a symmetrical inverted funnel as described in Figure 3. 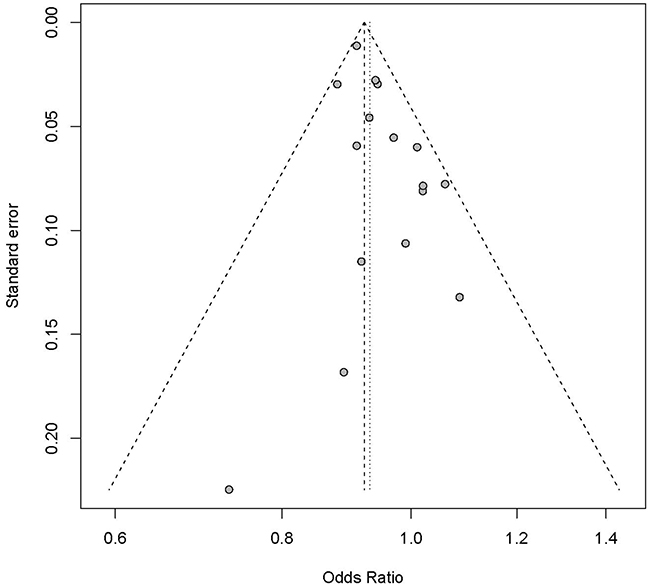 Figure 3: Funnel plot for publication bias analysis of the selected studies investigating the association between rs9929218 polymorphism and CRC. The X-axis stands for the ORs and the Y-axis is the standard error for each of the 16 studies. A linear regression based approach proposed by Egger et al. is used to evaluate the asymmetry of the funnel plot.

GWAS reported rs9929218 to be significantly associated with CRC in European ancestry [16]. Following studies investigated this association and reported inconsistent results. Here, using a comprehensive search in the PubMed and Google Scholar, we reevaluated this association using large-scale samples from 16 studies. Using two genetic heterogeneity test methods Cochran’s Q-statistic and I2statistic, we did not identify significant heterogeneity among these 16 studies. Using a fixed effect model for meta-analysis to calculate the overall OR, we identified significant association between rs9929218 and CRC (P=6.16E-21, OR=0.92, 95% CI 0.91-0.94). The sensitivity analysis and publication bias further supported our results to be robust. After excluding the two large-scale studies from Houlston [16] and Zhang [19], we still identified significant association between rs9929218 and CRC.

Evidence shows that eQTL may modify gene expression and influence risk for human diseases [27–29]. In order to validate the effect of rs9929218 variant on CDH1 mRNA expression level, we performed eQTLs analysis using a large-scale dataset from the peripheral blood samples and multiple human tissues from GTEx. We identified significant regulation relations between rs9929218 variant and gene expression including CDH1, ZFP90, RP11-354M1.2 and MCOLN2 by both cis-effect and trans-effect. Recently, Closa et al. analyzed the association between genotypes for 26 GWAS SNPs and the expression of genes within a 2 Mb region (cis-eQTLs) using Affymetrix Human Genome U219 expression arrays with 47 samples from healthy colonic mucosa and 97 samples from normal mucosa adjacent to colon cancer [26]. In all the samples, the cis-eQTL analysis showed significant association between rs9929218 variant and GFOD2 expression with P=3.90E-03 [26]. Closa et al. further reported significant association of rs9929218 variant with expression of TSNAXIP1, HSF4 and NUTF2 in tumor tissue eQTL analysis with P=5.50E-03, P=6.70E-03 and P=1.70E-03, respectively, but not in normal tissue eQTL analysis with P=0.59, P=0.54 and P=0.27, respectively [26].

Here, we reinvestigated the association between rs9929218 and CRC using an additive model as descried in Figure 2. It is reported that this model performs well when the true underlying genetic model is uncertain [32]. Analyzing the association between rs9929218 and CRC using dominant and recessive models is also required. However, the original genotype data are not publicly available. Future studies with genotype data are required to replicate our findings. In summary, our findings show that rs9929218 polymorphism contributes to CRC susceptibility.

We searched the PubMed database to select all possible studies with the combined key words including ‘CDH1’, ‘rs9929218’, ‘polymorphism’, or ‘variant’ and ‘colorectal cancer’, ‘colon cancer’, ‘rectal cancer’, or ‘bowel cancer’. We also used the Google Scholar to query the articles citing CRC GWAS and select all associated publications. There was no language and sample limitation, and the literature search was updated on October 28, 2015. This search was performed by two independent individuals to identify potential publications meeting our inclusion criteria (see below), with differences resolved by discussion with a third reviewer. More detailed information about the search strategy is described in previous studies [33–35].

Two authors reviewed and extracted information from all eligible publications independently, according to the inclusion and exclusion criteria listed above. The following items were extracted including (1) the name of the first author; (2) the year of publication; (3) the population and ethnicity; (4) the numbers of CRC cases and controls; (5) the OR with 95% CI or (6) to calculate the OR and 95% CI; If there is a conflict, both reviewers discuss with third reviewer and reach an agreement. For rs9929218 polymorphism A/G alleles, we selected the additive genetic model: A allele versus G allele for further meta-analysis [36–40].

Here, we used two kinds of meta-analysis models including the fixed effect model (Mantel-Haenszel) and random-effect model (DerSimonian-Laird) to calculate the pooled OR. If there is no significant heterogeneity among the included studies, the pooled OR is calculated by the fixed effect model; otherwise the OR is calculated by random-effect model [41–46]. Z test is used to determine the significance of OR. R Package is used to compute all statistical tests [41–46]. A significant levels (P < 0.01) indicates significant association between rs9929218 and CRC. Using sensitivity analysis, each study is omitted at a time to assess the influence of single study on the association between rrs9929218 and CRC. A funnel plot proposed by Egger et al. is used to investigate potential publication bias [41–46]. A linear regression based approach proposed by Egger et al. is used to test for publication bias, and provide statistical evidence to evaluate the asymmetry of the funnel plot to. with the P < 0.01 indicating that there was a significant publication bias [47]. All statistical analyses were performed using R Package [41–46].

To validate the effect of rs9929218 variant on CDH1 mRNA expression level, we performed an expression quantitative trait loci (eQTL) analysis using a large-scale eQTL dataset, which is from a meta-analysis in non-transformed peripheral blood samples from 5,311 individuals with replication in 2,775 individuals [48].

We also investigate the effect of rs9929218 variant on CDH1 mRNA expression using the Genotype-Tissue Expression (GTEx) project (http://www.gtexportal.org/home/), which provides a scientific resource to study human gene expression and regulation and its relationship to genetic variation [49]. Here, we selected all the human tissues with the number of genotyped samples > 60 in the following eQTL analysis [49].

This work was supported by funding from the National Nature Science Foundation of China (Grant No. 81300945), Heilongjiang Postdoctoral Financial Assistance (Grant No. LBH-Z15141), and Health and Family Planning Commission of Heilongjiang Province Research Projects (Grant No. 2014-349).