Materials and Methods: We retrospectively enrolled 416 patients who underwent nephrectomy at a single institute between 2008 and 2009 and detected their intratumor galectin-7 expression by immunohistochemistry. Kaplan-Meier method was conducted to plot survival curves and multivariate cox regression analysis for potential independent prognostic factors on OS. A nomogram was constructed with concordance index (C-index) and Akaike’s Information Criteria (AIC) to appraise prognostic accuracy of different models.

Renal cell carcinoma, the most prevalent solid tumor of kidney malignancies, represents 2–3% of all human cancers [1]. Clear cell renal cell carcinoma, the commonest histological type of RCCs, has the worst prognosis with an average 5-year survival at 71% [2]. Although the prognostic values of traditional clinic-pathologic factors, such as pathological T, N stages, metastasis, the presence of necrosis, sarcomatoid and LVI, as well as ECOG-PS have been addressed, their combined impacts on ccRCC prognosis is however scattered [3]. Recently, novel models combining conventional clinic-pathologic factors with molecular biomarkers had been established to provide more precise prediction for overall and recurrence-free survival, aid patient management and treatment [4–6]. Hence, it’s promising to seek new molecules to optimize present prognostic systems.

Galectins, a subgroup of the lectin family, known for their ability to bind to N-linked or O-linked glycosylated β-galactoside sugars, universally participate in cancer initiation, progression and metastasis [7]. It’s reported that galectins expression changes in carcinoma cells under micro-environmental stress conditions during tumor development [8], thereby can be potentially novel prognosticators and targets [9]. Galectin-7, a homodimer galectin, is implicated in various biological effects including cell proliferation, differentiation, apoptosis, collective cell migration and immune-modulatory [10–13], which plays a completely discrepant role in different types of cancers. On the one hand, galectin-7 was affirmed as a p53 induced protein and may participate in the pro-apoptotic function of p53 [14], thereby suppresses tumor growth [15]. Ueda, S et al. verified it as a tumor suppressor in gastric cancer [16] and Tsai, CJ et al reported elevated galectin-7 expression as a benign predictor in squamous cell carcinoma of the cervix and was associated with better outcomes after radiotherapy [17]. On the other hand, galectin-7 can boost MMP-9 expression and impede p53 expression, thereby promotes tumorigeneses and induces chemoresistance [18–20]. Demers, M. et al. and Labrie, M. et al. reported galectin-7 was associated with cancer metastasis and chemo-resistant in breast and ovarian cancers, respectively [21, 22]. Although all these important roles of galectin-7 in cancers of different histologic types had been identified, there haven’t any reports about the relationship between galetin-7 expression and RCC, whether it can promote or suppress tumor progression in RCC remained uncertain and its prognostic power in RCC needed to be declared.

According to the correlation analyses, higher galectin-7 expression was associated with the presence of necrosis (P = 0.015), while other clinic-pathologic variables were presented to have no significant correlation with galectin-7. Furthermore, there was no significant discrepancy between the patients in galectin-7 high and low group regarding UISS score, Leibovich score and SSIGN score (Table 1).

*Fisher’s exact test; chi-square test for all the other categorical variables and students’t-test for all continuous variables.

High expression of galectin-7 is associated with worse overall survival 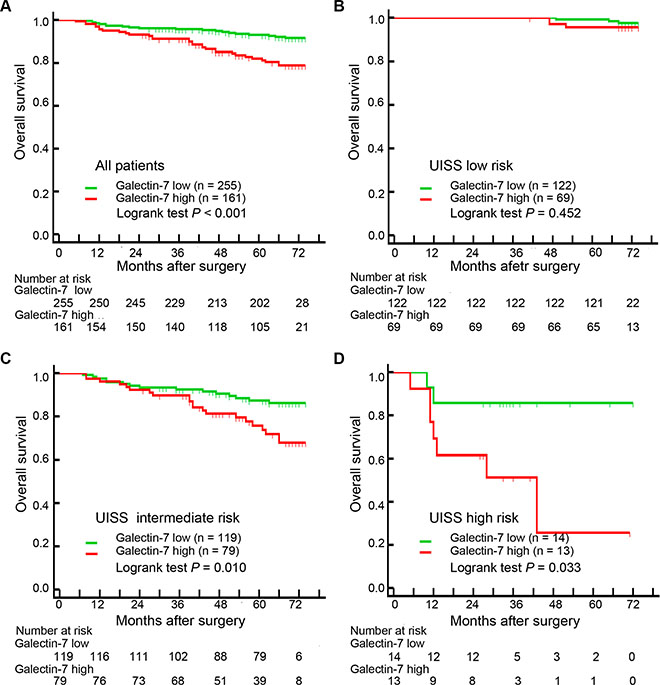 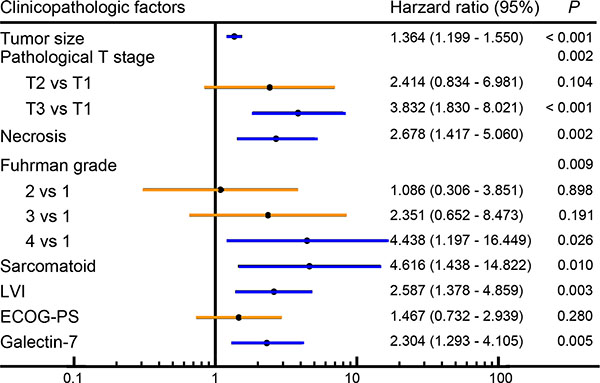 Table 2: Comparison of the predictive accuracy of the established nomogram with known prognostic models

Establishment and validation of prognostic nomogram for OS

According to preceding analyses, Fuhrman grade 2 can’t well different from Fuhrman grade 1 (hazard ratio = 1.080; 95% CI, 0.306–3.851; P = 0.898) for predicting OS (Figure 3), hence we combined Fuhrman grade 1 and 2 to single Fuhrman 1 + 2 for further nomogram building-up without compromising the model robustness. All the independent predictive factors were cooperated to establish a prognostic nomogram (Figure 4A). The nomogram illustrated that tumor size contributed largest to the prognostication (weighted ratio = 0.414), while necrosis, LVI as well as galectin-7 showed a minor impact on outcome (weight ratio = 0.079, 0.075, 0.071, respectively). The calibration plots manifested an excellent consistency in bootstrap analysis between the calculated and real observation for 3-year and 6-year OS (Figure 4B–4C). 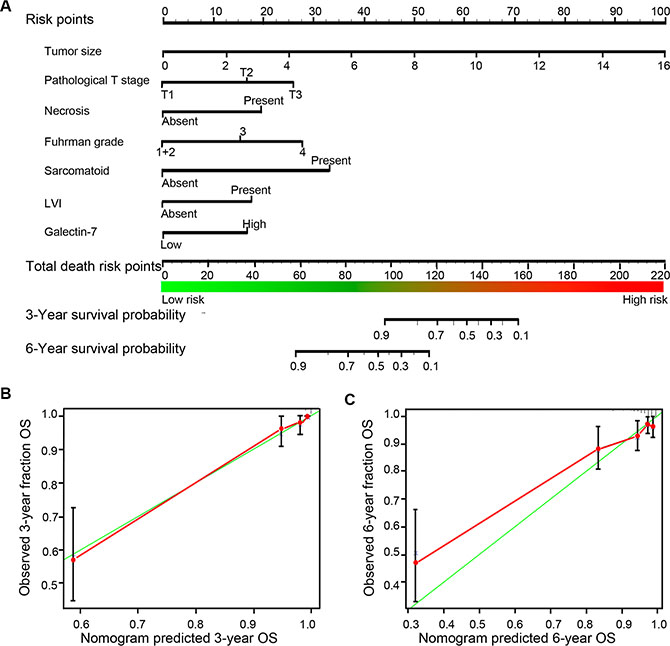 The comparison among the established nomogram and known predictive models for OS was conducted to assess the predictive power of the new model. It’s displayed that the Harrell’s C-index for the built-up nomogram to predict OS (0.854) was significantly larger than that of the UISS score (0.743), Leibovich score (0.816) and SSIGN score (0.805), while the AIC was smaller than these models (474.5 vs 556.8, 512.4 and 512.8, respectively) (Table 2). This superior performance of nomogram manifested it’s an excellent predictive models for OS in patients with non-metastasis ccRCC.

Consistence with reports in breast, ovarian and oral squamous cell carcinoma [19, 22, 23], elevated galectin-7 expression acted as a reverse predictive factor in non-metastasis ccRCC patients. This finding may result from the function of galectin-7 in enhancing tumor cells aggressiveness and inducing chemo-resistance [19]. However, our study excluded these patients with metastasis ccRCC, yet the expression level of galectin-7 still performed well in predicting overall survival, which revealed galectin-7 may participate in other cellular biochemistry progresses in ccRCC progression and metastasis beyond the known functions. Furthermore, previous study revealed that in normal kidney tissues, galectin-7 can selectively bind to cilia, increase cilia length and promote polarized epithelial repairing [24]. However, in cancerous renal tissue, galectin-7 may manifest completely different functions. Take the uterus for examples, galectin-7 up-regulate MMP-9 expression, thereby promotes tumor progression and metastasis in cervical squamous carcinoma [25], while in normal uterus, it promotes uterine repair following menstruation [26]. Our study revealed the correlation of galectin-7 expression and overall survival in non-metastasis ccRCC, which shed a light on the potentially different functions of galectin-7 in ccRCC from normal kidney tissues.

Similar to galectin-1, 3, 8 and 9, high galectin-7 expression acts as an adverse predictor for survival in patients with RCC [27–30]. In RCC, galetin-1 can activate HIF-1α-mTOR signaling axis, enhance the migration ability of tumor cells, and promote tumor progression [27]. Elevated galectin-3 expression was correlated with higher Fuhrman grade in RCC and predict worse overall survival [28]. Galectin-9 expression was positively associated with tumor size, Fuhrman grade, and necrosis and was an independent prognostic indicator for OS in ccRCC [30]. However, different from galectin-1,3 and 9, high galetin-7 expression is specifically relevant to the present of necrosis in non-metastasis ccRCC, which is similar to the characteristic of galectin-8 in pT1 ccRCC [29]. This specific relevance might derived from the ability of galectin-7 in enhancing the pro-apoptosis function of p53 and triggering further cell death signaling pathways. Considering the possible function of galectin-7 expression in activating cell necrosis in ccRCC, it may be targeted to decrease necrosis, lower inflammatory burden [31] in ccRCC and improve patients survival.

Despite the clinical significance of galectin-7 in non-metastasis ccRCC has been presented, several constraints of this study require further discussion. First, given the heterogeneous feature of ccRCC and the single hospital sampled population of our study, our result might overestimate the prognostic power of galectin-7. Second, the relative expression level of galectin-7 was cutoff based on the intensity of immunohistochemistry staining, which made the intermediate intensity hard to define. The more quantitative measurement, such as serum test might be more dependable. Third, our study constrain the population in non-metastasis ccRCC, the potential association between galectin-7 and metastasis ccRCC or other RCC needs to be explored.

In conclusion, our study galectin-7 expression in tumor tissue as a potential independent predictive factor for OS in patients with non-metastasis ccRCC. Integrating galectin-7 expression with conventional clinical pathologic factor could establish a novel nomogram which shows a better prognostic accuracy than traditional score systems and helps guiding patients management.

The database included 416 consecutive patients with non-metastasis ccRCC at Zhongshan Hospital (Shanghai, China) between 2008 and 2009. The original inclusive criteria: (a) confirmed post-operative histopathology diagnosis as clear cell RCC; (b) no radiotherapy or chemotherapy before surgery; (c) with N = 0, M = 0 and T ≠ 4 based on 2010 AJCC TNM classification [32]. This study was admitted by the hospital’s ethics review committee, and informed consents were accessed by phone-call from each patient. The information of clinical characteristics were collected for each patients and the UISS, Leibovich and SSIGN scores were collected according to original scoring protocols [33–35], respectively. Based on these predictive models, all patients were divided into 3 groups: low risk group (LR; UISS = 1, Leibovich = 0–2, SSIGN = 0–2, respectively), intermediate risk group (IR; UISS = 2; Leibovich = 3–5, SSIGN = 3–5, respectively) and high risk group (IR; UISS = 3; Leibovich ≥ 6, SSIGN ≥ 6, respectively).

Primary formalin-fixed, paraffin-embedded tissues were collected from Zhongshan Hospital (Shanghai, China) and tissue microarrays and immunohistochemistry were performed as previously described [36]. As briefly described, all samples were reviewed histologically by hematoxylin and eosinstaining, and representative areas were marked on the paraffin blocks away from necrotic and hemorrhagic materials. Duplicate 1.0-mmtissuecores from 2 different areas were used to construct the tissue microarray. Sections from the TMA blocks were cut at 4 um. Anti-galectin-7 antibody (1:100, Abcam, ab108623) was used to perform the immunohistochemistry staining. Immunohistochemistry sections were scanned by an automated microscopy system (Leica DM6000 B, Leica Microsystems GmbH, Mannheim, Germany), images were captured by Leica CV-M2CL camera and sent to 2 pathologists without knowing the patient outcomes to score (H - score) as previously described [36].