Warburg effect is an enabling hallmark of cancer cell metabolism [1]. The excessive glycolysis provides cancer cells with not only ATP but also biosynthetic intermediates for rapid growth and proliferation. In contrast, normal cells have a low glycolytic rate and rely most on OXPHOS for maintaining energy homeostasis [2]. Since Warburg firstly reported the phenomenon, the switch from OXPHOS to aerobic glycolysis in cancer cells has attracted extensive attention. Its molecular basis, through yearly investigations by many researchers, has been largely unraveled. Up-regulation of glycolytic enzymes and glucose transporters via activation of Myc [3, 4], Ras [5, 6], Akt [7-9], and inactivation of p53 [10, 11] are the biochemical basis for high glycolytic rate. The switch of some glycolytic enzyme isotypes, such as switch from other PK isotypes to PKM2, also plays a part [12, 13]. Some cancer cells also exhibited Impaired mitochondria metabolism, including mutations of succinate dehydrogenase [14], fumerate hydratase [15], isocitrate dehydrogenase 2 [16-18] in Krebs cycle, and mutations in mictochondria DNA that affects respiratory chain, among others.

Despite the tremendous progress in understanding cancer cell metabolism and its regulation, the roles of small molecules in regulating cancer energy metabolism have not been extensively investigated. Lactate and proton are 2 ions commonly accumulated in tumor tissues. Lactic acidosis arises as a result of Warburg effect and the hypoxic environment further enhances glycolysis [1, 19]. The disorganized vasculature and dysfunctional capillary cause poor perfusion that permits accumulation of lactate and proton [20-23]. Hence, intratumoral lactate can reach as high as 40 mM [24] and pH as low as 6.0 [25, 26], creating a lactic acidosis condition. Lactic acidosis play multifaceted roles in tumor progression: knockdown of LDH-A diminished the tumourigenicity of cancer cells [27]; decreasing the lactate fermentation by displacing PKM2 with PKM1 reduced cancer cells’ ability to form tumors in nude mice [12]; acidosis was potentially important for promoting tumour metastasis [28] and cancer progression including cancer cell metabolism [29, 30] and survival [31, 32], chromosomal instability [33, 34], and tumor angiogenesis [34, 35]. Clinical studies demonstrated that high level of lactate was a strong prognostic indicator of increased metastasis and poor overall survival [28, 29, 33, 34, 36-38].

We randomly picked 9 cancer cell lines from different organ origin, so that the results could reflect general traits of cancer cells. All these cell lines, except SiHa, showed typical Warburg phenotype, as they excessively consumed glucose and converted 79 to 92% incoming glucose to lactate, as calculated according to the lactate generated/glucose consumed ratio (Figure 1). SiHa cells were relatively oxidative [29] and our data also showed that this cell line consumed smallest amount of glucose and generated least lactate among 9 cell lines (Figure 1). When these cells were cultured under lactic acidosis, glucose consumptions were dramatically reduced. Furthermore, except A549 which generated a little amount of lactate, other cells consumed lactate in culture medium, albeit to a negligible extent. These results were consistent with our previous reports [30, 32, 33, 39]. 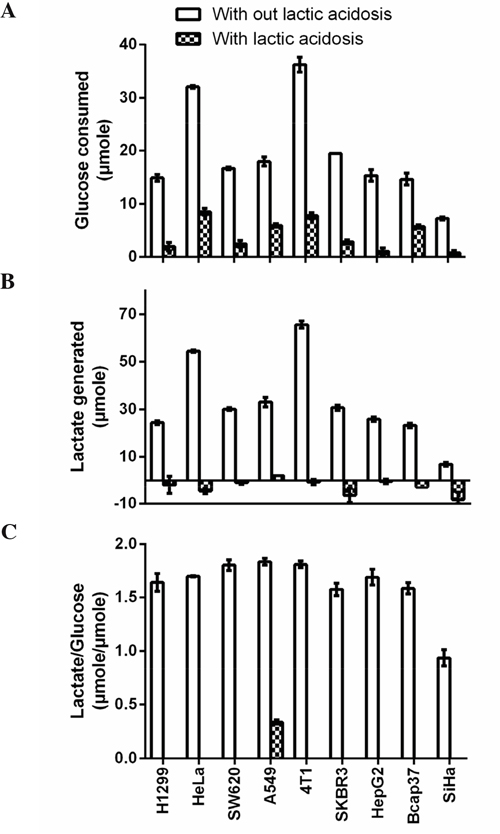 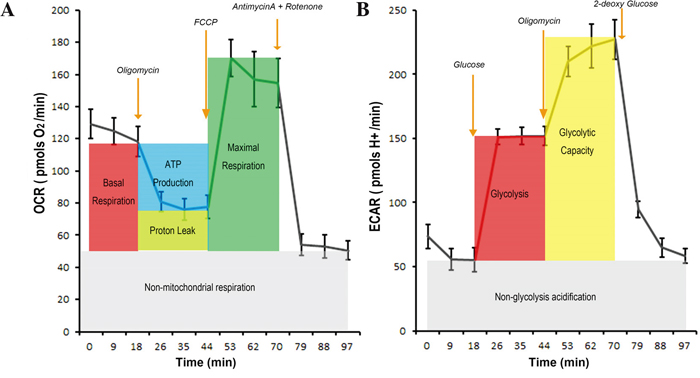 Figure 2: The procedure to measure the OXPHOS-linked oxygen consumption rate and glycolysis-linked proton production rate and the quality controls. A. Measurement of OXHPHOS-linked oxygen consumption rate (OCR). H1299 Cancer cells were incubated in Seahorse-XF assay medium and the basal OCR value (summation of OXPHOS-linked OCR, the OCR associated with proton leak along respiratory chain, and the OCR irrelevant to mitochondial respiration) were obtained. When oligomycin A, an inhibitor of ATP synthase, was added, OXPHOS-associated OCR, but not the other two, was blocked. Addition of FCCP, a chemical uncoupler of electron transport and oxidative phosphorylation, maximized electron flow along the respiratory chain and the oxygen consumption. Finally, rotenone (an inhibitor of respiratory complex I) and antimycin (an inhibitor of respiratory complex III) were added to completely stop electron transfer along respiratory chain hence blocked OCR associated with ATP synthesis and proton leak. The remaining OCR was irrelevant to activity of mitochondrial respiration. B. Measurement of glycolysis-linked proton production rate (PPR). H1299 cancer cells were cultured in Seahorse-XF basal medium deprived of glucose and the basal proton production rate was obtained. Addition of glucose increased PPR and this increment represented glycolysis-associated PPR. Further addition of oligomycin maximized PPR because of Pasteur effect. Finally, 2-DG was added and the PPR was returned to the basal level hence glycolysis-associated PPR was confirmed. These procedures with proper quality controls were used to measure OXPHOS-associated OCR and glycolysis-associated PPR throughout this study.

To calculate ATP output from glycolysis, the extracellular acidification rate (ECAR) was measured (Figure 3A upper panel). The ECAR was then converted to proton production rate (PPR). At steady-state glycolysis, the stoichiometry between PPR and ATP output rate is 1. Therefore, ATP production rates from glycolysis in 9 cancer cell lines were between 19.5-69.4 pmoles / (min ·10000 cells) (Figure 3A low panel). 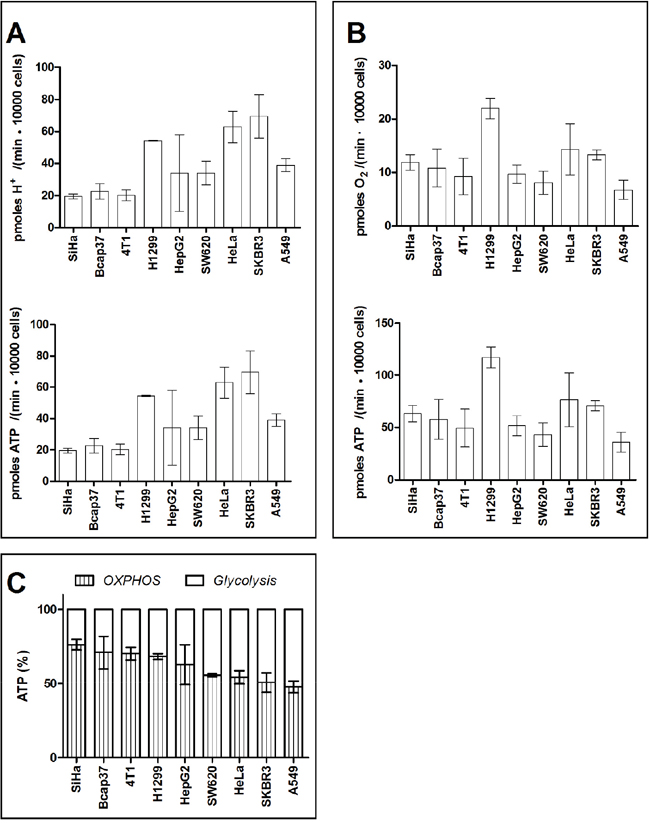 The data are agreeable with the Warburg’s measurement. Warburg indicated in his ‘On the Origin of Cancer cells’ [40] that “This, converted to energy equivalents, means that the cancer cells can obtain approximately the same amount of energy from fermentation as from respiration, whereas the normal body cells obtain much more energy from respiration than from fermentation”. In this study, OXPHOS and glycolysis provided comparable rates of ATP in SW620, Hela, SKBR3, and A549.

Taken together, the data agrees with the previous reports. 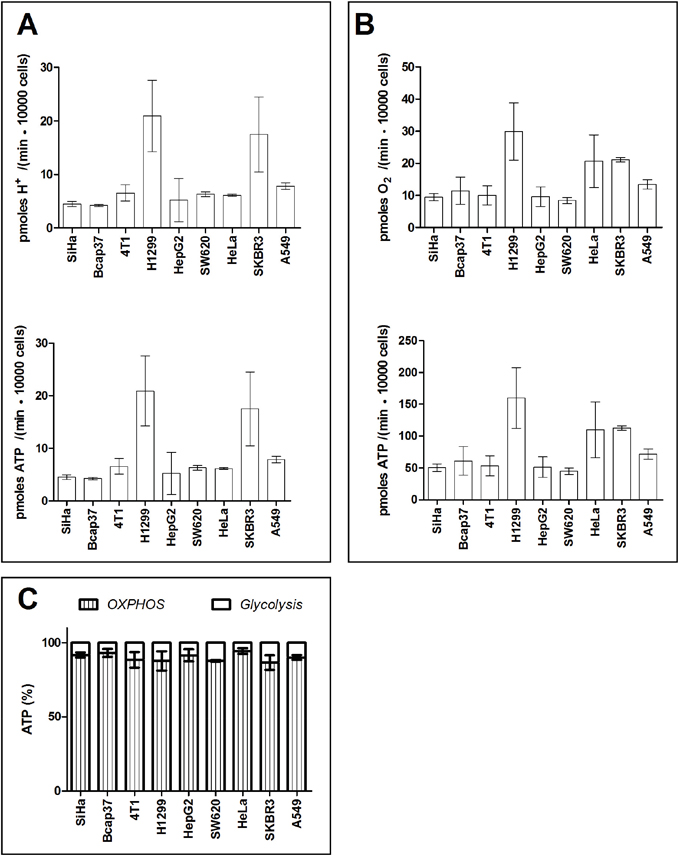 The underlying mechanism for lactic acidosis to revert cancer cells from aerobic glycolysis to OXPHOS was deciphered in our previous publication [30, 39]. First, under regular culture, the cytosolic pH was 7.3 and the cytosolic lactate was around 2 mM, whereas under lactic acidosis (20 mM lactate, pH6.6), the cytosolic pH decreased to 6.9, and cytosolic lactate increased to 20 mM [30]. Second, the 0.4 unit decrease of pH dramatically reduced the glycolysis rate, because glycolytic enzymes including HK and PFK1 and glucose transporter were sensitive to proton inhibition [30]. Third, the increase of cytosolic lactate brought the mass action ratio of lactate dehydrogenase(LDH)-catalyzed reaction approaching to equilibrium constant, thereby the forward and backward rate of the reaction was nearly equal [30, 39] (note that cytosolic pyruvate concentration and the cytosolic free [NAD]/[NADH] kept nearly constant hence the lactate concentration became the major variable of mass action ratio of this reaction).

Taken together, the switch between Warburg and non-Warburg phenotype under lactic acidosis is simply due to the proton effect on glycolysis and lactate concentration on the LDH-catalyzed reaction status (equilibrium or non-equilibrium).

1×106 cells were seeded into 25cm2-culture flask (Corning) with complete RPMI-1640 medium to allow attachment overnight in a humidified CO2 incubator. The culture medium were replaced with 10 ml fresh RPMI-1640 medium with 6 mM glucose on the following day. 24 hours later, culture medium was collected for glucose and lactate concentration determination. The glucose consumption and lactate generation were determined enzymatically as described previously [32]. In the lactic acidosis condition, the culture medium was the same as above except that the medium contained 20 mM lactate with a pH 6.6. In our previous studies, we defined that under such lactic acidosis condition, cancer cells consumed glucose slowly and generated negligibly amount of lactate [30, 32, 33, 39]. Therefore, lactic acidosis condition (20 mM lactate with pH 6.6) were used throughout the study.

The experiments were performed according to Seahorse XF96 manual. 1 X 104 (4T1 cells) or 2 x 104 (other cell lines) in 80 μL complete RPMI-1640 medium were seeded in 96 well XF Microplate (Seahorse Biosciences), and incubated at 37°C with 5% CO2 overnight to allowed full attachment. Then, cells were washed twice with Seahorse XF basal medium prewarmed to 37°C followed by addition of 175 μl Seahorse XF basal medium, and equilibrated at 37°C without CO2 for 60 minutes. The Seahorse XF analyzer used one cartridge plate with 96 optical oxygen and pH sensors to measure dissolved oxygen and pH change in 96-well microculture plate. The plungers in the cartridge plate mixed assay medium in each well for 4 minutes to allow dissolved oxygen and pH to reach equilibrium before each rate measurement. For measurement of rate, the plungers covered the cell layer, and isolated a small chamber with volume less than 3 μl. The optical sensor at the end of plunger monitored O2 concentration and pH periodically over 3 minutes, and the OCR and extracellular acidification rate (ECAR) value were calculated by the slope of these parameters vs. time. With the predetermined buffer capacity, Seahorse XF analyzer calculated proton production rate (PPR). After measurement, the plungers ascended, and the media were re-mixed to allow re-equilibrium. Baseline rate were measured 3 times. According to the manufacturer’s instruction, the cell density gives an OCR between 50-150 pMoles/min and consistent monolayer was considered optimal. We adjusted the number of cells to fit the window of OXPHOS rate. We did cell titration using 4T1 cells (Supplementary Figure 1) For other cells, we did not do cell titration, but simply fit the OXPHOS rate into the measurement window recommended by the manufacturer.

For OCR measurement, the assay medium used was unbuffered DMEM medium (Seahorse biosciences), supplemented with 10mM Glucose and 1mM pyruvate, with or without lactic acidosis. The oligomycin, FCCP, antimycin/rotenone were preloaded into the delivery chambers in the cartridge plate and sequentially injected into each well at the optimized concentration. The last baseline value and the most changed value after each injection were taken for data analysis. The difference between baseline OCR and oligomycin response OCR is the oxygen consumption related to ATP production: OCRbasal – OCRoligomycin=OCR ATP production

For glycolysis rate determination, the assay medium used was XF base medium (Seahorse Biosciences), supplemented with 2 mM glutamine, with or without lactic acidosis. Glucose, oligomycin and 2-DG were injected into each well sequentially. The last PPR value before chemical injection was taken as the basal PPR (PPRbasal), and the biggest PPR after glucose addition was taken as the response to glucose (PPRglucose). The glycolysis related PPR (PPRglycolysis) = PPRglucose- PPRbasal.

In the procedure of OCR measurement, when the oxidative phosphorylation uncoupler FCCP is added, oxygen consumption by the respiratory chain was resumed, when rotenone (complex I inhibitor) and antimycin A (complex III inhibitor) were added, the electron transfer as well as oxygen consumption by the respiratory chain was blocked. This confirmed that oligomycin-blocked oxygen consumption was associated with OXPHOS. In the procedure of ECAR measurement, oligomycin addition enhanced ECAR, a reversed Pasteur Effect, and 2-DG addition blocked proton production, confirming that proton generation was associated with glycolysis.

After determination, 3 parallel wells of cells were counted to normalize the measured data.

This work has been supported in part by the China National 973 project (2013CB911303), China Natural Sciences Foundation projects (81272456, 81470126) and the Fundamental Research Funds for the Central Universities, National Ministry of Education, China, to XH, and Natural Sciences Foundation project (81301707) to HW. The funders have no role in study design, in the collection, analysis, and interpretation of data, in the writing of the report, and in the decision to submit the paper for publication.

6. Ramanathan A, Wang C, Schreiber SL. Perturbational profiling of a cell-line model of tumorigenesis by using metabolic measurements. Proceedings of the National Academy of Sciences of the United States of America. 2005; 102:5992-5997.