Paclitaxel plays a major role in the treatment of advanced esophageal squamous cell carcinoma. However, there is no biomarker that could be used to predict the clinical response of paclitaxel. This work was conducted to investigate the association of genetic polymorphisms in FBW7 and its substrate genes and the clinical response of paclitaxel. Patients with advanced esophageal squamous cell carcinoma were treated with paclitaxel 175 mg/m2 over 3 hours day 1 and cisplatin 75 mg/m2 day 1, every 3 weeks. The genotypes of 11 FBW7 and its substrate gene polymorphisms were determined by polymerase chain reaction–restriction fragment length polymorphism (PCR-RFLP) method. Statistical analysis revealed that patients with mTOR rs1057079 AG (ORadjusted: 4.59; 95% CI: 1.78-11.86) genotype had significant correlation with the clinical response of paclitaxel when compared with AA genotype after adjustment for sex, age, and chemotherapy cycle. The median progression-free survival (PFS) of patients with advanced ESCC who received paclitaxel plus cisplatin (TP) as first-line treatment is 14.3 months (95% CI: 9.0-19.60 months). The median PFS (mPFS) of AG genotypes and AA genotypes in mTOR rs1057079 were 17.31 months (95% CI: 15.9-18.67 months) and 9.8 months (95% CI: 8.58-11.02 months) (p=0.019), respectively.

Esophageal cancer is one of the most common and fatal malignancies in the world [1]. More than two-thirds of patients diagnosed with esophageal cancer had unresectable disease. Patients with unresectable or metastatic esophageal cancer have a particularly dismal prognosis, with an overall survival (OS) of 3.0-8.0 months [2]. Esophageal squamous cell carcinoma (ESCC) is the predominant histologic type (90%-95%), while the incidence of esophageal adenocarcinoma remains extremely low in China [3]. So far, no standard regimen is recommended for advanced or metastatic ESCC. Taxol, also known as paclitaxel, has been recognized as an anti-microtubule agent that stabilizes microtubule structure within the cells, causing mitotic arrest and apoptosis [4, 5]. Paclitaxel has been used for the treatment of various types of solid cancers, showing response rates in the range of 30-40% when used alone [6] and 43-56.5% when used in combination with cisplatin [7, 8] in ESCC. Notably, the clinical responses are entirely different among patients with advanced ESCC, which implicates that individual genetic variation could be a significant factor for drug sensitivity. It has been reported that single nucleotide polymorphisms (SNPs) have association with radiation and chemotherapy dependent pathways. A recent study [9] reported that FBW0\7-null colon cancer cells were more resistant to taxol-induced cell death than the wild type cells. Similar results were also observed in ovarian cancer cell lines with naturally occurring F-box and WD repeat domain-containing 7 (FBW7) mutations [10]. It has been determined that the specific substrates of FBW7 consist of cyclin E [11,12], c-Myc [13,14], c-Jun [15,16], Notch [16–18], presenilin [19], Mcl-1 [20], sterol regulatory element-binding proteins (SREBP) [21,22], mTOR [23], Kruppel-like factors (KLFs) [24,25], c-Myb [26], and Aurora A [27]. Proteins encoded by different SNPs of these FBW7 substrate genes are frequently overexpressed in a variety of human cancers. Thus, we detected SNPs of FBW7 and its substrate genes of patients with unresectable or metastatic ESCC who received TP as first-line chemotherapy to investigate the association between the efficacy of TP and the SNPs of FBW7 and its substrate genes and to develop a predictive biomarker for identifying patients that would benefit from paclitaxel therapy.

From January 2012 to January 2015, 134 patients with ESCC met these criteria, and were recruited to receive the study treatment in Henan Cancer Hospital. Among them, 123 patients were evaluated for toxicity and efficacy, which includes 86 men (69.9%) and 37 women (30.1%) with a median age of 62 years (range: 35-75 years). All patients had metastatic disease, which included lymph nodes, mediastinum, lung, liver, adrenal grand, bone and soft tissues. In total, 33 patients (26.8%) received esophagectomy; 22 patients (17.9%) received radiotherapy. Baseline characteristics are summarized in Table 1. The median total duration of treatment was 4 cycles (2-6 cycles). Among the 123 patients, CR was not observed, 57 patients achieved PR and 39 patients experienced PD. The objective response rate (ORR) and the disease control rate (DCR) of patients with advanced ESCC treated with TP as first-line chemotherapy are 46.3% and 68.3%, respectively.

The genotype distributions of the 11 selected SNPs of FBW7 and its substrate genes and the efficacy of paclitaxel are shown in Table 2. The results of unconditional logistic regression analysis of the genotypes revealed that the patients with mTOR rs1057079 AG (ORadjusted: 4.59; 95% CI: 1.78-11.86) genotype had significant correlation with the clinical response of paclitaxel when compared with AA genotype after adjustment for sex, age, and chemotherapy cycle. However, no significant correlations were observed between the other 10 genotypes examined and the clinical response of paclitaxel.

Table 2: Genotypes of 11 SNPs of FBW7 and its substrate genes and their association with efficacy of paclitaxel

Table 3: Genotypes of 11 SNPs of FBW7and its substrate genes and their associations with adverse events.

Haplotype analysis of 11 FBW7 and its substrate gene polymorphisms

Table 4: Haplotype analysis of the myb gene in subjects

Table 5: Haplotype analysis of the mTOR gene in subjects

Table 6: Haplotype analysis of the NOTCH1 gene in subjects 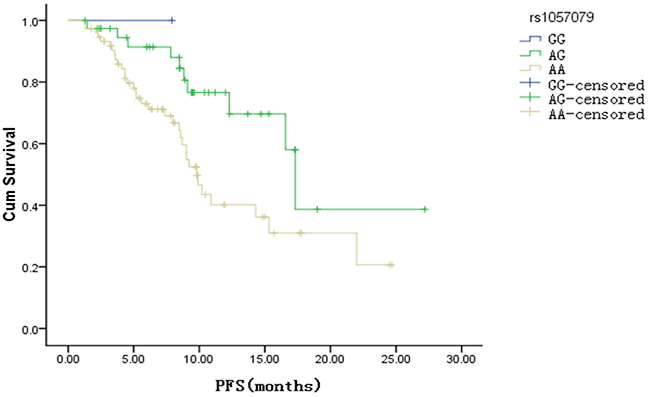 Paclitaxel plays a key role in advanced ESCC first-line chemotherapy. However, its clinical utility is limited by drug resistance, as well as largely varied clinical response. Up to now, there is no biomarker that could be used to predict the clinical efficacy of paclitaxel. Notably, recent studies have demonstrated that FBW7 is involved in the regulation of drug resistance [10, 30]. FBW7, a well-studied SCF ubiquitin ligase, is reported to target various oncogenic proteins for ubiquitination [31]. Study has shown that loss of FBW7 leads to an elevated expression of the c-Jun, c-Myc, and Notch-1 oncoproteins, all of which are capable of promoting cell growth [32]. Tumors with mutant FBW7 were more resistant to paclitaxel compared to FBW7 wild-type parental tumors [10]. To our knowledge, this work is the first study to investigate associations between genetic polymorphisms of FBW7 and its substrate genes and the clinical response of paclitaxel.

The activation of mTOR is known to positively regulate protein translation and cell proliferation. It has been documented that mTOR plays a critical role not only in cancer angiogenesis, but also in cancer progression [33–34]. Two studies have assessed associations between functional SNPs in mTOR gene and risk of ESCC in Chinese populations. They genotyped several mTOR SNPs in ESCC patients and found a significantly altered risk of ESCC associated withmTOR rs1883965 and mTOR rs2295080 [35–36]. An early study identified seven SNPs of PI3K/PTEN/AKT/mTOR pathway in patients with advanced ESCC treated with 5-Fu, cisplatin or paclitaxel, and explored the association between clinical outcome and genetic variations. Only mTOR FRAP1:rs11121704 homozygosity was associated with a poor response to paclitaxel [37]. Gratifyingly, our work unveiled significant association between genetic variants in mTOR and the clinical response of paclitaxel in patients with ESC, although it is too eary for us to conclude that mTOR rs1057079 AG is the biomarker of paclitaxel response since the sample sizes of this study is relatively small.

Currently, we are enrolling patients in a large sample size clinical trial to further verify the association between SNPs of mTOR and the response of paclitaxel. The ultimate goal is to allow for the selection of the optimal therapy that would provide the most benefit and least toxicity for patients with ESCC from paclitaxel treatment.

To conclude, in SNPs of FBW7 and its substrate genes, the mTOR rs1057079 AG genotype could be used to predict the clinical response and to achieve better mPFS of patients with advanced ESCC treated with TP regimen as first-line chemotherapy. Further investigation with a larger number of patients study is needed to confirm the predictive values of genetic polymorphisms in mTOR signaling pathways.

This was a prospective analysis of patients with advanced ESCC who received TP as first line chemotherapy. The study was approved by the Ethics Committee of Zhengzhou University. Written informed consents for chemotherapy were obtained from all patients. All patients agreed to these studies and the preservation of genomic DNA for future investigations. Patients had to be at least 18 years of age at the time of registration and had histologically or cytologically confirmed ESCC, which was surgically unresectable or recurrent. They also had to have an Eastern Cooperative Oncology Group (ECOG) performance status of 0–2, a life expectancy of >12 weeks with sufficient bone marrow, liver, renal and cardiovascular function.

Patients were treated with paclitaxel 175 mg/m2 over 3 hours day 1 and cisplatin 75 mg/m2 day 1, every 3 weeks. Patients receiving paclitaxel were premedicated with 10 mg of oral dexamethasone at 12 and 6 hours before the infusion and with intramuscular injection diphenhydramine and intravenous H2 receptor antagonist within 60 minutes before the infusion of paclitaxel to reduce the risk of hypersensitivity reaction. Cisplatin was administered with hydration and forced diuresis, and patients underwent routine monitoring of electrolytes, serum creatinine, and magnesium. The combination therapy was up to maximum 6 cycles. Treatment was discontinued until the documented disease progression, unacceptable toxicity or patient’s refusal.

Myb, mTOR, NOTCH, c-Myc, SREBF2 and FBW7 genes were identified based on Chinese population data in HapMap database (http://www.hapmap.org). SNPs in Myb, mTOR, NOTCH, c-Myc, SREBF2 and FBW7 were selected by bioinformatics data bank using Haploview software, bioinformatics software packages such as TargetScan Human 6.2 (http://www.targetscan.org/), miRanda (http://microrna.org/) and Patrocles (http://www.patrocles.org/) to offer potential miRNA binding sites within the 3’UTRs of these genes. As a result, totally 11 SNPs in these genes were included for further genotyping with the criteria of a minor allele frequency (MAF) greater than 5%. Polymerase chain reaction restriction fragment length polymorphism (PCR-RFLP) was used to analyze the polymorphisms of mTOR rs1057079, rs17036508, rs2536, rs2295080, NOTCH rs3124591, rs10521, c-Myc, SREBF2 and FBW7 rs7685296. The digestion products were visualized by electrophoresis on 3% agarose gel and the genotypes were inferred from the number of bands observed in the gel.

Response was assessed according to the Response Evaluation Criteria in Solid Tumors (RECIST) version 1.0 [28] as complete response (CR), partial response (PR), stable disease (SD) or progressive disease (PD) in patients with measurable lesions. Toxicities were graded according to the National Cancer Institute’s Common Terminology Criteria for Adverse Events (CTCAE) version 4.0 [29]. Progression-free survival (PFS) was measured from the initiation of TP to the occurrence of progression, or death without evidence of progression. Follow-up evaluations were performed after every 3 months for 3 years by endoscopy and CT scan. The last follow-up was performed in June 2015.

The SPSS 21.0 statistical software package was used for statistical analyses. Student’s t-test for continuous variables and Chi-squared (c2) test for categorical variables were used to compare the differences in the distributions of major demographic variable, as well as the genotypes of selected SNPs between the ESCC patients. Unconditional logistic regression was applied to estimate the associations between genetic polymorphisms and the risk of ESCC by computing the odds ratios (ORs) and its 95% confidence intervals (CIs). Online SHEsis (http://analysis.bio-x.cn/myAnalysis.php) was applied for haplotype prediction and analysis. The Kaplan-Meier method was used to estimate the relationship between PFS and clinical response of paclitaxel; the log-rank test of the null hypothesis of a common survival curve was used to compare survival curves. A P-value of less than 0.05 was considered to be statistically significant and all the inspections were two-side test.

This work was supported by National Natural Science Foundation of China (grant number 81201954). We thank Dr. Peng Liu for proofreading of the manuscript.

2. Vestermark LW, Sørensen P, Pfeiffer P. Chemotherapy to patients with metastatic carcinoma of the esophagus and gastro-esophageal junction. A survey of a Cochrane review. Ugeskr Laeger. 2008; 170: 633–636.