Human papillomaviruses (HPV) are small double-stranded DNA viruses that belong to the family of papillomavirus [1]. The ~8000 bp DNA genome is organized by the upstream regulatory region contains transcription regulatory elements and the origin of DNA replication; early region encodes 8 early viral proteins E1–E8; and late region encodes the major and minor capsid proteins L1 and L2 [2–4]. There are as many as 170 HPV genotypes have been identified [5]. HPV are mucosotropic and can be sexually transmitted [6]. Unique HPV genotypes were found to be disease specific, Persistent infections by the high-risk HPV genotypes leads to cancers [7]. As high as 99% of cervical cancers are believed caused by high-risk HPV, genotype 16 and 18 are responsible for about 70% of the cervical cancer cases [8]. Low-risk HPV genotypes 6 and 11 infections account for 90% of genital warts and essentially all laryngeal papillomas [9].

Genital warts are evident skin or mucosal growths in the anogenital area display as flat, papular, or pedunculated growths on the genital mucosa [10]. Genital warts occur commonly around the vaginal introitus, under the foreskin of the uncircumcised penis, and on the shaft of the circumcised penis [10]. Genital warts are one of the most common types of sexually transmitted infections highly occur in homosexual men, sex workers and human immunodeficiency virus (HIV) positive homosexual men [11]. Although genital warts are benign neoplasms, they unleash considerable harassment to patients [10]. 90% genital warts are believed to be caused by low-risk HPV genotypes 6 or 11 infection [12]. High-risk HPV genotypes 16, 18, 31, 33, and 35 are also occasionally found in genital warts and can be associated with high-grade squamous intraepithelial lesions particularly in persons who have HIV infection [12].

Treatments on genital warts are mainly divided into medications and surgery, medications include imiquimod, podophyllin, podofilox and trichloroacetic acid, surgery include freezing with liquid nitrogen, electrocautery, surgical excision and laser treatments [13, 14]. Although the short-term effect of above treatments is very good, no approach could prevent recurrence of genital warts [13]. Thus, effective prevention against HPV transmission and infection is essential. Fortunately, an effective vaccine was licensed in the year of 2006 [15].The main components of the vaccines are virus-like particles derived from the L1 proteins of HPV 6, 11, 16, and/or 18 [15]. However, effective vaccination is largely dependent on the baseline information on HPV prevalence, genotype distribution and relative pre-existing immunity in a certain population [16].

HPV genotype distribution differs across world regions, even HPV genotypes 16, 18, 31, 52, and 58 are consistently found worldwide, the distribution of a certain HPV genotype still showed huge regional differences [17]. Therefore, to learn the HPV genotype distribution characteristics and providing matched vaccine is the prerequisite to ensure the efficiency of vaccination. On the other hands, current HPV study is mainly focused on cervical cancer relative high-risk HPV, data of HPV identified from males is relatively small. HPV infected men may act as reservoirs of HPV, resulting in continued transmission of HPV to women. In this report, patients with genital warts visited our hospital were recruited, the distribution characteristic of 15 high-risk HPV strains and 6 low-risk HPV strains in these patients were evaluated. 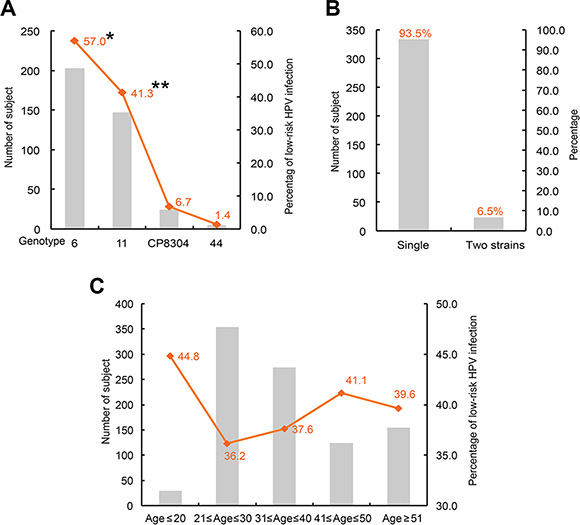 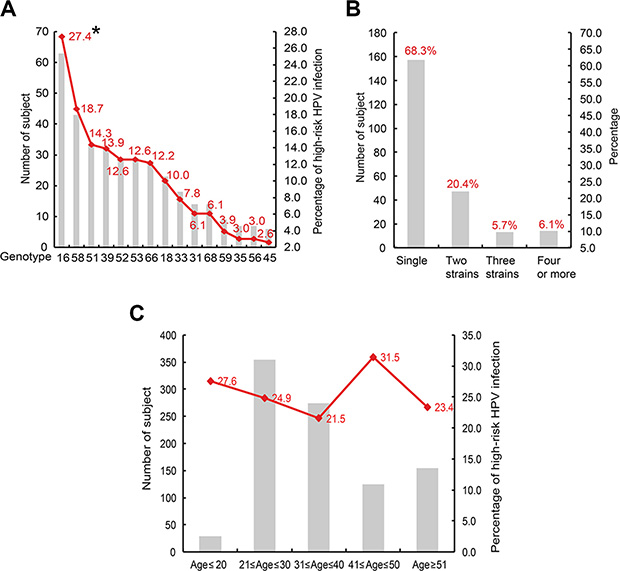 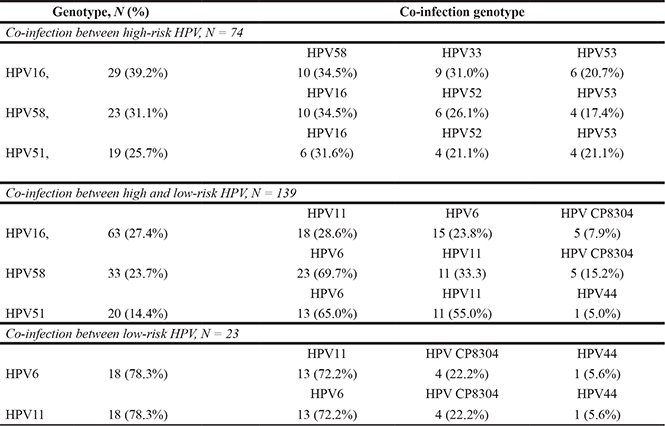 Data regarding HPV infection in men is relatively rare and not comprehensive, to compare HPV positivity in this and other studies, we summarized the representative published data. The data include three cross-country studies and one from Brazil [18–21]. As showed in the Table 3, HPV infection profile in men with genital warts varied among reports, even within the three cross-country studies, their data also varied greatly. HPV infection is highly prevalent in Brazil. HPV genotype distribution displayed regional difference.

Table 3: Comparison of HPV positivity in this and other studies

The data was presented as percentage. /data not avaliable.

HPV, as one of the seven notorious carcinogenic viruses, is being studied worldwide [22]. Recently, significant progress in the control and prevention on HPV infection had made, the success of prophylactic HPV vaccines is the best case in point [23]. However, the genotypes of HPV are at least as many as 170 and the distribution of these genotypes differed regionally [5, 17], vaccines can not ensure to protect worldwide people sufficiently regardless of octavalent or bivalent vaccines. Thus, surveillance on HPV genotype distribution possesses the same importance as vaccine development, regimen modification and dosage improvement. Low-risk HPV could cause genital warts and laryngeal papillomas, so, the study on low-risk HPV is easy to be overlooked. In fact, burden of low-risk HPV is also huge, HPV is the most common genital infection in the US, and the lifetime risk of at least one HPV infection in women is 75% [24, 25]. Further more, HPV infected men may act as reservoirs of HPV, resulting in continued transmission of HPV to women. Thus, surveillance on HPV infection in males is also important.

The prevalence of both low-risk HPV and high-risk HPV displayed differences in age groups, this phenomenon was also observed in the HPV infection in women [29, 30]. Although we are not sure what cause these differences, our data showed that HPV infection in men with genital warts was throughout the life span.

Based on our data, the high-risk HPV are also highly prevalent in the population with genital warts, there are two important information of high-risk HPV infection in our male patients, firstly, since HPV infection is a sexually transmitted disease, efficient HPV control and prevention in women could not ignore that high HPV infections in male; secondly, our data showed that HPV 16, 58, 51, 39 and 52 are the top five dominant genotypes, which differed from the data from a meta-analysis with a large-scale women population, in that report, HPV 16, 18, 31, 52, and 58 are consistently found among the 10 most common types in 5 continents [17], this difference might be explained by gender difference, but on the other hand, we could not eliminate the real difference exists between our population and populations pooled in that meta-analysis. In conclusion, any impact of high-risk HPV on the pathophysiological process of genital warts should be valued in further clinical trails.

This study was conducted in accordance with the World Medical Association Declaration of Helsinki (http://www.who.int/bulletin/archives/79(4)373.pdf). The Review Board of the Ethics Committee of Medical Research at Shanghai Dermatology Hospital (1278 Baode Road, Jingan District, Shanghai) approved the study protocols. Written informed consents were obtained from all patients according to the guidelines of the Chinese National Ethics Regulation Committee. All patients were informed of their rights to withdraw consent personally or via kin, caretakers, or guardians.

To learn the characteristics of HPV infection in males with genital warts of Shanghai, a cross-sectional study was adopted. Adult male patients with genital warts were recruited sequentially from January 2014 to May 2015 at our Hospital. Diagnosis of genital warts is made by visual inspection. When lesions are atypical, e.g., pigmented, indurated, affixed to underlying tissue, bleeding, or ulcerated lesions, the diagnosis was confirmed by biopsy. The exclusion criteria include patients with uncertain diagnosis and patients undergoing standard therapy. Finally, 935 out of 1114 patients were included in this study, the median age and quartile range were 42 and 31 to 56.

Biopsies of the outer genital area (scrotum or penis) were performed under local anesthetic. Biopsy samples or surgical specimens were subjected to clinical laboratory for pathological examination. Simultaneously, a part of the biopsy sample of each patient was used for HPV DNA extraction after grinding. DNA extractions were performed using QIAmp Mini Kit (Qiagen, Shanghai, China), a water blank was processed through all steps of extraction to serve as a contamination control. The extract was stored at –20OC before HPV detection. HPV DNA testing and HPV genotyping was performed using commercial detection kit purchased from Hybribio (Hongkong, China). The kit uses polymerase chain reaction (PCR) with biotinylated PGMY09/11 primer sets that target HPV L1 consensus region, beta-globin was adopted as an internal control for sample amplification. All PCR products were hybridized to the typing strip that included probes for 15 high-risk HPV strains (HPV16, 18, 31, 33, 35, 39, 45, 51, 52, 53, 56, 58, 59, 66 and 68) and 6 low-risk HPV strains (HPV6, 11, 42, 43, 44 and CP8304). All detection procedures were guided by the manufacturers protocol. Detected HPV strains are defined by genotype not by sub-genotype or quasispecies. The definitions of high-risk HPV and low-risk HPV genotypes were basically based on the Human Papillomavirus Vaccination, Recommendations of the Advisory Committee on Immunization Practices (ACIP) [31]. According to the etiology of cervical cancer, high-risk HPV genotypes have the potential to act as carcinogens; low-risk HPV genotypes can cause benign or low-grade cervical cell changes, genital warts, and recurrent respiratory papillomatosis [31].

Statistical analysis was performed using SPSS version 13.0. Continuous variables were presented as means ± standard deviation (SD) and categorical data were presented as numbers (percentage). Differences between groups were examined by using t-tests, one-way ANOVA, χ2 or Fisher Exact Probability Test according to the characteristics of data distribution. The significance level α was set at 0.05.