Breast cancer is the most common cancer in women worldwide and is the second leading cause of death in women in many wealthy countries. Triple-negative breast cancer (TNBC), which lacks estrogen receptor (ER) and progesterone receptor (PR) expression as well as human epidermal growth factor receptor 2 (HER2) amplification, is one of the most difficult breast cancers to treat because there is no targeted treatment [1, 2]. Wnt/β-catenin signaling plays an important role in embryonic development and stem cell maintenance, and its aberration activation can lead tumor formation [3–5]. Activation of Wnt/β-catenin signaling, as defined by β-catenin nuclear expression and overexpression of the Wnt/β-catenin target cyclin D1, is associated with a poorer prognosis in breast cancer patients [6]. Recent studies further demonstrated that Wnt/β-catenin signaling activation was preferentially found in TNBC [7, 8], such that Wnt receptor frizzled-7 (FZD7) and Wnt co-receptor LRP6 were found to be up regulated in TNBC [9–11]. Therefore, LRP6 and Fzd7 could serve as novel therapeutic targets for the treatment of TNBC [12].

With no targeted treatments currently available, conventional cytotoxic chemotherapy followed by adjuvant radiation therapy is the standard of care for patients with TNBC. Studies have demonstrated that patients with TNBC who received standard adjuvant chemotherapy plus radiation therapy had decreased risk of locoregional recurrence and increased overall survival in comparison to those that received chemotherapy alone [13–15]. However, many breast cancer patients fail to respond to conventional radiotherapy/chemotherapy, leading to tumor recurrence [1, 2]. Ionizing radiation (IR) treatment can activate multiple signaling pathways in tumor cells, which are associated with radioresistance in many types of cancer [16]. Studies have demonstrated that IR can selectively enrich for breast cancer stem cells with activated Wnt/β-catenin signaling, which mediates radioresistance of breast cancer cells [17–19]. Therefore, Wnt inhibitors could have a therapeutic potential to overcome radioresistance of TNBC. 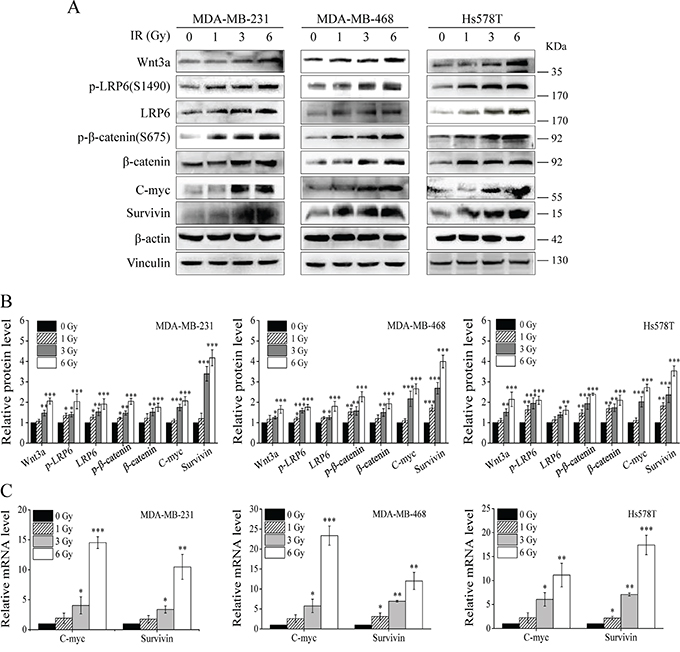 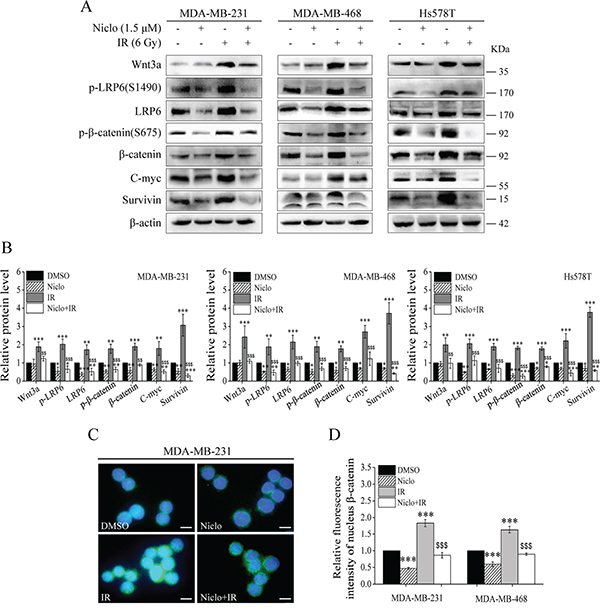 Given that niclosamide can inhibit IR-induced Wnt/β-catenin signaling in TNBC cells, we then examined whether niclosamide sensitizes TNBC cells to IR. Initially, we found that the cell viability IC50 values of niclosamide on MDA-MB-231 and Hs578T cells after 24 h treatment were 13.63±0.43 and 25.32±0.54 μM, respectively. Therefore, we tested niclosamide at 1.0, 1.2 and 1.5 μM for 24 h, which were not cytotoxic (less than 20% of the IC50 values) and had no effects on the plating efficiency (PE) of TNBC cells. It was found that niclosamide at 1.5 μM significantly enhanced IR-induced apoptosis in MDA-MB-231 and MDA-MB-468 cells (Figure 3A and 3B). Importantly, pretreatment of niclosamide at 1.0, 1.2 or 1.5 μM for 24 h significantly sensitized MDA-MB-231, MDA-MB-468 and Hs578T cells to IR with the sensitizer enhancement ratio (SER) between 1.20 to 1.63 (Figure 3C). 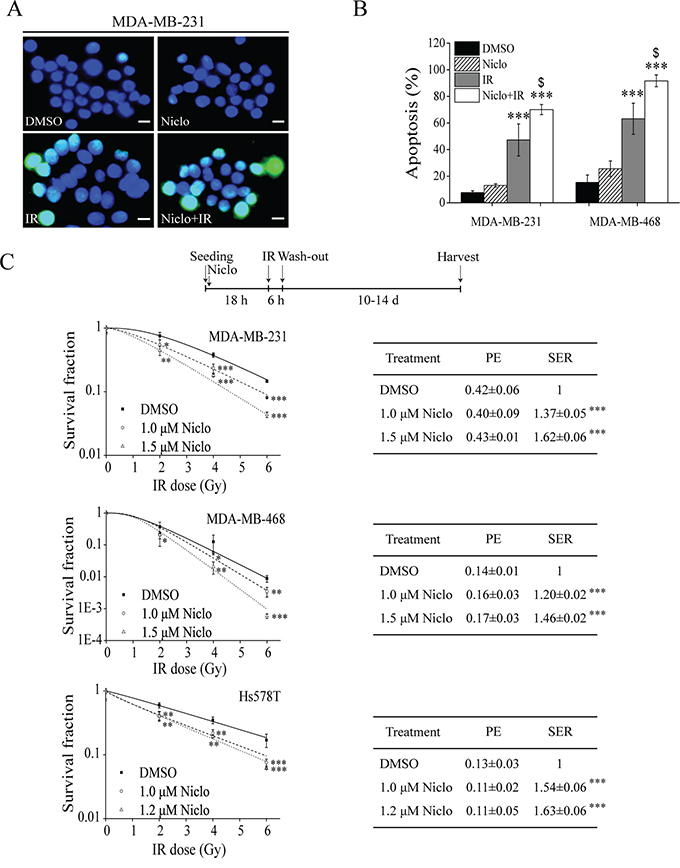 β-catenin is a central component in the Wnt/β-catenin signaling pathway. The binding of Wnt protein to its receptor Fzd and co-receptor LRP6 results in stabilization of cytosolic β-catenin, which then translocates into the nucleus where it interacts with T-cell factor/lymphoid enhancing factor (TCF/LEF) to induce the expression of downstream target genes [3–5]. To confirm that niclosamide-induced radiosensitization is associated with its ability to inhibit Wnt/β-catenin signaling, we tested whether β-catenin modulates the radiosensitivity of TNBC cells. We found that knockdown of β-catenin by shRNA significantly sensitized MDA-MB-231 cells to IR (Figure 4A and 4B), whereas overexpression of β-catenin reduced radiosensitivity of MDA-MB-231 cells (Figure 4C and 4D). Notably, niclosamide was able to overcome β-catenin overexpression-induced radioresistance of MDA-MB-231 cells (Figure 4D). Together, these results suggest that the inhibition of Wnt/β-catenin signaling by niclosamide contributes its radiosensitizing effects in TNBC cells. 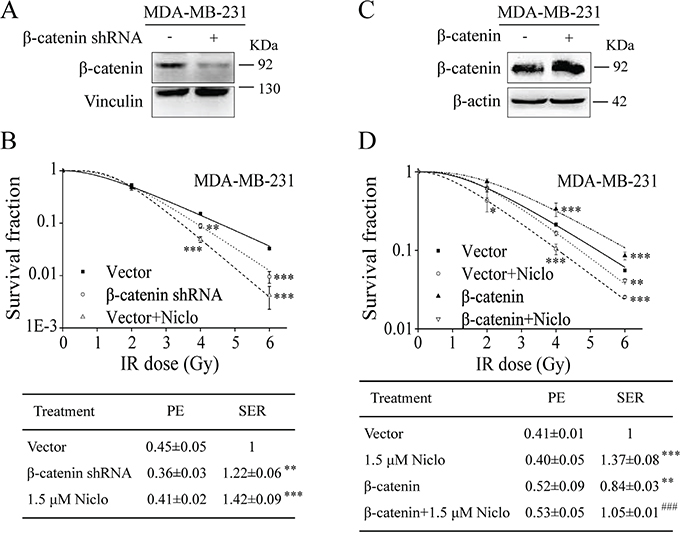 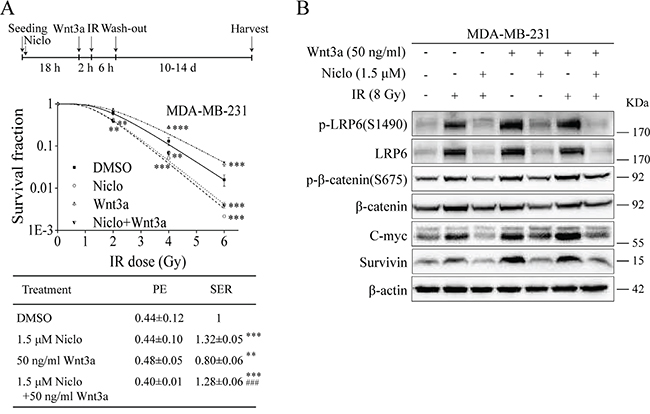 Effect of niclosamide and IR on established MDA-MB-231 tumors 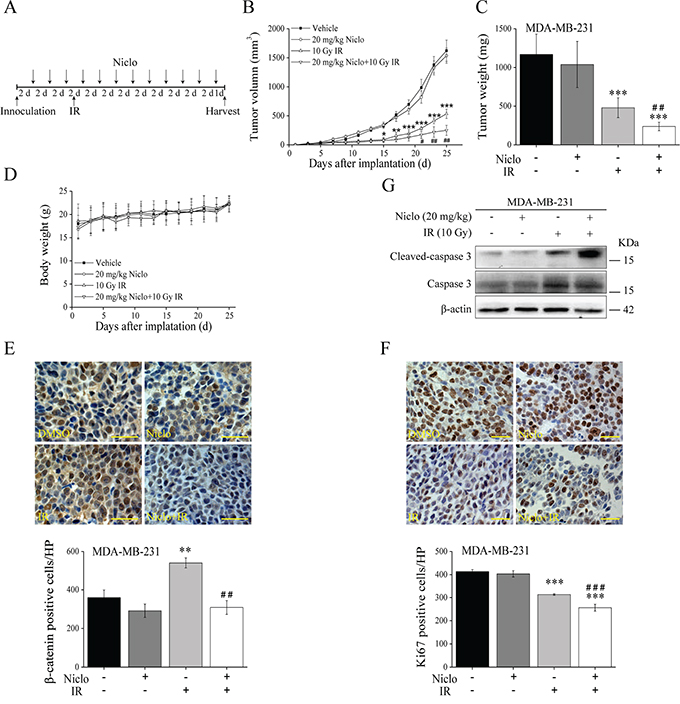 We noted that MDA-MB-468 cells were more radiosensitive than MDA-MB-231 and Hs578T cells (Figure 3C), which is consistent with the findings by other groups [36, 37]. It has been reported that the status of the retinoblastoma tumor suppressor (pRB) in TNBC cells dictates response to radiation treatment, and that pRB-negative TNBC cell lines such as MDA-MB-468 and BT549 are highly sensitive to IR compared to pRB-positive TNBC cell lines such as MDA-MB-231 and Hs578T [37]. The E2F1 transcription factor is a key downstream target of pRB, and a potent and specific inhibitor of Wnt/β-catenin signaling in colorectal cancer cells [38]. Wnt/β-catenin signaling activation is preferentially found in TNBC [7, 8, 12]. Therefore, further studies are necessary to determine whether E2F1 plays a role in Wnt/β-catenin signaling and radiosensitivity in TNBC cells.

TNBC cells were plated into 60 mm culture dishes at various cell densities (2×102-2×104 cells/dish) and treated with niclosamide for 18 h. The cells were then exposed to IR at doses of 0, 2, 4 and 6 Gy γ-ray or X-ray. The cell culture media were changed at 6 h post-irradiation. The cells were further cultured for an additional 10~14 days, and colonies were fixed and stained with Giemsa. The colony is defined to consist of at least 50 cells. The plating efficiency (PE) was calculated as the number of colonies divided by the number of cells seeded, and the surviving fraction (SF) was determined by dividing the PE of the treated cells by the PE of the controls. The cell-survival curve was prepared with the multi-target single-hit model using Origin 9.2 software, and the mean lethal dose (D0) was calculated. The sensitizer enhancement ratio (SER) was determined as the D0 value of irradiated group divided by the D0 value of irradiation plus niclosamide-treated group [48].

TNBC cells growing on coverslips were treated with niclosamide (1.5 μM) for 18 h. The cells were then exposed to 6 Gy γ-ray IR. After 6 h incubation, the cells were fixed in 4% paraformaldehyde, permeabilized with 0.5% Triton X-100, blocked with 10% (v:v) FBS in phosphate-buffered saline (PBS), labeled with rabbit monoclonal β-catenin (6B3) antibody (1:200, Cell Signaling Technology), and detected with Alexa Fluor 488 donkey anti-rabbit IgG (1:500, Molecular Probes/ThermoFisher Scientific, Grand Island, NY). The nuclei were counter stained with DAPI (Santa Cruz Biotechnology Inc., Santa Cruz, CA), and the images were examined under an Olympus BX51 fluorescent microscope. The mean fluorescence intensity of nuclear β-catenin staining was calculated out of a total number of 200 cells per sample, and was normalized to that of a control sample for the calculation of the relative fluorescence intensity.

TNBC cells growing on coverslips were treated with niclosamide (1.5 μM) for 18 h. The cells were then exposed to 6 Gy γ-ray or 8 Gy X-ray IR. After 48 h incubation, the cells were subjected to terminal deoxynucleotidyl transferase-mediated dUTP biotin nick end labeling (TUNEL) staining using a TUNEL Apoptosis Detection Kit (Vazyme Biotech, Nanjing, Jiangsu Province, China) for in situ detection of apoptosis according to the manufacturer’s instructions. The cells were counter-stained with mounting medium containing DAPI (Santa Cruz Biotechnology), and the FITC-labeled TUNEL-positive cells were imaged using an Olympus BX51 fluorescent microscope. The percentage of TUNEL-positive cells was calculated out of a total number of 100 cells per sample that were detected in different and randomly chosen microscopic fields.

Female athymic nude mice at 4-5 weeks of age were purchase from Shanghai Silaike Laboratory Animal Co. Ltd. (Shanghai, China) and housed under specific-pathogen-free condition. The nude mice received autoclaved diet and water ad libitum. MDA-MB-231 cells (5×106 cells) were suspended in 0.1 ml of PBS, and injected subcutaneously into the right rear thighs of the nude mice. The day of tumor implantation was designated as day 0, and the nude mice were randomly assigned into four groups (5 nude mice per group). Niclosamide at a dosage of 20 mg/kg/dose was given every other day by intraperitoneal injection. A single 10 Gy γ-ray local irradiation of tumor was given at day 7. Tumor dimensions and body weights were measured every other day. Tumor volume was determined by caliper measurements (mm) and using the formula for an ellipsoid sphere: L × W2/2 (mm3), where L and W refer to the larger and smaller perpendicular measurements, respectively. Nude mice were sacrificed by decapitation and tumors were immediately removed after death. All animal protocols were reviewed and approved by the Animal Research Ethics Committee of School of Pharmacy of Fudan University prior to experimentation.

All data are expressed as the mean ± standard deviation. Statistical analyses of the data were performed using SPSS 18.0 software (SPSS Inc., Chicago, IL). Student’s t-test was applied to analyze the difference between two means. P value of less than 0.05 was considered to indicate statistical significance.

This work was supported by the National Nature Science Foundation of China (31370839).