Nasopharyngeal carcinoma (NPC) is a distinct type of head and neck cancer owing to its extremely unbalanced endemic distribution, pathology and clinical attributes [1]. It has a high incidence rate, ranging from 20 to 30 cases per 100 000 people in southern China and the surrounding areas [1, 2]. Radiotherapy is the standard treatment modality for early NPC, and combined radiotherapy and chemotherapy is applied for loco-regional advanced disease [3, 4].

Given the current availability of conformal intensity-modulated radiotherapy, which accurately delivers high doses to the tumor target volume and spare normal tissue, distant metastasis has become the major cause of failure of treatment for NPC. More than 20% local-advanced NPC patients will develop distant metastasis after definitive chemoradiotherapy [4–6]. The tumor, lymph node and metastases status display prognostic relevance in NPC. However, within the same TNM stage there is heterogeneity in the duration of overall survival and risk of distant metastasis among patients with NPC [7]. Therefore, there is much interest in developing additional prognostic factors to permit more accurate patient stratification to evaluate individual prognosis. Such factors will improve clinical decision-making, and may help guide the provision of individualized treatment [8].

Immune cells, particularly T and B lymphocytes, play an important role in the immunological surveillance and can help in the elimination of tumor cells [9–11]. Previous studies have revealed that higher levels of particular lymphocyte subpopulations in the circulating blood were associated with tumor development and poor prognosis in NPC patients [10, 12]. However, these studies were only performed in a small number of patients (n=356 and n=94, respectively) [10, 12]. Despite these associations, the influence of lymphocyte subpopulations on metastatic prediction in patients with NPC remains unclear.

The relationship between lymphocyte subpopulations and NPC prognosis merits further exploration. In this study, we aimed to examine the correlation between lymphocyte subset distribution and clinical variables in order to design a convenient and effective prognostic model predicting distant metastasis in NPC patients. 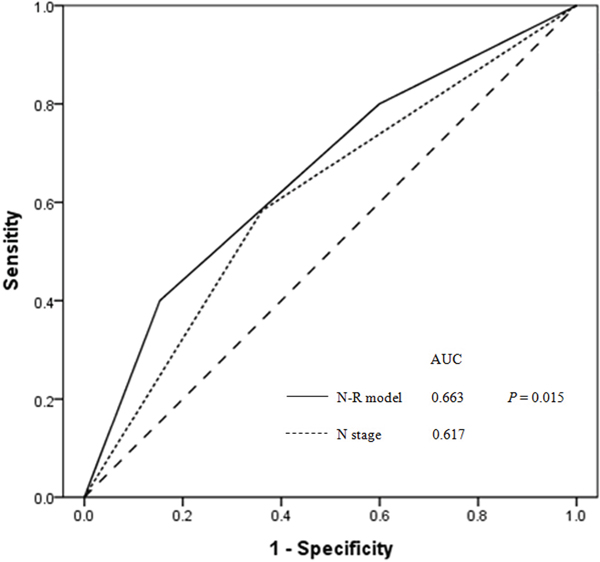 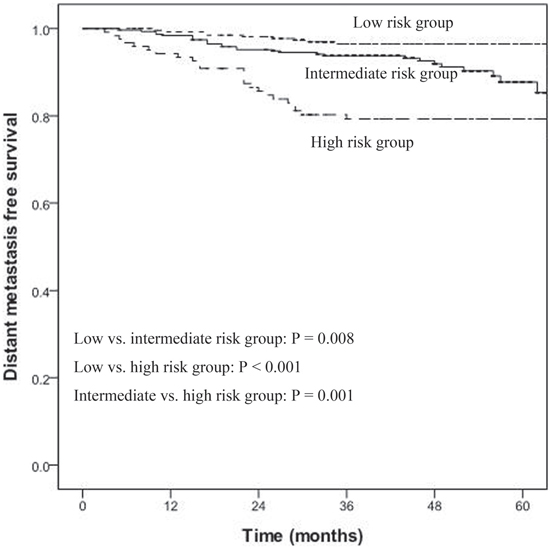 Previous reports have shown that the ratio of CD4/CD8 T cells reflects the immune system status as a surrogate marker of immunosenescence, and may independently predict all-cause mortality [12, 16]. Indeed, Shah et al. reported that the decreased CD4/CD8 ratio was significantly associated with the poorer prognosis of patients with cervical carcinoma [17]. In this study, we found a lower CD4/CD8 ratio is associated with poorer DMFS in patients with NPC.

The mechanisms by which lower CD4/CD8 ratio negatively influences DMFS in NPC patients may be explained by numerous confounding factors. Firstly, previous studies reported that the CD4/CD8 ratio was significantly lower in patients with higher tumor load and plasma concentration of Epstein-Barr virus DNA pre-treatment, indicating a higher risk of distant metastasis [12, 18]. Secondly, as CD4+ T cells play an anti-tumor role by enhancing cellular immune responses [19, 20], insufficient generation of CD4+ T cells could cause an inability of the host to reject the tumor [17]. Indeed, a decrease of CD4+ T cells has been associated with poor prognosis in advanced cancer [21, 22]. Similarly, the results from our study indicate that the CD4/CD8 ratio is an effective predictor of distant metastasis in NPC patients.

Previous studies have shown that the clinical outcome of NPC patients with the same TNM stage can vary widely, implying that the TNM staging system is suboptimal for predicting prognosis and metastasis [23]. As it is important to select patients for appropriate, individualized treatment by identifying patients at high-risk of distant metastasis, a better prognostic model is required. In this study, a simple and easily reproducible prognostic model (N-R model) was designed to predict the distant metastasis in NPC patients. This model was developed based on the N stage and CD4/CD8 ratio, both of which were significantly associated with distant metastasis in the multivariate analysis.

According to the N-R model, NPC patients were stratified depending on their N classification and CD4/CD8 ratio into three risk groups for distant metastasis: low-risk, intermediate-risk and high-risk groups. Based on ROC curves, we found that predicting metastasis in NPC patients could be improved by combining the N staging system with CD4/CD8 ratio. The 5-year DMFS rates of the low-risk, intermediate-risk and high-risk groups were 95.4%, 85.3% and 79.3%, respectively (P < 0.001).

There were several limitations in the current study. The nature of a retrospective analysis and that it was a single-institution experience inevitably brought selection bias and bias at the model-building stage. In addition, the validation set for the prognostic model were not created. A larger, prospective study that collaborates with other centers will be carried out to confirm the generalizability of this prognostic model.

In conclusion, our newly developed N-R model, that combines clinical N stage with CD4/CD8 ratio, may be better for predicting distant metastasis in NPC patients than using the TNM staging system alone. Such an improved prognostic ability would allow NPC patients with high risk of distant metastasis to receive more intensive treatment protocols, such as adjuvant chemotherapy or induced therapy.

Between January 2007 and December 2012, 719 consecutive patients with newly diagnosed, non-metastatic and histologically proven NPC were treated with intensity-modulated radiation therapy (IMRT) in the Zhejiang Provincial Cancer Hospital. This study was approved by the institutional ethical review board of Zhejiang Provincial Cancer Hospital. Informed consent for the collection of medical information was obtained at each patient’s first visit.

The pre-treatment work-up included complete history collection, physical examinations, hematology and biochemistry profiles, magnetic resonance imaging (MRI) of the nasopharynx and neck, chest radiography, a bone scan and an abdominal sonography. All patients were restaged according to the 7th edition of the American Joint Commission on Cancer (AJCC) staging system [13]. The stage distribution was as follows: stage I, 14/719 (1.9%); stage II, 98/719 (13.6%); stage III, 381/719 (53.1%); stage IVa-b, 226/719 (31.4%).

All patients were immobilized in the supine position with a head, neck, and shoulder thermoplastic mask. We obtained two sets of images, i.e. with and without contrast, from the CT simulator for treatment planning. CT was performed after administering intravenous contrast medium, and we obtained 5 mm slices from the head to 1 cm below the sternoclavicular joint. The target volumes were delineated according to the International Commission on Radiation Units and Measurements reports 50 and 62. The clinical target volumes (CTV) were individually delineated based on the tumor invasion pattern as described previously [14]. The contoured images were transferred to a Pinnacle version 7.6 inverse IMRT planning system (Philips Medical Systems, Bothell, WA, USA). The prescribed radiation dose (i.e. the minimum dose received by the 95% of the planning target volume) was a total dose of 69-69.9 Gy in 30-33 fractions to the planning target volume (PTV) of the primary gross tumor volume (GTV), 67.5–69.9 Gy to the nodal GTV PTV, 60 Gy to the CTV-1 PTV (i.e. high-risk regions), and 54 Gy to the CTV-2 PTV (i.e. low-risk regions) and CTV-N (i.e. neck nodal regions). All patients were treated with one fraction daily over five days per week. All targets were treated simultaneously using the simultaneous integrated boost technique.

The analysis of circulating lymphocyte subpopulations was performed on whole blood samples collected into heparinized tubes before the initiation of treatment. Heparinized blood (100 μL) was mixed with 20 μL of each of the following fluorescent mouse anti-human monoclonal antibodies according to the reagent instructions: CD3, CD4, CD8, CD19, CD25, CD44 and CD56 (Becton Dickinson, San Jose, CA). The mixtures were incubated for 30 minutes in the dark room, washed with phosphate buffered saline (PBS) (3 mL), and centrifuged at 1500 rpm for 5 minutes. The supernatant was discarded, and the pellet was resuspended with PBS (1 mL) for flow cytometric analysis. The percentage of fluorescent-positive cells was calculated with flow cytometry (Becton Dickinson). The experiments were repeated three times and the mean value was calculated for statistical analysis [10].

Patients were regularly followed up after treatment every 3 months during the first 3 years, and every 6 months thereafter until death or their last follow-up appointment. The time of the final follow-up was December 2014, and the median follow-up duration was 48 months (ranging from 3 to 89 months). Physical examination and nasopharyngoscopy was performed routinely on each visit. Nasopharyngeal and neck MRI, chest X-ray, bone scan and abdominal sonogram were performed within three months after treatment or when clinical indications dictated.

This work was supported by grants from the Natural Science Foundation of China (No. 81372437).