Lung cancer remains the most frequent incident cancer and the premier cause of cancer-related mortality for both men and women in China [1]. The most commonly diagnosed lung cancers are non-small cell lung cancer (NSCLC), which accounts for up to 85%. There are three histological subtypes of NSCLC, adenocarcinoma, squamous cell carcinoma, and large cell carcinoma [2]. NSCLC prognosis is deeply hinge on early stage diagnosis, more than 50% of patients with early stage diseases survive more than 5 years, compared with 5 year survival rate of less than 5% in patients with advanced stage diseases [3]. These lead many physicians and investigators to hunt for early screening strategies, including novel biomarkers and diagnostic tools to detect early stage NSCLC. However, those examination methods including imaging with chest X-rays, low dose computed tomography scans [4], sputum exfoliative cytological analysis, and a series of serum biomarker, such as CEA, NSE, CYFRA21-1, and SCC [5], have little to do with displaying the mortality of lung cancer. Therefore, investigation of a novel biomarker is clinically urgently needed.

Haptoglobin, an acute phase reactant protein, mainly produced by liver but also by other tissues, such as lung, spleen, kidney, skin and adipose tissue [6], which is constituted by an alpha chain and a beta chain, displaying in humans as three major phenotypes, Hp1-1, Hp2-2 and Hp2-1 [7]. It mainly functioned in the area of anti-inflammatory and anti-oxidant, but also in the field of autoimmune diseases, neurodegenerative diseases, and tumor angiogenesis [8, 9]. Elevated levels of serum haptoglobin were found in patients with inflammatory diseases [10] and a variety of cancers, including lung cancer [11–14]. We supposed that the serum levels of haptoglobin might be a good biomarker for progression and prognosis of NSCLC patients. However, to date, there is no report about the association between serum haptoglobin levels and prognosis of NSCLC. 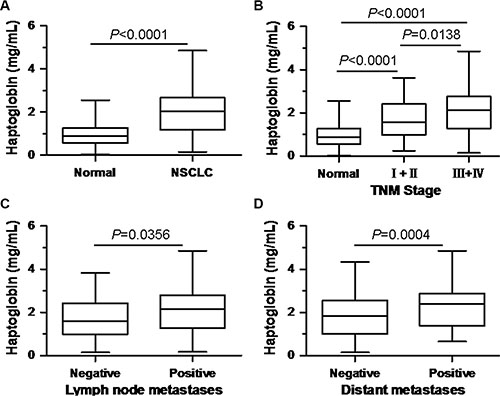 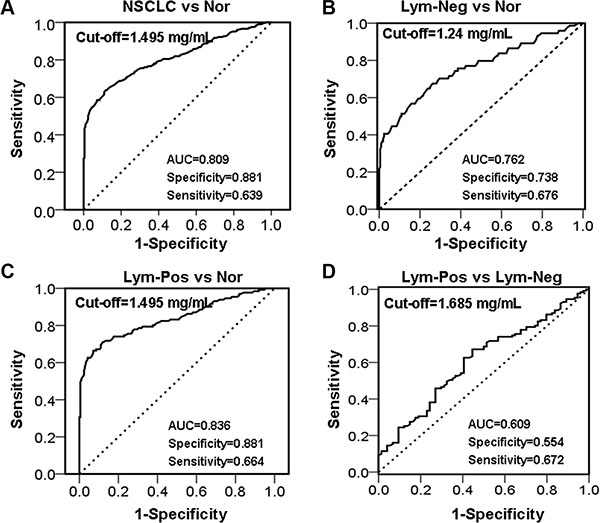 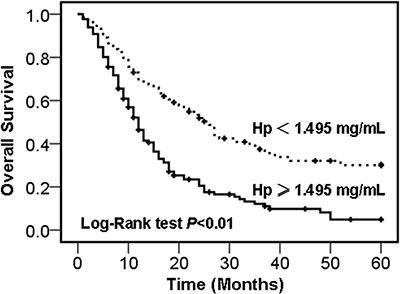 Blood sample is convenient to collection, and the test data can be stable replication during long periods, serological biomarkers have been regarged as valuable indicator in the diagnosis, treatment and prognosis of lung cancer [15]. Accumulating studies in serum sample displayed the pros and cons of usual serum biomarker for NSCLC diagnosis [16–18], while others emphasized their function in disease progression, therapy and prognosis evaluation [19]. Yang D et al. measured cytokine contrations by using multiplexed cytokine immunoassays, and found an NSCLC-specific profile of inflammatory mediators, including CXCL10, CXCL11 and CCL20 which would be useful for predicting of therapeutic effects and overall survival [20]. Wikoff WR et al. applied a liquid chromatography/mass spectrometry hydrophilic interaction method to analyze a wide rage of serum metabolites, and identified diacetylspermine was a novel serum metabolite with obvious performance in prediagnostic NSCLC [21]. From the clinical investigator’s standpoint, CA125, CEA, CYFRA21-1 and SCC still play as the leading serum biomarker in NSCLC and are mainly applied in disease monitoring[17]. Therefore, novel biomarker for diagnosis and prognosis evaluation would assist the doctors to improve the clinical management of NSCLC. The present study was performed to evaluate serum haptoglobin value of diagnostic and prognostic in NSCLC.

In NSCLC, Hoagland LF et al. found serum haptoglobin levels significantly elevated in NSCLC patients compared with normal controls, and strongly associated with NSCLC stage [11]. However, this study’s subject quantity is not good enough, and no prognostic data. Park J et al. utilized stable isotope dilution-multiple reaction monitoring mass spectrometry to investigated the circulating concentration of haptoglobin subunits in 210 NSCLC patients, found serum levels of haptoglobin alpha and beta chains were obviously elevated in NSCLC compared with controls, could be a biomarker for the diagnosis of NSCLC, but lacking of prognostic data [6]. In this study, we detected serum haptoglobin levels in 205 NSCLC patients by commercially available human haptoglobin assay kit, using a fully automated analytical platform, Beckman Coulter AU5800. Our sample’s size is adequate, and detect method is very convenient and suitable for the most of primary hospital, which is very important for the vast rural of China and other developing and undeveloped countries.

We verified whether serum haptoglobin levels associated with NSCLC lymph node metastasis or not. The area under the ROCs for the detection of NSCLC lymph node metastasis by serum haptoglobin was 0.609 (sensitivity of 0.672, specificity of 0.554), suggested that haptoglobin might be associated with the progression and poor prognosis of NSCLC. More interesting, another acute-phase protein, C-reactive protein also was found elevated in NSCLC patients, and associated with disease progression and poor prognosis [22, 23]. The precise molecular mechanism for the function of haptoglobin in cancer pathogenesis is still unclear, by now. We speculated that serum haptoglobin levels might be reflected seriousness of infection, which could be caused by tumor necrosis or metastasis. This might suggested that haptoglobin is a potential prognostic biomarker, even the molecular therapeutic target for NSCLC.

However, there were still several limitations in this study. First, this is a single-center study, a large multicenter studies will be needed to adjust the possible biases, to more precisely evaluate the value of serum haptoglobin as a biomarker of NSCLC. Second, the ratio of clinical stage was not ideal. Most of cases were in the advanced stages (III + IV, 70.2%). Third, CA125, CEA, CYFRA21-1 and SCC had not been evaluated; we were not able to compare the diagnostic power of serum haptoglobin with existing biomarker in NSCLC. Last, the exact mechanism of haptoglobin for cancer’s tumorigenesis and progression was not clear, by now.

Two hundred and five NSCLC patients of Han Chinese, including one hundred and sixteen patients with adenocarcinoma, seventy-six patients with squamous cell carcinoma, and thirteen patients with other subtypes of NSCLC diagnosed and treated in the First Affiliated Hospital of Sun Yat-sen University in the southern of China, from January 2010 to January 2012 were enrolled in this study. All NSCLC patients’ diagnoses were confirmed independently by two pathologists, who reviewed pathological slides of tissue from biopsy or resected specimens. Patients who suffered hyperlipidemia, infection, liver disease, previous malignancy, received antibiotic treatment, or received adjuvant therapy before surgery were excluded from the study. All NSCLC patients received standard treatment with routine therapy, chemotherapy, and radiotherapy after the surgery operation according to NCCN guideline for NSCLC. All patients’ histopathological classification was determined according to the WHO criteria, and staged classification was defined according to the 7th edition of UICC TNM staging system [24, 25]. Two hundred and ten normal healthy controls were recruited from healthy unrelated subjects who performed routine yearly health check-up at the Physical Health Examination Centre of our medical center whose age and gender matched subjects who did not have any family history cancer were recruited in this study.

This study was approved by the Human Research Ethics Committee of the First Affiliated Hospital of Sun Yat-sen University according to the guidelines of Helsinki conventions. All participants were informed the information of the purpose of the study and the experimental procedures, and given written informed consent and applied a standardized questionnaire to gather demographic and personal information at the first visit. All subjects with NSCLC were followed up at intervals of one to two months until December 2015, and follow up time ranged from one to sixty months.

The patients’ clinicopathological variables were collected, including age, sex, treatment, histopathological findings, stage, and medication history. Prior to treatment, blood were collected from each subject in the morning between 7 AM and 10 AM for serum tests. To minimize the influence of diet on detecting serum haptoglobin levels, each subjects overnight fast of at least 8 hours before blood collected. Collected blood samples were allowed to clot and serum were separated by centrifugation at 3,000 rpm for 10 min at 4°C, and then determined in the clinical laboratory of the First Affiliated Hospital of Sun Yat-sen University, immediately. Blood fat and hemolytic sample was excluded from the study. Serum haptoglobin levels were determined by a commercially available human haptoglobin assay kit by immunoturbidimetry method (Tridelta PHASE Haptoglobin Assay, County Kildare, Ireland), using a fully automated analytical platform (Beckman Coulter AU5800, Beckman Coulter, Inc., USA). All tests were detected according to the manufacturer’s protocols.

All data statistical analyses were performed using Graphpad Prism version 5.0 (GraphPad Software Inc., San Diego, CA, USA) and SPSS version 13.0 (SPSS Inc., Chicago, IL, USA). All variables under normal distribution were shown as the mean ± standard deviation (SD). The differences between groups were determined by Mann-Whitney U test and Kruskal-Wallis test. The association between haptoglobin expression levels and various clinicopathological variables in NSCLC were evaluated by using Mann-Whitney U test or the Wilcoxon-matched test, and Pearson chi-square test or Fisher’s exact test was tested for categorical values. The statistical power was calculated by using the Power and Precision software version 4 (Biostat, NJ, USA). Receiver operating characteristics (ROC) analysis was plotted to determine the sensitivity and specificity of serum haptoglobin levels to discriminate between NSCLC and healthy controls or stratify patients at a high risk of metastasis. The diagnostic power of serum haptoglobin was assessed by sensitivity, specificity, and area under ROC curve (AUC). The cut-off value was determined by the score closest the value under both peak of sensitivity and specificity. Survival rates and curves were determined by the Kaplan-Meier method, and the comparison of differences of survival was evaluated by using the log-rank test. COX regression analysis was used for univariate and multivariate analysis of correlation between clinicopathological variables and overall survival. In all cases, P values less than 0.05 were considered statistically significant, and all statistical tests were two-sided.

8. Quaye IK. Haptoglobin, inflammation and disease. Transactions of the Royal Society of Tropical Medicine and Hygiene. 2008; 102:735–742.