Inverse role of distinct subsets and distribution of macrophage in lung cancer prognosis: a meta-analysis

Background: Tumor-associated macrophages (TAMs) play a crucial role in the regulation of local inflammatory and immune response of tumor microenvironment, being associated with worse outcome of several solid tumors. But the prognostic value of tumor-infiltrating TAMs in lung cancer is still controversial.

Methods: We conduct a meta-analysis of 3055 patients in 21 studies searched from PubMed and Medline to investigate the correlation between tumor-infiltrating TAMs, including distinct TAM subsets and tissue distribution, and survival of lung cancer. Survival data were computed into odds ratios (ORs) and pooled using Mantel–Haenszel random-effect model. All statistical tests were two-sided.

Tumor-associated macrophages (TAMs) play a crucial role in the local inflammatory response and immunosurveillance of cancer [1, 2]. Plentiful studies have demonstrated that tumor-infiltrating TAMs are associated with worse outcome of human lung cancer [3–10]. However, other studies reported that tumor-infiltrating TAMs were associated with favorable outcome of human lung cancer [11, 12]. It is reported that the type, functional orientation, density, and location of immune cells within distinct tumor regions are all associated with cancer patient survival [13]. Therefore, the divergence maybe due to both the heterogeneity of TAM subsets and functional plasticity of TAMs in local tumor microenvironment [14, 15].

TAMs are generally characterized by the expression of cell surface marker CD68. However, the results from studies evaluating the correlation between TAMs and survival of lung cancer using CD68 as a marker of TAMs are still contradictory [5, 7, 9, 10, 16-20]. Recently, accumulating studies subdivided TAMs into the classically activated M1 phenotype and the alternatively activated M2 phenotype with an opposite function in tumor immunity [21]. It is reported that tumor-infiltrating M1 is associated with favorable outcome of human lung cancer [11]. On the contrary, some studies suggested that tumor-infiltrating M2 was associated with worse outcome of human lung cancer [8, 9, 11, 12, 18, 22]. Moreover, TAMs in tumor nest were reported to be associated with better outcome of human lung cancer [5, 11, 16-18, 20]. Other studies showed that increased TAMs in tumor stroma were negatively correlated with the survival of lung cancer [5, 11, 16-20, 22].

Thus, further studies are needed to clarify the role of tumor-infiltrating TAMs, subsets and intratumoral distribution of TAMs in prognostic prediction of lung cancer. We therefore conducted an exhaustive meta-analysis combining evidence to evaluate the prognostic value of TAMs in human lung cancer. This meta-analysis came into a conclusion that elevated TAMs were associated with worse survival of lung cancer, especially M2 phenotype and TAMs distributing in tumor stroma. While elevated M1 phenotype and TAMs distributing in tumor islet were associated with better survival of lung cancer. Our study suggests that the subsets and tissue distribution of TAMs are very meaningful in prognostic prediction of lung cancer.

Literature searches yield 2338 records and the results are shown in Supplementary Figure S1. The potentially relevant articles were screened for eligibility by duplication, language, abstract and article type, and 1436 records were excluded. Next, 692 citations were excluded for detailed evaluation and at last 21 studies with survival data were included. Characteristics of studies including OS or DFS data are shown in Table 1. A total of 3055 patients were included in those studies.

Evaluation and density of TAM

Association of TAM with survival of lung cancer 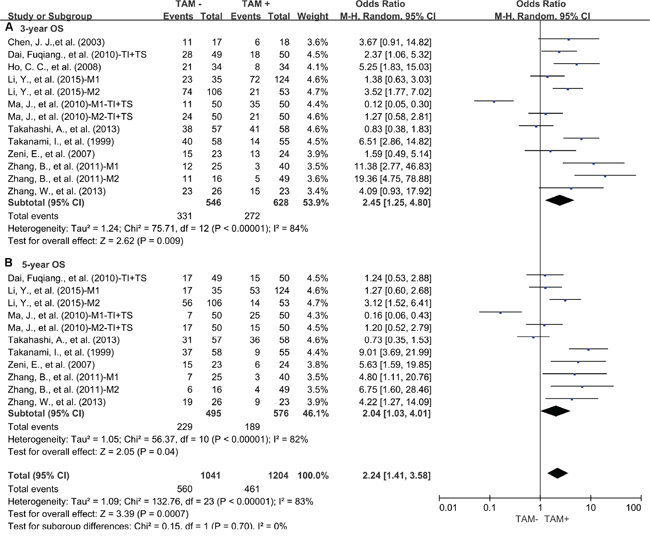 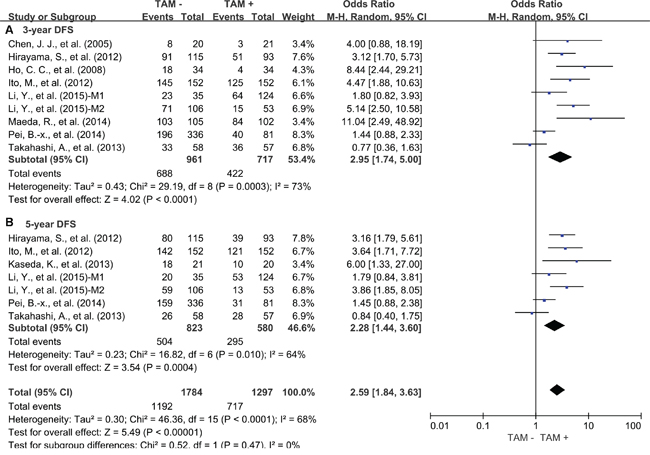 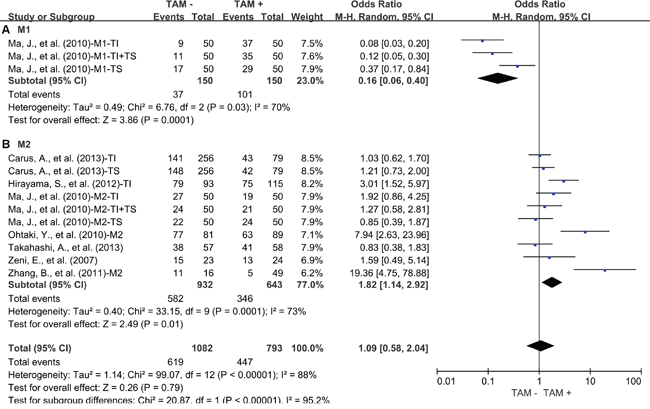 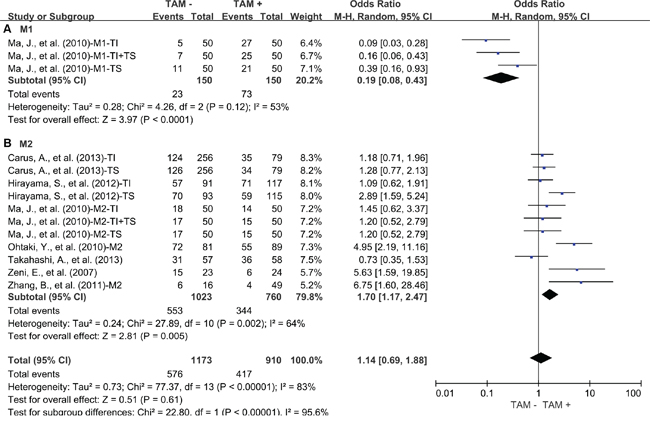 Funnel plot analysis and Egger’s test showed that there was no statistical evidence of publication bias in our meta-analysis.

Some limitations also exist in this meta-analysis. First, the markers and cut-off values for assessing TAMs expression are inconsistent. Second, significant heterogeneity observed among studies cannot be completely interpreted despite the use of appropriate meta-analytic technique with random-effect models. Finally, small studies with negative results may not be published, resulting in publication bias.

In conclusion, our analyses show that elevated density of TAMs in human lung cancer tissues, especially M2 or CD68+ TAMs in tumor stroma, is associated with worse prognosis in human lung cancer, which suggests that directly targeting TAMs or M2, or reprogramming TAMs from an M2 to an M1phenotype could be promising therapeutic approaches for lung cancer.

This meta-analysis was carried out in accordance with preferred reporting items for systematic reviews and meta-analyses statement [26].

PubMed and Medline were searched for studies evaluating the density of tumor-infiltrating TAM and survival in lung cancer from 1964 to August 2015. The search terms included “Macrophages” and “Lung Neoplasms” and the results were limited to human studies of lung cancer. We identified a total of 1172 and 1166 entries, respectively. Eligibility criteria were the measurement of tumor-infiltrating TAM by immunohistochemistry (IHC), availability of survival data for at least 3-year survival, and publication in English. Studies Citation lists of retrieved articles were manually screened to ensure sensitivity of the search strategy. Study selection was based on the association of the density of TAM in tumor tissue and survival. Inter-reviewer agreement was assessed using Cohen’s kappa coefficient. Disagreement was resolved by consensus.

Overall survival (OS) or disease free survival (DFS) at 3 and 5 years were the primary endpoints. Tumors were classified by TAM density using cut-off as defined by individual studies.

Two authors (Pin Wu and Dang Wu) independently extracted information using predefined data abstraction forms. The following details were extracted by 2 reviewers (Pin Wu and Dang Wu): number of patients, antibody used for the evaluation, technique used to quantify TAM, and cut-off to determine high density of TAM. Survival data were extracted from tables or Kaplan–Meier curves for both TAM low (control group) and high group (experimental group). The studies included in our meta-analysis were all cohort studies. Two independent authors evaluated the quality of each included study using Newcastle-Ottawa Scale (NOS) [27]. The studies with 6 scores or more were considered as high quality studies. A consensus NOS score for each item was achieved finally.

The relative frequency of survival at 3 and 5 years between the control and experimental groups was expressed as an odds ratio (OR) and its 95% confidence interval (CI). Sensitivity analyses were carried out for different analytical methods and cut-offs for defining the density of TAM and NOS scores for quality assessment of included studies.

Data were extracted from the primary publications and combined into a meta-analysis using RevMan 5.3 analysis software (Cochrane Collaboration, Copenhagen, Denmark). Estimates of ORs were weighted and pooled using the Mantel–Haenszel random effect model. Statistical heterogeneity was assessed using the Cochran’s Q and I2 statistics. Differences between subgroups were assessed using methods as previous described by Deeks et al. [28]. Meta-regression analysis was conducted using Stata 12.0 software (StataCorp LP, College Station, TX). All statistical tests were two-sided, and statistical significance was defined as P value less than 0.05. No correction was made for multiple statistical testing.

24. Mantovani A, Allavena P. The interaction of anticancer therapies with tumor-associated macrophages. The Journal of experimental medicine. 2015; 212:435-445.

27. Stang A. Critical evaluation of the Newcastle-Ottawa scale for the assessment of the quality of nonrandomized studies in meta-analyses. European journal of epidemiology. 2010; 25:603-605.