Currently, surgery is the best treatment for early pancreatic cancer. However, only 10–35% of stage I patients will live more than five years after surgery. To help increase the chance of being cured, and improve survival of patients with early-stage cancer, a combination of adjuvant chemotherapy (ie. 5-fluouracil or gemcitabine) and/or radiation therapy is often given in addition to surgery. It has been suggested that subsets of patients with pancreatic cancer, such as patients with positive lymph nodes, may be more likely to benefit from adjuvant chemoradiation. However, studies have found mixed results. A meta-analysis of 4 randomized controlled trials found that adjuvant chemoradiation had a similar lack of benefit in lymph node-positive and -negative patients [2]. However, an exploratory subset analysis of 94 patients who underwent distal pancreatectomy at Johns Hopkins Hospital suggested that patients with positive lymph nodes derived greater benefit from adjuvant chemoradiation than those with negative nodes [3]. Previous analyses of the SEER database suggested an advantage for adjuvant radiation therapy after pancreatic tumor resection [4–6]. Subgroup analysis revealed that the benefit of PORT was limited to lymph node-positive (N1) patients [6]. Intense interest has centered on similar considerations in the addition of postoperative radiation therapy (PORT) to standard therapy such as chemotherapy and survival in pancreatic cancer. However, consensus on the efficacy of PORT has not been made. We therefore performed a retrospective study to evaluate the association of PORT and survival in patients with pancreatic adenocarcinoma receiving standard therapy.

We identified 5646 patients who had undergone tumor surgery for a first primary pancreatic adenocarcinoma diagnosed between 1988 and 2012. We excluded 154 patients without accurate total lymph node count (TLN) information and 1 patient without positive lymph node count (PLN) information. The remaining 5491 patients included 5178 who underwent lymph node resection and 313 who did not. A total of 5304 patients were included in the final analyses: 2093 patients who had undergone PORT and 3211 patients who did not receive treatment with radiation (187 patients treated with preoperative radiation therapy were excluded). The median age at diagnosis was 65 years (interquartile range, 58–73 years). The overall median follow-up time was 56 months. Compared with patients who had not undergone PORT, those who had undergone PORT were more likely to be younger, to have regional-stage disease, to have disease located at the head of the pancreas, and to have well- or moderately well-differentiated tumors (Table 1). 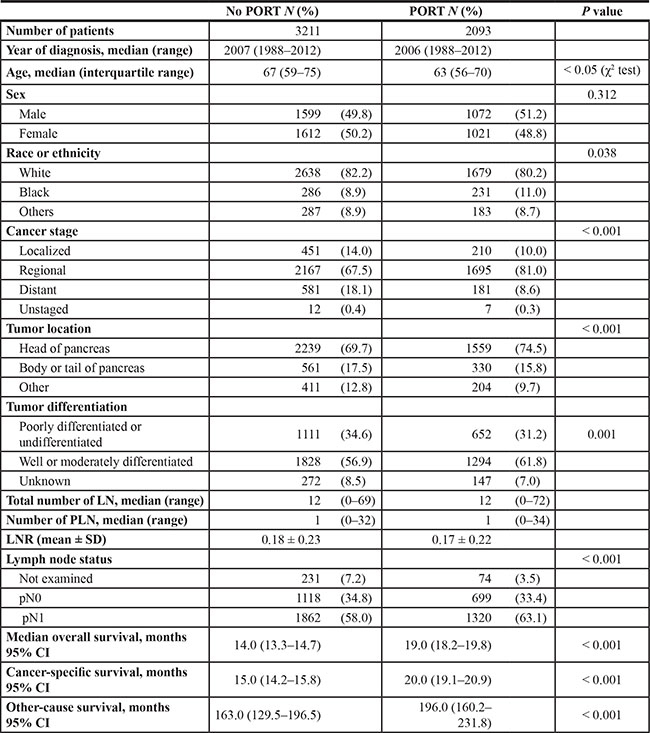 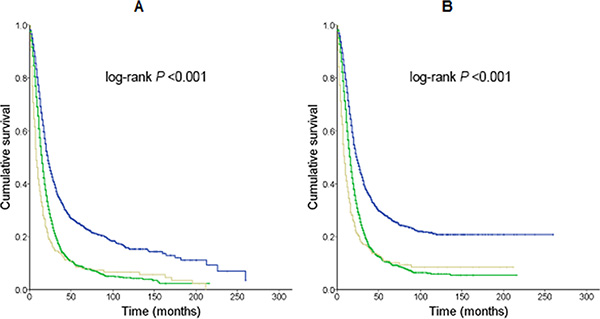 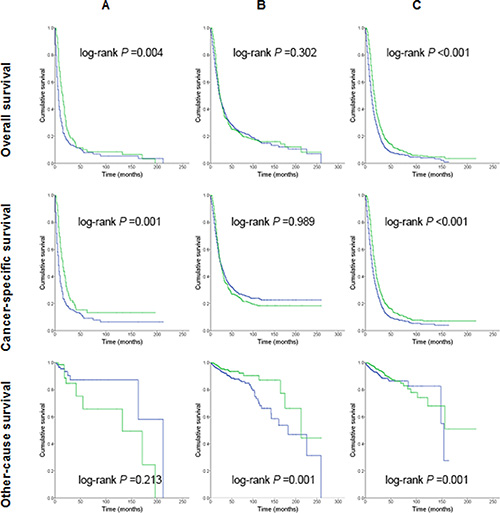 Univariate and multivariate analyses based on the numbers positive lymph nodes and lymph node ratio in pN1 disease showed that patients who had undergone PORT had better overall and cancer-specific survival in each subset (PLN1–2, PLN ≥ 3, lymph node ratio (LNR) < 0.22, and LNR ≥ 0.22), but patients with pN0 disease did not (Table 2). In addition, there was a trend toward an overall and cancer-specific survival advantage in patients with LNR ≥ 0.22 who had undergone PORT.

Table 2: Survival analyses for mortality based on receipt of postoperative radiotherapy in patients with pancreatic adenocarcinoma

Our study shows that PORT is associated with better overall and cancer-specific survival in pN1 patients with pancreatic adenocarcinoma. The benefit of PORT is maintained in stage N1 patients no matter how many positive lymph nodes are dissected. Patients who had undergone PORT had better other-cause survival than those who had not undergone PORT. This suggests that the addition of PORT not only extended the cancer-specific survival time by amelioration of the cancer itself but also decreased treatment-related death. Multivariate analysis revealed that the following factors were associated with shorter overall and cancer-specific survival: diagnosis before 2007, older age, black race/ethnicity, advanced-stage disease, tumor at body or tail of the pancreas, poorly differentiated or undifferentiated disease, LNR ≥ 0.22, and no PORT.

Several prospective trials have demonstrated that patients with pancreatic cancer benefit from PORT when it is included with chemotherapy. In Gastrointestinal Tumor Study Group trial 9173 (GITSG 9173), patients who underwent margin-negative resection and postoperative radiation with concurrent bolus 5-fluorouracil had a better median survival (20 months) than surgery alone (11 months) (P = 0.035) [7]. Other trials have shown no difference in median overall survival between patients receiving chemotherapy alone and patients receiving chemoradiation, although chemoradiation reduced the likelihood of local recurrence [8, 9]. Morak et al. also found no difference in overall survival for chemoradiation versus surgery alone but did find a progression-free survival benefit [10]. Moreover, patients with adjuvant chemoradiation had less pain, less nausea and vomiting, and improved global functioning [11]. Conversely, worsened outcomes with radiation therapy were reported by the ESPAC-1 trial (n = 289) regardless of whether patients received chemotherapy [12]. However, methodological flaws have prohibited an accurate evaluation of PORT in that study [13]. In a meta-analysis of 15 eligible randomized controlled trials including 1128 patients, chemoradiation could benefit the long-term survival of patients with locally advanced pancreatic cancer compared with chemotherapy or radiation therapy, although it may also increase treatment-related toxicities [14].

There are several limitations to this study. First, the analysis was retrospective in nature. As a result, treatment was not randomized. However, multiple imputation techniques showed similar results to the complete data imputation techniques, which indicates that, assuming the data are missing at random, the conclusions are robust. Secondly, the study data were affected by changes in the extent of resection and lymphadenectomy as well as in radiation techniques over the years. These changes were taken into account by adjusting for the year of diagnosis in the multivariable models. Finally, the SEER dataset does not contain information on pathologic margin status or adjuvant chemotherapy. The absence of information on chemotherapy may lead to an overestimation of the efficiency of radiation therapy when SEER data is used [16]. However, during the study period, adjuvant chemotherapy was recommended for all patients who underwent surgical resection and did not have significant contraindications.

We abstracted data from the National Cancer Institute’s Surveillance, Epidemiology, and End Results (SEER) 18 registries database (November 2014 submission) [17]. In total, the database covers approximately 27.8% of the US population (based on the 2010 Census). Different years of diagnosis, ranging from 1973 to 2012, are included for different registries. The data reported in this study represent the most recent follow-up available in the SEER database (December 31, 2012).

We used SEER*Stat (version 8.2.1) to generate a case list. Patients aged 18–90 years who underwent primary pancreatic tumor surgery for which complete lymph node staging data were available, had a histologically confirmed first primary pancreatic adenocarcinoma, and were diagnosed between January 1, 1988, and December 31, 2012, were eligible to be included in the study. This SEER submission included cases through December 31, 2012, which would represent either the date of the last cancer diagnosis or the date of last follow-up. The exclusion criteria were survival time of less than 30 days after a confirmed diagnosis; a previous diagnosis of malignant disease; and pancreatic cancer reported from a nursing home, hospice, autopsy, or death certificate.

We generated a case list with information on the following variables: year of diagnosis, age at diagnosis, sex, race/ethnicity, marital status at diagnosis, tumor location, cancer stage, tumor grade, positive regional nodes number, examined regional nodes number, radiation, vital status, survival in months, cause-specific death classification, and other-cause-of-death classification. The last two variables indicate whether the person died of the cancer (cause-specific survival) or causes other than the cancer. TLN and PLN were also retrieved. LNR was defined as the PLN divided by the TLN. Because patients cannot be identified from the data, the Institutional Review Board of the First Affiliated Hospital of Soochow University exempted this study from review.

We used the vital status recode (study cutoff used), SEER cause-specific death classification, and SEER other-cause-of-death classification variables to extract data on the status of patients at the time of last follow-up. Based on this information, we calculated overall, cause-specific, and other-cause survival rates. We used the survival in months variable to extract information on time from the date of diagnosis to last follow-up. SEER*Stat estimates survival time in months by subtracting the date of diagnosis from the date of death or last contact. Cancer-specific survival was defined as the time from diagnosis to death from recurrent disease. We used the survival in months flag variable to identify missing or incomplete survival data.

The patients’ clinicopathologic factors were compared using the χ2 and Mann-Whitney U tests. Survival times for different strata (ie. total and positive lymph node numbers) were compared using the log-rank test. We created Kaplan-Meier survival curves stratified by lymph node status. We performed a univariate Cox proportional hazards regression analysis to determine the hazard ratios (HRs) of death with respect to year of diagnosis (before or after year 2007), age, sex, race/ethnicity, cancer stage, tumor location, tumor differentiation, N stage, PLN (1–2 or ≥ 3), LNR (< 0.22 or ≥ 0.22), and PORT. We performed multivariable analyses on the association between PORT and survival duration, adjusting for all the applicable confounders listed above. All P values were two-tailed. A P value less than 0.05 was considered statistically significant. All statistical analyses were performed using SPSS version 22.0 (IBM Inc., Armonk, NY).

We thank Dawn Chalaire in the Department of Scientific Publications of The University of Texas MD Anderson Cancer Center for editing the manuscript.

The authors have no conflicts of interests to disclose.