Lung cancer is the most common cancer in terms of both incidence and mortality worldwide, accounting for 13% of the total cancer cases and 18% of the cancer deaths [1–3]. It’s estimated that there will be 0.221 million new cases of lung cancer and 0.158 million deaths in United States in 2015 [4]. According to the National Office for Cancer Prevention and Control in China, lung cancer ranked the third most prevalent cancers among Chinese population [5]. As a complex disease, carcinogenesis of lung cancer is strongly affected by genetic and environmental factors and their complex interactions [6–8].

MicroRNAs (miRNAs) are small (approximately 18-24 nt), noncoding RNAs with important functions in development, cell differentiation, and regulation of cell cycle and apoptosis [9]. They could influence tumorigenesis through their regulation of specific proto-oncogenes and tumor suppressor genes [10–16]. Studies have shown that miRNAs were extremely useful potential agents for clinical diagnostics as well as in personalized care for individual patients [17, 18]. Polymorphisms in the miRNA pathway are emerging as powerful tools to study the cancer biology and have the potential to be used in cancer prognosis and diagnosis, especially for the genetic variants located in the mature miRNAs sequence, which could affect transcription of miRNA primary transcripts and processing of miRNA precursors [19, 20].

Association between the mature microRNAs’ polymorphisms and risk of lung cancer

Table 2: Genotype frequencies of candidate SNPs and association with risk of lung cancer in Stage I

Validation of the significant associations in stage II

Table 3: Genotype frequencies of selected SNPs and association with risk of lung cancer in Stage II and the merged results

Table 4: Stratified analyses of selected SNPs and association with risk of lung cancer by smoking status

1adjusted for age, and gender.

Functional validations of effect mir-499 and in mir-608 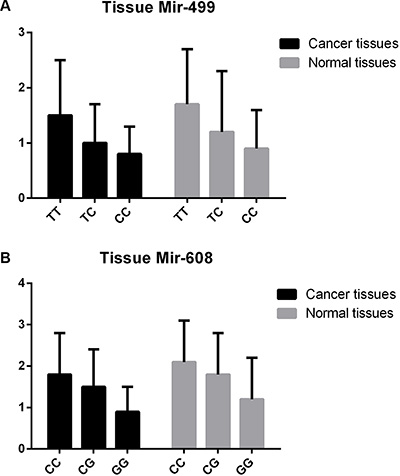 Figure 1: The expression level of mir-499 and mir-608 in lung cancer tissues. 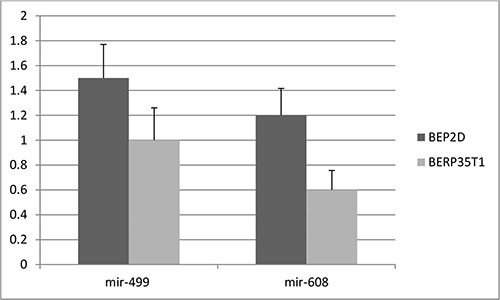 In this two-stage, case-control study with a total of 1,200 lung cancer cases and 1,200 controls from Han Chinese population, we investigated the associations of 11 common SNPs located in miRNAs’ mature sequences with risk of lung cancer. Our results showed that rs3746444 in mir-499 and rs4919510 in mir-608 were significantly associated with increased risk of lung cancer. Rs3746444 in mir-499 was also significantly associated with poor survival of lung cancer. We also found that the expression levels of mir-499 and mir-608 were significantly lower than those of adjacent normal tissues, while the carriers of minor alleles have lower expression levels of mir-499 and mir-608 than those of major alleles. To our knowledge, this is the first study to use multilevel approaches, including genetic association study and gene expression analyses in plasma and tissues, to systematically investigate the effect of genetic variants located in mature microRNAs in relation to etiology of lung cancer.

MicroRNAs have becoming focused circulating biomarkers, given their potential in the translational area and the role of representative readouts of both primary tumor and metastatic deposits [9, 21–23]. Genetic variants located in Mature MicroRNAs have been also explored to discover potential clues for pathogenesis of many diseases [24–30]. Recently, Zhang et al [29] evaluated five SNPs in the mature sequence of microRNAs, and found miR-449b rs10061133 and miR-4293 rs12220909 polymorphisms are associated with decreased esophageal squamous cell carcinoma. Qiu et al [25] evaluated 8 SNPs in the mature sequence of microRNAs, and the results showed that rs4919510 in mature mir-608 sequence is associated with an increased risk of nasopharyngeal carcinoma. Ryan et al [31] found the GG genotype of rs4919510 in mir-608 was associated with an increased risk of death of colorectal cancer. In current study, we also identified rs4919510 in mir-608 was significantly associated with increased risk of lung cancer. Functional validation also confirmed that minor allele G of rs4919510 could increase the expression of mir-608, both in plasma and tissues.

Association of Mir-499 rs3746444 with cancer risk has been fully explored [32–36]. A recent meta-analysis showed that miR-499 rs3746444 polymorphism contributed to increased risk of many cancers (GG versus AA: OR = 1.24, 95% CI: 1.01-1.52; G versus A: OR = 1.11, 95% CI: 1.01–1.23) [32]. This is consistent with our results, which revealed that rs3746444 in mir-499 was significantly associated with increased risk of lung cancer, and the carriers of minor allele C have higher expression levels of mir-499 than those of major allele T. Very recently, Qiu et al [37] also reported that rs3746444 could contribute to poor prognosis by modulating cancer-related genes’ expression and thus involve tumorigenesis and anti-chemotherapy. Furthermore, the in silico functional analysis of rs3746444 and rs4919510 was conducted by miRVaS: a tool to predict the impact of genetic variants on miRNAs [38]. The results showed that rs3746444 was located at mature3p(a+5)seed of mir-499. It could change the hairpin structure and affect the mature of the mir-499. While rs4919510 was located at mature5p(a+23) of mir-608, could also change the hairpin structure and affect the mature of the mir-608. All the evidence presented above validated the functions of genetic variants located in mature microRNAs in relation to etiology of cancers.

In summary, our study showed that rs3746444 in mir-499 and rs4919510 in mir-608 could contribute to the carcinogenesis of lung cancer. Although the existence of some limitations, like possible selection bias in case-control study, and limited sample size for interaction analyses, our study still strongly supports the contribution of causative variants located in the mature microRNAs for lung cancer through multilevel approach validations. Further studies with functional and mechanism characterizations, are warranted to provide additional definitive evidence.

This study consisted of 500 patients with newly diagnosed lung cancer and 500 cancer-free controls in stage I, while 700 lung cancer cases and 700 cancer-free controls in stage II. Patients, which were histopathologically confirmed lung cancer cases, were consecutively recruited between October 2009 and December 2013. While controls were randomly selected from a healthy screening program in the same region and the same population during the same time period as the cases were enrolled. Demographic information were collected for each participant according to a unified procedure. For each participant, approximately 5ml whole blood was obtained to extract genomic DNA for genotyping analysis after the face to face interview. This study conformed to the principles outlined in the Declaration of Helsinki and was approved by appropriate institutional review board. Written consent was obtained from all participants of this study.

Genomic DNA was extracted from 3-ml of peripheral blood sample using the QIAamp DNA extraction kit (QIAGEN). The candidate SNPs were genotyped using TaqMan real-time polymerase chain reaction (PCR) Assay (Applied Biosystems, Foster city, CA) without the information of the case or control status of the subjects. We used the ABI Prism 7900HT Sequence Detection System analyze the endpoint fluorescence. Quality control was monitored by including 5% duplicate and negative control, with the 100% concurrence rate of the duplicate sets. The average call rate for the candidate SNPs genotyped was > 99.9%. All related primers were provided in Supplemental Table 1.

The BEP2D cell line (a human papillomavirus 18-immortalized human bronchial epithelial cell line), and The BERP35T1 malignant transformant cell line which were derived from the BEP2D cell line, were cultured to investigate the function of miR-499 and miR-608.

RNA extraction and Quantification of miRNA by qRT–PCR

Pearson’s x2 test or t-test were used to examine differences between cases and controls in the distribution of demographic characteristics. To evaluate the associations between the genotypes and lung cancer risk, odds ratios (ORs) and 95% confidence intervals (CIs) were calculated by unconditional logistic regression analysis with adjustment for age, gender, and smoking status. The Hardy-Weinberg equilibrium (HWE) for the distribution of each variant was evaluated using the goodness of-fit χ2 test by comparing the observed genotype frequencies with the expected ones in the controls. All statistical analyses were conducted by SPSS v18.0 software, while a two-tailed P < 0.05 was used as the criterion of statistical significance.

Sincere acknowledgments should be given to all subjects who participated in this project.