The PVT1 lncRNA has recently been involved in tumorigenesis by affecting the protein stability of the MYC proto-oncogene. Both MYC and PVT1 reside in a well-known cancer-risk locus and enhanced levels of their products have been reported in different human cancers. Nonetheless, the extension and relevance of the MYC-PVT1 deregulation in tumorigenesis has not yet been systematically addressed.

Here we performed a pan-cancer analysis of matched copy number, transcriptomic, methylation, proteomic and clinicopathological profiles for almost 7000 patients from 17 different cancers represented in the TCGA cohorts. Among all cancers types, kidney renal clear cell carcinoma (KIRC) showed the strongest upregulation of PVT1 and increased levels of both MYC and PVT1 correlated with the clinical outcome. PVT1 misregulation in KIRC is mostly associated to promoter hypomethylation rather than locus amplification. Furthermore, we found an association between MYC levels and PVT1 expression, which impacted on MYC-target genes.

Collectively, our study discloses the role of PVT1 as a novel prognostic factor and as a molecular target for novel therapeutic interventions in renal carcinoma.

Long non-coding RNAs (lncRNAs) play important regulatory roles in the gene expression and are deregulated in a variety of tumors [1]. The mechanisms through which lncRNAs contribute to the regulatory networks that lead to cancer development are diverse. lncRNAs can regulate gene transcription by binding promoter regions and/or changing histone marks and the chromatin state [2]. In addition, they may interact with and alter the activity of proteins, which may be important for cancer biology [3]. Recent findings revealed that the PVT1 lncRNA controls MYC protein stability and they both cooperate to promote cell proliferation in cancer [4]. PVT1 protects MYC protein from degradation by reducing the phosphorylation of a threonine residue [4].

MYC expression is complex and modulated at multiple levels but becomes deregulated in many human cancers. Interestingly, MYC and the PVT1 lncRNA gene reside in 8q24, one of the most highly amplified locus across malignant tissues [5, 6]. Overall, MYC overexpression and PVT1 up-regulation have been reported for several human cancers [7, 8]. However, the extension and relevance of MYC and PVT1 alterations in tumorigenesis has not yet been thoroughly addressed.

In this study, we have integrated multi-omics data from The Cancer Genome Atlas (TCGA) to explore the relevance of MYC-PVT1 deregulation across several cancer types. Our pan-cancer analysis revealed that kidney renal clear cell carcinoma (KIRC) shows the most extreme up-regulation of PVT1 and the strongest connection between MYC-PVT1 enrichment and clinical outcome. In KIRC patients, increased PVT1 expression associated significantly with high MYC protein levels and misregulation of MYC responsiveness genes. Moreover, we found that PVT1 up-regulation in KIRC is the result of promoter hypomethylation rather than copy number amplification. Altogether, our data disclose the prognostic power of the PVT1 in KIRC and support its role as potential therapeutic target.

We set out to investigate the impact of MYC-PVT1 deregulation in several cancers using multi-omics data for approximately 7000 patients from the TCGA (Table S1). Overall, evaluation of copy number and transcriptome patterns showed distinctive MYC-PVT1 profiles across the 17 cancer types inspected (Figure 1A). MYC-PVT1 locus amplification was widespread and present in over half of the patients for most tumor types (Figure S1A). Hence, low frequency (less than 20%) of locus gain was observed for renal cancers (KIRC and KIRP), thyroid carcinoma (THCA), pheochromocytoma and paraganglioma (PCPG). Although widespread across cancers, the extensive locus gain was not mirrored by an overall up-regulation of both genes (Figure 1A). Increased expression levels of PVT1 were observed for almost all tumors when compared to the surrounding normal tissues, with KIRC showing the largest difference (Figure 1B and S1B). A thorough analysis revealed a high prevalence of PVT1 up-regulation in many tumors, spreading to 80% of the KIRC patients (Figure 1C). On the contrary, MYC misregulation differed according to the malignancy type (Figure 1B and S1B) and only colorectal cancers (COAD and READ) showed a high frequency of MYC up-regulation (Figure 1C). Furthermore, PVT1 overexpression was also observed for several KIRC cell lines (Figure S1C). Although PVT1 locus harbors several miRNA genes, their expression levels were similar between tumor and normal tissues (Figure S1D). 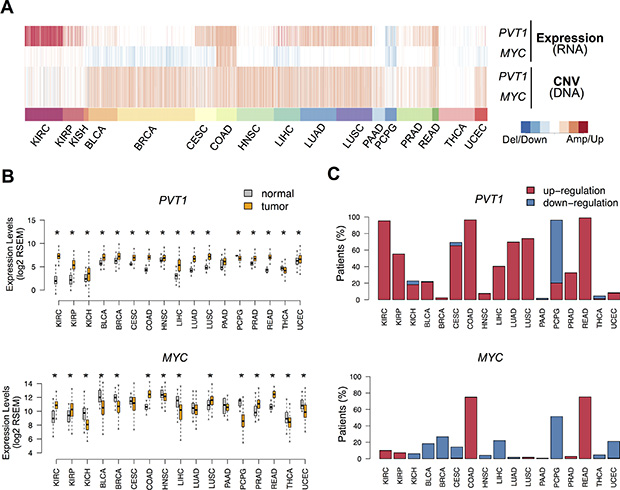 Considering the widespread PVT1 misregulation, we next assessed whether high expression levels would decrease the clinical patient outcome. Kaplan-Meier survival analyses revealed that PVT1 overexpression was associated with worse survival rates in KIRC and pancreas adenocarcinoma (PAAD) (Figure 2A, 2B and S2A). High levels of MYC lead to low survival in bladder cancer (BLCA) (Figure 2C and S2B). Furthermore, supporting the impact of PVT1 in the clinical outcome of KIRC patients, we observed that high expression levels were significantly associated with neoplasm status after surgery and advanced clinical stage or metastasis (Fisher’s Exact -test p-value < 0.05) (Figure 2D). Interestingly, besides PVT1, only 5 other genes showed a strong misregulation consistently linked with clinical outcome and tumor features in KIRC (phenotype permutation p-value < 0.001, Figure 2E and Table S2). Most of these genes have been previously associated with worst survival or more aggressive state of tumors: MYBL2 [9]; IL20RB [10]; MFSD4 [11]; CRHBP [12] and CWH43 [13]. These results indicate PVT1 as a novel prognostic biomarker in KIRC. 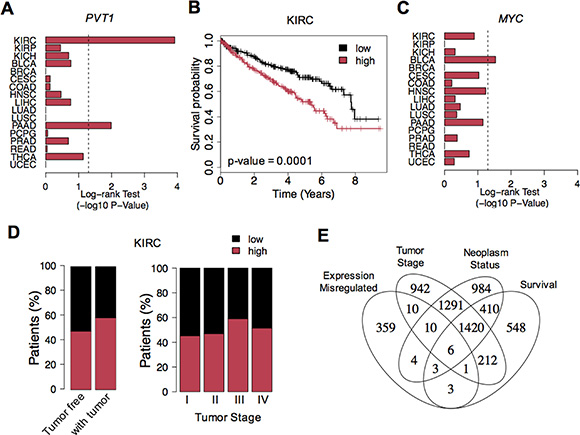 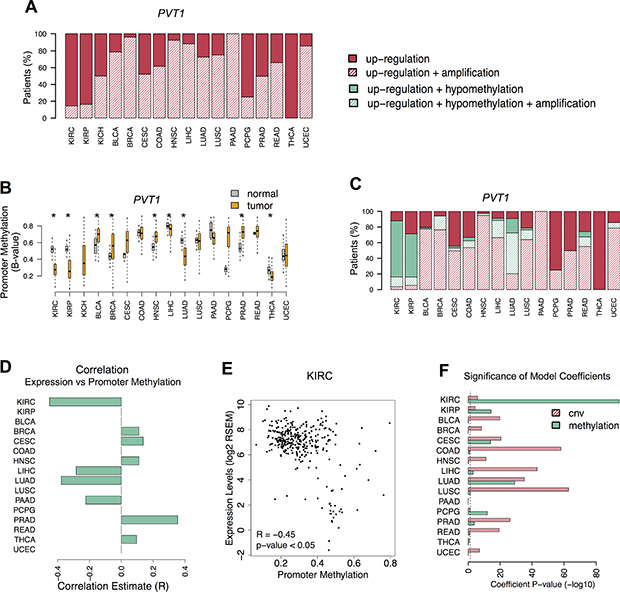 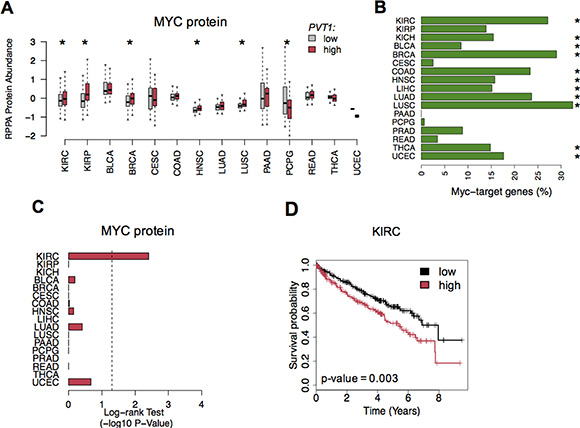 Collectively, our results show that MYC-PVT1 misregulation appears to be an important predictor of poor prognosis in renal carcinoma.

Herein we performed a comprehensive analysis of almost 7000 patients from the TCGA to study the disrupted patterns of MYC-PVT1 in cancer. Our pan-cancer analysis using diverse multi-omics data revealed that KIRC is the malignancy for which MYC-PVT1 misregulation is most strongly associated with a poor overall survival.

Although PVT1 gene is located in one of the most highly amplified locus across malignant tissues [5, 6], we found that less than 20% of the KIRC patients presented PVT1 locus gain. Indeed, we further show that the increased PVT1 lncRNA levels in KIRC patients are associated with PVT1 promoter hypomethylation. Hence, our results suggest that promoter hypomethylation is an important cause of PVT1 up-regulation in tumor patients lacking 8q24 locus amplification. Active DNA demethylation has been associated to the Ten-eleven translocation (TET) family proteins, which oxidize 5-methylcytosine into 5-hydroxymethylcytosine [15]. TET overexpression leads to promoter demethylation and transcription activation of specific genes [16, 17]. Since TET overexpression was already observed in different cancers [18, 19], such misregulation could be responsible for the hypomethylation of PVT1 promoter in KIRC.

Recent findings revealed that gain of PVT1 expression was required for high MYC protein levels in human cancer cells [4]. Indeed, our study reveals that KIRC patients show consistently high levels of both PVT1 lncRNA and MYC protein, leading to misregulation of MYC responsiveness genes. Notably, increased levels of MYC protein and MYC-target genes are linked to worst prognosis in renal carcinoma. Thus, our data suggest that PVT1 may act as an oncogene in renal carcinoma via stabilization of MYC protein, and subsequently activation of MYC pathway. However, future studies are required to confirm that high MYC protein levels in KIRC are caused by PVT1-induced MYC protein stabilization.

Inhibition of MYC is an attractive pharmacological approach for cancer treatment [20]. For instance, expression of a dominant-negative inhibitor of MYC heterodimerization in the mouse model for lung adenocarcinoma resulted in tumor regression [21]. However, MYC is an important transcription factor and an essential protein, thus therapeutic interventions to directly inhibit MYC have severe effects in patients [20]. Since loss of PVT1 RNA in colon cancer cell line reduces MYC protein to more normal levels [4], inhibiting PVT1 could be a more accessible and feasible therapeutic strategy for renal cancer. Modulation of lncRNAs functions have showed promising anticancer effects and expanded the development of lncRNA-based cancer therapies involving small interfering RNAs, antisense oligonucleotides, ribozymes and aptamers [22].

In conclusion, our study reveals that PVT1 is strongly overexpressed in KIRC and associated to the enhancement of MYC signaling and worst clinical outcome. Moreover, our findings highlight the role of PVT1 as biomarker for KIRC and a promising therapeutic target for cancer treatment.

Copy number levels from GISTIC algorithm represented locus loss (-2 for possible homozygous or -1 for heterozygous loss), locus gain (2 for possibly homozygous or 1 for heterozygous gain) and no alteration (0). Putative magnitudes of variations were considered for linear models analysis, whereas to determine patients with locus gain or deletion values were resumed to -1 (loss) or 1 (gain).

TCGA expression data quantified as RSEM (RNA-Seq by expectation-maximization) [26] was logarithmically transformed (base 2) in order to follow a normal distribution. The statistical significance of differences in expression levels between normal and tumor samples was assessed using limma R Package [27]. To classify each patient based on gene expression misregulation, the expression of each tumor sample was compared to the distribution of normal samples for the same cancer type. Thus, a Z-score was calculated for each tumor sample and the statistical significance was assessed assuming a normal distribution. Finally, p-values were adjusted using FDR method to correct for multiple testing.

TCGA methylation levels were obtained as Beta-values (using the intensity of the Methylated and Unmethylated Alleles), ranging between 0 (unmethylated) and 1 (fully methylated). Beta-values for microarray probes located in the promoter region (from 2 Kb upstream to 100 bp downstream of the TSS) were averaged to obtain the final promoter levels. Methylation levels from GEO BS-seq datasets were obtained using Bismark [33] and percent methylation was called averaging CpG sites from the promoter region.

RPPA Protein abundance values were normalized using a z-score transformation. Tumor samples were split according to PVT1 expression levels (median value used as cut-off). The statistical significance of differences in MYC protein levels between patients with low and high PVT1 expression was assessed using Student’s T-test. The statistical significance of differences in survival in the Kaplan-Meier analysis was assessed using the Log- rank test and splitting the tumor samples in two groups: low and high MYC protein levels (median value used as cut- off). Different cut-off values were tested (Figure S6). At least 79% of the cancers contained adequate sample size for the survival analysis (Table S4)

We thank our colleagues Sérgio de Almeida and Nuno Barbosa-Morais for critical comments and suggestions. This work was supported by Fundação para a Ciência e Tecnologia (FCT), Portugal (IF/00510/2014).

IP obtained the data and performed the statistical analyses, with collaboration from JT and SC. ARG conceived the project and wrote the manuscript. All authors read and approved the final manuscript.