Lung cancer is the leading cause of cancer death worldwide and accounted for 1.37 million deaths in 2008 (WHO) [1]; such deaths are projected to continue rising [1, 2]. Non-small cell lung cancer (NSCLC), which accounts for about 85% of lung cancer, is divided into three main subtypes: squamous cell carcinoma, adenocarcinoma, and large cell carcinoma. Epidermal growth factor receptor (EGFR) is overexpressed in up to 60% of NSCLCs and is a therapeutic target [3]. Unfortunately, the therapeutic inhibition of EGFR results in cancer regressions in only 10% to 20% of NSCLC patients [4]. In addition, despite optimal surgical treatments of stage I or stage II NSCLCs, about 40% to 60% of patients still die of recurrence [5, 6], which is the appearance of a new episode after therapy. Thus, it is essential to identify novel biomarkers or even therapeutic targets for NSCLC tumorigenesis and recurrence.

Mitogen-activated protein kinase kinase kinase kinase (MAP4K) family — including HPK1/MAP4K1 [7, 8], GCK/MAP4K2, GLK/MAP4K3 [9-12], HGK/MAP4K4 [13-15], and KHS/MAP4K5 — is a subgroup of the mammalian STE20 family of serine/threonine protein kinases [16, 17]. MAP4K family kinases are the upstream regulators of the MAP kinase cascades that regulate various cellular functions, such as proliferation, apoptosis, and migration [18, 19]. HPK1/MAP4K1 is involved in cancer cell transformation and invasion [20-22]. HGK/MAP4K4 controls cancer cell mobility [23, 24], and its expression is correlated with worse prognosis in patients with pancreatic ductal adenocarcinoma [25]. GLK can promote cell growth via activating the mTOR signaling pathway after amino acid treatment in epithelial cell lines. GLK positively regulates NF-κB signaling, leading to the development of autoimmune diseases [10-12, 26]. Activation of the NF-κB signaling pathway is involved in carcinogenesis and in cancer resistance to chemotherapy or radiation therapy [27, 28]. Thus, we studied whether GLK is involved in cancer progression using NSCLC samples. Our first objective was to examine whether GLK protein levels correlate with any clinicopathologic parameters. The second goal was to determine whether GLK protein levels correlate with cancer recurrence in NSCLC patients. The third goal was to study whether GLK protein levels are associated with the recurrence-free period/survival in NSCLC patients (Supplementary Figure S1). 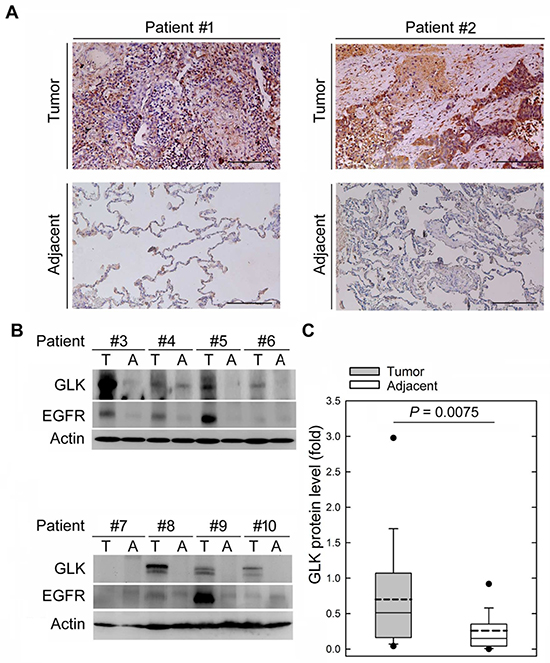 Figure 1: GLK proteins are overexpressed in lung-tumor tissues in NSCLC patients. A. Immunohistochemical examination of GLK proteins in the NSCLC tissues and the tumor-adjacent tissues from two representative patients. Anti-GLK #1 antibody was used. B. Immunoblotting of GLK, EGFR, and actin levels in the NSCLC tissues (T) and the tumor-adjacent tissues (A) from eight representative NSCLC patients. Anti-GLK #1 antibody was used. C. Densitometry analyses of the immunoblotting data from 58 human patients with NSCLC. Relative fold changes were normalized to actin. Means ± SD. P = 0.0075 (Student’s t-test).

Previous studies have shown that the EGFR protein is overexpressed in many NSCLC patients [3, 29]. The EGFR protein levels in NSCLC patients were also calculated (EGFRR = EGFRTumor/ EGFRAdjacent). As expected, we found that EGFR protein levels were higher in tumor tissues (1.04 ± 1.38 to 0.32 ± 0.56, P = 0.0003; Figure 1A and Supplementary Figure S4). Notably, Pearson correlation coefficient analysis showed that EGFRR values were not correlated with GLKR values (r = 0.04005, P = 0.7653), suggesting that GLK overexpression is independent of EGFR upregulation in NSCLC tissues. Next, we studied whether EGFR upregulation is also correlated with NSCLC recurrence. Patients were divided into EGFR-High (> 1.07-fold) and EGFR-Low (≤ 1.07-fold) groups according to the ROC cutoff value (1.07). We found that EGFR-High was not associated with NSCLC recurrence (P = 0.74; Supplementary Table S2). Taken together, the results suggest that GLK overexpression, but not EGFR overexpression, is a putative prognostic biomarker for NSCLC recurrence.

NA: due to the small sample size

NA: due to the small sample size 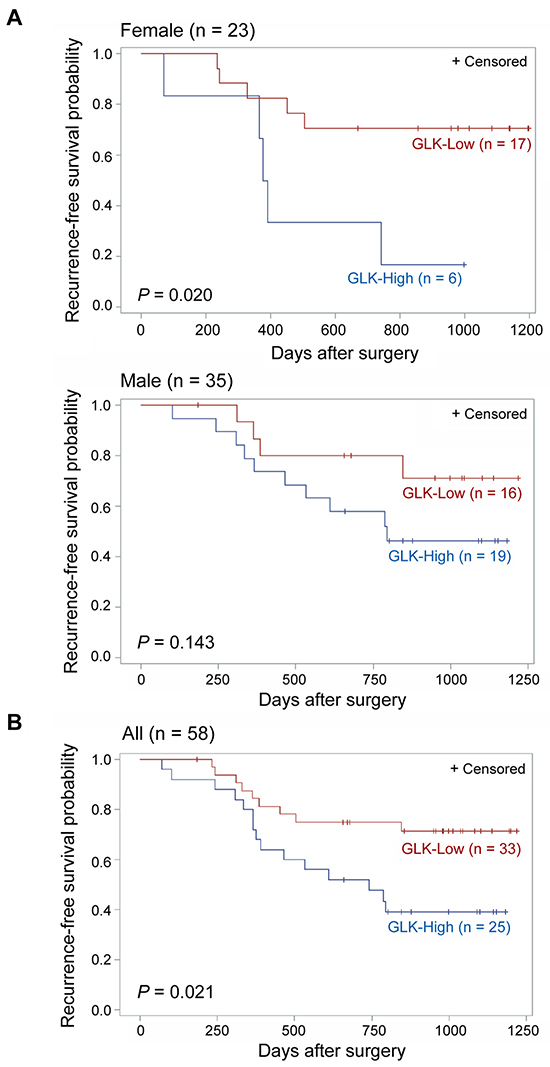 Figure 2: Kaplan-Meier estimates of recurrence-free survival according to GLK protein levels (GLK-High versus GLK-Low) of NSCLCs. A. Grouping by gender. Females (n = 23; upper panel) and males (n = 35; lower panel). B. All NSCLC patients (n = 58). P values were obtained with the use of a log-rank test. Tick marks indicate patients whose data were censored by the time of most recent follow-up.

NSCLC is an aggressive cancer with poor survival for patients; therefore, it is essential to find the diagnostic and even prognostic biomarkers for more effective cancer diagnosis and treatment. Here we demonstrate that GLK overexpression occurred in NSCLC tissues and was independent of tumor stages. GLK overexpression was significantly correlated with high recurrence risks and poor recurrence-free survival rates. Moreover, the associations of the recurrence risks or the recurrence-free survival rates with GLK protein levels were equivalent to or higher than those with the pathologic stages of NSCLC patients. The association between the pathologic stages and the recurrence risks may be underestimated due to the small sample size of late-stage (only 24% for stage III, none for stage IV) patients. Our findings suggest that the GLK protein is a useful prognostic biomarker for NSCLC recurrence of early-stage (stage I/II) patients at the time of surgical resection.

NSCLC accounts for 85% of lung cancers, and 40%–60% of NSCLC patients die of cancer recurrence after a cancer resection. Here we show that GLK proteins are overexpressed in pulmonary tissues from NSCLC patients. Elevated GLK/MAP4K3 protein levels are correlated with increased recurrence risks and poor recurrence-free survival rates in stage I to stage III NSCLC patients. In summary, GLK may be involved in tumor progression of NSCLC. GLK protein levels serve as a prognostic biomarker for cancer recurrence and have prognostic value for recurrence-free survival. Downregulation of GLK proteins may facilitate the development of novel targeted therapies for NSCLC. Further investigations are required to confirm and expand our finding. In addition, GLK mRNA levels were not increased in pulmonary tissues of 60 NSCLC patients from searching the USA NCBI GEO (Gene Expression Omnibus) database. The enhancement of GLK protein levels in NSCLC tissues may be due to translational or post-translational regulation. Thus, the regulatory mechanisms of GLK overexpression or GLK-mediated tumor progression remain to be investigated in the future.

We collected primary lung tumor specimens from 58 previously untreated NSCLC patients who underwent pulmonary resection in the Division of Thoracic Surgery at Taichung Veterans General Hospital, Taiwan, between November 2009 and November 2012. All specimens, including NSCLC tissues (T, n = 58) and paired tumor-adjacent tissues (A, n = 58), from stage I to stage III NSCLC patients were taken at the time of surgical resection. Tumor types and stages of individual specimens were determined according to the American Joint Committee on Cancer Cancer Staging Manual. Portions of samples were either kept at -80°C until processed for immunoblotting analysis or freshly fixed with formaldehyde and then embedded with paraffin. All experiments were performed in accordance with the guidelines and protocols approved by the Institutional Review Board, Taichung Veterans General Hospital, Taiwan. Every patient provided written informed consent approved by the hospital’s Institutional Review Board (approval number: CF13082). Clinical parameters and cancer recurrence data were collected from chart reviews and confirmed by thoracic surgeons.

Anti-GLK #1 and #2 antibodies were generated by immunization of rabbits with individual peptides [10]. The specificity of anti-GLK antibodies for Immunoblotting has been demonstrated previously [18]. Anti-EGFR antibody was from Cell Signaling Technology. The rest of the chemicals were purchased from Sigma-Aldrich.

The tissue sections were deparaffinized, and then treated for antigen retrieval by incubating the slides in boiling buffer (pH 6.0) at 85°C for 10 min. Nonspecific binding was blocked with 3% H2O2 for 10 min. Then they were blocked with Immunoblock-Ultra V block for 5 min and reacted with anti-GLK #1 or #2 antibodies (1:500) at 4°C overnight. The subsequent steps were carried out using Ultravision Quanto Detection System (Thermo, TL-060-QHL). For negative controls, the primary antibody was replaced with 2% normal serum. Sections were counterstained with Mayer’s hematoxylin, and blinded scoring was independently carried out by two individuals according to the intensity (0, not present; 1, minimal; 2, moderate; 3, strong) of GLK expression.

The associations between clinicopathologic parameters (such as age, gender, smoking status, tumor type, and the pathologic stage) and GLK protein levels were evaluated using the Fisher’s exact test. Univariate logistic regression analysis was performed to identify the potential risk factors related to the presence or absence of cancer recurrence. Hazard ratios and corresponding 95% confidence intervals (CI) of recurrence-free periods were calculated using univariate Cox proportional hazards regression model. Variables with P-values less than 0.1 in the univariate analysis and those variables of interest were considered to be potentially associated with cancer recurrence / recurrence-free survival [32]. These potential risk factors (variables) were further explored through multivariate analyses. Kaplan-Meier survival analyses were performed to compare the difference in recurrence-free survival between subgroups (e.g., GLK-High versus GLK-Low, pathologic stages I + II versus pathologic stage III). The log-rank test was used to compare the significance of the survival distributions among two groups. Data were calculated by SAS software, version 9.1 (SAS Institute, Inc., Cary, NC, USA). Two-sided P-values less than 0.05 were considered statistically significant. Statistical analyses were performed by a statistician.