CNR2 is highly expressed in most immune cells [8, 9]. Different studies suggest a potential role of CNR2 in immune system. CNR2 knock out mice showed significantly less memory B-cells, CD4+ and CD8+ T-cells compared to heterozygous mice [10]. In addition to immune cells, CNR2 has also been shown to be expressed in breast cancer tissues and cell lines [6]. CNR2 specific agonists (JWH-015 and JWH-133) inhibit growth through different mechanism including inhibition of CXCL12/CXCR4 axis, cyclo-oxygenase-2 (COX-2) expression and induction of apoptosis in different cancer types [1, 5, 6]. Although there is a strong evidence of the anti-tumorogenic properties of CNR2 agonists, not much is known about the role of CNR2 activation on different growth factor receptor, such as epidermal growth factor receptor (EGFR) and insulin-like growth factor 1 receptor (IGF-IR)-mediated tumorigenic events in breast cancer. 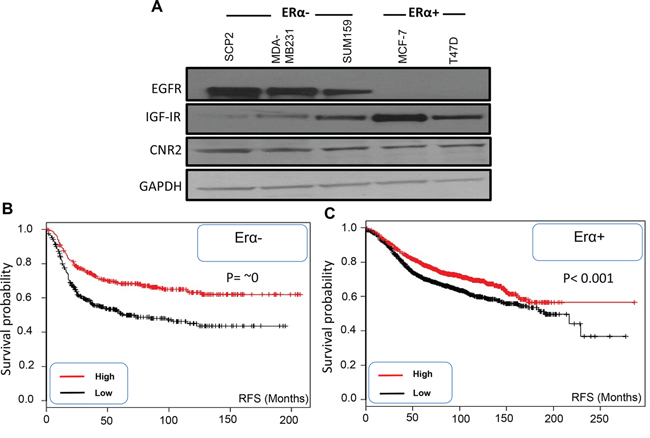 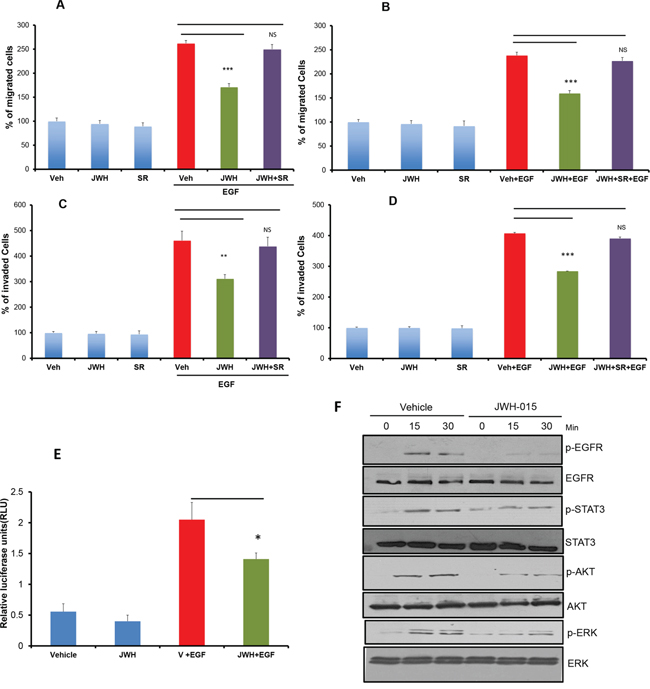 These results indicate that CNR2 triggering has the ability to inhibit EGFR activation and its downstream targets and therefore suppresses EGF-induced tumorigenic events in ERα- breast cancer cells.

ERα- breast cancer cells are also associated with hyperactivation of IGF-IR [22]. IGF-IR activation and phosphorylation is associated with poor prognosis in many breast cancer subtypes including ERα+ and ERα- subtypes [27]. We have shown that ERα- breast cancer cells also express IGF-IR (Figure 1A). Therefore, we investigated the role of JWH-015 on IGF-I-induced tumorigenic events in SUM159 and MDA-MB231 cells (ERα-). We found that JWH-015 significantly inhibits IGF-I-induced migration as well as invasion of SUM159 and MDA-MB231 cells (Figure 3A:3D). At the molecular level, we found that JWH-015 inhibits IGF-I-induced activation of IGF-IR and its downstream target AKT in SUM159 cells (Figure 3E and Supp. Figure 2A-2B). We also found that JWH-015 inhibits secretion of metalloproteinase-2 (MMP2) in SUM-159 cells (Supp. Figure 4). To confirm the specificity of JWH-015 towards CNR2 in these studies, we used a CNR2-specific antagonist (SR144528), and we found that CNR2 blocking has significantly abrogated JWH-015 potential in inhibition of migration and invasion induced by IGF-I in SUM159 and MDA-MB231 cells (Figure 3A:3D). These results indicate that CNR2 activation has the ability to inhibit IGF-IR activation and its downstream key molecule (AKT), which might explain the inhibitory effect of JWH-015 on IGF-I-induced migration and invasion in ERα- cells. 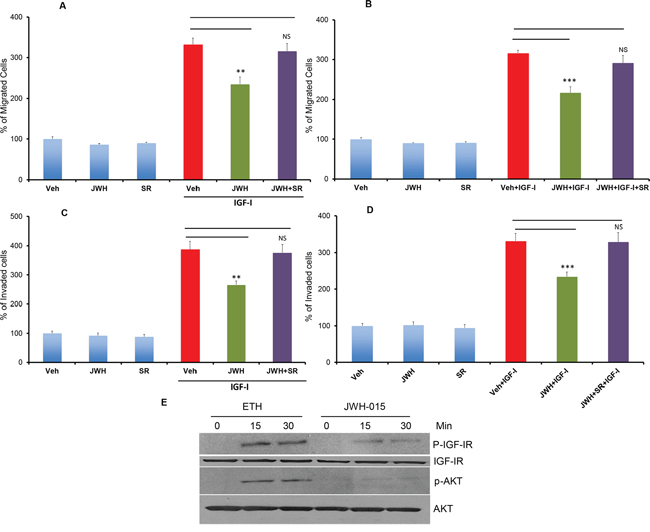 Therefore, in this study, we analyzed the role of CNR2 activation on IGF-I-induced tumorigenic events in ERα+ breast cancer cells. In MCF-7 cells (ERα+), we found that JWH-015 significantly inhibits IGF-I-induced migration and invasion (Figure 4A-4B). We subsequently analyzed the molecular mechanism through investigation CNR2 agonist’s effect on IGF-I/IGF-IR pathway. As shown, JWH-015 inhibits the activation of IGF-IR and its downstream target AKT (Figure 4D and Supp. Figure 2C-2D). To investigate the role of CNR2 activation on IGF-I-induced secretion of metalloproteinases, we used zymogram technique. Interestingly, we found that JWH-015 inhibits IGF-I-induced secretion of metalloproteinase-9 (MMP9) in MCF-7 cells (Figure 4C). To confirm the specificity of JWH-015 towards CNR2 in these studies, we used a CNR2-specific antagonist (SR144528), and we found that CNR2 blocking has significantly abrogated JWH-015-potential in inhibition of migration and invasion induced by IGF-I in MCF-7 and SUM159 cells (Figure 4A-4B). 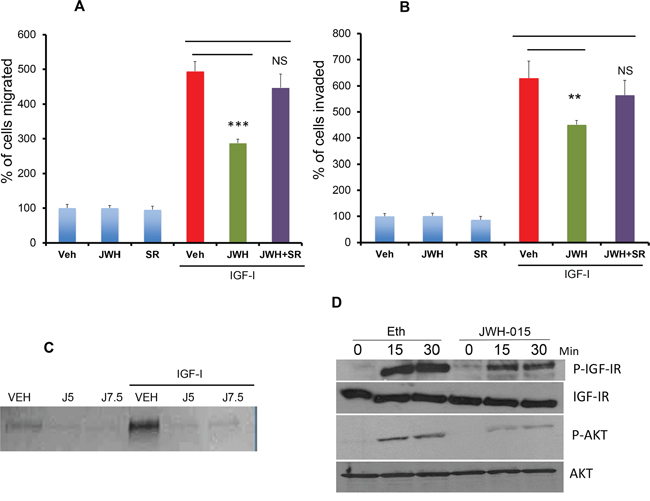 These results indicate that CNR2 activation has the ability to inhibit IGF-IR activation and its downstream target. It also inhibits IGF-I-induced secretion of MMP9, which might explain the inhibitory effect of JWH-015 on IGF-I- induced migration and invasion in ERα+ cells. 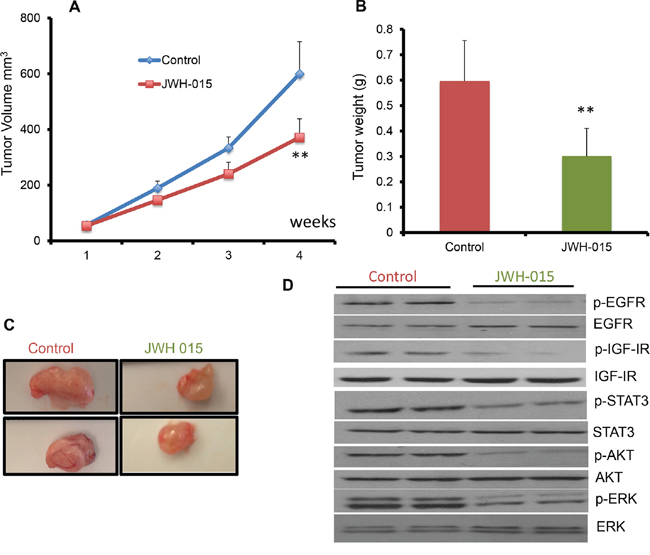 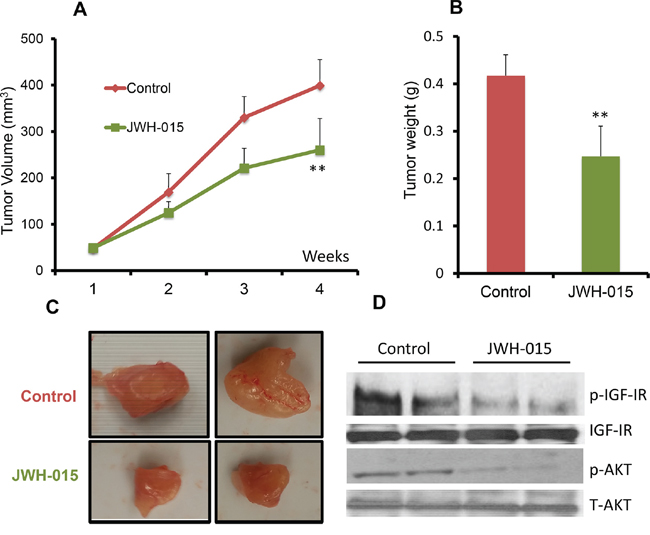 Since EGFR is upregulated in ERα- breast cancer subtype, EGFR inhibitors have been used as a possible therapeutic option. However, EGFR inhibitors usually gain rapid resistance and they eventually fail [38]. Therefore, it is crucial to identify other small molecules that can achieve the interruption of EGF/EGFR axis by different, possibly indirect, ways. In our present study, we showed that CNR2 activation by CNR2 specific agonist (JWH-015) inhibits EGF/EGFR signaling transduction pathway’s activation in ERα- cells in vitro and in vivo. This pathway involves important key molecules STAT3, AKT and ERK and NF-kB, which are important in cancer cell survival, proliferation, migration and invasion. These results explain the ability of JWH-015 to inhibit EGF-induced migration and invasion as well as inhibition of phosphorylation of EGFR, AKT and ERK proteins in ERα- cells in vitro and in vivo. In our study, we found that JWH-015 also inhibited EGF-induced NF-kB activation in ERα- breast cancer cells. NF-kB is highly active in ERα- breast cancer cells and it enhances breast cancer cell’s migration, invasion and metastasis through different mechanisms [39]. It promotes the expression of several pro-tumorigenic genes such as CXCR4, which is crucial for cancer cell migration and invasion [30, 40]. Furthermore, NF-kB activation is important for epithelial to mesenchymal transition (EMT) process [41]. Our studies are in accordance with previous studies, which showed that CNR2 agonists inhibit the tumor growth and metastasis through induction of apoptosis and inhibition of EGFR activation in non-small cell lung cancer (NSCLC) [5]. Our findings might explain the observation, which shows that higher CNR2 expression is significantly correlated with better prognosis in ERα- patients.

A common problem for ERα+ breast cancer is the resistance to the anti-estrogen therapy [42, 43]. After gaining resistance to the estrogen deprivation, ERα+ cells show upregulation and activation of IGF-I/IGF-IR and PI3K/AKT signaling [44]. Furthermore, IGF-IR inhibitors also gain rapid resistance [45, 46]. It is urgently needed to find other options for targeting IGF-I/IGF-IR in ERα+ and ERα- cells rather than conventional direct therapies. Therefore, we studied the effect of CNR2 agonist on IGF-I-induced tumorigenic events. Our results showed that JWH-015 inhibits phosphorylation and activation of IGF-IR and its downstream target AKT in vitro and in vivo. This might explain its ability to inhibit IGF-I-induced migration in ERα+ and ERα- cells. The inhibition of IGF-I-induced secretion of MMP-9 by JWH-015 might also explain the ability of CNR2 agonist to inhibit IGF-I-induced invasion in ERα+ cells. These findings might explain our observation that show that higher CNR2 expression is significantly correlated with better prognosis in ERα- as well as ERα+ patients.

In this study, we showed that CNR2 activation inhibits the activation of EGFR and IGF-IR receptor tyrosine kinases (RTKs), however the mechanism by which CNR2 inhibits these RTKs activation is not known. Importantly, Pérez-Gómez et al; have recently reported that CNR2 cross talks with HER-2 through forming a heterodimer. In addition, CNR2 has been shown to cross talks with other G-protein coupled receptors (GPCR) such as CXCR4 through forming heterodimers and thereby inhibiting its activity [5, 47]. Therefore, there is possibility of similar direct interaction between CNR2 with EGFR and IGF-IR. There is also a probability that the cross-talk between CNR2 and these RTKs occurs through indirect way. Previous studies showed that MMP inhibitor inhibits EGFR ligand shedding and secretion that resulted in less activation of EGFR [48]. Since we have shown that JWH-015 inhibits MMP secretion, this may lead to less shedding and secretion of EGFR ligands and eventually less activation of EGFR and its downstream signaling. 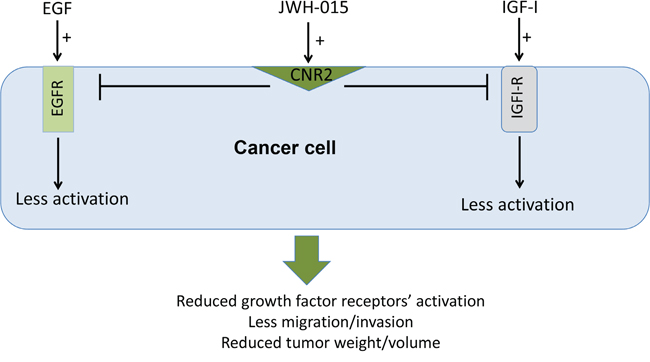 Cells were plated in 100 cm2 dishes and lysed in lysis buffer (RIPA). Tumor samples were homogenized and lysed in RIPA buffer for further analysis. 50 mg of proteins were loaded on 4–12% SDS–polyacrylamide gels (Invitrogen) then transferred to nitrocellulose membranes (BioRad) and blocked with 5% milk. Membranes were incubated overnight with primary antibody, washed, and incubated for 1 h at RT with horseradish peroxidase conjugated secondary antibody. The membranes were then washed and stained using a chemiluminescence system (ECL Amersham Biosciences) and exposed to X-ray film (Kodak).

Chemotactic assays were performed using transwell chambers (Costar 8.0 mm pore size) as described previously [5, 6, 50]. Briefly, serum starved cells were pretreated with JWH-015 or vehicle for 24 h. Top chambers were loaded with cells in serum free medium (SFM) and bottom chambers contained SFM in the presence or absence of chemo-attractants. Cells that migrated or invaded across the membrane were counted by fixing in 37% formaldehyde and 25% glutaraldehyde in PBS and stained with 0.1% crystal violet in PBS for 30 minutes. Migrated/invaded cells per membrane were detected by light microscopy, counted in 5 fields and the percentage of migration determined.

We used NF-kB luciferase reporter assay (Promega) to determine NF-kB activity as described previously [50, 51]. Briefly, NF-kB luciferase constructs containing either wild type or NF-kB vector were transfected in the pretreated cells using lipofectamine 2000 (Invitrogen). For internal control, we co-transfected cells with Renilla luciferase vector. 24 h after transfection, EGF (100 ng/ml) was added and then incubated for another 24 h. Cells were lysed and luciferase assay was performed according to manufacturer’s protocol.

Female nude (NU/NU) mice were purchased from (Charles River Laboratories Inc.). Tumors were formed by orthotopically injecting SUM159 (5 x 106) cells or MCF-7 (5 x 106) in the 4th mammary glands of female nude mice (n=6 mice per group). Mice were randomized when tumors became palpable, and then injected peri-tumorally with JWH-015 (10 mg/kg) or vehicle on alternate days for 4 weeks. Mice with MCF7 cell were subcutaneously injected once a week with 2.5 μg β-estradiol 17-valerate in 50 μL of sesame oil. Tumors were measured every week with external calipers and tumor volume was calculated according to the formula tumor volume = (length x width2 x 0.52) [1, 52]. The mice did not experience any undesirable effects following administration of vehicle or JWH-015 during the whole period of the experiment.

This study has been funded in part by NIH (CA109527 and CA153490), and Pelotonia Idea Grant to RKG. Mohamad Elbaz is supported by fellowship from Egyptian government.

2. Pertwee R. The pharmacology of cannabinoid receptors and their ligands: an overview. International journal of obesity. 2006; 30:S13-S18.