Between January 2009 and August 2012, 48 patients with penile cancer at our center underwent FDG-PET/CT after CT (n=39) or magnetic resonance imaging (MRI; n=9). The accuracy of FDG-PET/CT was assessed with both organ-based and patient-based analyses. FDG-PET/CT findings were validated by either biopsy or serial CT/MRI. Clinician questionnaires performed before and after FDG-PET/CT evaluated whether the scan results affected management.

One hundred fifteen individual lesions were evaluable in 42 patients for the organ-based analysis. Overall sensitivity was 85% and specificity was 86%. In the patient-based analysis, overall sensitivity and specificity were 82% and 93%, respectively. Pre- and post-PET surveys showed that FDG-PET/CT detected more malignant diseases than CT/MRI in 33% patients. Planned treatments were changed in 57% patients after FDG-PET/CT scan.

FDG-PET/CT has good sensitivity and specificity in the detection of metastatic penile cancer. It provides more diagnostic information to enhance clinical management than CT/MRI.

Squamous cell carcinoma of the penis is uncommon in developed countries, but its incidence in some developing countries is much higher [1, 2]. The scarcity of this disease has limited the conduct of prospective studies evaluating the diagnosis, staging, treatment and follow-up.

Metastatic involvement of regional lymph nodes or distant organs is a strong prognostic factor for this disease and is associated with decreased survival [3]. The non-invasive imaging methods play important roles in this process. Fluorine-18 2-fluoro-2-deoxy-D-glucose (FDG) positron emission tomography (PET)/CT provides anatomic and metabolic information for staging and restaging, and has been incorporated into the management of a variety of malignancies [4]. The use of FDG-PET/CT in patients with penile cancer may also help to characterize lesions that are uncertain by CT and/or MRI. The role of PET imaging in penile cancer has not been adequately explored. One reason might be the urinary excretion of FDG interferes with visualization of the primary penile cancer and regional lymph nodes [5]. However, evaluation for metastatic lesions including local lymph nodes can be helpful in staging, treatment planning, and assessment of overall prognosis [6]. This study aims to explore the accuracy of PET/CT in detecting metastases using both patient-based and organ-based analysis and to identify the degree to which PET/CT results affect clinical managements in patients with penile cancer.

Patients eligible for this study were prospectively registered in the PET Registry for Rare Cancer at Shanghai Cancer Center between January 2009 and August 2012. All patients had initial anatomic imaging with either CT or MRI followed by FDG-PET/CT.

18F-FDG was produced automatically by a cyclotron (RDS Eclips ST; Siemens) and an Explora FDG4 module (Siemens) in our center. All patients were required to fast for at least 6 h to ensure glucose blood levels below 10 mmol/L. Scanning was initiated 1 h after administration of the tracer (7.4 MBq/kg). The data acquisition procedure was as follows: CT was first performed, from the proximal thighs to head, with 120 kV, CARE Dose 4-dimensional mode, 80-250 mA, and a pitch of 3.6. Immediately after CT, a PET emission scan that covered the identical transverse field of view was obtained. The acquisition time was 2-3 min per table position. PET image datasets were reconstructed iteratively by application of the CT data for attenuation correction, and coregistered images were displayed on a workstation.

The first goal was to investigate the sensitivity and specificity of FDG-PET/CT in identifying metastatic lesions in patients with penile cancer. Lesions recorded in FDG-PET/CT reports were catalogued and assessed further using histopathology from biopsies or serial subsequent imaging studies as the standard of reference. Biopsies were obtained at the discretion of the referring oncologist. Two types of correlations were performed: an organ-based analysis and a patient-based analysis. All FDG-PET/CT findings were classified as true positive, true negative, or false negative in both the organ-specific lesion analysis and the patient-based analysis. Two experienced physicians from nuclear medicine department independently evaluated the data to determine the status of lesions. If there was any discrepancy, a third physician will help determine the status of lesions.

The questionnaires on intended patient management, completed by urologic oncologists in our center, were collected before and after FDG-PET/CT to determine how the findings affected patient management as the previous studies [7]. The pre-FDG-PET/CT survey collected information regarding the indication for the scan and the clinician’s management plan if it was not available. The post-FDG-PET/CT survey collected information on the clinician’s planned management with the available scan results and whether the PET/CT intervention avoided further testing. The managements included observation, additional imaging, tissue biopsy or needle inspiration, surgical treatment with curative intent, chemotherapy treatment with curative intent, chemotherapy with palliative intent, radiation therapy, and supportive care. The data were collected prospectively with the consent of the patients. The physician’s answers on the surveys were confirmed by medical chart review.

Forty-eight patients with penile cancer were included in this study (Table 1). And forty-two of these patients were evaluable for analysis. Six patients did not have further imaging studies after the FDG-PET/CT and were excluded. The patient population involved distant metastases (44%) and the remaining patients had groin/deep inguinal or pelvic lymph node metastases. The reasons for FDG-PET/CT are initial staging in 35%, restaging or suspected recurrence in 65% of patients. Forty percent patients had received prior chemotherapy, and 10% received radiation therapy. Eighty-six percent of the findings considered suspicious for cancer on FDG-PET/CT had an SUV≥2.5. For the other 15% lesions with SUV less than 2.5, the radiologist categorized those as suspicious malignancy.

Organ-based analysis was performed on 115 lesions in the 42 evaluable patients (Table 2). The predominant site of disease was lymph node (47%), followed by lung (22%) and other organs. For the organ-based analysis, the overall FDG-PET/CT sensitivity was 85%, and specificity was 86%. 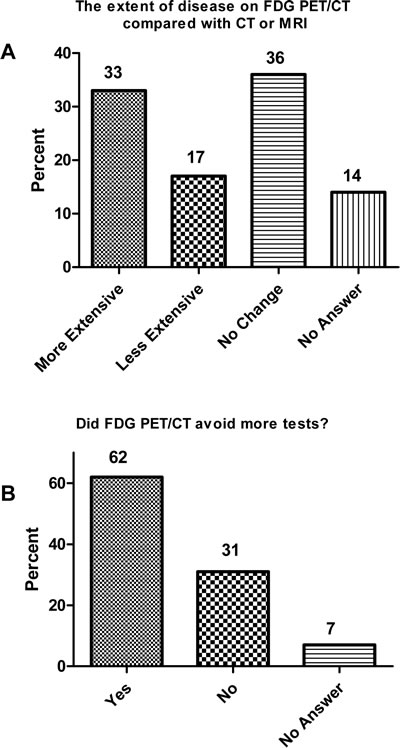 The survey also showed that treatment change occurred in 57% of the patients (Table 4). It was reported that additional imaging was avoided after PET/CT scan, and the need for biopsy was negated in 16% of the patients. In patients planned for locoregional treatment, 18% were found to have distant metastases after PET/CT and thus changed to systemic chemotherapy. Altogether, 57% patients had their treatment changed based on the results of PET/CT (Table 4). The change of treatment caused by PET/CT was confirmed by medical chart review.

Including patients for whom the plan before PET/CT was another type of imaging (eg, CT or MRI) may have overestimated the impact of PET/CT on the patient management change. As previously, an image-adjusted impact was performed and 7 patients were excluded. The management change based on PET/CT results was 41% of the patients.

In our study, FDG-PET/CT showed excellent sensitivity and specificity in the detection of metastases in patients with advanced penile cancer. The majority of patients in this study were undergoing restaging or evaluation for suspected recurrence, a clinical scenario that was suitable for the use of FDG-PET/CT since the likelihood of metastases for this group of patients would be high. The sensitivity and specificity of FDG-PET/CT in this disease were similar to those in other epithelial malignancies [8, 9]. This study did not include the patients with superficial disease alone. Prior studies do not support routine PET/CT in this setting since metastatic involvement of regional lymph nodes or distant sites is rare in superficial diseases [10-12].

The presence and extent of regional lymph and distant metastases are among the most decisive prognostic factors in penile cancer. For a group of locally advanced penile cancer, a recent phase II trial has demonstrated that the neoadjuvant chemotherapy could elicit a clinically meaningful response of 50%. Overall survival was also significantly associated with chemotherapy responsiveness. Thus, a standard neoadjuvant medical intervention for this group of patients has been established13. Our results here showed that the results of PET/CT could be useful for staging and evaluation of the patients before the decision of treatment management.

Previously, there were several studies which explored the role of PET/CT in penile cancer patients [10-12, 14, 15]. These studies were performed mainly in small sample size or retrospectively with wide variability in sensitivity and specificity. A recent pooled-analysis has shown that PET/CT has low sensitivity in cN0 patients for detection of regional lymph node involvement in penile cancer patients. However, patients with clinically palpable lymph node may benefit from PET/CT since the sensitivity in this subgroup of patients is high [16]. The results of our study are concordant here.

Another feature in this study is the questionnaire used to determine the assessment of clinical utility for PET/CT. 57% patients were deemed by treating physicians to have derived benefit from FDG-PET/CT. 7 biopsies were avoided. Although pathologic confirmation remains the gold standard, biopsy is not always possible because of the risk with lesions deep in the pelvis near vascular structures, or patient refusal. In these instances, FDG-PET/CT may serve as a useful substitute to assess the suspected site for the treatment choice. The use of PET/CT could possibly avoid further testing, unnecessary invasive procedures, or inadequate therapy, as has been demonstrated in other malignancies.

There are some limitations in our study. Selection bias may have occurred since only patients with likelihood for recurrent/metastatic disease were referred for a PET/CT scan. Only when there is clinical suspicion of abnormality on standard cross-sectional imaging such as CT or MRI, PET/CT can be ordered. The limited number of patients in this study might be a concern. However, to our knowledge, this is the largest study so far assessing the role of PET/CT in penile cancer for this rare disease.

In summary, this study demonstrated that FDG-PET/CT could be useful in the detection of metastases for patients with advanced penile cancer. It may provide better clinical information for the plan or change of treatment management.

We gratefully thank the staff members in the Department of Medical Oncology and urology center at Fudan University Cancer Center for their suggestions and help. We also thank Dr Chao Ma from nuclear department for the assistance.