Osteosarcoma (OS) is a common primary malignant bone tumor with high morbidity and mortality in children and young adults. How to improve poor prognosis of OS due to resistance to chemotherapy remains a challenge. Recently, growing findings show activation of mammalian target of rapamycin (mTOR), is associated with OS cell growth, proliferation, metastasis. Targeting mTOR may be a promising therapeutic approach for treating OS. This review summarizes the roles of mTOR pathway in OS and present research status of mTOR inhibitors in the context of OS. In addition, we have attempted to discuss how to design a better treatment project for OS by combining mTOR inhibitor with other drugs.

Osteosarcoma (OS) is the most common primary bone malignant neoplasm in children and young adults which is featured with high local aggressiveness and distant organic metastasize [1]. Despite great advances in treatments, comprising neoadjuvant chemotherapy and surgical technology, a notable number of relapse or metastasis still occur [2, 3]. The cure rate of OS is approximately 25 % when accompanied with metastasis at the time of diagnosis, which remains almost stagnant over the past 20 years [4, 5]. Thus, novel chemotherapy drugs are urgently needed.

In this review, the role of mTOR pathway and present inhibitors targeting on mTOR in OS are summarized. In addition, we also discuss the strategy reversing resistance to chemotherapeutics for OS patients.

Overview of the mTOR pathway

mTOR is a serine/threonine kinase, which acts as a central controller in regulating important cellular functions [6]. It exists in two multiprotein complexes, mTOR complex 1(mTORC1) and mTOR complex 2(mTORC2). mTORC1 consists of mTOR, regulatory associated protein of mTOR (Raptor), mLST8(mammalian lethal with SEC13 protein 8)/G-protein β-subunit like protein (GβL), RAS40 and Deptor [10]. While mTORC2 is composed of rapamycin-insensitive companion of mTOR (Rictor), mTOR, mLST8/GβL, proline-rich repeat protein-5 (PRR-5)/protein observed with Rictor-1 (Protor-1), stress-activated-protein-kinase-interacting protein 1 (Sin1), and Deptor [11]. Despite both mTORC1 and mTORC2 can be restrained by rapamycin, mTORC1 seem to be relatively sensitive to it [12].

The main upstream signals of mTORC1 are adenosine 5’-monophosphate (AMP)-activated protein kinase (AMPK) and PI3K pathway [13, 14]. PI3Ks constitute a lipid kinase family. Once activated, its catalytic subunit activates AKT. Subsequently mTORC1 is activated. Another upstream effector, AMPK, is a key energy sensor [15], which can regulate cellular metabolism. Activation of AMPK by nutrient deprivation promotes mTORC1 inactivation. The downstream mediators of mTORC1 include ribosomal S6 protein kinase 1 (S6K1) and eIF4E-binding protein 1 (4E-BP1), cyclin dependent kinases (CDKs) and the hypoxia-inducible factor 1α (HIF1α), which promote the expression of a wide range of glycolytic genes [16]. Thus, in the nutrient rich environment, mTORC1 is stimulated and promotes protein synthesis, cellular growth as well as the inhibition of autophagy, a saving program to survive starvation [17].

Compared with mTORC1, the upstream pathways of mTORC2 are less known. PI3K is regarded as a direct upstream effector of mTORC2 [18], while AKT is the main target. Stimulation of AKT by mTORC2 activates mTORC1, thus forming a positive feedback to enhance the signal (Figure 1). Besides, mTORC2 is related to insulin sensitivity and cytoskeletal reorganization [19, 20]. 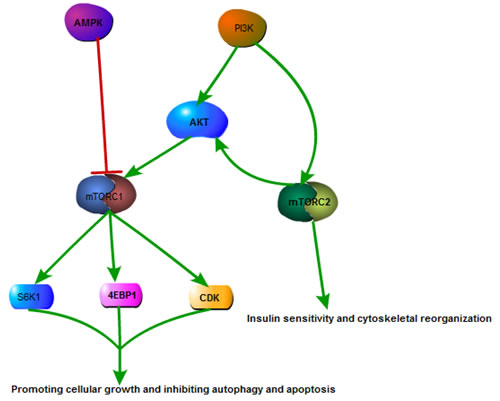 Roles of the mTOR pathway in OS

Distant organic metastasize remains the predominant lethal for cancer patients. Thus, how to prevent metastas presents a great challenge. It has been proved that mTOR has potential function on facilitating metastasis. Notablely, rapamycin reduces tumor cell metastasis in a murine model of osteosarcoma via blocking the mTOR/S6K1/4E-BP1 pathway [33, 34]. Metformin exerts markedly anti-metastatic potentials by downregulating matrix metalloproteinases, which have an ability of degrading extracellular matrix to facilitate tumor cell metastasis [25, 35-36]. In addition, the histone deacetylase inhibitor and P53 can also downregulate mTOR to restrain metastasis [26, 37]. Another pathway by which activation of mTOR pathway promotes OS cell metastasis is angiogenesis. P53 and phosphorus-containing sirolimus suppresses OS cell angiogenesis through inhibition of mTOR [26, 30]. Thus, inhibition of mTOR may be a novel effective candidate therapeutic strategy against OS cell metastasis.

Apoptosis is refered to a process of programmed cell death which occurs in multicellular organisms [38, 39]. Chemotherapy kills cancer cell mainly by inducing apoptosis. Therefore, developing an effective proapoptotic drug seemed to be a good therapeutic candidate for OS. Interestingly, many findings demonstrate that inhibition of mTOR pathway can induce apoptosis of OS cell [26, 27, 29, 31, 40-44]. At the same time, β-Elemene, isolated from herbs and plants, upregulates HIF-1αprotein via PI3K/Akt/mTor signaling pathway, contributing to inhibition of apoptosis [45]. Moreover, overexpression of miR-101 can suppress the expression of mTOR, inducing the apoptosis of OS cell [31]. Therefore, drug suppressing mTOR pathway has pro-apoptotic effect, which may be a useful therapeutic option for OS.

Autophagy is a cellular physiological process which delivers cytoplasmic material to the lysosome to provide energy and nutrients [46, 47]. It occurs as a strategic survival mechanism that reuses energy and nutrients under special conditions [48, 49]. Thus, autophagy is regarded as an emergency pathway of protecting cells from adverse microenvironment. Surprisedly, autophagy is also detected in OS cell [50]. Inhibition of mTOR in OS cell leads to autophagy which has advantage effect on cell [51-52]. Meanwhile, inhibition of autophagy has a negative impact on osteosarcoma tumors [50]. Therefore, activation of mTOR induces autophagy, which is regared as a prosurvival response contributing to drug resistance. Moreover, treating with autophagy inhibitors may lead OS cell apotosis [53]. Nevertheless, activation of autophagy by rapamycin also leads to OS cell death. This mechanism may be due to the extent of autophagy activation beyond the reversibility of cell viability, contributing to out of control of autophagy process [54-58]. Taken together, the signaling pathways involved in autophagy are still little known. In addition, in view of the mTOR is the mutual upstream controller of apoptosis and autophagy process, breaking the balance between apoptosis and autophagy and shifting to apotosis after activation of mTOR pathway may be a promising strategy for facing the challenges of OS. Further investigations are needed to help us understand completely about the roles of mTOR pathway in OS (Figure 2). 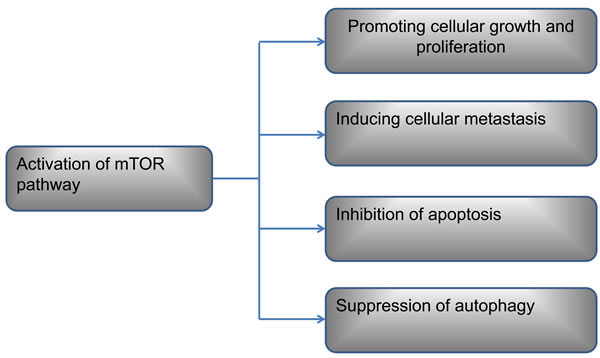 Figure 2: The roles of mTOR pathway in OS cell.

Despite great advances in treating OS, significant improvement in survival rate and survival time is not acquired. The reason is that cancer cell exerts resistance to chemotherapy drug in clinical application, even it shows promising anti-tumor activity in pre-clinical test. Surprisingly, overactivation of mTOR pathway may relate to resistance to chemotherapy drug [59]. Therefore, the combination of chemotherapy drugs and mTOR inhibitors may demonstrate synergistic effects. Consistent with this notion, C6 ceramide can sensitize pemetrexed-induced apoptosis and cytotoxicity via inactivation of AKT-mTOR signaling in OS [59]. Moreover, specil inhibition of mTORC2 but not mTORC1 can promote cisplatin-induced apoptosis [60]. Thus, exploring novel mTOR inhibitors raise great interest treating OS.

Table 1 lists present research status of mTOR in the context of OS.

mTOR inhibitor suppresses OS cell growth solely in vivo and in vitro and phase II study [22, 23, 33, 34, 44, 61-64]. Besides, Some reports find mTOR inhibitor achieves an increasing anti-tumor effect when combining with other forms of drugs, such as anti-osteoporotic drug, extra terminal domain protein inhibitor, conventional chemotherapy drugs [65-71]. In addition, a dual PI3K/mTOR inhibitor shows an promising result in treating OS cell, and this anti-tumor activity can be enhanced by MEK/Erk inhibitors [72, 73].

The roles of autophagy in OS cell survival and death are paradoxical and complex [74] just as we talk above. Notablely, some researchers pay attention to inhibiting both mTOR and antophagy process for treating OS. Heat shock protein 90 (Hsp90), an abundant molecular chaperone, is involved in cell growth, differentiation and survival [75, 76]. Hsp90 inhibitor suppresses mTOR, contributing to autophagy. However, in combination with antophagy inhibitor, hsp90 exerts a much greater extent apoptosis [77]. Another finding also shows that rapamycin induces the apoptosis of OS cells, which is enhanced by antophagy inhibitor [71]. Thus, treating OS cell with mTOR inhibitor alone may inhibit the proliferation and promotion of OS cell by targeting mTOR pathaway. However, as the ability of pro-apoptosis is growing, the escape pathway of autophagy is triggered, counteracting the anti-tumor effect of mTOR inhibitor and contributing resistence to mTOR inhibitor, which is consistent with the modest anti-tumor effect of mTOR inhibitor in clinical application. Autophagy inhibitor can elevate efficiency of mTOR inhibitor by blocking autophagy process in treating OS. Owing to partly understand in the autophagy pathway in OS, further investigations are needed.

Overall, mTOR inhibitor combined with other drugs may provide a novel therapeutic strategy against OS. However, the combination of the anti-insulin-growth factor type 1 receptor antibody and mTOR inhibitor does not show a objective result in an phase II trial [78]. The different conditions of cell living in between pre-clincal test and clinical study and the distrinct type of drug combined with mTOR inhibitor may lead to dissatisfied result. Moreover, nucleolar stress , induced by chemotherapeutic drugs, stimulates p53-dependent signaling pathways which contribute to cell cycle arrest, apoptosis, and mTOR inhibitor can alleviate this p53 response to nucleolar stress [79-85]. The cross-linking of p53-dependent signaling pathways and mTOR pathway may explain this inconsistent result. Thus, we should take the complexity and potential problems into consideration when mTOR inhibitor combined with other cytotoxic compounds is applied in treating OS.

Taken together, the combination of mTOR inhibitor and other drugs may provide an efficient therapeutic strategy against OS. However, the mTOR signaling pathway is complexity in OS, and its roles in OS are still not completely understood. Further studies will help us design a combinatorial chemotherapy regimen against OS.

Table 1: Research status of mTOR in the context of OS

Activation of mTOR pathway promotes OS cell proliferation, metastasis, and inhibits the intracellular processes of apoptosis and autophagy. mTOR inhibitor used alone exerts a promising anti-tumor activity, which is enhenced by combining with other drugs for OS. Thus, exploring a better combinatorial chemotherapy regimen provide a novel therapeutic approach for OS. However, the detail mechanism of mTOR pathway and synergistical effect of mTOR inhibitor and other drugs in OS are still not fully understood. Therefore, future further researches are required to gain a better understanding.

The present study is supported by the National Natural Science Foundation of China (No. 81372180) and thanks for advice from the fellows in Metabolic Syndrome Research Center of Central South University.

21 Gordon IK, Ye F, Kent MS. Evaluation of the mammalian target of rapamycin pathway and the effect of rapamycin on target expression and cellular proliferation in osteosarcoma cells from dogs. Am J Vet Res. 2008; 69:1079-1084.