Hepatitis C virus (HCV) infection presents a serious public health problem worldwide [1]. Studies confirm that majority patients of HCV infection will develop chronic infection, which in turn leads to the occurrence of liver cirrhosis and hepatocellular carcinoma (HCC) [2]. The mechanism accounting for the high rate of persistent infection is that this virus has evolved one or multiple mechanisms to evade the host immunity [3-7]. Thus, the molecular mechanisms by which the virus establishes chronic infection are under intense investigation.

HCV core protein (21kDa), synthesized upon virus infection and replication, takes part in activities of virus life cycle and in assembly of virus particles. It is released from infected liver cells [8] and exhibits multiple functions to affect host immunity [9-13]. Many researchers have found that HCV core protein combining with gC1qR can inhibit the proliferation of T lymphocytes by reducing IL-2 and IL-2Rα gene transcription [14], and impair IL-12 secretion by macrophages through induction of negative regulators such as Tim-3, PD-1 and SOCS-1 [15, 16]. It can also reduce the ability of DC cells to present antigen by down-regulating the MHC-I expression [17].

Liver as the main host for HCV infection is composed of hepatocytes, liver stromal cells, and a variety of immunocytes which include DCs, macrophages, NK cells, NKT, T and B lymphocytes [18]. Macrophages and NK cells in the liver function as the first line of defense against infection similar as those in other organs [19]. Kupffer cells, traditionally denote hepatic resident macrophages, represent up to 15~20% of the total number of liver cells, and 80~90% of the total body macrophage pool [20]. Polarization of macrophages to different subtypes with distinct functions depends on the tissue microenvironment and external stimuli [21]. The previous studies in our team demonstrated that the phosphorylation of transcription factor STAT3 and the expression of membrane CD206 are up-regulated in macrophages co-cultured with HCV core protein and liver cells, which increases macrophage tendency to become M2 type macrophages [22]. M2 macrophages have been implicated in inhibiting inflammatory responses and immuno-suppression [23-26], resulting in adverse effects on HCV elimination. In other words, in the settings of persistent HCV infection, macrophage activities transformed in liver pathological microenvironment may be responsible for developing chronic HCV diseases. Macrophages can devour pathogens, meanwhile release large amounts of cytokines that impact on the strength and types of adaptive immune responses [27]. In addition, activated macrophages can also produce multiple negative regulators [28, 29]. The negative regulators contribute to inhibit further activation of inflammatory signaling pathways, thereby, protect the host from excessive immune responses [30, 31].

In this study, the aims are to explore the negative regulator A20 expression in macrophages induced by HCV core protein and the receptors and pathways involved in A20 induction. A20 (tumor necrosis factor α inducible protein 3, TNFAIP3), which is known as a powerful suppressor in cytokine signaling, can inhibit the activity of NF-κB and NF-κB-mediated inflammatory responses [32-34]. The results indicated that the interaction of HCV core protein with gC1qR could upregulate the expression of A20, which down-regulated the secretion of IL-6, IL-1β and TGF-β1 in macrophages. gC1qR, which is the receptor of the globular heads of complement C1q, is involved in the immune response to the inflammation and microbial infection [35, 36]. HCV core protein/gC1qR engagement on macrophages triggered the activation of MAPK, NF-κB and PI3K/AKT signaling pathways, among which P38, JNK and NF-κB pathways activated the A20 expression. This study reveals that HCV core protein causes a low-grade chronic infection mediated by macrophages which promotes the establishment of chronic HCV infection. 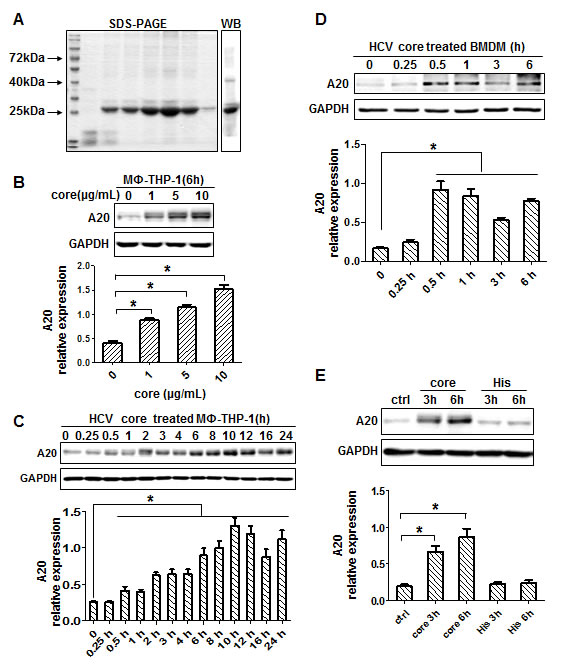 A20 inhibits the production of IL-6, IL-1β and TGF-β1 in macrophages 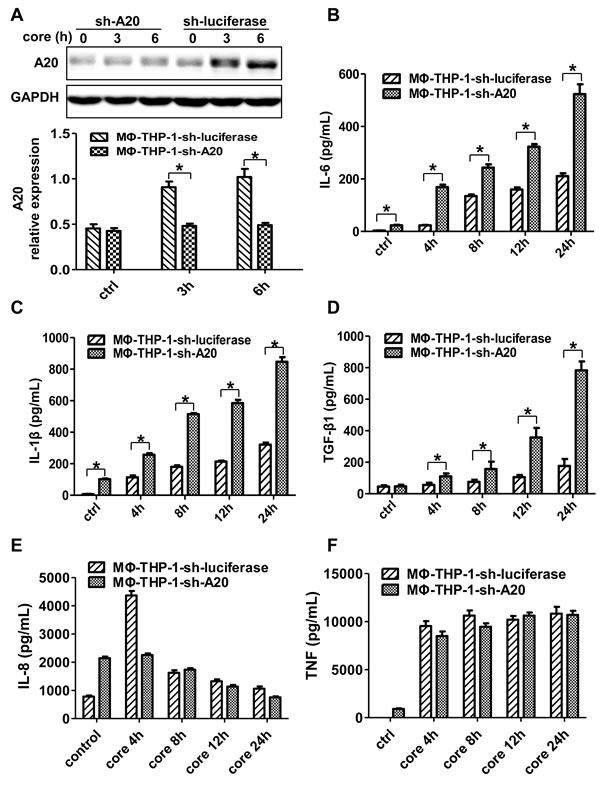 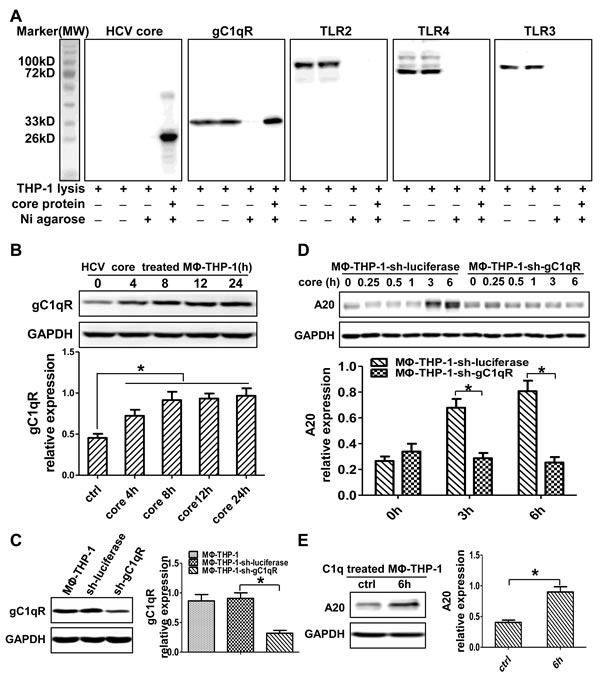 To identify the effect of MAPK pathways on A20 induction, whether HCV core protein could trigger the activation of MAPK pathways is questioned firstly. As shown in Figure 4A and 4B, P38, JNK and ERK were activated in MΦ-THP-1 cells and BMDM treated with HCV core protein (p < 0.05). Then, THP-1-sh-gC1qR cells were treated with HCV core protein, the expression of p-P38 and p-JNK were significantly lower than control cells (MΦ-THP-1-sh-luciferase) (p < 0.05) (Figure 4C). Furthermore, C1q, the ligand of gC1qR, was used to treat MΦ-THP-1 cells, and found that C1q could also activate P38, JNK and ERK pathways (Figure 4D). The results indicated that HCV core protein acted through gC1qR to activate P38, JNK, and ERK signaling pathways. Next, MΦ-THP-1 cells were pretreated with specific inhibitors for P38 (SB203580), JNK (SP600125), ERK (PD98059), respectively, prior to treatment with core protein, and followed by measuring A20. As shown in Figure 4E, A20 was significantly inhibited after blocking P38 and JNK pathways, but not the ERK pathway. These results suggest that P38 and JNK pathways mediate A20 expression induced by HCV core protein in macrophages. 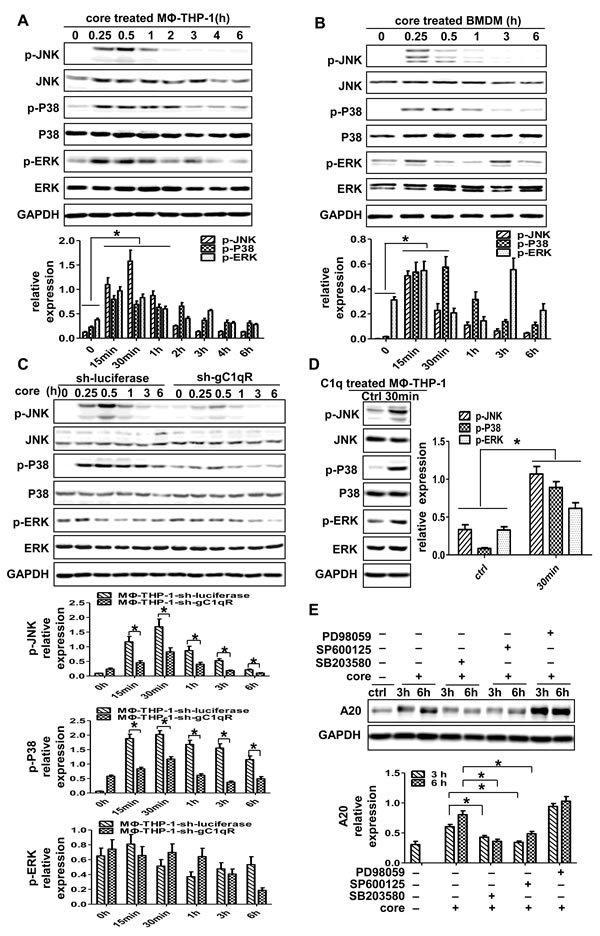 To figure out whether NF-kB involves in A20 induction, we detected the NF-kB p65 and p105 in MΦ-THP-1 and BMDM treated with HCV core protein. As shown in Figure 5A and 5B, p-NF-κB p65 and p-NF-κB p105 were upregulated in macrophages stimulated by core protein (p < 0.05). Furthermore, the expression of p-NF-κB p65 and p105 were measured in THP-1-sh-gC1qR cells treated with HCV core protein, the results showed significantly lower levels of p-p65 and p-p105 in gC1qR knockdown cells than control cells (Figure 5C). In contrast, unlike core protein, C1q failed to activate NF-κB pathway in MΦ-THP-1 (Figure 5D). Next, MΦ-THP-1 cells were pretreated with the inhibitor for IKKβ (IMD 0354) to block NF-κB pathway prior to treatment with core protein, and found that the expression of A20 was significantly inhibited (p < 0.05) (Figure 5E). These results indicate that NF-κB pathway is activated by HCV core protein and participated in A20 induction. 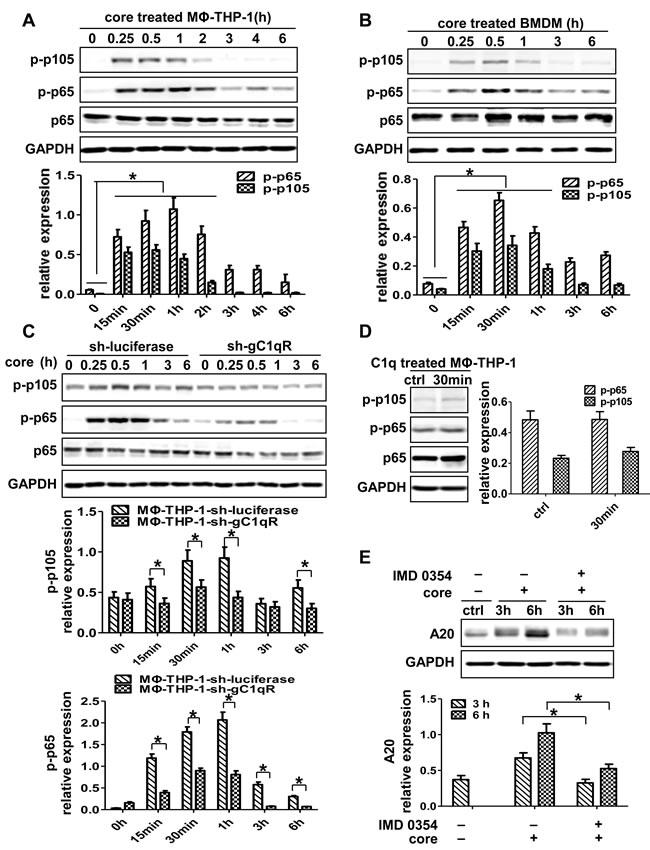 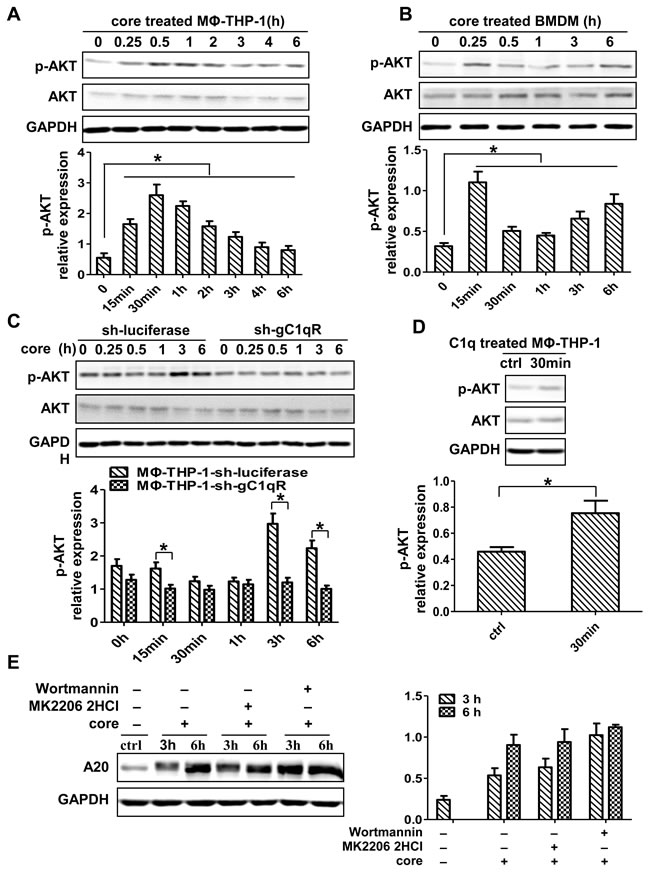 A20, an important negative regulator for cytokine expression, one of molecules induced by TNF, was discovered in human umbilical vein endothelial cells [37]. Studies reported that A20 could protect cells from TNF-α-mediated cytotoxic effect and apoptosis [38, 39], and could also inhibit NF-κB-mediated inflammatory responses [32, 33]. This study mainly focused on the negative regulatory mechanisms induced by HCV infection in macrophages. It was showed that exogenous core protein induced the negative regulator A20 expression in macrophages. In line with our observation, Jia et al recently reported that the HCV core protein enhanced A20 mRNA expression, which contributed to inefficient M1 macrophage polarization during Hepatitis C virus infection [40]. Another report from Ma et al showed that A20 played an important role in negative regulation of mDC functions during chronic viral infection [41]. Our current study demonstrates that A20 induction in macrophages has differential effects on cytokine expression, namely inhibits IL-1β, IL-6 and TGF-b1 but not IL-8 and TNF. This differential effect leads to dysregulation of cytokine balance, which may result in a state of low grade inflammatory responses and HCV chronic infection.

Furthermore, this study confirmed that interaction between HCV core protein and gC1qR triggered the activation of MAPK, NF-κB and PI3K/AKT signaling pathways in macrophages, among which P38, JNK and NF-κB pathways played major roles in the induction of A20. Meanwhile, C1q, a ligand of gC1qR, activated the MAPK and PI3K/AKT signaling pathways but not NF-κB signaling in macrophages. These results indicate that exogenous HCV core protein is mainly binding to the gC1qR, however, we could not exclude other receptors and proteins in macrophages that might be involved in A20 induction by core protein. Interestingly, gC1qR knockdown abrogated the expression of A20 induced by core protein, moreover, the expression of A20 was also induced by gC1qR ligand C1q, which further confirmed that exogenous HCV core protein interacting with gC1qR induced A20 expression.

In summary, we reveal that HCV core/gC1qR engagement triggers the activation of P38, JNK and NF-κB pathways and induces high level of A20 expression. A20 down-regulates many cytokines in macrophages, resulting in low-grade inflammation in liver that may cause a constant state of damage and repair to liver cells and hepatic stellate cells, which eventually leads to liver fibrosis and cancer [45]. Therefore, exploring the mechanisms of HCV core protein-induced A20 expression in macrophages will be favorable in understanding the HCV pathogenesis and provides a novel insight for the mechanisms of HCV chronic infection.

Expression and purification of HCV core protein and pull-down assay

ShRNA knockdown of gC1qR or A20 and generation of cell lines

Short hairpin RNA (shRNA) expressing stable gC1qR, A20 and luciferase transformant were generated by infecting the cells with lentiviral expressing specific shRNA in pSIF1-H1-copGFP vector (System Biosciences). The sequences used in the shRNA targeting gC1qR, A20, and luciferase (the control shRNA) were as follows: 5′-GCTGAGAGTGACATCTTCTCT-3′, 5′-GGATCTGCAGTACTTGCTTCA-3′, and 5′-CTTACGCTGAGTACTTCGA-3′. Western blot was performed to determine the knockdown efficiency.

Cytometric Bead Assay (CBA) was used to detect the levels of cytokines (TNF, IL-8, IL-6, IL-1β and TGF-β1) in cell culture supernatants of MΦ-THP-1-sh-gC1qR and MΦ-THP-1-sh-luciferase cells treated with HCV core protein (10μg/mL) for indicated times. The cells treated with PBS alone served as control groups. Data were acquired using a FACS calibur flow cytometer. The results were based on standard concentration curves and expressed as pg/mL.

MΦ-THP-1 cells were stimulated with HCV core protein (10μg/mL) for indicated times, and were lysed by Protein Extraction Reagent supplemented with PMSF and phosphatase inhibitors. Protein concentrations of the whole cell lysates were measured by Nanodrop. Samples were separated by 12% SDS-PAGE, and transferred onto the PVDF membrane, and then blotted with indicated antibodies. Immunoblot signals were quantified by densitometry using image J. The relative expression of phospho-JNK, phospho-P38, phospho-ERK, phospho-NF-κB p65, phospho-NF-κB p105 and phospho-AKT, were calculated as: the intensity of phospho-protein/the intensity of identical total protein. The relative expression of A20 was calculated as: intensity of A20/the intensity of GAPDH.

The experiments described in this study were performed in triplicate. Results are expressed as mean ± standard deviation. Differences between variables were tested for significance using the Student’s t test. Statistical analyses for multiple comparisons were conducted using the one-way analysis of variance (ANOVA) function. If data were not normally distributed, before applying ANOVA they were transformed in rank. All analyses mentioned above were fulfilled using the SPSS version 16.0 software program. A value of p < 0.05 was considered significant.