A stem-like subpopulation existed in GBM cells, called glioma stem cells (GSCs), might contribute to cancer invasion, angiogenesis, immune evasion, and therapeutic resistance, providing a rationale to eliminate GSCs population and their supporting niche for successful GBM treatment. LincRNA-p21, a novel regulator of cell proliferation, apoptosis and DNA damage response, is found to be downregulated in several types of tumor. However, little is known about the role of lincRNA-p21 in stemness and radioresistance of GSCs and its regulating mechanisms. In this study, we found that lincRNA-p21 negatively regulated the expression and activity of β-catenin in GSCs. Downregulation of lincRNA-p21 in GSCs was resulted from upregulation of Hu antigen R (HuR) expression caused by miR-146b-5p downregulation. MiR-146b-5p overexpression increased apoptosis and radiosensitivity, decreased cell viability, neurosphere formation capacity and stem cell marker expression, and induced differentiation in GSCs. Moreover, knock-down lincRNA-p21 or HuR and β-catenin overexpression could rescue the phenotypic changes resulted from miR-146b-5p overexpression in GSCs. These findings suggest that targeting the miR-146b-5p/HuR/lincRNA-p21/β-catenin signaling pathway may be valuable therapeutic strategies against glioma.

Long intergenic non-coding RNAs (lincRNAs) function as transcription and post-transcription regulator governing mRNA splicing, translation and degradation [12, 13]. Emerging evidence suggests that lincRNA-p21, about 3.0 kb in length and located nearly 15 kb upstream of p21/Cdkn1a gene, is a new regulator of cell cycle, apoptosis and DNA repair, and plays a vital role in some diseases including cancer [14-17]. As a p53-induced lincRNA, lincRNA-p21 employs the heterogeneous nuclear ribonucleoprotein K (hnRNP-K) protein to oppress transcription of p53 target gene [18]. Since lincRNA-p21 is downregulated in some kinds of cancer, it might serve as a tumor suppressor [19-21]. Nevertheless, we know little about the pathological function of lincRNA-p21 in glioma cells and GSCs.

LincRNA-p21 level is low in GBM 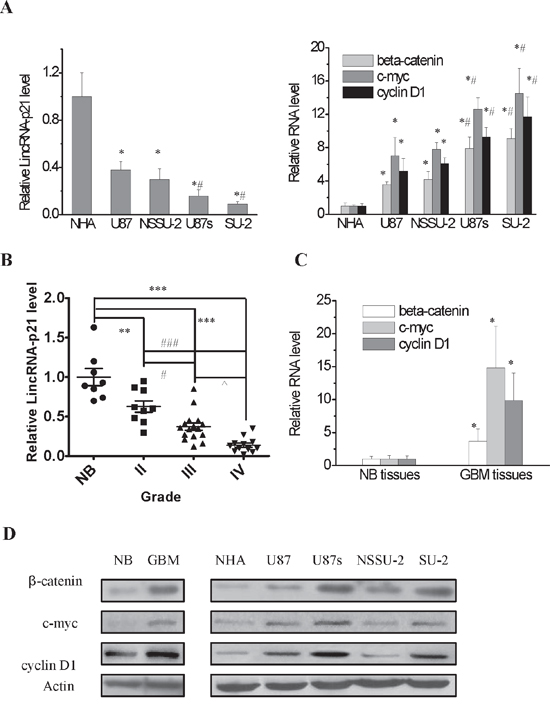 It has been reported that lincRNA-p21 inhibited β-catenin translation in cervical cancer cells [22]. Nonetheless, whether lincRNA-p21 could regulate β-catenin expression in GBM still needs to be identified. We first examined β-catenin level in GBM and GSCs cells as well as normal human astrocytes. The results demonstrated that β-catenin expression was higher in GSCs, at mRNA and protein level, than GBM and NHA cells. In addition, β-catenin expression in GBM cell lines was higher than NHA cells (Figure 1A and 1D). Consistently, β-catenin mRNA and protein levels of GBM tissues were higher than normal brain (Figure 1C and 1D). Then, we investigated Wnt/β-catenin signal activity in these cell lines through detecting c-myc and cyclin D1 levels, which are the targets of β-catenin. Our results showed that their mRNA and protein levels were enhanced in GBM and GSCs cells compared to NHA cells (Figure 1A and 1D). Wnt/β-catenin signal activity was also detected in GBM tissues and normal brain. We mixed the total RNA of 12 GBM and 8 normal brain tissues, respectively. The qRT-PCR results demonstrated that c-myc and cyclin D1 mRNA levels in GBM tissues were higher than normal brain (Figure 1C). Consistently, their protein levels were elevated in GBM tissues compared to normal brain (Figure 1D). Our data showed that lincRNA-p21 and β-catenin levels in GBM cells and tissues were inversely correlated, which suggested that lincRNA-p21 might negatively regulate β-catenin signal activity in GBM cells, particularly in GSCs. 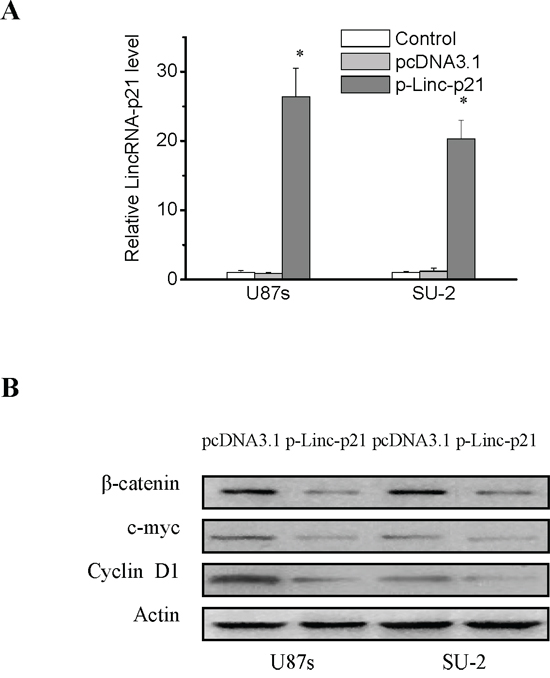 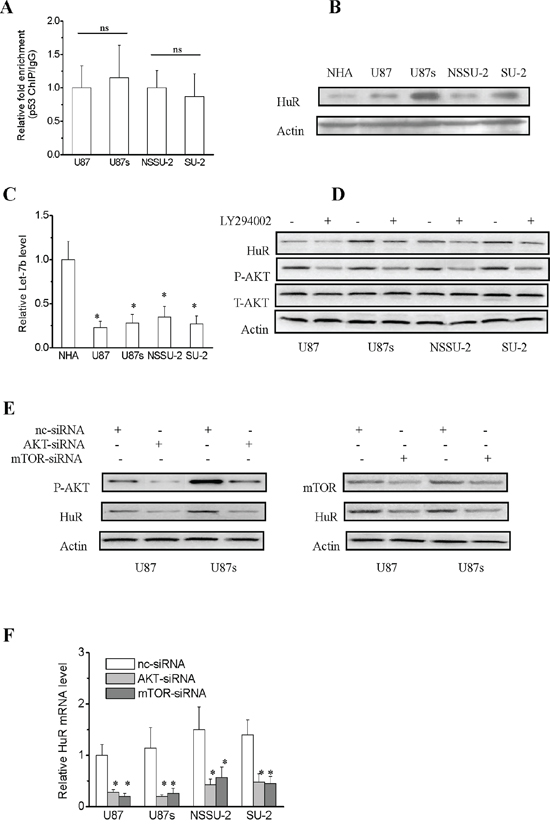 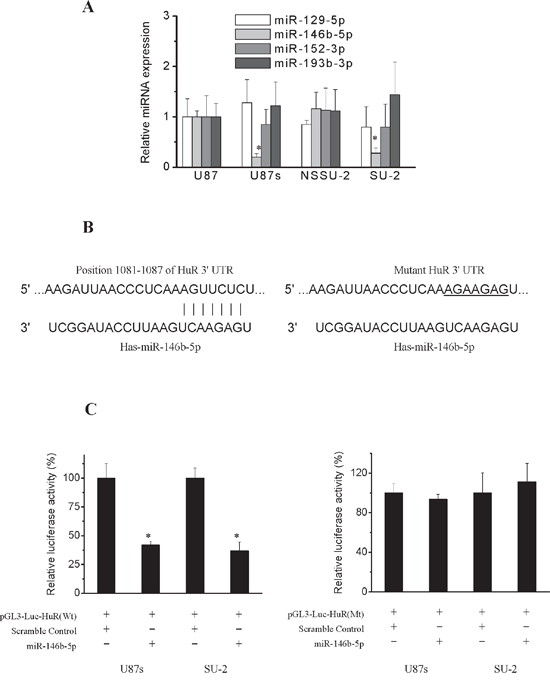 Figure 4: Post-transcriptional regulation of HuR. A. Real-time RT-PCR analysis of the expression levels of the putative miRs that could target HuR. *P<0.01 vs U87 cells. B. A putative miR-146b-5p target site in the wild type and mutated 3’UTR of HuR. C. Relative luciferase activity in GSCs transfected with pGL3-Luc vector containing wild type and mutated 3’UTR of HuR. *P<0.01 vs cells transfected with scramble oligos. 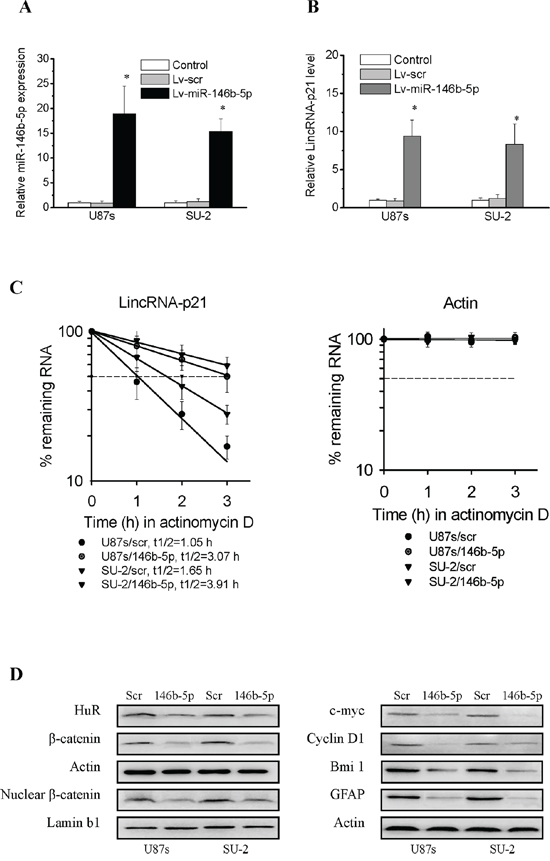 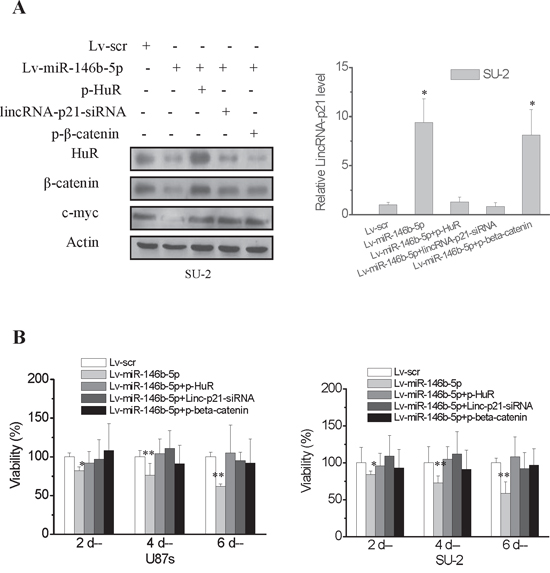 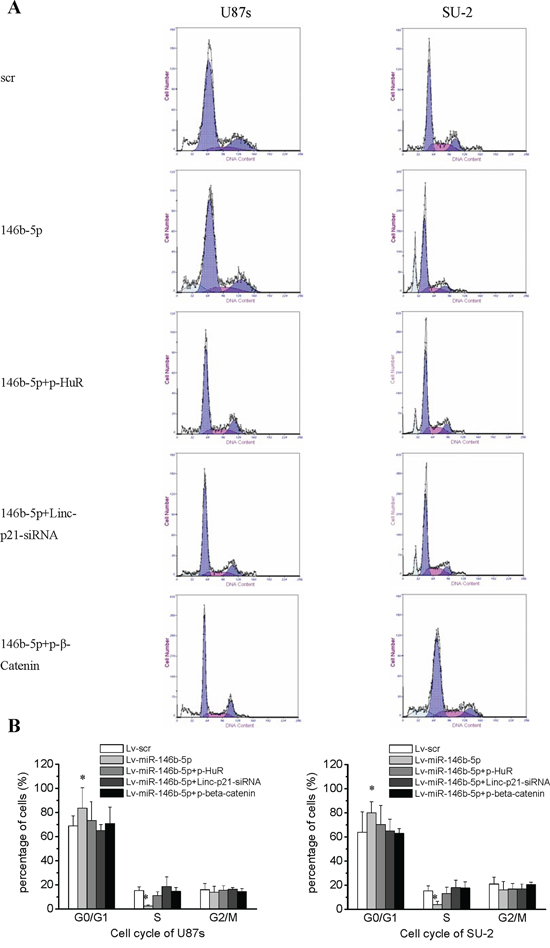 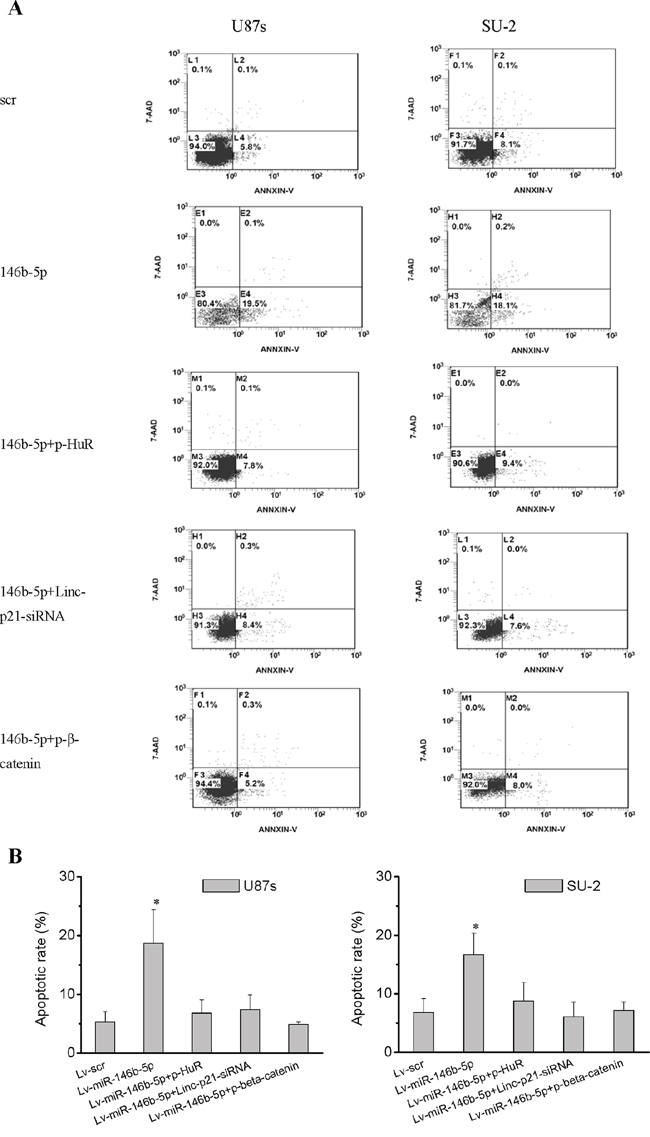 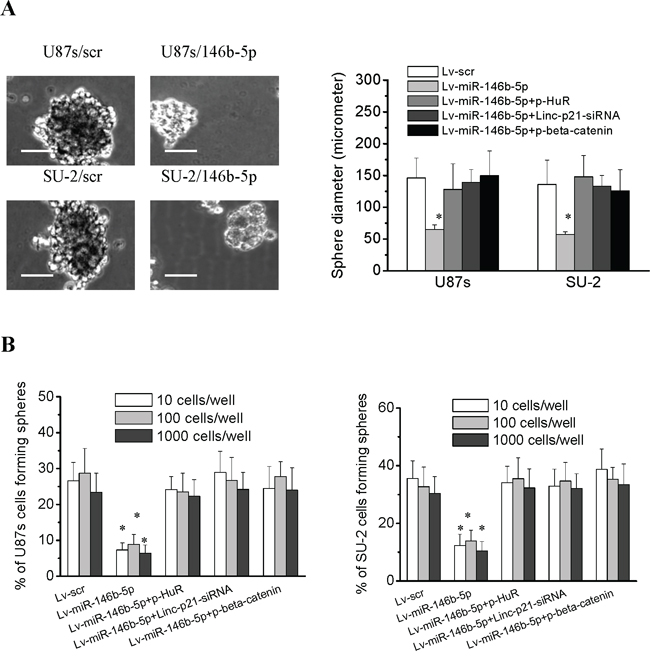 Figure 10: MiR-146b-5p overexpression decreased stemness and induced differentiation in GSCs. A. Flow cytometry analysis of the expression of stem cell markers CD133 and nestin and differentiation marker GFAP. B. The percentage of positive GSCs. *P<0.01 vs Lv-scr. C. Immunofluoresence staining for CD133, nestin, GFAP and Tuj-1. 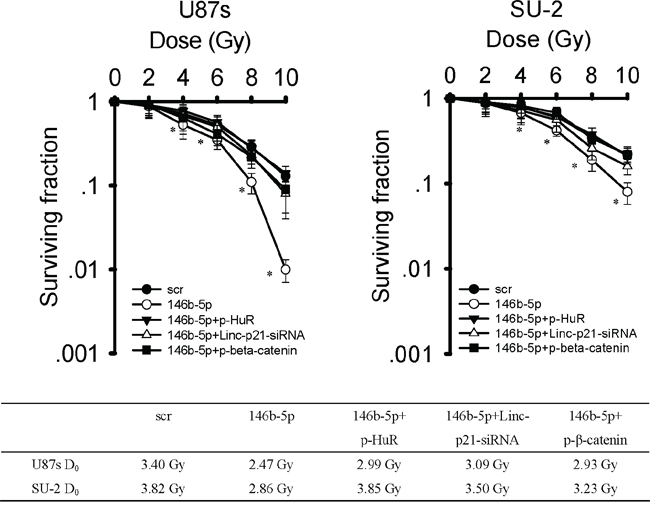 Figure 11: MiR-146b-5p overexpression decreased radioresistance of GSCs. After exposure to 0, 2, 4, 6, 8 and 10 Gy X-ray irradiation, cell survival fractions were examined and the survival curves of cells were obtained from data fitting according to the linear quadratic model. Error bars indicate the standard error of the mean of three individual experiments. *P<0.01 vs U87s/Lv-scr or SU-2/Lv-scr. D0 (mean lethal dose) was calculated by the linear quadratic model.

MiR-146b-5p expression has been found in almost all human organs [38]. In papillary thyroid carcinoma and lung cancer, it acts as an oncogene and has been regarded as a relevant diagnostic marker [39, 40]. However, in glioma and some other cancers, miR-146b-5p expression is downregulated and acts as an tumor suppressor gene [41]. A recent study revealed that miR-146b-5p inhibited proliferation and promoted apoptosis of glioma, and predicted better prognosis in human gliomas, especially in glioblastoma. Its downregulation was a main reason of glioma genesis and malignant progression [42]. Consistent with these results, we found miR-146b-5p was down-regulated in GSCs compared to non-GSCs glioma cells and its overexpression could suppress stemness and radioresistance of GSCs by targeting HuR, which was verified as a miR-146b-5p target in GSCs by bio-informatic analysis, real-time PCR, and luciferase reporter assay in the present study.

HuR, a ubiquitous RNA binding protein (RBP), influences cell proliferation, survival and carcinogenesis through its RNA recognition motifs binding to adenine and uridine (AU)-rich stability elements (ARE) in 3’-UTR of mRNA [43]. Instead of acting as an RNA stabilizer, HuR works with the Ago2 protein and let-7 to destabilize lincRNA-p21 [22]. Many studies have reported elevated expression of HuR in numerous malignancies [44]. In this study, we found that HuR expression was up-regulated in GSCs compared with non-GSCs glioma cells, which resulted in lincRNA-p21 down-regulation, leading to elevated β-catenin expression in GSCs. The mRNA of c-myc, a target gene of β-catenin, has been verified as a target of HuR [45]. Kim et al. further revealed that the site bound by HuR are proximal to that bound by let-7 in 3’-UTR of c-myc, which suggested that HuR might recruit let-7-loaded RNA-induced silencing complex to inhibit c-myc expression in HeLa cells [46]. Thus, the effect of HuR on c-myc expression might be direct binding c-myc mRNA and supressing translation in cervical carcinoma, besides its indirect influence through lincRNA-p21/β-catenin revealed in this study.

Cells were crosslinked with 1% formaldehyde, harvested, resuspended in lysis buffer supplemented with 1 mM PMSF, and sonicated. The chromatin fragments were immunoprecipitated using either p53 or IgG (Millipore, MA, USA) antibodies. After extensive washing steps, the formaldehyde crosslinks were reversed by treatment at 65°C. DNA was purified by phenol/chloroform extraction followed by ethanol precipitation and samples were used in real-time PCR.

The cDNA sequences of AKT and mTOR were obtained from GenBank (NM_001014431 and 004958). The siRNA target design tools from Ambion were used to design siRNA. AKT-siRNA was designed and synthesized as follows: sense: 5'-CGGUAGCACUUGACCUUUUTT-3', antisense: 5'-AAAAGGUCAAGUGCUACCGTG-3'. mTOR-siRNA was designed and synthesized as follows: sense: 5'-CAUUCGCAUUCAGUCCAUATT-3', antisense: 5'-UAUGGACUGAAUGCGAAUGAT-3'. The sequence of LincRNA-p21 was previously reported [18] and LincRNA-p21-siRNA was designed and synthesized as follows: sense: 5'-UGAAAAGAGCCGUGAGCUATT-3', antisense: 5'-UAGCTCACGGCUCUUUUCAAT-3' (Sangon Inc. Shanghai, China). Cells were plated 24 h prior to transfection and were transfected in 6-well plates by use of Lipofectamine RNAiMAX (Invitrogen, Carlsbad, CA, USA). AKT, mTOR and LincRNA-p21-siRNA and negative control siRNA (nc-siRNA) were used at 100 nM final concentration.

The 3’UTR of HuR gene contains a putative miR-146b-5p-target site: 5’-AAGAUUAACCCUC AAAGUUCUCU-3’. The wild type and mutated 3’UTRs of HuR were amplified by PCR from cDNA of U87s cells and were ligated into the pGL3 basic luciferase expression vector (pGL3-Luc) (Promega, Madison, WI, USA) at the 3’-end of the luciferase coding sequence. The pGL3-Luc vector containing wild type and mutated 3’UTRs of HuR and the internal control vector pRL-TK (Promega) were co-transfected into U87s and SU-2 cells. Twenty four hours later, 20 nM of miR-146b-5p oligos (5’-UGAGAACUGAAUUCCAUAGGCU-3’) or scramble oligos (5’-UUCUCCGAACGUGUCACGUTT-3’) (GenePharma Co. Shanghai, China) were transfected into U87s and SU-2 cells. Luciferase activity was measured 48 h after vectors transfection using Dual-luciferase Reporter Assay System (Promega) according to the manufacturer’s instructions.

GSCs with stable integration of the miR-146b-5p mature sequence or scramble sequence were generated through lentiviral-mediated gene transfer [33]. To generate the respective viruses, 293T cells were transfected with the lentiviral vector, pGLV-miR-146b-5p-GFP or pGLV-scr-GFP, and the packaging plasmid PG-P1-VSVG, PG-P2-REV and PG-P3-RRE according to standard protocols. The target GSCs were infected with viruses encoding either miR-146b-5p or scramble sequence and selected using puromycin. After 4 weeks, single clones were analyzed for positive green fluorescent protein (GFP) signals. The positive clones were expanded for additional testing.

Actinomycin D (Sigma, St Louis, MO, USA) was added to the media at a concentration of 5 μg/ml to arrest transcription at time zero. Cells were harvested for RNA analysis at 0, 1, 2, and 3 h. The half-life of each mRNA was calculated using the following formula: t1/2 = ln2/kdecay. The decay rate constant (kdecay) was obtained from fitting the changes of mRNA concentration with respect to time to a first order decay model using a least squared differences method [49].

Full-length cDNA of LincRNA-p21, HuR and β-catenin were isolated from cDNA of U87s cells and were amplified through RT-PCR using specific primers. The primer sequences used were as follows: LincRNA-p21 forward, 5’-TGGCAGTCTGACCCACACTCCCCACGCCC-3’ and reverse, 5’-ACAGTGCACAGACAATCATACACACGTGT-3’. HuR forward, 5’-ATGGTCTAA TGGTTATGAAGAC-3’ and reverse, 5’-TTTGTGGACTTGTTGGTTTTG-3’. β-catenin forward, 5’-AAAATCCAGCGTGGACAATGG-3’ and reverse, 5’-TGTGGCAAGTTCTGCATCATC-3’. The amplified cDNA fragment were sub-cloned into the pcDNA3.1(+) vectors. The recombinant vectors were confirmed by the digestion analysis of restriction endonuclease and inserted sequences were verified by DNA sequencing. Cells were transfected in 6-well plates by use of Lipofectamine 2000 (Invitrogen, Carlsbad, CA, USA).

GSCs viability was measured by a 3-(4, 5-dimethylthiazol-2-yl)-2, 5-diphenyl tetrazolium bromide (MTT) assay (Sigma, St Louis, MO, USA) after 2, 4 and 6 days culture. GSCs viability was calculated as a ratio of OD value, and the cell viability of GSCs/Lv-scr after different periods of culture were taken as 100%.

Cells were irradiated with X-ray (6 MV, the dose rate was 200 cGy/min) by a PRIMUS accelerator (SIEMENS Medical Solutions, Erlangen, Germany) at room temperature. After irradiation, a specific number of cells (100 for cells irradiated with 0 or 2 Gy, 200 for 4 Gy and 2000 for 6, 8 and 10 Gy) was plated in petri dishes in triplicate for clonogenic assay. Then the cells were incubated for 12 days. Colonies were fixed by 37% formaldehyde solution and stained with crystal violet and colonies of more than 50 cells were counted. Furthermore, the cell survival fraction was counted out and the mean lethal dose (D0) was calculated by the linear quadratic model.

For intracranial implantation, 36 h after irradiation with 8 Gy X-ray, GSCs/Lv-scr, GSCs/Lv-miR-146b-5p and GSCs/Lv-miR-146b-5p+p-HuR cells were counted and the indicated numbers of GSCs were implanted into the right frontal lobes of 6–8-week-old female athymic nude mice (Experimental Animals Center of Shanghai Institute of Life Science, Shanghai, China).

All statistical parameters were calculated with GraphPad Prism 6.01 (GraphPad Software Inc.). Student’s t test was used for most data analysis. For comparisons among more than two groups, One-way Analysis of Variance (ANOVA) followed by Bonferroni post-test was performed. Mice survival were evaluated by the Kaplan-Meier method and analyzed by the log-rank test. P<0.05 was considered to be statistically different.

This work was supported by the National Natural Science Foundation of China (No. 31570851, 81201742 and 81071958) and Priority Academic Program Development of Jiangsu Higher Education Institutions (PAPD).

40. Patnaik SK, Kannisto E, Mallick R, Yendamuri S. Overexpression of the lung cancer-prognostic miR-146b microRNAs has a minimal and negative effect on the malignant phenotype of A549 lung cancer cells. PLoS One. 2011; 6: e22379.