Background: Due to the extremely rare incidence, data about colonic GISTs are limited. Therefore, aim of the present study was to explore clinicopathological characteristics and prognosis of colonic GISTs.

Patients and Methods: Colonic GISTs cases were obtained from our center and from case report and clinical studies extracted from MEDLINE. Clinicopathological features and survivals were analyzed.

Results: There were 79 colonic GISTs patients with a female predominance. The median age was 66 years (range 0.17-84). The median tumor size was 5.8 cm (range 0.5-29). The most common location was sigmoid colon (45.8%), followed by transverse colon (19.5%). The majority of colonic GISTs were high risk (70.8%). Mitotic index was correlated with gender (P = 0.002) and tumor size (P = 0.005), and tumor location was correlated with age (P = 0.017). The five year DFS and DSS were 57.4% and 61.6%, respectively. Mitotic index and NIH risk classification were associated with prognosis of colonic GISTs. However, mitotic index was the only independent risk factor. The distribution of tumor size and NIH risk classification were significantly different between colonic and gastric GISTs (both P = 0.000). The DFS and DSS of colonic GISTs were significantly lower than that of gastric GISTs (P = 0.012 and P = 0.002, respectively).

Gastrointestinal stromal tumors (GISTs) are commonest mesenchymal neoplasm of alimentary tract, represent 1% to 2% of alimentary malignant tumors [1]. GISTs are derived from interstitial cells of Cajal (ICC), and are related with activating mutations in KIT protooncogene [2]. It has been established through positive staining for CD117 and CD34 [3]. Histologically, most GISTs show spindle morphology (70%), followed by epithelioid (20%) and mixed morphology (10%) [4].

GISTs can occur anywhere in the alimentary tract but most commonly in the stomach (40% to 70%) [5]. GISTs located in the colorectum are relatively rare, representing approximately 5% of all GISTs [6]. GISTs located in colon is much rarer, and it represents only 1-2% of all cases [7]. Thus, studies involving large numbers of colonic GISTs are lacking, and the clinicopathological profiles and prognosis are limited. Therefore, the aim of our present study was to explore clinicopathological characteristics and prognosis of colonic GISTs. 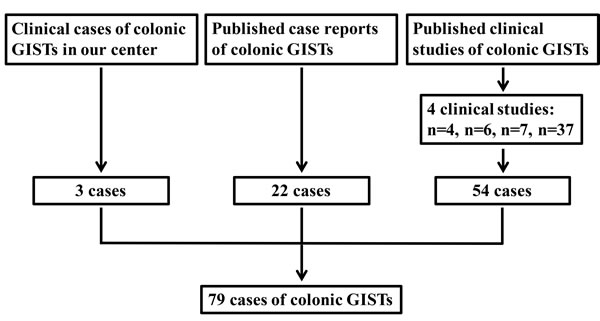 The relationship between clinicopathological features were summarized in Table 2. The mitotic index exceeded 5/50HPF for the majority of male patients but only for the minority of female patients (P = 0.002), and it was positively related with tumor size (P = 0.005). Age was associated with tumor location (P = 0.017). For patients less than 60 years old, the commonest location were transverse and sigmoid colon. For patients more than 60 years old, the commonest location was sigmoid colon only.

Table 2: The relationship between clinicopathological characteristics

Table 4: Prognostic factors for DSS and DFS in patients with colonic GISTs according to univariate and multivariate analysis

Figure 3: DFS and DSS of colonic GISTs by mitotic index.

The clinicophathological features of 79 colonic GISTs were compared with 297 gastric GISTs in our center (Table 5). The results showed that the distribution of tumor size and NIH risk classification were significantly different between colonic and gastric GISTs (both P = 0.000). In order to compare the prognosis between colonic and gastric GISTs, the two groups were matched according to tumor size, mitotic index and imatinib treatment. The entire process was shown in Figure 5. Finally, 39 cases of colonic GISTs and 39 cases of gastric GISTs were selected. No intergroup difference was found in age, gender, tumor size, mitotic index and imatinib treatment (Table 6). The DFS (P = 0.012) and DSS (P = 0.002) of colonic GISTs were significantly lower than that of gastric GISTs (56.0% vs 85.7%, 62.7% vs 96.3%). 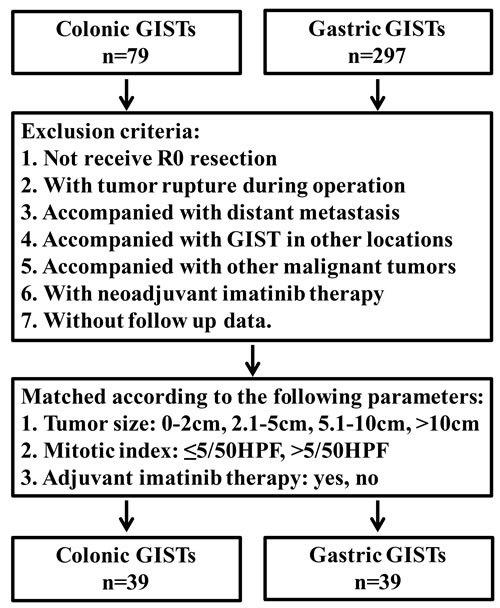 Table 6: Comparison of predefined variables between colonic and gastric GISTs

GISTs located in the colon constitute a very rare subset with limited data on the clinicopathological features and prognosis. Therefore, we evaluated 79 cases of colonic GISTs from our center and from literatures in MEDLINE. The present study represents the largest analysis of colonic GISTs.

The surgical treatment of GISTs is radical resection of the primary tumor with negative microscopic margins. It is well known that lymph node involvement are rare [11], and lymphadenectomy or mesorectal excision is unnecessary. An appropriate segmental en bloc resection is enough for colonic GISTs only if adjacent organs are involved [12]. However, 3 of 17 patients (17.6%) had lymph node metastasis in our present study, which was apparently higher than the previous report. Although the incidence of lymph node metastasis was relatively low, necessity of lymphadenectomy may need careful consideration in the treatment of colonic GISTs.

Even with surgical resection, there is a high risk of recurrence and metastasis. Distant metastases are the most frequent treatment failure for colorectal GISTs and are associated with poor prognosis. The most common site of metastasis in colorectal GISTs is liver, followed by peritoneum. Other locations include pleura, lung, bone and retroperitoneum [13]. In our present study, 9 patients suffered liver metastasis and 7 patients suffered peritoneal metastasis. Whereas GISTs predominantly metastasis to liver and leiomyosarcomas mainly spread to lung [14]. This may assistant in the differential diagnosis of the two tumors.

It was reported that approximately 10-30% of GISTs are regarded as clinically malignant [15], and tumor size and mitotic index are valuable predictors for evaluating malignant potential of GISTs [16]. In the present study, mitotic index more than 5/50HPF and high risk category were associated with poorer prognosis. Tumor location is also a critical risk factor for recurrence after radical surgical resection [17]. However, the modified NIH risk classification system only distinguishes gastric from non-gastric tumors. The prognostic features of colonic GISTs are unclear. Considering different distribution of tumor size and NIH risk category between colonic and gastric GISTs, patients were matched in order to compare the prognosis. The survival analysis showed that the DFS and DSS of colonic GISTs were significantly lower than gastric GISTs. It was reported that non-gastric GISTs have similar risk for tumor recurrence [18]. However, the survival of colonic GISTs were not compared with that of duodenum, small intestine or rectum, due to the limited sample size of GISTs in these locations in our center.

There are some limitations of the present study. First, the present study is a retrospective analysis and lacks systematic prospective data. Therefore, completeness of the data is limited. Second, the sample size of colonic GISTs was not large enough, which will result in sampling error. Third, due to the limited sample size of duodenum, small intestine or rectum GISTs in our center, we could not compare the clinicopathological features and prognosis of colonic with non-gastric GISTs.

Figure 6: Comparison of DFS and DSS between colonic and gastric GISTs.

GISTs cases of the colon were from our department and in addition from the literature. From May 2010 to March 2015, 3 cases of colonic GISTs were diagnosed and received treatment in our department. Literature search of MEDLINNE was performed for all articles in English published from 2000 through 2015. MEDLINNE search resulted in 21 case reports [19-39] including 22 patients and 4 case series [8, 40-42] including 54 cases. To this end, a total of 79 colonic GISTs patients were identified (Figure 1). In addition, the clinicopathological characteristics and prognosis of 297 cases of gastric GISTs were analyzed and compared with colonic GISTs. This study was approved by the Ethics Committee of Xijing Hospital, and written informed consent was obtained from the three patients in our center.

Data were processed using SPSS 16.0 for Windows (SPSS Inc., Chicago, IL, USA). Numerical variables were expressed as the mean ± SD unless otherwise stated. Discrete variables were analyzed using the Chi-square test or Fisher’s exact test. Significant predictors for survival identified by univariate analysis were assessed by multivariate analysis using the logistic regression analysis. Evaluation for disease-free-survival (DFS) and disease-specific-survival (DSS) were obtained by the Kaplan-Meier method. The P value was considered to be statistically significant at the 5% level.

7. Edge SB and Compton CC. The American Joint Committee on Cancer: the 7th edition of the AJCC cancer staging manual and the future of TNM. Annals of surgical oncology. 2010; 17:1471-1474.