Comparative effectiveness and safety between oxaliplatin-based and cisplatin-based therapy in advanced gastric cancer: A meta-analysis of randomized controlled trials

3Department of Nephrology, The Affiliated Huai'an Hospital of Xuzhou Medical College and The Second People's Hospital of Huai'an, Huai'an, China

Around one million people are newly diagnosed with gastric cancer all over the world every year. The American Cancer Society estimates there would be 24,590 new gastric cancer cases and 10,720 gastric cancer deaths in 2015 in the United States [1]. Currently, the curative surgical resection is the mainstay of treatment for gastric cancer. However, approximately two thirds of the patients miss the chance of radical surgery and fall on the list of palliative chemotherapy with a relative disappointing outcome [2].

Platinum-based drugs are generally adopted as anticancer therapies for various cancers by binding to DNA strands of tumor cells and interfering with its replication [3]. As a platinum drug, cisplatin plays an important role in the treatment of advanced gastric cancer. Patients with advanced gastric cancer were treated with S-1 plus cisplatin as the first-line treatment presenting markedly longer median overall survival (OS) and progression-free survival (PFS) than those treated with S-1 alone [4]. In addition, irinotecan could significantly prolong the PFS when combined with cisplatin than it alone [5]. Oxaliplatin, a new promising anticancer drug, also has obviously inhibitive effect on locally advanced or metastatic gastric cancer [6]. A randomized, open-label, multicenter phase III study presented that oxaliplatin plus S-1 was as effective as cisplatin plus S-1 and with favorable safety profile in the palliative chemotherapy for advanced gastric cancer [7].

As shown in Figure 1, 695 initial articles including our search terms were obtained. In these studies, 642 were excluded for not randomized controlled trials (RCTs). The rest 53 articles were retrieved for full-text review, from which 48 were further excluded for not the comparison between oxaliplatin-based therapy and cisplatin-based therapy. Finally, 5 studies including 2,046 patients met the inclusion criteria and were included in the meta-analysis [7, 9–12]. 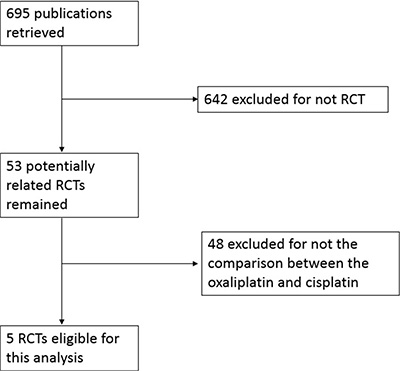 The detailed characteristics of included studies were listed in Table 1. The median age of patients in included studies ranged from 56 to 65 years old. The five studies were made up of two phase II RCTs and three phase III RCTs. All studies reported the ORR, PFS, OS and toxicities. For toxicities, the study by Popov et al. was excluded for reporting the AEs by the cycles of treatment, the other four studies by the numbers of patients were enrolled. Two studies appraised the comparison between oxaliplatin-based and cisplatin-based therapy in two-drug regimen [7, 9] while the others appraised the comparison in three-drug regimen [10–12]. The study by Cunningham et al. was two-by-two design and divided into two parts according to containing oxaliplatin or cisplatin, respectively [11].

Five eligible studies all covered the ORR. As shown in Figure 2, the results of the meta-analysis presented that there were no significant difference between oxaliplatin-based and cisplatin-based therapy, and no heterogeneity among the studies (OR = 1.17, 95% Confidence Intervals (CI) = 0.98–1.40, p = 0.08, I2 = 0%). In addition, there was no bias among all included studies (Begg test, p = 0.133; Egger test, p = 0.099), and no decisive effect according to the influence analysis conducted by stata12.0 (Supplementary Figure 1).

Five eligible studies all reported the PFS. There was no significant heterogeneity between these studies when pooling the HR, so HR was pooled in the fixed model. As shown in Figure 3, the results presented 8% improvement of PFS in the oxaliplatin-based therapy, but with no statistically significant (HR = 0.92, 95% CI = 0.84–1.01, p = 0.09, I2 = 0%). Besides, there was no bias among all included studies from the Begg test and Egger test (Begg test, p = 1.000; Egger test, p = 0.963), and no decisive effect according to the influence analysis (Supplementary Figure 2).

The OS was also reported in five studies. As shown in Figure 4, a fixed model was used to pool HR because there is no significant heterogeneity among included studies. The results indicated a slight improvement of OS in oxaliplatin-based therapy group without statistically significant (HR = 0.91, 95% CI = 0.82–1.01, p = 0.07, I2 = 0%). No bias among all included studies was detected, (Begg test, p = 0.086; Egger test, p = 0.174), and the influence analysis showed no conclusive effect (Supplementary Figure 3).

In recent years, palliative chemotherapy (e.g. fluoropyrimidine, platinum compounds, docetaxel and epirubicin) prolongs the survival and improves the quality of life in patients with metastatic gastric cancer [13]. A recent meta-analysis presented that the platinum-based therapy significantly improved the therapeutic effect compared to non-platinum-based therapy in patients with advanced gastric cancer [14]. As the most common platinum drugs, oxaliplatin and cisplatin are both of great importance in the treatment of advanced gastric cancer. Plenty of clinical trials were conducted to explore the effect of oxaliplatin in advanced gastric cancer [15–20]. In the study by Lu et al., the results showed that oxaliplatin combined with S-1 significantly increased the median survival time (14.0 versus 11.0 months, p = 0.03), PFS (6.5 versus 4.0 months, p = 0.02), and 1-year survival rate (63.8% versus 48.9%) than S-1 alone [16]. Cisplatin plays also an active role in the chemotherapeutic therapy and studies were well conducted to evaluate the function of cisplatin in the treatment of advanced gastric cancer [4, 16, 21–23]. In the study by Koizumi et al., 148 patients were assigned to S-1 plus cisplatin and 150 patients were assigned to S-1 alone. The results showed that the time of median OS (13.0 vs 11.0 months, p = 0.04) and PFS (6.0 vs 4.0 months, p < 0.0001) was significantly increased in the group of S-1 plus cisplatin, however, there were more severe (3–4 grades) AEs including leucopenia, neutropenia, anemia, nausea, and anorexia in the combined group.

The highlighted strength of our meta-analysis was that five RCTs with 2,046 patients were included compared with three RCTs with 1294 patients in study by Montagnani et al. A updated analysis with a larger population was more convincing. Nonetheless, our meta-analysis is not without limitations. First, the HR of PFS or OS could not be obtained directly from included studies [9, 10, 12]. Besides, few studies were included to analyze certain AEs (e.g. creatinine), which influenced the reliability of the results. Finally, the effects of confounding factors (e.g. sex, drug dosage) were not analyzed for half-baked data.

Cochrane Controlled Trials Registry, PubMed and EMBASE database were searched up to April 10, 2016. We also reviewed the Annual meeting proceedings from European Society of Medical Oncology (ESMO) and American Society of Clinical Oncology (ASCO). The search strategy was “platinum or cisplatin or oxaliplatin” in combination with “gastric cancer or gastric carcinoma or stomach neoplasm or gastro-oesophageal cancer or oesophago-gastric cancer”, “metastatic or advanced or unresectable or recurrent or stage IV” and “RCTs or randomized controlled trials”. All eligible studies were retrieved, and their reference lists were checked for additional relevant publications.

The exclusion criteria were as follows: (i) not phase II/III randomized controlled trials; (ii) ongoing studies; (iii) review articles; (iv) studies not within the field of interest of this study.

As for each study, the following information was extracted: year of publication, trial phase, the first author’s surname, number of subjects, the percentage of male, median age, treatment arm, effectiveness and frequency of all-grade and severe adverse events (AEs) assessed by the National Cancer Institute Common Toxicity Criteria (CTC) in each arm. Data extraction and information on study design, outcomes were performed by two independent reviewers (Zhao Y and Huang J) and disagreements were resolved by discussion and consensus with a third reviewer (Qi X).

Effect estimates were analyzed with Review Manager 5.2. Dichotomous data were compared using an OR. The HRs with their 95% CIs were directly obtained from the article or calculated by using previously published methods [27]. Forest plots were generated for graphical presentations, and heterogeneity among different studies was appraised by Q statistics and I2 estimates. Fixed-effects model was used to aggregate data if there were no statistical heterogeneity. However, when effects were heterogeneous (I2 > 50%), randomized effects model was carried out. Publication bias was examined using analyses described by Egger and Begg by stata12.0. Influence analysis was employed to the study by stata12.0. The 95% CI for each result were computed.

The authors have declared no conflicts of interest

This work was supported by the National Natural Science Foundation of China (81572977).

2. Pozzo C, Barone C. Is there an optimal chemotherapy regimen for the treatment of advanced gastric cancer that will provide a platform for the introduction of new biological agents? Oncologist. 2008; 13:794–806.