Association of SOX2 and Nestin DNA amplification and protein expression with clinical features and overall survival in non-small cell lung cancer: A systematic review and meta-analysis

Up to now, the prognosis of non-small cell lung cancer (NSCLC) is poor. With progress of cancer biology, a number of genes have been investigated for predicting prognosis of NSCLC, such as cancer stem cell markers SRY (sex determining region Y)-box 2 (SOX2) and Nestin. Recently, a series of studies have been performed to examine the associations of SOX2 and Nestin with clinical parameters and prognosis in NSCLC, however, the results were not consistent. In the present study, we conducted a systematic review and meta-analysis to summarize the associations. Four English databases (PubMed, ISI web of science, Embase, and Ovid) were used to search the relevant studies with the last date of November 10, 2015. The pooling analyses were stratified by DNA amplification and protein expression. The pooling ORs or HRs were used to assess the strength of the associations. Finally, we included 19 articles for SOX2 and six articles for Nestin according to the inclusion and exclusion criteria. The pooling analyses revealed that there were significant associations between SOX2 DNA amplification and clinical features of NSCLC, gender, smoking status, squamous cell cancer (SCC) histology, and differentiations. And significant associations were also identified between SOX2 protein expression and clinical parameters, smoking status and SCC histology. For Nestin, its protein expression was correlated with lymph node metastasis and stage. Simultaneously, we found that high/positive SOX2 alterations, either DNA amplification or protein expression, were favorable for overall survival (OS) in NSCLC. On the contrary, high/positive Nestin protein expression was poor for OS.

In recent years, some activated oncogenes such as Epidermal Growth Factor Receptor (EGFR) mutations and Anaplastic Lymphoma Kinase (ALK) rearrangements have been found and used as novel therapeutic targets [3–5]. All these progresses encourage the researchers to identify new biomarkers or therapeutic targets. Of which, the cancer stem cell markers such as SRY (sex determining region Y)-box 2 (SOX2) and Nestin have gotten researchers interested.

SOX2 locates on chromosome 3q26.33 and encodes a transcription factor of 317 amino acids [6, 7]. It has been reported to be involved in pluripotency regulation in embryonic stem cells and the morphogenesis and homoeostasis of tracheobronchial epithelia [8]. Recently, SOX2 aberrant DNA amplification and protein expression have been found in various types of tumors. Functional experiments suggest that SOX2 is responsible for cellular proliferation, tumor invasion and migration, self-renewal, maintenance in cancer stem cell populations, and lung tumorigenesis [6, 9–12]. It also has been reported that DNA amplification and protein expression of SOX2 are associated with clinicopathological features and prognosis in lung cancers, however, the results are not always consistent [13–16]. Although a meta-analysis in the year of 2013 has been performed to summarize the associations, the included studies were relatively rare and the authors do not distinguish SOX2 DNA amplification, mRNA expression, and protein expression [17].

Nestin is a member of the intermediate filament (IF) family and serves as a potential proliferative and muti-potency marker in progenitor and stem cells [18, 19]. Nestin has been also found to have an anti-apoptotic function through inhibiting caspase activation [20]. Recent observations have revealed a link between Nestin aberrant expression and malignant characteristics and poor prognosis in different cancers [21–25].

In the present study, we performed a systematic review and meta-analysis to investigate the associations of DNA amplification and protein expression of SOX2 and Nestin with clinicopathological features and overall survival in NSCLC.

The literature selection process was shown in Figure 1. Four English databases were used and a total of 1442 documents were initially identified. After excluding those duplicated records, animal experiments or cellular studies, non-NSCLC related studies, and non-original articles, 36 full texts were left for further evaluation. Subsequently, six articles were excluded due to insufficient data [26–31], and one was excluded because it contained other type of lung cancer besides NSCLC [32]. Here, we only focused on DNA amplification and protein expression. Then another four studies were excluded due to only reporting the SOX2 or Nestin mRNA related data [33–36]. Finally, 25 papers were included in the present study [13–16, 21, 37–56]. Of which, 19 articles reported SOX2 DNA amplification and/or protein expression [13–16, 37–51], six articles reported Nestin protein expression, and none reported Nestin DNA amplification [21, 52–56]. In addition, Velcheti et al. [46] and Iijima et al. [50] reported two independent cohorts, respectively, and each cohort was considered as independent study in the meta-analysis. The included studies were published from 2010 to 2015 and the sample size ranged from 33 to 758. In the original studies, the DNA amplification was determined by PCR or FISH (n = 3 and 6) and the protein expression was determined by IHC or IF (n = 19 and 2). The detailed characteristics of the included studies were shown in Table 1. 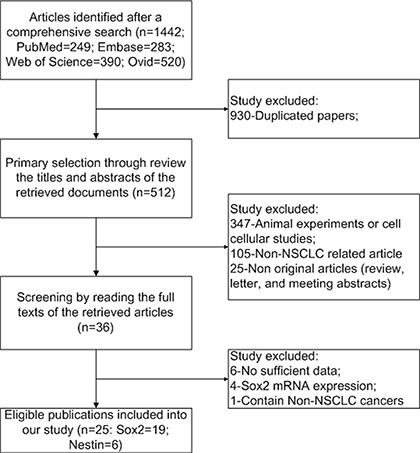 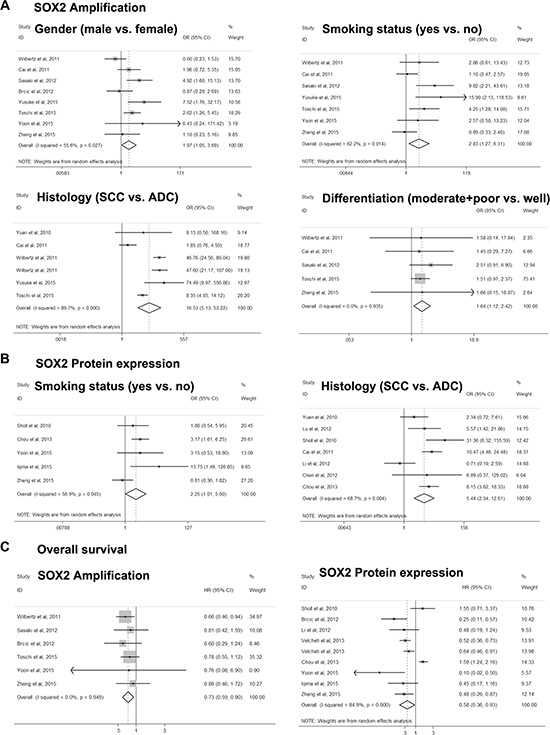 Figure 2: Forest plot for associations of SOX2 with clinicopathological features and overall survival in NSCLC. 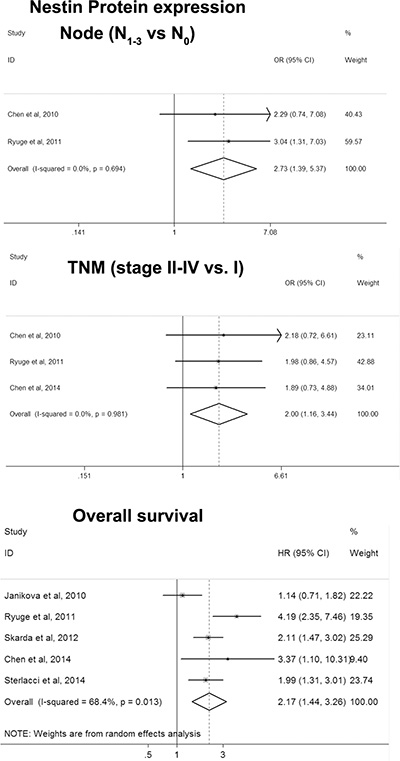 Figure 3: Forest plot for associations of Nestin with clinicopathological features and overall survival in NSCLC. 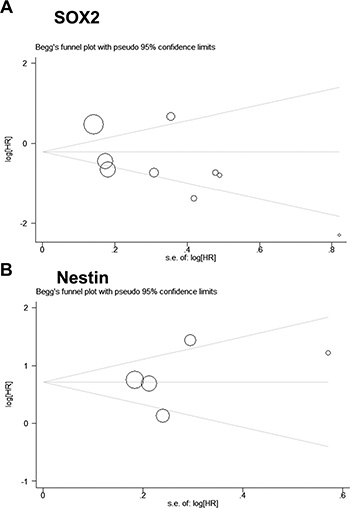 A number of studies have been performed to explore the associations of cancer cell stem cell markers, such as SOX2 and Nestin, with clinical parameters and prognosis in various types of cancers including NSCLC. However, the results in the studies were not consistent.

Although we pooled all the potential studies according to the inclusion and exclusion criteria, some limitations existed. Firstly, the number and sample size of Nestin related studies were small. Secondly, the studies of the subgroup of ADC for SOX2 were rare. As the original studies suggested that SOX2 was more frequently upregulated in SCC than ADC, the predictive role of SOX2 in SCC and ADC might be not consistent. Then the impact of SOX2 on prognosis in SCC and ADC should be compared in more studies with larger sample size.

In summary, we got a comprehensive result from the current meta-analysis that SOX2 DNA amplification and protein expression were associated with smoking status and histology, and were favorable for prognosis in NSCLC. And Nestin was associated with cancer stage, lymph node, and poor outcome.

A systematic search was performed in four English databases (PubMed, EMBASE, OVID, and Web of science) for published articles on the associations of SOX2 and Nestin with clinical features and/or overall survival (OS) in NSCLC up to November 10, 2015. The following keywords were used: “lung OR pulmonary”, “cancer OR tumor OR carcinoma”, and “Nestin OR Sex determining region Y box-2 OR SRY box-2 OR SOX2”. Two independent investigators screened the retrieved documents by reviewing the article titles, abstracts, or full texts according to the inclusion and exclusion criteria. The review articles and the references of selected articles were also screened to identify additional eligible studies.

Inclusion criteria: (1) the histologic type of the tumors was NSCLC and if one study containing multiple types of lung cancer, only the data related to NSCLC was included; (2) evaluating the associations of SOX2 and Nestin DNA amplification and/or protein expression with clinicopathological features and OS; (3) peer reviewed papers that have been published as full texts; (4) the language was limited as English; (5) if mutiple studies contained overlap or duplicated data, only the study with larger sample size was included. Exclusion criteria: (1) the frequency of patients with positive/negative/high/low DNA amplification and protein expression was not specific to clinicopathological features; (2) study with insufficient data; (3) abstracts, letters, or review articles.

All the statistical analyses were carried out with the software Stata 12.0 (StataCorp, College Station, TX, USA). The crude odds ratios (ORs) with 95% confidence intervals (95% CIs) were calculated to estimate the associations of DNA amplification and protein expression of SOX2 and Nestin with clinicopathological features of NSCLC. The crude hazard ratios (HRs) with 95%CIs were used to assess their clinical significance in predicting prognosis of NSCLC. The statistical significant level was determined by Z-test with P value less than 0.05. If the prognosis was only presented by a Kaplan-Meier plot curve, HR and its 95%CI were calculated according to previous reports [59, 60]. Briefly, the KM plot curves were read by Engauge Digitizer version 2.11 and HR was estimated by the calculation spreadsheet. The spreadsheet could be freely downloaded from http://www.trialsjournal.com/content/supplementary/1745-6215-8-16-s1.xls. Inconsistency was solved by discussion. The heterogeneity among studies was explored using the chi-square based on Q statistic test. If P > 0.1 or I2 < 50%, fixed effects model was used to calculate the pooled OR/HR. Otherwise, random-effects model was used [61]. Sensitivity analysis was also conducted to evaluate stabilities of pooling results by omitting studies that brought heterogeneity or publication bias. Potential publication bias was checked by Begg’s funnel plots and Egger’s test [62, 63].

This study was supported by the grants from National Natural Science Foundation of China (No.81301868) and Higher Educational Science and Technology Program of Shandong Province (No.J15LK04).