Objectives: Chronic inflammation and abnormal cholesterol metabolism are involved in the pathogenesis of gallbladder stone disease (GSD) and that of prostate cancer in experimental studies. We assessed the association between GSD and prostate cancer in this population-based study.

Materials and Methods: We identified 9496 patients who were diagnosed with GSD between 1998 and 2011 from Taiwan’s Longitudinal Health Insurance Database 2000 as the study cohort. We randomly selected 37 983 controls from the non-GSD population and used frequency matching by age, sex, and index year for the control cohort. All patient cases were followed until the end of 2011 to measure the incidence of prostate cancer.

Conclusion: GSD is associated with an increased risk of prostate cancer, and the risk increases with the time of follow-up after a diagnosis of GSD.

Gallbladder stone disease (GSD) is a worldwide disease; its prevalence increases with socioeconomic development, and it affects approximately 10% of the adult population in Western countries and 5% of the adult population in Taiwan [5]. Furthermore, the prevalence of GSD is expected to increase with the increasing incidence of the metabolic syndrome, lifestyle westernization worldwide, and widespread use of ultrasound in clinical practice [6, 7].

Table 1: Comparison of demographics and comorbidity between gallbladder stone disease patients and controls

§: The urbanization level was categorized by the population density of the residential area into 4 levels, with level 1 as the most urbanized and level 4 as the least urbanized. 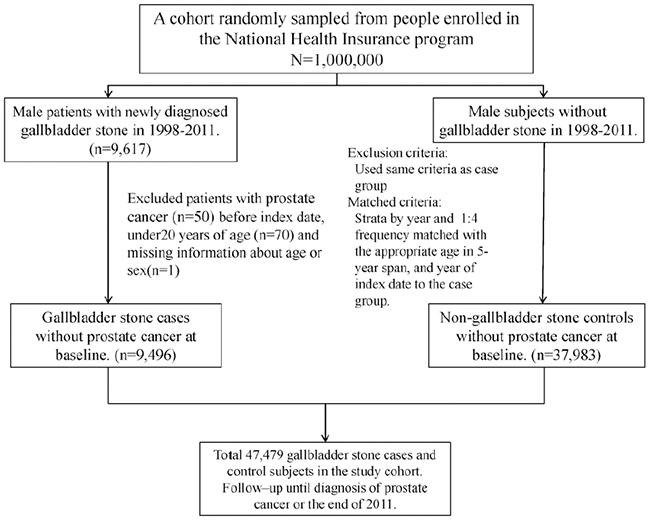 Figure 1: A flow chart to summarize the study design and the subjects’ selection in this study. 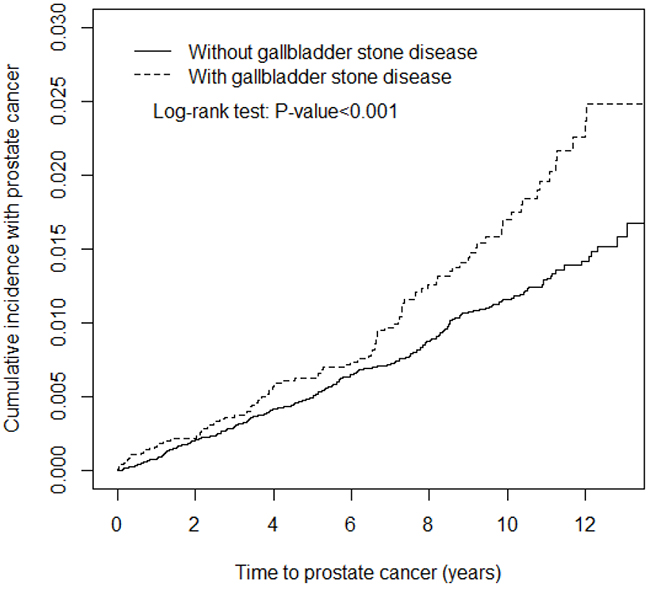 Table 2: Comparison of incidence densities of Prostate cancer between patients with and without gallbladder stone disease stratified by demographic characteristics and comorbidity

§: The urbanization level was categorized by the population density of the residential area into 4 levels, with level 1 as the most urbanized and level 4 as the least urbanized.

Comorbidity&: Only to have one of comorbidities (including hyperlipidemia, diabetes, hypertension, BPH, urinary stones, urinary tract infection, obesity, asthma, CAD, COPD, and stroke) classified as the comorbidity group

Regarding the trends in prostate cancer development after a GSD diagnosis, the risk of developing prostate cancer increased progressively with an incremental duration of follow-up, particularly after 9 years of follow-up (aHR = 1.95, 95% CI = 1.74-2.19) (Table 4).

We observed that 62.6% of the patients with GSD were older than 50 (mean: 56.4 ± 15.8) years, and GSD was more prevalent in the patients with white-collar jobs (48.1%) and in those living in ≥ level 2 urbanized areas (59.2%). The aging process is accompanied by increased biliary cholesterol secretion, decreased activity of cholesterol 7 α hydroxylase, decreased bile salt synthesis, impaired gallbladder motility, and increased exposure time to lithogenic factors [21, 22]. Westernized dietary habits and sedentary lifestyles may explain why GSD was more prevalent in the subjects with white-collar jobs and living in more urbanized areas [6, 23].

Our results suggest the patients with GSD had more comorbidities. A low serum high density lipoprotein cholesterol (HDL-C) concentration can increase biliary cholesterol secretion, whereas a high triglyceride level can result in supersaturated bile and impaired gallbladder emptying [24, 25]. Insulin resistance with hyperinsulinemia can increase biliary cholesterol secretion, and hyperglycemia can impair both hepatic bile acid secretion and gallbladder emptying [26, 27]. Hypertension can impair gallbladder contractility by activating the sympathetic nervous system [28]. Circulating inflammatory cytokines induced by BPH, urinary stones, and urinary tract infection may increase the risk of GSD [29].Obesity can enhance hepatic cholesterol synthesis and biliary cholesterol secretion [30]. In addition to smoking that can reduce the secretion of prostaglandin and mucus in the gallbladder, chronic inflammation from both asthma and COPD can also increase the risk of GSD [7, 28]. The association between GSD and cardiovascular disease (CVD) is due to cholesterol supersaturation in GSD and cholesterol deposition in atherosclerotic plaque [31, 32].

According to our analysis, increased prostate cancer risk was associated with GSD, aging, white-collar and blue-collar jobs, the highest urbanization level (level 1), hyperlipidemia, and BPH (Table 3). Dysplastic lesions require decades to evolve into prostate cancer, and the reported incidence of prostate cancer for men has increased 100 folds from fourth decade to seventh decade [33, 34]. Westernized dietary habits and sedentary lifestyles may explain why prostate cancer was more prevalent in the subjects with white- and blue-collar jobs and living in the most urbanized areas as high meat intake can induce structural DNA damage in the prostate and physical activity can decrease low-grade inflammation to reduce prostate carcinogenesis [35, 36]. Cholesterol over-accumulation in the cell membrane may facilitate procarcinogenic cell signaling in the prostate [37, 38]. Aging is a common risk factor for BPH and prostate cancer. In addition to local inflammation in the prostate that may induce carcinogenesis, patients with BPH may seek more medical consultations and thus have more opportunities for prostate cancer screening [4, 39].

Cholesterol metabolism and chronic inflammation are reported to be the major pathophysiological mechanisms for the association between GSD and prostate cancer [8, 9]. Biliary cholesterol supersaturation contributes to the development of GSD, and an abnormal cholesterol metabolism predisposes people to developing prostate cancer by promoting tumor growth through transducing signals, inhibiting apoptotic signals, and stimulating malignant potentials [8, 37, 38]. Moreover, circulating cholesterol is a component of androgen, which can increase the proliferation of prostate cancer cells [9]. GSD can activate chronic inflammation in the body by repeatedly irritating the gallbladder mucosa. The influence of cytokine gene polymorphisms on the antitumor immune response and tumor angiogenesis of prostate cancer is supported in the literature [9, 10]. Regarding the chronic inflammatory process, GSD and prostate cancer share several inflammatory genes, such as interleukin-8 and vascular endothelial growth factor A [9, 10]. Interleukin-8 is involved in neutrophil chemotaxis, whereas vascular endothelial growth factor A increases vascular permeability, angiogenesis, cell growth and migration, and apoptosis.

Our study had several strengths. First, it is the largest population-based study on the association between GSD and prostate cancer, and a longitudinal database with a 14-year observation period for a representative cohort of 1 000 000 residents was used to examine the association between GSD and the subsequent development of prostate cancer. Second, the recruited patients were sampled from the approximately 99% of Taiwan residents who are covered by the Taiwan NHI program.

Our study also had several limitations. First, we should acknowledge the evidence derived from this retrospective cohort study is generally of lower methodological evidence than that from randomized controlled trials because a retrospective cohort study is subject to many biases due to lack of the necessary adjustments for possible confounding factors. For adjustment, we used COPD diagnosis, obesity, and occupation and urbanization level to replace smoking habits, BMI, and socioeconomic status, respectively. GSD was consistently related to prostate cancer development according to multivariable Cox proportional hazards regression. However, the association between GSD and prostate cancer requires further studies to ascertain this association is an epiphenomena or a causal relationship. Second, the risk of GSD and prostate cancer might have been underestimated in our study if the patients did not seek medical consultation. However, the NHI program covers more than 99% of Taiwan’s population, and the accessibility and affordability of health care are high in Taiwan. Finally, we could not individually review the medical records to validate the diagnosis of GSD and prostate cancer. However, the NHIRD covers a highly representative population of Taiwan because the reimbursement policy is universal and the government is the only buyer. All insurance claims should be scrutinized by medical reimbursement specialists and peer reviewed according to the standard diagnosed criteria in the study. The doctors or hospitals will face a lot of penalties if they made wrong diagnoses or coding. The diagnoses of GSD and prostate cancer based on ICD-9 codes in this study should be highly reliable through the accessibility and affordability of NHI program, high sensitivity and specificity of ultrasound in the diagnosis of GSD, and the linkage to the registry of Catastrophic Illness Certificate. In addition, some related studies about GSD or prostate cancer with the same diagnosed method and criteria by ICD-9 coding were already been published [18, 40].

In conclusion, our population-based cohort study indicates that GSD is associated with an increased risk of developing prostate cancer. The risk of prostate cancer increased with the time of follow-up after a diagnosis of GSD, particularly after 9 years of follow-up. However, further studies are required to clarify whether GSD is a causal risk factor for prostate cancer.

A retrospective cohort study was conducted using registration and claims data sets from 1998 to 2011 obtained from the LHID2000.The Taiwan National Health Insurance (NHI) program is a universal, single-payer, and compulsory health insurance system with more than 99% population coverage for 23 million Taiwanese residents and more than 97% of the hospitals and clinics contracted (http://www.nhi.gov.tw/english/index.aspx) [15]. The LHID2000 contains comprehensive health care data on ambulatory care claims, inpatient claims, and the prescriptions of 1 000 000 randomly selected insured beneficiaries from National Health Insurance Research Database (NHIRD) enrollment record. The data of NHIRD (http://w3.nhri.org.tw/nhird//date_01.html) are maintained in the National Health Research Institutes (NHRI) (http://nhird.nhri.org.tw/), which is established by the government as a nonprofit foundation. All encrypted data were deposited in an appropriate open and public repository, and the researchers can use the database for research after approval of formal application [16, 17]. The Ethics Review Board of China Medical University and Hospital in Taiwan approved this study (CMUH104-REC2-115). The diseases were coded according to the International Classification of Diseases, Ninth Revision, Clinical Modification (ICD-9-CM) diagnosis codes, 2001 edition.

Male patients aged ≥20 years with newly diagnosed GSD (ICD-9-CM codes 574.0, 574.1, 574.2, 574.6, 574.7, 574.8, 574.9) from 1998–2011 were identified using the LHID2000. The date of GSD diagnosis was defined as the index date. Patients with a history of prostate cancer (ICD-9-CM code 185) were excluded. The non-GSD cohort consisted of patients randomly selected from the LHID2000 without a GSD history. For each GSD case, 4 men without GSD were randomly selected as the control cohort through frequency matching according to sex, age (every 5-y span), and the index date year. The same exclusion criteria were also applied to non-GSD controls. Figure 1 provided a flow chart to summarize the study design and the subjects’ selection in this study.