The concept of negative lymph node (NLN) counts has recently attracted attention as a prognostic indicator in various cancer. However, the correlation between NLN counts and patient prognosis in the setting of gastric cancer is not fully studied. Surveillance, Epidemiology, and End Results Program (SEER)-registered gastric cancer patients were used for analysis in this study. Clinicopathological characteristics, including race, age, gender, and tumor stage, grade, and cause specific survival were collected. Univariate and multivariate Cox proportional hazards model were used to assess the risk factors for survival. As results, X-tile plots identified 3 and 9 as the optimal cutoff value to divide the patients into high, middle and low risk subsets in terms of cause specific survival, and NLN was validated as independently prognostic factor in mulivariate Cox analysis (P < 0.001). Further analysis showed that NLN was a prognosis factor in each N stage. Collectively, our study results firmly demonstrated that the number of NLNs was an independent prognostic factor for gastric cancer patients, and together with the N stage, it could provide more accurate prognostic information than the N stage alone.

Gastric cancer (GC) is one of major cause of cancer related death worldwide because of its poor prognosis [1]. Surgical resection is the primary therapy option that offers the only curative chance for GC and lymph node status was a strong predictor for patients with GC after surgical resection. Although it has been shown that a 15-node minimum has been endorsed as a consensus standard for proper tumor stage and associated with a good survival outcome in patients treated with gastrectomy for GC [2]; However, a subgroup of them die of recurrence and metastases. In fact, the node-positive patients with GC are heterogeneous and the prognosis of these patients cannot be stratified by the node-stage only [3-5]. In view of these, pinpoint of prognostic factors, especially a common clinicopathological factor, for recurrence and metastasis would allow to find patients at high risk that may benefit from adjuvant chemotherapy or intensive care, usually proposed to node-positive GC patient only [6]. The concept of negative lymph node (NLN) counts has recently attracted attention as a prognostic indicator in colon [7, 8], gastric [9], esophageal [10], and cervical [11]. However, the correlation between NLN counts and patient prognosis in the setting of GC is not fully studied. Therefore, the aims of this retrospective study is to explore the effect of NLN counts on the long-term survival outcome in patients with GC after surgical resection. GC.

In the present article, the Surveillance, Epidemiology, and End Results (SEER)-registered database for GC is analyzed, aimed to investigate role of NLN count on node-positive GC patients’ survival outcomes after surgical treatment.

We first treated NLN count as a continuous variable, and it was validated as a significant prognostic factor by univariate Cox analysis (χ2 = 363.387, P < 0.001). Next, X-tile plots were constructed and the maximum χ2 log-rank value of 490.428 (P < 0.001) was produced, applying 3 and 9 as the optimal cutoff value to divide the cohort into high, middle and low risk subsets in terms of GCSS. (Figure 1). There was an absolute 29.7% improvement in 5-year GCSS if ≥9 NLNs were analyzed compared with those who had <3.

Figure 1: X-tile analysis of survival data from the SEER registry. X-tile analysis was performed using data from SEER database, which were equally divided into training and validation sets. X-tile plots of the training sets are shown in the left panels, with plots of matched validation sets shown in the smaller inset. The optimal cut-point highlighted by the black circle in the left panels is shown on a histogram of the entire cohort (middle panels), and a Kaplan-Meier plot (right panels). P values were determined using the cutoff point defined in the training set and applying it to the validation set. Figure 1 shows the optimal cutoff point for the lymph node positive patients (number 3 and 9, χ2=490.428, P < 0.001).

Table 2: Univariate and multivariate survival analyses for evaluating the influence of the number of NLNs retrieved on GCSS in node positive gastric cancer 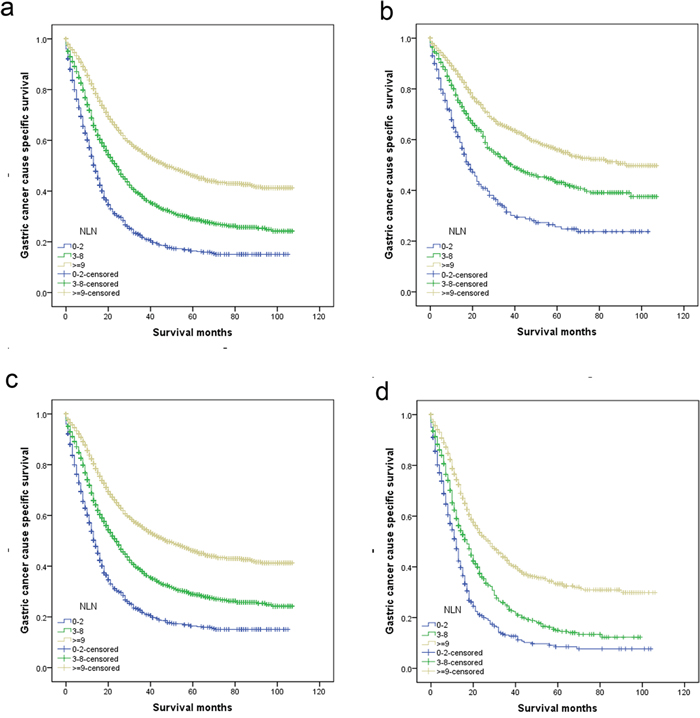 Table 3: Univariate and multivariate analyses of NLN count on GCSS based on different cancer stage

P-values refer to comparisons between two groups and were adjusted for age, race, pathological grading, and tumor stage as covariates.

Despite advances in early diagnosis, operative technique, and adjuvant therapies, radical gastrectomy remains the only potentially curative treatment for GC. However, even after surgical management, the 5-year overall survival rate is only about 20% in series from the United States [14]. It is generally accepted that gastrectomy with dissection of the regional lymph nodes would improve the 5-year survival of patients with GC cancer [15, 16]. At least of 15 lymph nodes should be retrieval from surgical specimens for accurate postoperative stage according to the 7th edition tumor-node-metastasis (TNM) staging system for GC [5, 17, 18]. The N category is defined by the number of positive nodes is one of the most important predictors of survival outcomes in patients with GC and has been included as a staging parameter in the 7th edition UICC/AJCC TNM staging system for GC [5, 18]. However, the node-positive patients GC are heterogeneous and the prognosis of these patients cannot be accurately stratified by the node-stage system alone [5]. The number of NLNs has been confirmed as an independent prognosis factor in colon [7, 8], gastric [9], esophageal [10], et al. Taking account of these considerations, the aim of present study was to investigate the prognostic value of NLN count in the patients with node-positive GC. In this large population based study, our results demonstrated that the NLNs count was an independent prognosis factor for GC, and even in subgroup analysis of N1, N2, and N3 stage patients, increased numbers of NLNs were associated with improved GCSS. The number of NLNs had a weak or negligible correlation with PLN counts, which means that it was a predictor independent of current metastatic LNs count-based staging.

Several hypotheses have been proposed to explain the underlying mechanism for the relationship between the number of NLNs and survival. The first hypothesis involves stage-migration. The extent of lymphadenectomy for curative GC gastrectomy has been debated for several decades; however it is generally accepted that more radical surgery is associated with better lymph node examination [9, 19]. Our study indicated that there was a significant relationship between the number of total LN and NLN counts; the more LN examined, the more likely that it reflects the true stage, and lower nodal counts may increase the risk of under-staging, and a higher number of LNs examined was linked with more accurate N stage classification. Second, the surgeon is a technician. Theoretically, a great number of retrieved NLNs indicate an authoritative surgical curability and quality of surgical care or pathology. The isolated tumor cellsin NLN are though as the main source that could lead to poor survival outcomes of GC patients [20-22]. Third, NLN may simply reflect a host lymphocytic reaction to the tumor [23], and lymphocytic reaction to tumor cells has been associated with longer survival in cancer patients [24, 25].

The results of this study must be interpreted in the light of certain limitations. First, the quality of surgical care or pathological technique may affect LN harvest, we cannot adjust these in our analysis. Second, distant lymph node metastases always classified as distant metastases and therefore the surgery were regarded as palliative resection, and should be excluded from this study. But for SEER data lacks such information, we cannot adjust for this. Third. SEER database lacks information of therapy options (radical resection or palliative therapy), subsequent therapy, co-morbidities and recurrence, which may also impact patients’ survival outcome.

Despite these potential limitations, our study results firmly demonstrated that NLNs counts was an independent prognostic predictor for patients with GC after gastrectomy, and together with the N stage, it provides more accurate prognostic information than the N stage alone.

Data were obtained from the publicly available version of the SEER database, which consisted of 18 population-based cancer registries covering approximately 28% of the population of the United States. The National Cancer Institute's SEER*Stat software (Surveillance Research Program, National Cancer Institute SEER*Stat software, www.seer.cancer.gov/seerstat; Version 8.1.5) was used to access the database.

We searched for patients diagnosed between 2004 and 2012 with single primary GC. Histological types were limited to adenocarcinoma, mucinous adenocarcinoma, and signet ring cell carcinoma. Patients were excluded if age at diagnosis was less than 18 years, had more than one primary cancer but the gastric wasn’t the first one, had no surgical resection or palliative resection (patients with distant metastasis), had undefined TNM stage, had unknown cause of death or unknown survival months.

Patients’ demographic and clinicopathological variables, including age, sex, race, tumor grade, histologic type, T or N stage, primary site, tumor metastatic status, treatment type, reginal lymph node retrieval, reginal lymph node metastasis, et al, were retrieved from the SEER database. The primary endpoint in this study was GC cause specific survival (GCSS), defined as the period from diagnosis to death due to GC. Data of patients who died from other causes or who were alive on the date of their last follow-up were censored.

The LNs cutoff points were analyzed using the X-tile program (http://www.tissuearray.org/rimmlab/), which identified the cutoff with the minimum P values from log-rank χ2 statistics for the categorical LNs in terms of survival [26, 27]. A comparison of the categorical variables between N stage subgroups was conducted using Pearson's χ2 test. Continuous variables were compared using the Mann-Whitney U test. The Kaplan-Meier method was used to calculate the actual survival rate and to plot survival curves, followed by the log-rank test for clinical and histological variables. The Cox proportional hazard regression model was used to identify the variables that could independently influence survival in GC. Hazard ratios (HRs) and 95% confidence intervals were calculated, with an HR of <1.0 indicating survival benefit. All statistical analyses were performed using SPSS ver.19.0 (SPSS Inc., Chicago, IL), and a value of P < 0.05 indicated statistical significance. All tests were 2 sided with p < 0.05 defined as statistically significant.

17. Cuschieri SA, Hanna GB. Meta-analysis of D1 versus D2 gastrectomy for gastric adenocarcinoma: let us move on to another era. Annals of surgery. 2014; 259:e90.