Deubiquitination via deubiquitinating enzymes (DUBs) has been emerged as one of the important post-translational modifications, resulting in the regulation of numerous target proteins. In this study, we screened new protein biomarkers for adipogenesis, and related studies showed that ubiquitin specific protease 19 (USP19) as a DUB is gradually decreased during adipogenesis and it regulates coronin 2A (CORO2A) as one of the components for the nuclear receptor co-repressor (NCoR) complex in some studies. The regulation of CORO2A through the deubiquitinating activity of USP19 affected the transcriptional repression activity of the retinoic acid receptor (RAR), suggesting that USP19 may be involved in the regulation of RAR-mediated adipogenesis.

Deubiquitination is the opposite process of ubiquitination and is mediated by deubiquitinating enzymes (DUBs) [1]. DUBs have the ability to detach ubiquitin molecules from ubiquitinated substrates, changing the fate of these substrates, including their activity or stabilization. Accordingly, DUBs have been thought to be pivotal mediators in diverse cellular systems including signal transduction, cell cycle regulation, cell proliferation, and cell death [2]. Thus far, approximately 100 DUBs have been identified and grouped into at least five classes, ubiquitin specific proteases (USPs), ubiquitin carboxy-terminal hydrolases (UCHs), ovarian-tumor proteases (OTUs), Machado-Joseph diseases, and JAB1/MPN/MOV34 metalloenzymes (JAMMs) [2].

USP19 is a subfamily of the USPs which has the most number of DUBs (~55 USPs). Several studies have suggested that USP19 has diverse roles in cellular processes, including cell cycle regulation, the response to hypoxia, and muscle atrophy [3–5]. The noncatalytic activity of USP19 has been described. For example, USP19 increased the stability of the cellular inhibitors of apoptosis 1 (c-IAP1) and c-IAP2 [6]. USP19 was shown to be involved in the unfolded protein response (UPR) and in the ER-associated degradation (ERAD) pathway [7]. These results indicate that USP19 can mediate a variety of mechanisms within cells.

Several studies have revealed the presence of histone deacetylase 3 (HDAC3), G-protein pathway suppressor 2 (GPS2), transducin β-like-1 (TBL1), TBL-related-1 (TBLR1), Kaiso, TAK-binding protein 2 (TAB2), and coronin 2A (CORO2A) in the nuclear co-repressor (NCoR) complex [8–12]. The NCoR co-repressor has critical functions in nuclear receptor-mediated gene repression by interacting with partners such as the thyroid hormone receptor (TR) and the retinoic acid receptor (RAR). NCoR is phosphorylated by the Akt-linked phosphorylation on Ser1450 to induce protein folding, and misfolded and degenerated NCoR are associated with acute myeloid leukemia [13]. However, the role of other post-translational modifications of co-suppressor proteins, such as deubiquitination, in the elongation of their half-life is poorly understood. Several studies have shown that THR and RAR recruit NCoR co-repressor complexes, and a domain-base approach showed that corepressor-nuclear receptor (CoRNR) box motifs ((I/L)XX(I/V)I) on the C-terminal domain of the NCoR complex are important to bind RAR [14–19]. The peroxisome proliferator-activated receptor-γ (PPAR-γ) is a well-known key factor of adipose tissue in glucose metabolism, and it has a critical role in adipocyte differentiation [20].

Coronin was first identified as a soluble actin-binding protein of Dictyostelium discoideum [21]. Since then, several studies have evaluated actin-related roles of coronin and found that several coronin isoforms exist. These can be classified into three different types (Types I, II, and III) by phylogenetic analysis [22]. Previous results of expression analysis with quantitative real-time PCR revealed that the highest expression of CORO2A, also known as IR10, occurred in the testis and that its expression was also relatively high in the cortex, duodenum, lymph nodes, ovaries, and uterus [23]. Although the biological functions of CORO2A are not well understood, a recent study demonstrated that it is a component of the NCoR co-repressor complex [24]. Several studies showed that the NCoR and SMRT repressed PPAR-γ gene transcription [25]. Moreover, the NCoR co-repressor was associated with the phosphorylation of PPAR-γ in adipocyte differentiation, and knock-down of the NCoR complex promoted adipogenesis [25]. Adipogenesis studies have been accessed to obesity research. Here, we screened the adipogenesis marker proteins in molecular mechanism studies. The results suggest that USP19 may be associated with the transcriptional regulation of RAR via CORO2A as one of the components for the NCoR complex during the adipogenesis.

Since the control of DUBs in adipogenesis is unknown yet, we screened USPs during adipogenesis using a PCR-based approach. To identify the differential expression pattern of 55 USPs and Cyld during adipocyte differentiation, insulin-treated 3T3-L1 cells were used for RT-PCR (Figure 1 and Table 1). The induction of adipogenesis by insulin resulted in significant increase for the expression of AdipoQ, Glut4, Leptin, and Ppar-γ as adipocyte-specific markers time dependently (Figure 1A-1C). Moreover, we found up-regulated and down-regulated USPs in differentiated adipocytes (Supplementary Data S1). We next performed a real-time PCR-based assay to estimate and confirm the expression of USPs in a time dependent manner after insulin treatment during adipogenesis. The results indicate that the expression of USP19, USP42, and USP54 mRNA was significantly changed (Figure 2A and 2B). These findings suggest that the transcription levels of USP19, USP42, and USP54 were changed during adipogenesis. 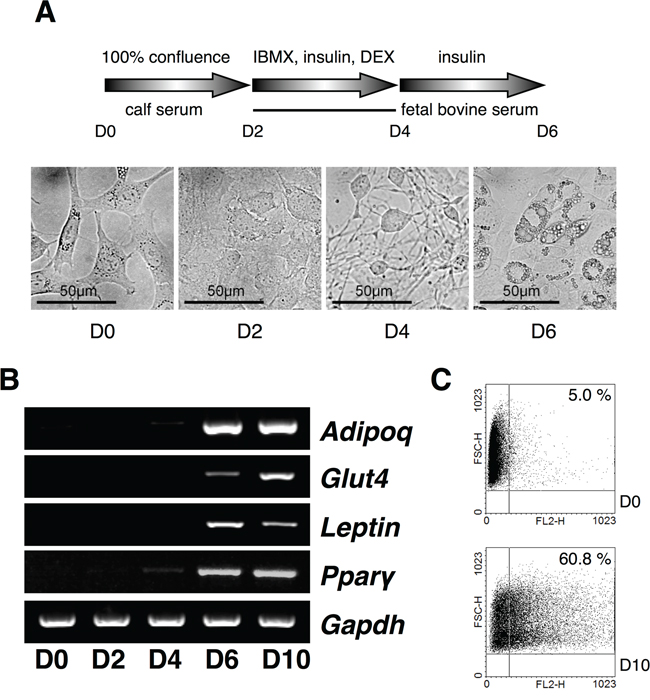 Figure 1: Expression analysis of USPs in adipocyte differentiation. A. A scheme for the induction of adipocytes with IBMX, DEX, and insulin from 3T3-L1 cells, and the cell morphology was checked every a couple of days at original magnification 40×. B. Primers for Adipoq, Glut4, Leptin, and Ppar-γ were used for RT-PCR using cDNA from each phase of the differentiating adipocytes. C. The differentiated adipocytes were assorted and analyzed by fluorescence-activated cell sorting (FACS). 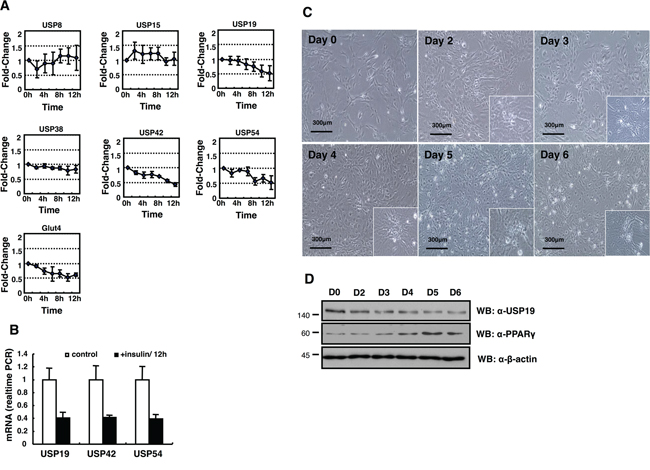 Figure 2: Expression profiling of DUB genes in the insulin-treated 3T3-L1 cells. A. USP8, USP15, USP19, USP42, and USP54 mRNA expressions were measured by real-time PCR as indicated. B. All data are performed three independent experiments with each insulin treated 3T3-L1 cells, and represent a means ± s.e.m. C. Primary MEFs induced adipocytes with IBMX, DEX, and insulin. Cell morphology was examined by a microscopy with 10× magnification. The scale bar represents 300 μm. D. Cell lysates were obtained from MEFs as indicated days, and analyzed by immunoblotting with an anti-USP19, an anti-PPAR-γ, and an anti-β-actin antibody.

CORO2A is a novel binding partner for USP19

The expression of USP19 was most significantly suppressed in adipocyte differentiation (Figure 2). In addition, we monitored the expression of USP19 during adipogenesis processing with primary mouse embryo fibroblasts (MEFs) to confirm previous results (Figure 2A and 2B). While adipocytes were differentiated, the expression level of USP19 was decreased (Figure 2C and 2D) and the expression of PPAR-γ as a marker protein for adipogenesis was increased. To gain insights into USP19 function in adipogenesis, we performed immunoprecipitation and MALDI-TOF-MS analyses to identify the binding partners of USP19. Purified binding proteins from Myc-tagged USP19-overexpressed 293T cells were separated with SDS-PAGE followed by silver staining and mass spectrometry (Figure 3A). The result of the mass spectrometry analysis of differentially appearing protein band revealed the score values, molecular weights, and partial amino acid sequences for CORO2A (Figure 3B and 3C). The results suggest that CORO2A is an USP19 binding protein (Figure 3B and 3C). We next validated the association between USP19 and CORO2A, and the regulation of CORO2A by USP19. The 293T cells were transfected with Flag-tagged CORO2A and Myc-tagged USP19. Co-immunoprecipitation assay revealed that USP19 strongly binds with CORO2A (Figure 3D and 3E). We next evaluated the endogenous binding between CORO2A and USP19. As expected, CORO2A was detected by immunoprecipitation using an anti-USP19 antibody, and reciprocal immunoprecipitation with an anti-CORO2A antibody also brought down USP19 in non-cancer cells (293T and 3T3-L1 cells) and cancer cells (MCF7 cells) (Figure 3F–3H). These results show that the binding of CORO2A and USP19 was not dependent on both normal and cancer cells. Furthermore, USP19 can be a DUB for increasing the stability of CORO2A. 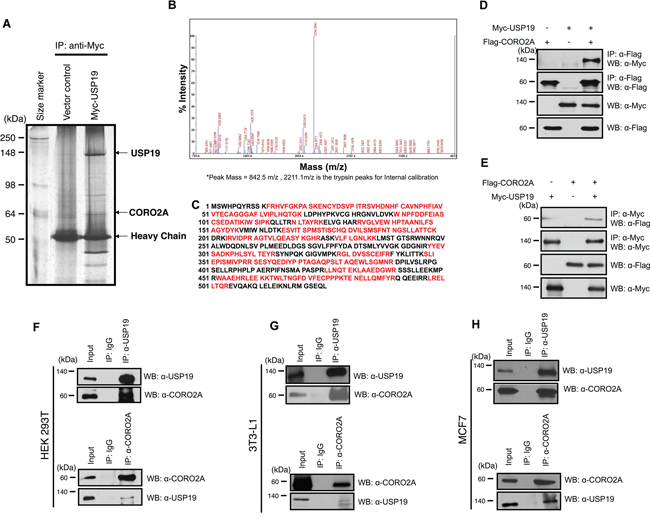 USP19 is associated with the ubiquitination of CORO2A 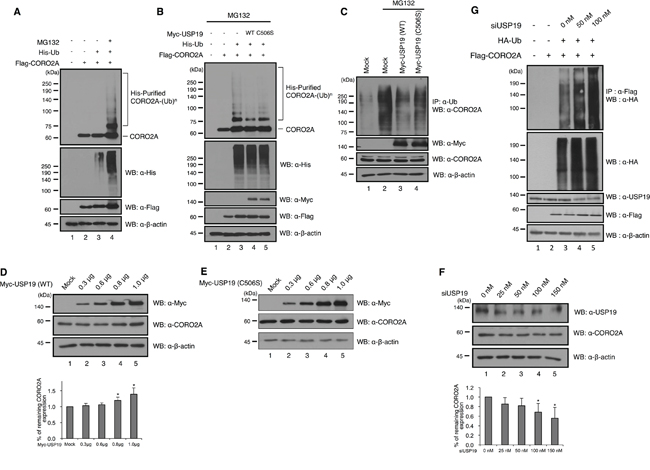 USP19 and CORO2A mediate the transcriptional repression of RAR

Figure 5: Effect of overexpression of CORO2A and USP19 on the transcriptional repression of RAR targeting elements. A. To confirm the dose dependent increase in Flag-tagged CORO2A in the MCF7 cells that contained the RARE reporter gene, immunoblotting with the same samples was performed with anti-Flag and anti-β-actin antibodies. B. The luciferase activity of RAR was gradually decreased in a dose dependent manner in response to a gradual increase in Flag-tagged CORO2A in the MCF7 cells. The average of six experiments is presented, and error bars denote the standard error mean (± s.e.m.). 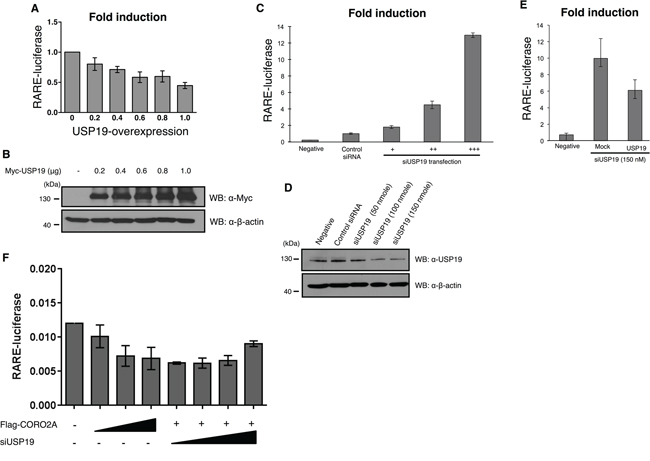 Several stimulation factors such as insulin, transforming growth factor-beta (TGF-β), fibroblast growth factor (FGF), and bone morphogenetic proteins (BPMs) are required for gene expression during adipogenesis. The manner in which DUBs coordinate and regulate adipocyte gene expression or protein degradation remains unclear. In the present study, we investigated specific adipocyte differentiation marker proteins. During adipogenesis, the mRNA levels of USP19, USP42, and USP54 were significantly changed (Figure 1 and Figure 2). To investigate the molecular mechanisms of USP19 in the deubiquitination system during adipogenesis, the binding substrates of USP19 were screened (Figure 3 and Figure 4). CORO2A, an NCoR complex protein, was isolated with an anti-USP19 by immunoprecipitation. And USP19 deubiquitinated CORO2A (Figure 4), suggesting that USP19 might have function to stabilize NCoR co-repressor complex in cells.

CORO2A was identified as a component of the NCoR complex, and it has been suggested that CORO2A has a role in transcriptional repression of its target genes through the regulation of NCoR turnover [27]. NCoR co-repressor complexes are known to play a role in the transcriptional repression of target genes via nuclear receptors, including RAR and THR, and other molecules including Sin3, HDAC1, HDAC3, TBL1/R1, GPS2, Kaiso, JMJD2A, and CORO2A [8, 10, 12, 28–31]. RAR and retinoid X receptor (RXR), act as transcription factors encoded by genes containing RAR response elements (RARE) or RXR response elements (RXRE) [32]. Their binding influences the transcriptional repression of RAR, which is a binding partner of the NCoR complex [33]. For example, the transcriptional activation of RAR target genes was increased upon depletion of HDAC3 but not NCoR in RAR-expressing cells [33]. Overexpression of USP19 inhibited RARE transcription and knock-down of USP19 using siRNA showed dramatically increased transcription of RARE (Figure 5 and Figure 6), suggesting that USP19 increases the stability of CORO2A by DUB activity, and that binding of these two protein may be associated with the function of NCoR. Together, our results demonstrate the importance of the interaction between USP19 and CORO2A in the regulation of RAR, which is possibly involved in adipogenesis. Tip60, which is a factor for adipocyte differentiation, was regulated by USP7, and their binding was associated with adipogenesis [37]. Fatty acid synthase (FAS), a regulator for adipocyte differentiation, is also stabilized by USP2 [38]. Clinically, the modulation of retinoic acid receptors (RARs) by NCoR is regarded as a potential target for development of metabolic diseases and anti-cancer drugs. Up to date, only few studies were performed for adipogenesis-related DUBs. Based on our results, we screened several USPs that may have important roles in adipocyte differentiation. Our molecular mechanism study revealed that USP19 has a role as a co-repressor in the transcriptional repression of RAR via the stabilization of CORO2A by its DUB activity, and suggests the possibility that USP19 may be a potent target for anti-cancer and metabolic diseases.

We would like to thank members of Baek laboratory, and Jia Choi and Jee-In Choi for their help with the expression analysis in adipogenesis. This research was supported by Basic Research Program through the National Research Foundation of Korea (NRF) funded by the Ministry of Education, Science and Technology (2013-0141).

33. Atsumi A, Tomita A, Kiyoi H, Naoe T. Histone deacetylase 3 (HDAC3) is recruited to target promoters by PML-RARalpha as a component of the N-CoR co-repressor complex to repress transcription in vivo. Biochem Biophys Res Commun. 2006; 345:1471-1480.