Autophagy is an essential catabolic pathway that degrades proteins or other cellular components within the lysosome [1]. The physiologic function of autophagy is well known to maintain homeostasis in mammalian cells. Autophagy also acts as a survival mechanism for cancer cells in response to various stresses during tumor progression and radiotherapy or chemotherapy [2–4]. Because the inhibition of autophagy has been experimentally demonstrated to restore therapeutic sensitivity and enhance cancer cell death [2–6], several autophagy inhibitors have been clinically tested in cancer patients [7, 8]. Although these early-phase clinical trials have reported positive data of antitumor benefits [7, 8], the role of autophagy in mediating the progression and therapeutic resistance of cancer remains unclear.

In past decades, a stem cell-like subpopulation known as “cancer stem cells” (CSCs) has been found in various types of malignant tumors. Although lacking consensus, some cell surface markers for hematopoietic stem cells, such as CD44 and CD133, have been popularly used for the identification/purification of CSCs [9, 10]. These CSCs are thought to demonstrate therapeutic resistance and play critical roles in the recurrence and metastasis of cancer [9]. Autophagy has also been highly observed in CSCs [11–13], and the induction of autophagy can contribute to radio-resistance in glioma stem cells [11]. Furthermore, the relative lower reactive oxygen species (ROS) level in CSCs may confer the resistance to irradiation [14]. However, it has no consensus about the consequence relation between autophagy and radio-resistance of cancer cells [15]. 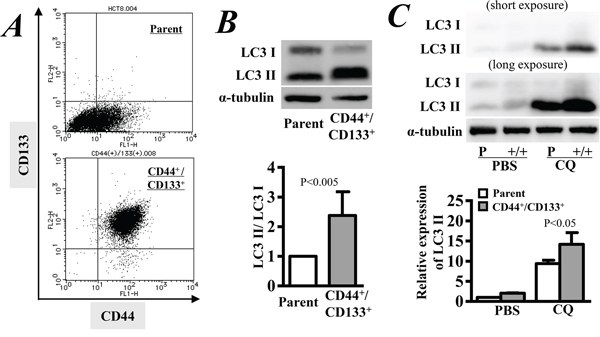 Figure 1: Autophagy activity in CD44+/CD133+ cancer stem cells. A. CD44+/CD133+ cancer stem cells were purified from the HCT8 human colorectal cancer cell line, and the purity was confirmed by flow cytometry. B. Western blot analysis was used to detect the expression levels of LC3-I and LC3-II, and the LC3-II/LC3-I ratio represents the extent of autophagy. C. Autophagic flux by inferring with LC3-II turnover by Western blotting in the presence and absence of a lysosomal inhibitor. Cells were incubated with 50 μM chloroquine (CQ) for 4 hrs. Parental cells without any treatment were used as the control of relative expression. PBS: Phosphate-buffered saline. The data are represented as the means ± SD from three independent experiments.

We exposed the cells to 5 Gy of γ-ray and then continued to incubate the cells for another 2 days. Both of the CD133+/CD44+ CSCs and parental cells continued growing slowly even after radiation exposure (Figure 2A). Western blotting showed a comparable level of cleaved PARP1 between the CD133+/CD44+ CSCs and parental cells, although radiation obviously induced the expression of cleaved PARP1 in both cell types (Figure 2B). 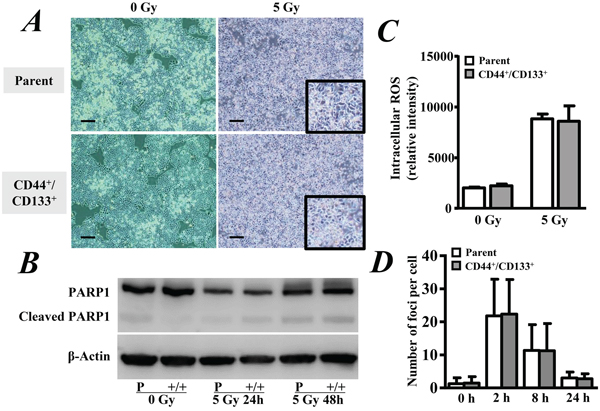 Figure 2: Radiation-induced cell damage. A. CD44+/CD133+ cancer stem cells and parental HCT8 human colorectal cancer cells were exposed to 5 Gy of γ-ray followed by incubation for another 2 days. The growth of cells was observed under a microscope with 40-fold magnification. Scale bar, 200 μm. B. Western blot analysis of the expression level of cleaved PARP1 in cells. C. Cells were labeled with 10 μM H2DCFDA for 10 min and then exposed to 5 Gy of γ-ray. The ROS level was evaluated by measuring the fluorescence intensity within cells. D. Cells were exposed to 5 Gy of γ-ray and then fixed at the indicated times. The number of γ-H2AX foci in each cell was counted under fluorescence microscopy, and the mean number of γ-H2AX foci per cell was calculated. The data are represented as the means ± SD from three independent experiments.

The ROS level was quantitatively measured by the fluorescence intensity after loading with H2DCFDA. Although radiation exposure significantly increased the ROS level in both the CD133+/CD44+ CSCs and parental cells 15 min after 5 Gy of γ-ray exposure (p < 0.05, Figure 2C), there was no significant difference between the two cell types (p > 0.05, Figure 2C).

Autophagy did not significantly contribute to radio-resistance

To further confirm the role of autophagy on the cytotoxic effect with or without radiation exposure, we silenced the expression of ATG7, a factor required for autophagy at the stage of autophagosome precursor synthesis. Transfection with ATG7 siRNA significantly decreased the protein level of ATG7 and the ratio of LC3-II/LC3-I expression in both CD133+/CD44+ CSCs and parental cells (p < 0.05, Figure 3A). Although a higher ratio of LC3-II/LC3-I expression was observed in CD133+/CD44+ CSCs than in parental cells, exposure to 5 Gy of γ-ray did not significantly change the expression of ATG7 and the ratio of LC3-II/LC3-I expression in all cells (Figure 3A). After knockdown of ATG7, the autophagic flux level was decreased in both of the CD133+/CD44+ CSCs and parental cells (Figure 3B). However, the autophagic flux level did not change after radiation in the two types of cells (Figure 3C). Figure 4: Cell growth and the cell cycle. Cells were treated with ATG7 siRNA and then incubated for 2 days. After autophagy was inhibited, cells were exposed to 5 Gy of γ-ray followed by incubation for another 2 days. A. Cell growth was observed under a microscope with 40-fold magnification. Scale bar, 200 μm. B. The cell cycle was measured by PI staining. 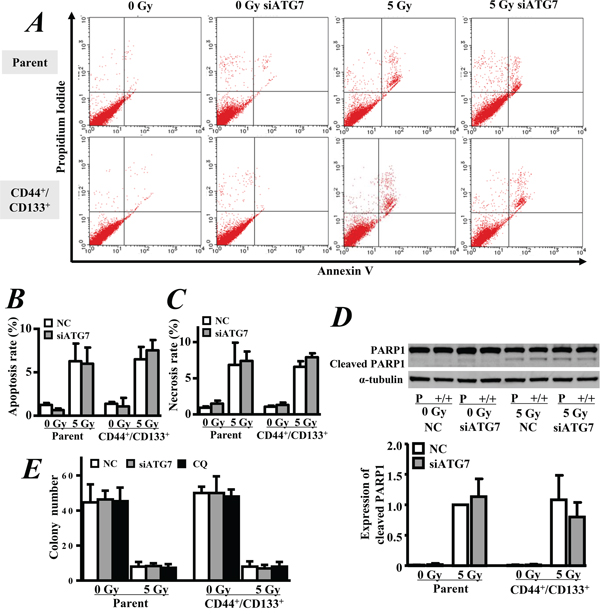 Figure 5: Apoptosis and clonogenic survival. Autophagy was inhibited by ATG7 siRNA for 2 days or 50 μM chloroquine (CQ) for 4 hrs. A. The cell apoptosis was measured by Annexin V/PI staining. B. Quantitative analysis of the apoptosis rate. C. Quantitative analysis of the necrosis rate. D. Western blot analysis of the expression of cleaved PARP1. Parental cells exposed to 5 Gy of γ-ray were used as the control of relative expression. E. Clonogenic survival assay. NC: negative control siRNA. The data are represented as the means ± SD from three independent experiments.

Colorectal cancer is the third most common cancer and fourth most common cause of cancer death globally [16]. In addition to colorectal surgery, additional chemotherapy or radiotherapy may prove beneficial as well [16]. Unfortunately, only approximately 20% of colorectal cancers achieve complete pathologic responses to chemotherapy, and radiotherapy seems to be beneficial in few cases, if any [17]. Therefore, many efforts have been made to improve the radio-sensitivity of colorectal cancer [18–20]. Because autophagy is generally considered a pro-survival mechanism of cells to stresses [2, 11, 21], the combination of irradiation with autophagy inhibition has also been clinically tested to improve the sensitivity of killing cancer cells [22, 23]. Complex factors, including the enhanced DNA damage response, ROS scavenging, autophagy, activation of developmental pathways, and microenvironmental stimuli, seem to be associated with the radio-resistance of cancer [24–28]. However, the precise mechanism underlying the radio-resistance of colorectal cancer remains incompletely understood.

Apoptosis is considered the principal cell death pathway elicited by radiotherapy, and radiotherapy may employ ROS to eradicate cancer cells [34]. DNA double-strand breaks (DSBs) represent important radiation-induced lesions, and impaired DSB repair provides the best available correlation with radio-sensitivity [35]. Although radiation exposure significantly increased the ROS level and damaged the cells, our data showed comparable radio-sensitivity between the CD44+/CD133+ CSCs and parental cells. Surprisingly, radiation did not significantly induce autophagy in both cell types, even if we exposed the cells to a higher dose (up to 20 Gy, data not shown). To further confirm the role of autophagy on radio-sensitivity, we tried to inhibit the autophagy pathway by silencing ATG7 and chloroquine [15, 36]. Again, the inhibition of autophagy in both cell types did not change the cell growth and radio-sensitivity.

It remains unknown why autophagy was not significantly induced by radiation and contributed to radio-sensitivity in our study. Actually, the role of autophagy in the radio-resistance of cancer cells is controversial [24, 37]. It has been reported that autophagy plays a cytoprotective role in the radiation of glioma stem cells [5, 11]. However, another study found that the radio-resistance of cancer cells is canonical autophagy independent [15]. More recently, Gewirtz has proposed that autophagy may functionally serve cytoprotective, cytostatic, cytotoxic, and nonprotective roles, depending on the cell types and conditions, as well as various stresses [38]. Therefore, enhanced autophagy activity in these CD44+/CD133+ CSCs may only serve in a nonprotective role in radiation.

The HCT8 human colorectal cancer cell line was used for experiments. Cells were maintained in RPMI 1640 medium (Wako, Japan) with 10% fetal bovine serum and 1% penicillin/streptomycin (Gibco, UK). Cells were cultured at 37°C in a humidified atmosphere of 5% CO2 and 95% air.

We measured the intracellular ROS level based on the oxidation of 2’, 7’-dichlorodihydrofluorescein diacetate (H2DCFDA, Molecular Probes Inc., USA) to form the fluorescent compound 2’, 7’-dichlorofluorescein (DCF). Briefly, cells were loaded with 10 μM H2DCFDA for 10 min. After washing, cells were exposed to 5 Gy γ-ray and then incubated at 37°C for 15 minutes. The fluorescence intensity was measured by a plate reader (VICTOR™ X3 Multilabel Plate Reader; PerkinElmer Inc., Waltham, Massachusetts, USA).

Immunofluorescence for γ-H2AX, a DNA damage and repair marker, was also evaluated. Briefly, cells were exposed to 0 or 5 Gy of γ-ray. At the indicated times after irradiation, cells were washed with cold PBS and fixed with 4% formalin for 10 min at room temperature. After washing three times with PBS, cells were incubated with a rabbit anti-human γ-H2AX polyclonal antibody (1:500 dilution, Abcam) overnight at 4°C. After washing three times with PBS, cells were incubated with an Alexa Fluor® 488 conjugated goat anti-rabbit secondary antibody (1:250 dilution; Molecular Probes Inc., USA) at room temperature for 2 hrs in the dark. The immunofluorescence for γ-H2AX in cells was examined on an Olympus fluorescent microscope, and the number of γ-H2AX foci per cell was counted under the microscope with 400-fold magnification. The mean number of γ-H2AX foci from more than 50 cells was calculated for statistical analysis.

siRNA specific to ATG7 (#6604S) and a control siRNA (#6568S) were obtained from SignalSilence (Cell Signaling Technology, Inc.). We seeded cells on 6-well plate (2×105 cells/well) 16 hrs before siRNA transfection. Transfection was performed using LipofectAMINE 3000 (Invitrogen) according to the manufacturer’s instructions. A total of 100 nmol/L of siRNA duplex was used for each transfection.

Cells were harvested as a single-cell suspension and fixed in cold 70% ethanol for 30 min at 4°C. After washing with PBS, 0.5 mL of FxCycle™ PI/RNase Staining Solution (Thermo Fisher Scientific, Inc.) was added for incubation. Flow cytometry analysis was performed using a FACSCalibur instrument (Becton Dickinson).

To evaluate the colony-forming ability after irradiation, we seeded cells into 6-well plates at a density of 100 cells/well. After overnight incubation, cells were exposed to 5 Gy of γ-ray, and the formation of colonies was quantified at 7 days after irradiation exposure. Colonies with over 50 cells were counted under an Olympus microscope.

Data are represented as the means ± SD. The statistical significance was determined by one-way analysis of variance (ANOVA) followed by Tukey’s test (Dr. SPSS II, Chicago, IL). A p value less than 0.05 was accepted as statistically significant.

This study was supported in part by a Grant-in-Aid from the Ministry of Education, Science, Sports, Culture and Technology, Japan, and collaborative Research program of the Atomic-bomb Disease Institute of Nagasaki University. The funder played no role in the study design, data collection and analysis, decision to publish, or preparation of the manuscript.