1Department of Obstetrics and Gynecology, Graduate School of Medicine, The University of Tokyo, Bunkyo-ku, Tokyo, Japan

The Warburg effect is a metabolic hallmark of cancer cells; cancer cells, unlike normal cells, exclusively activate glycolysis, even in the presence of enough oxygen. On the other hand, intratumoral heterogeneity is currently of interest in cancer research, including that involving cancer stem cells (CSCs). In the present study, we attempted to gain an understanding of metabolism in CSCs that is distinct from that in non-CSCs. After forming spheroids from the OVTOKO (ovarian clear cell adenocarcinoma) and SiHa (cervical squamous cell carcinoma) cell lines, the metabolites of these cells were compared with the metabolites of cancer cells that were cultured in adherent plates. A principle components analysis clearly divided their metabolic features. Amino acids that participate in tricarboxylic acid (TCA) cycle reactions, such as serine and glutamine, were significantly increased in the spheroids. Indeed, spheroids from each cell line contained more total adenylates than did their corresponding cells in adherent cultures. This study demonstrated that cancer metabolism is not limited to aerobic glycolysis (i.e. the Warburg effect), but is flexible and context-dependent. In addition, activation of TCA cycles was suggested to be a metabolic feature of CSCs that was distinct from non-CSCs. The amino acid metabolic pathways discussed here are already considered as targets for cancer therapy, and they are additionally proposed as potential targets for CSC treatment.

On the other hand, it is well-documented that tumors have phenotypic and functional heterogeneity [2–4]. In light of this heterogeneity, many researchers are now paying attention to cancer stem cells (CSCs) [5].

One of the experimental approaches for obtaining CSC-like properties in cells is to culture cancer cells in suspension, resulting in spheroid-shaped cells [6–8]. Indeed, a previous study has suggested that metabolic profiles in spheroid-derived cells from ovarian serous adenocarcinoma were different from those in cancer cells that were cultured in adherent plates [8]. The significance and implications of this difference were not fully discussed.

A principal components analysis clearly divided these four groups. Additionally, the differences in the metabolites generated under 3D and 2D conditions were attributable to the amino acids that are essential for actively and efficiently carrying out TCA cycle reactions; namely, serine, aspartate, glutamate and glutamine [6, 9–15]. Indeed, these amino acids were significantly increased in 3D conditions when compared to 2D conditions. Accordingly, OVTOKO-3D and SiHa-3D cells contained more total adenylates than did OVTOKO-2D and SiHa-2D cells, respectively. We herein report that activation of TCA cycles appears to be a metabolic feature of CSCs that distinguishes them from non-CSCs. Although metabolic pathways of the amino acids, especially serine and glutamine, are already considered as targets for cancer therapy [6, 14, 15], they are additionally proposed as potential targets for CSC treatment.

The presence of a population of CSC marker-positive cells was confirmed in spheroids. The experimental procedures and a representative image of a spheroid are shown in Figures 1A and 1B. Although a CSC marker for ovarian clear cell adenocarcinoma is yet to be identified, CD44v6 and aldehyde dehydrogenase 1 (ALDH1) activities are considered in the literature as candidates for CSC markers [16, 17]. Indeed, OVTOKO-3D cells expressed CSC markers more highly than did OVTOKO-2D cells (Figure 1C). Likewise, SiHa-3D cells expressed greater ALDH1 (which has been reported as a cervical CSC marker) activity than did SiHa-2D cells, as was previously reported (data not shown) [18]. 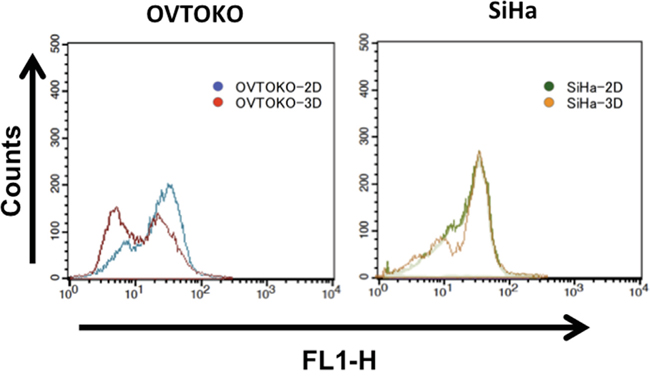 As is shown in Figure 3, PCA completely separated the metabolic profiles of the four groups. Principal component (PC) 1 was interpreted as capturing the cell type separation and PC 2 was interpreted as capturing the culture condition separation (2D vs 3D). The aim of the present study was to gain insight into the metabolic features of CSCs that are distinct from non-CSCs, and thus the major factors of PC2 became the focus of this study. 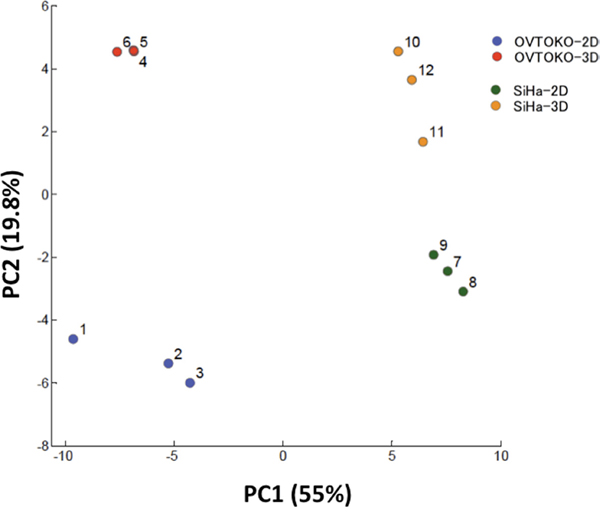 Factor loadings for PC2 are shown in Table 1. Serine, aspartate, glutamate and glutamine are the top amino acids that accounted for PC2 separation. Indeed, these metabolites are significantly higher in the 3D group than in the 2D group (Figure 4). 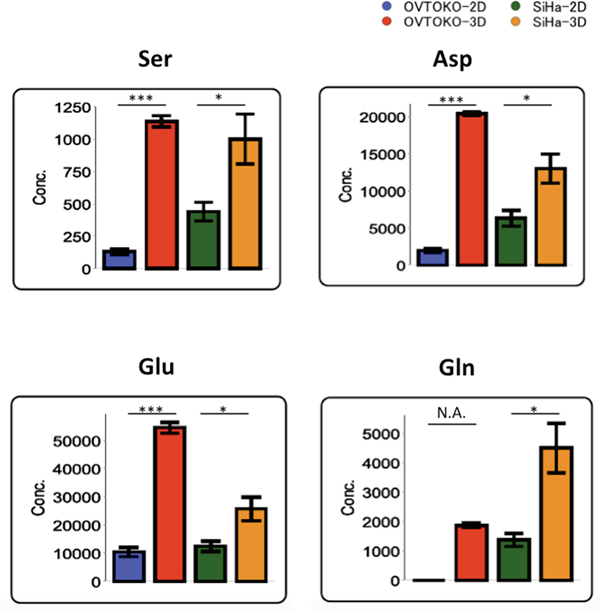 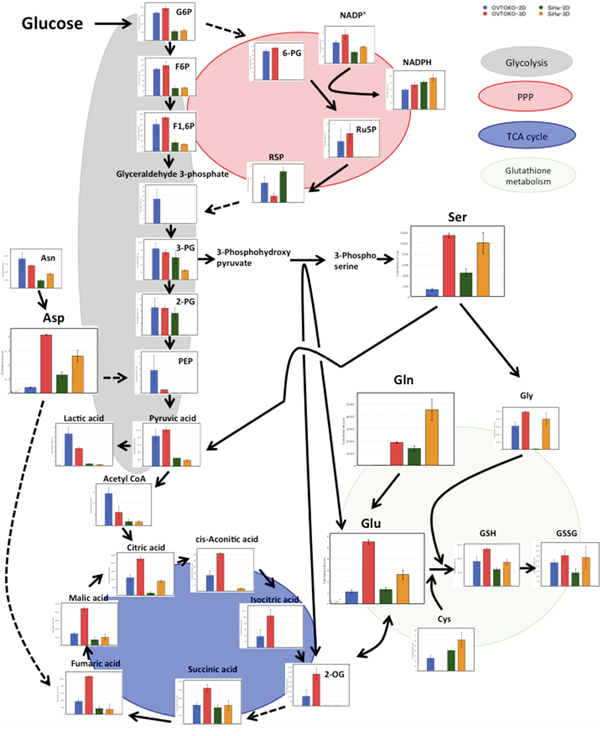 Figure 5: Summary of the metabolomic profiles in 2D vs. 3D cultures for each cell line. 3D metabolism was drastically reprogrammed compared to 2D metabolism. 3D metabolism patterns suggest an increased contribution of the TCA cycle when compared to 2D metabolism. The values shown represent the means ± S.Ds. The lack of a bar graph representation for a given metabolite means that the metabolite was not detected. Solid lines represent neighboring reactions, and dashed lines represent that some reactions were omitted due to space limitations.

This study investigated metabolic features of cancer stem cells (CSCs) that were distinct from non-CSCs in gynecological malignancies.

Aerobic glycolysis, which is known as the Warburg effect, is thought to be a hallmark of cancer cells [1]. On the other hand, intratumoral heterogeneity, which results in resistance to cancer treatment, is now a common research focus [2–4]. In particular, CSCs are currently being investigated in various types of solid tumors [5].

In the present study, a metabolome analysis demonstrated that CSC-like cells carried out the TCA cycle more actively than non-CSCs.

Most commonly, medium for spheroid culture contains epidermal growth factor (EGF), fibroblast growth factor-2 (b-FGF) and a few other supplements [8, 18]. However, the use of this medium introduces challenges in the interpretation of metabolome results because the metabolites that are influenced by these supplements cannot easily be distinguished from those produced endogenously. For instance, EGF signaling is known to activate glycolysis [19]. For this reason, we chose RPMI-1640 medium for suspension cultures. The experimental procedures that were used in this study enabled a focus on the metabolism influenced only by the presence or absence of a particular scaffolding.

One limitation of this study is that we used only two cell lines. However, we specifically chose cell lines that differed in terms of origin (ovary or cervix) and pathology (adenocarcinoma or squamous cell carcinoma). Still, because the cell lines differed, we limited our conclusions to the factors associated with PC2, which we felt would be independent of cancer cell type and could therefore be potential targets for CSC treatment.

Although differences in metabolites between the cell types (PC1) were not the focus of this study, it would be of interest to delve further into this data because this factor could reflect differences in clinical behaviour between ovarian clear cell carcinomas and cervical squamous cell carcinomas. For instance, the concentrations of total amino acids were significantly higher in 3D conditions than in 2D conditions for both OVTOKO and SiHa cells, however, the attributes between them were completely different; almost all kinds of amino acids were increased in SiHa-3D compared to SiHa-2D, on the other hand, a much more limited number of amino acids contributed to the increase in total amino acids in OVTOKO cells (Figure S1A and S1B).

In conclusion, the activation of the TCA cycle was here shown to be a specific metabolic feature of CSCs but not of non-CSCs. Metabolic pathways involving the amino acids discussed here, especially serine and glutamine, are already under consideration as targets for cancer therapy [12, 14, 15, 20],; we propose they are also potential targets for CSC treatment. It is not yet clear whether this reprogramming is caused by changes in enzymatic expression [9, 13, 21], in the expression of transporters [22], in amino acid sensors or in morphology [7, 22–24]. The discovery of the key mechinisms behind metabolic reprogramming in CSC is an important goal for future investigative efforts.

The cancer cell lines OVTOKO and SiHa were obtained from American Type Culture Collection (ATCC, USA) and cultured in RPMI-1640 medium (Wako, Japan. Lot # ECH7023) supplemented with 10% fetal bovine serum (FBS; Invitrogen, USA. Lot# 1606672) and 100 U/ml penicillin/ 100 μg/ml streptomycin(Wako), and sub-cultured by 0.25% trypsin/EDTA (Wako) detachment. All cells were grown in a humidified atmosphere at 37°C and 5% CO2. Media and FBS from the same lot were used for all experiments (including suspension cultures).

Dissociated single cells (2 X 105 cells/ml) were seeded into ultra-low attachment plates (Corning, USA) and were cultured for 2 days. For collecting spheroids, medium was centrifuged for 2 min at 100 X g and the supernatants were carefully aspirated. Prior to each experimental procedure (except metabolome analysis), collected spheroids were dissociated with Accutase (Gibco, USA).

Metabolome analysis was carried out through a facility service(C-SCOPE) at Human Metabolome Technologies, Inc.(HMT, Inc., Japan) as previously described (n=3 in each group) [25, 26]. A total of 116 metabolites were analyzed. When collecting samples, adherent culture cells were removed using a cell scraper in an effort to exclude the possible influence of the dissociation solution. They were subsequently treated with protocols identical to those employed with spheroids. Washes were performed using 5% mannitol.

This work was supported by JSPS KAKENHI Grant number 26293357 and by the Practical Research for Innovative Cancer Control from Japan Agency for Medical Research and Development, AMED. We also greatly appreciate Professor. DJ Schust for kind editorial help.

No potential conflicts of interest.