Head and neck squamous cell carcinoma (HNSCC) refers to cancers arising from a variety sites within the head and neck region, including following five basic areas: the oral cavity, the pharynx, the larynx, the nasal cavity including paranasal sinuses, and the salivary glands. Overall, it accounts for approximately 600,000 new cases and 300,000 death each year worldwide [1–2]. The common risk factors include alcohol and tobacco consumption, human papillomavirus (HPV) and Epstein-Barr virus infection [3]. Males are more likely to be affected than females. The variation of disease prevalence in different regions of the world reflexes the variation of these risk factors. For example, nasopharyngeal cancer is more common in southern region of China because of EBV infection [4], while mouth and tongue cancers are more common in the subcontinent of India because of tobacco chewing [5–6]. HNSCC is a heterogeneous disease with different prognosis by disease location, with worst survival for hypopharynx and best survival for larynx. Over 50% of HNSCC cases are diagnosed as regional advanced or metastatic diseases, prognosis is better in female patients than in male patients [7–8]. Despite our improved understanding of epidemiology of HNSCC, the prognosis and overall survival of advanced HNSCC cases remain poor.

The latent transforming growth factor binding proteins (LTBPs) belong to the fibrillin superfamily of extracellular matrix (ECM) proteins characterized by a repeated domain structure including both calcium binding (cb) EGF-like domain repeats and 8-Cys TGFβ binding domain (TB domain) repeats [9]. They were originally isolated from the large latent TGFβ complex that were covalently linked to the TGFβ propeptide (latency associated peptide or LAP) via disulfide bonds, but are also associated with fibrillin microfibrils in the extracellular matrix (ECM) [9–10] In humans, there are four LTBP isoforms (LTBP1-4) and expressed in a wide variety of tissue types [11]. They are not only key regulators of biological activities of TGFβ family growth factors, but also important for the structural integrity of the ECM. Because both TGFβ family growth factors and ECM play important roles in tumorigenesis, LTBPs have also been implicated in malignant transformation.

Unlike other LTBPs, LTBP2 does not form covalent complexes with latent TGFβ. It has been hypothesized that LTBP2 indirectly regulates the activation of TGFβ by competing with LTBP1 for the same binding site to fibrillin-1 in microfibrils. In addition, LTBP2 contains an RGD integrin recognition site, thus plays an important role in cell adhesion [12]. Both tumor suppressing and tumor promoting roles have been assigned to LTBP2: it is downregulated in nasopharyngeal carcinoma (NPC) and esophageal squamous cell carcinoma (ESCC) [13–14], while it is upregulated in cervical, liver and ovarian cancers [15–17], and LTBP2 amplification has been reported in HNSCC [18]. 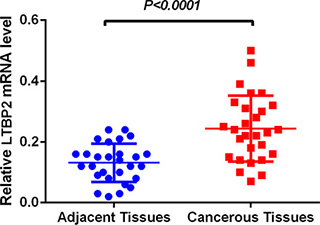 Figure 1: LTBP2 mRNA level was significantly higher in HNSCC tissues than in adjacent normal tissues. LTBP2 mRNA was determined by qRT-PCR and relative quantification analysis by normalizing to GAPDH mRNA. 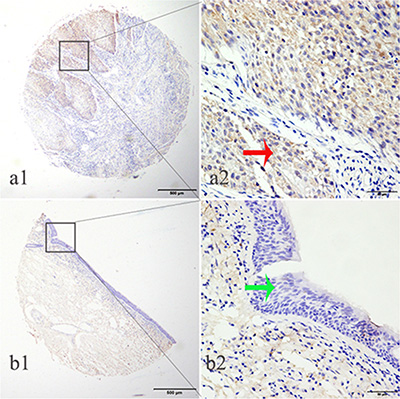 LTBPs are key regulators of TGFβ activities, including cell growth, cell invasion, differentiation and morphogenesis [11]. TGFβ is secreted as a large latent complex (LLC) comprised of mature dimeric TGFβ, TGFβ propeptide (also known as latency-associated propeptide, LAP) and LTBP. LTBPs participate and regulate every step of TGFβ’s biology: from folding, assembling, secretion, localization to activation. In the endoplasmic reticulum (ER), LTBP functions as the chaperone assisting the proper folding of TGFβ and LAP, assembling of TGFβ and LAP into small latent complex (SLC) then LLC, and efficient secretion of LLC [10]. Secreted LLC is stored in the ECM through interactions between LTBP and multiple extracellular proteins, and TGFβ activation is initiated through recognition of LTBP by integrin and enzymatic degradation of LTBP [10, 23–24]. The role of LTBPs in tumorigenesis is mainly through regulating TGFβ activities [25–26]. However, LTBPs also interact with other potent growth factors and important structural proteins of the ECM, playing vital roles in organ formation and tissue homeostasis [11]. It has been proposed that LTBPs can influence the structure of tumor stroma independent of TGFβ’s activities [27].

During tumor initiation, TGFβ is tumor suppressive through its growth inhibition activity; but during tumor progression, TGFβ can promote invasion, metastasis, angiogenesis and immunosuppression [24]. Thus it is not surprising that both tumor promoting and tumor suppressing functions have been proposed for LTBP2. LTBP2 protein was upregulated in pancreatic cancer tissue samples [28] and plasma samples from hepatocellular carcinoma (HCC) patients [16]. LTBP2 was upregulated in cervical cancer cells and associated with clinical stage, tumor size, depth of stromal invasion and lymph node metastasis [16]. High LTBP2 protein expression predicts poor survival in serous ovarian carcinoma [17]. Mechanistic studies demonstrated that LTBP2 knockdown inhibited tumor proliferation and migration, and MAPK, PI3K-AKT, RTK and p53 signaling pathways were involved in cervical carcinogenesis [15]. In colon cancer, LTBP2 was upregulated in tumor stromal cells, but not in cancer epithelial cells [29]. On the other hand, LTBP2 was epigenetically silenced in several cancer types: LTBP2 is methylated in chronic lymphocytic leukemia (CLL) [30]; in melanoma, LTBP2 is epigenetically silenced to promote TGFβ mediated cell invasion [31]; in NPC, LTBP2 is methylated to inactivate NF-κB p65 protein mediated oncogenic signaling pathway [13, 32]. In ESCC, both tumor suppressing and tumor promoting functions have been observed for LTBP2: it was epigenetically downregulated in tumor tissues compared to normal tissues; however, low tumor cell LTBP2 expression predicts better overall survival [14]. Our data suggest that LTBP2 acts as an oncogene in HNSCC.

Our study has several limitations. First, our study samples were limited to Chinese population and subject to sample selection bias, so our conclusions may not be extended to other populations without further validation from future larger international studies. Second, our current study only included oral cavity squamous cell carcinoma (65%) and laryngeal squamous cell carcinoma (35%). It is known that HNSCC is a heterogeneous disease with different prognosis by tumor location. In European populations, the relative survival for patients with hypopharyngeal squamous cell carcinoma is only 25%, while the relative survival for patients with laryngeal squamous cell carcinoma is about 59%. Thus, we do not know whether our conclusions can be extended to all HNSCC sites. Third, we only included alcohol and tobacco consumption risk factors in our analysis, but not other two known risk factors for HNSCC: HPV and EBV infection. Fourth, we did not determine whether LTBP2 overexpression was due to DNA amplification. Earlier studies have reported that LTBP2 was highly amplified in HNSCC [14]. Finally, our clinical data were not complete, for example, we did not have treatment history during follow-up. Although we excluded the missing data points for the statistical analysis, future studies are needed to confirm our results.

In conclusion, our study demonstrates the involvement of LTBP2 in HNSCC and as an independent prognostic marker for HNSCC in Chinese population. Because of the essential role LTBPs play in regulating TGFβ activity and additional function in maintaining ECM structure, the elucidation of the molecular mechanisms of LTBPs will help understanding the role of TGFβ in tumorigenesis and tumor progression, and allow the development of optimal therapeutic agents that target the activity of TGFβ in cancer.

A total of 348 HNSCC patients were included in the study. Twenty eight HNSCC patients were consented and enrolled before surgery, and 56 fresh tissue samples were collected and frozen at the time of surgery. In addition, 320 HNSCC patients provided 459 archived formalin-fixed paraffin-embedded (FFPE) tissue blocks. Clinical characteristics were obtained from patients’ medical records. The study protocol was approved by the Human Research Ethics Committee of the Affiliated Hospital of Nantong University, Jiangsu, China.