Extranodal NK/T-cell lymphoma (ENKTCL) is an aggressive non-Hodgkin’s lymphoma [1] and is closely associated with Epstein-Barr virus (EBV) infection [2]. ENKTCL is much more common in Asia and Central and South America than in Western countries [3]. Because of the high rate of locoregional and systemic recurrence with standard radiotherapy treatment alone, chemotherapy has been integrated into the management of ENKTCL [4]. There is increasing evidence that asparaginase-based chemo-radiotherapy regimens are superior to anthracycline-based regimens in the treatment of ENKTCL due to overexpression of the multidrug-resistant (MDR) gene in tumor cells [5, 6]. Asparaginase-based chemotherapy combined with radiotherapy, which significantly improves long term survival rates, has therefore become the standard treatment for ENKTCL. Despite recent progresses, nearly 30% of patients with localized ENKTCL still develop local and systemic failures and die due to disease progression [6, 7]. Identification of patients with a high risk of relapse is therefore crucial in ENKTCL treatment.

Immunity response to cancer is also important for controlling tumor progression. However, cancer cells use a number of immune ‘checkpoints’ to evade immune attack [8]. The programmed death 1 (PD-1) receptor protein, which suppresses T cell-mediated immune response, is a key immune checkpoint molecule expressed by T cells [9]. Tumor cells and cells in the local microenvironment both express the PD-1 ligands PD-L1 (B7-H1) and PD-L2 (B7-DC), which bind to PD-1 and inhibit the proliferation of activated lymphocytes and production of cytokines [10, 11]. PD-L1 is upregulated in various types of cancer, and its blockade significantly enhances antitumor effects [12]. Recent studies showed that PD-L1 protein is expressed in tumor cells from ENKTCL patients [13, 14]. Rossille et al. recently reported that the soluble PD-L1 (sPD-L1) concentration in blood could predict overall survival and treatment response in diffuse large B cell lymphoma (DLBCL) [15]. In this prospective observational study, we measured sPD-L1 protein levels in pre- and post-treatment serum samples from ENKTCL patients who were treated with asparaginase-based chemotherapy followed by radiotherapy to evaluate the value of this immune checkpoint for predicting survival.

The median serum sPD-L1 concentration for all patients was 2.76 ng/mL (range, 0.61–10.45 ng/mL), and the mean was 2.79 ng/mL. Serum sPD-L1 was measured in twenty healthy volunteers, and the median of 0.68 ng/mL (range 0.057–1.30 ng/mL) was lower than that of ENKTL patients (P<0.001, Figure 1A). ROC curve analysis was used to define an optimal cutoff point for survival prognosis. A cutoff value of 3.23 ng/mL was identified as the most discriminative serum sPD-L1 concentration, with an area under the curve (AUC) value of 0.799 [95% confidence interval (CI) 0.698–0.899, P< 0.001]. According to this cutoff value, 63 patients (64.9%) were assigned to the low-sPD-L1 group (≤3.23 ng/L), and 34 patients (35.1%) were assigned to the high-sPD-L1 group (>3.23 ng/L). The baseline clinical characteristics of the patients in the low- and high-sPD-L1 groups are compared in Table 1. The high-sPD-L1 group had a higher proportion of patients with positive pretreatment EBV-DNA levels, elevated serum LDH levels, and high IPI and KPI scores. Serum sPD-L1 levels were higher in EBV-DNA-positive patients and in those with elevated LDH levels, those without complete response (CR) after treatment, etc., as shown in Table 1. However, there was no significant correlation between serum sPD-L1 level and age, ECOG PS, B symptoms, Ann Arbor stage, or chemotherapy regimen. Chemotherapy regimens also did not differ between the low- and high-sPD-L1 groups (P = 0.639). 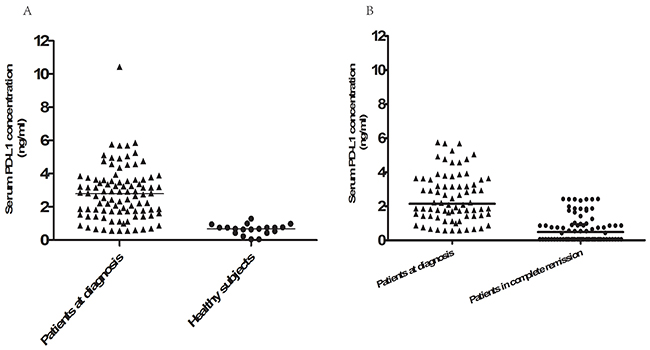 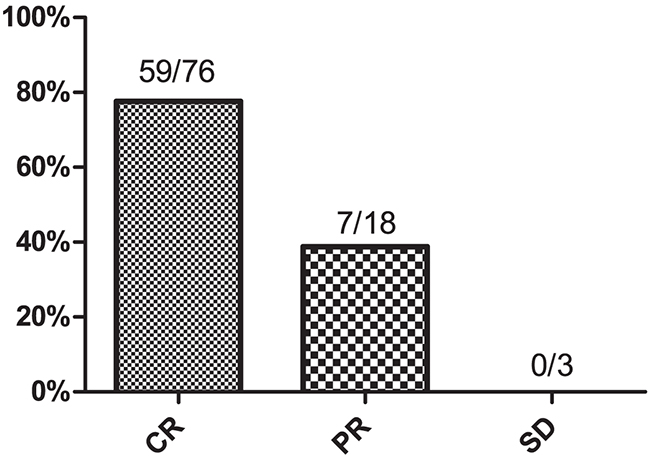 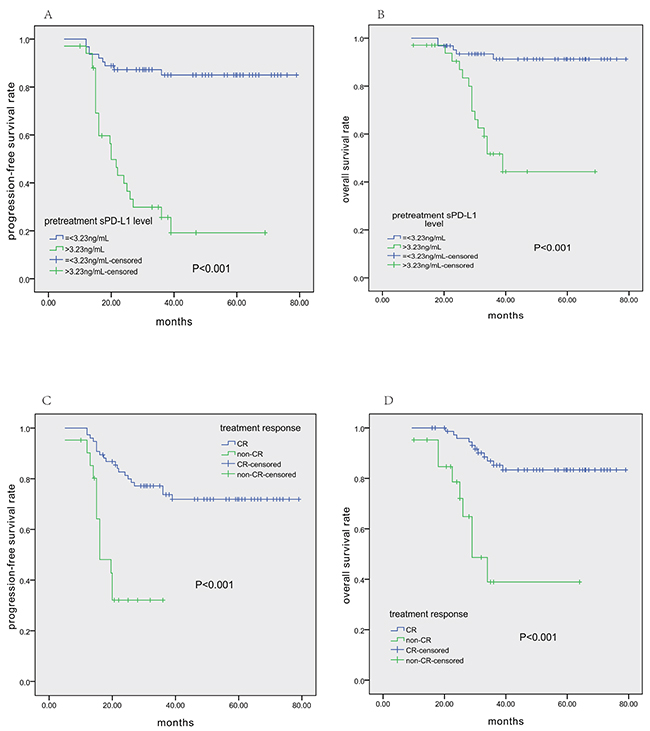 Table 2: Univariate and multivariate analysis of factors associated with progression-free and overall survival in all patients 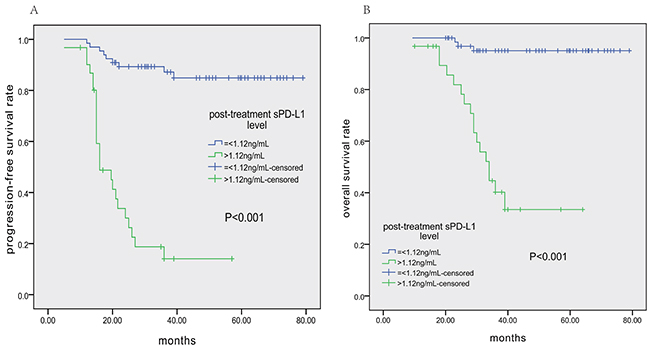 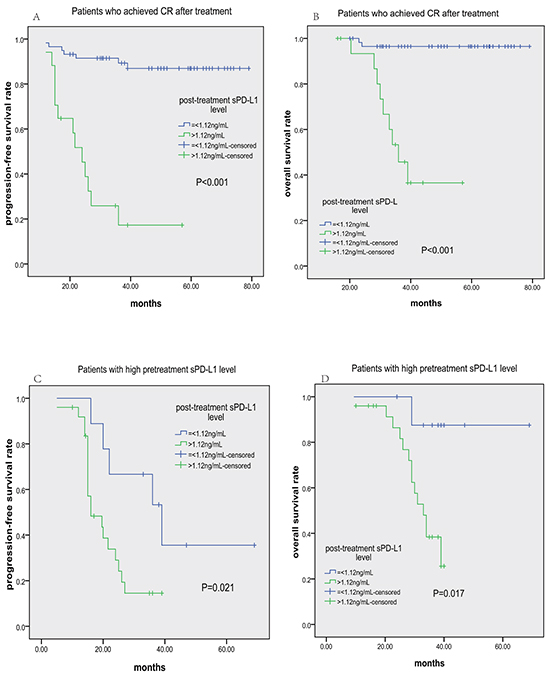 We investigated the presence and distribution of PD-L1 in ENKTCL tissue using immunohistochemistry. At least 5% of tumor cells were PD-L1-positive in 76 out of the 97 patients (Supplementary Figure S2). The percentage of PD-L1-positive tumor cells in total malignant cell number was positively correlated with pre-treatment sPD-L1 levels (r=0.8618, P<0.0001, Supplementary Figure S3). Patients with high (≥30% of the median value) PD-L1 protein levels had decreased 3-year OS rates compared to those with low (<30% of the median value) PD-L1 levels (60.8% versus 93.4%, P<0.001).

In this study, elevated serum sPD-L1 levels were associated with poor responses to treatment. In ENKTCL patients, anthracyclines-based chemotherapy, such as CHOP, result in poorer responses because of high MDR gene expression in tumor cells [21]. Our prospective study demonstrated that asparaginase-based chemotherapy (GELOX) improved the CR rate in early stage ENKTCL patients and resulted in longer PFS and OS [6]. However, 20%-30% of ENKTCL patients are resistant to asparaginase-based chemotherapy, and there are no known biomarkers for predicting response to asparaginase-based regimens. Here, patients with high pretreatment EBV-DNA levels had a lower CR rate. We previously measured PD-L1 levels in two ENKTCL cell lines and found they were higher in SNK-6 than in SNT-8 cells. In further in vitro studies, we found that ENKTCL cell lines with high PD-L1 expression were less susceptible to pegaspargase and gemcitabine than those with low PD-L1 expression (see Supplementary Figure S4A and S4B). Moreover, cells with high PD-L1 expression had higher levels of Bcl-2 and FasL than cells with low PD-L1 expression (see Supplementary Figure S5). These findings suggest that pretreatment sPD-L1 level may be a useful biomarker for predicting the efficacy of asparaginase-based treatment. Patients with high pretreatment sPD-L1 levels may benefit from novel drugs or more intensive treatments rather than asparaginase-based therapy.

The ethics committee of Sun Yat-Sen University Cancer Center approved this study; all patients and healthy volunteers signed written informed consent for medical information and serum samples. The study was conducted in agreement with the Helsinki Declaration.

This was a prospective study in a large cohort of patients newly diagnosed with nasal ENKTCL, who received asparaginase-based chemotherapy followed by radiotherapy at the Sun Yat-sen University Cancer Center between January 2008 and July 2015. The inclusion criteria were as follows: (1) untreated, histologically confirmed ENKTCL patients; (2) primary tumor site located in the upper aerodigestive tract; (3) Ann Arbor stage was IE or IIE; (4) complete treatment and follow-up data; (5) available serum collected at the time of diagnosis and after treatment. The exclusion criteria were: (1) previous or concomitant malignancies; (2) previous anti-cancer treatments; (3) any coexisting medical problems that could cause poor compliance with standard antitumor therapy protocols.

All patients were treated with upfront asparaginase-based chemotherapy, e.g. GELOX (gemcitabine,oxaliplatin, L-asparaginase) [7] and CHOP-L (CHOP plus L-asparaginase) [25]. Patients received at least two cycles chemotherapy and a maximum of six cycles. After chemotherapy was complete, a median of 54 Gy radiotherapy was delivered daily at 2 Gy with 5 fractions each week, using three-dimension conformal radiotherapy or intensity-modulated radiotherapy (IMRT). The clinical target volume of limited stage IE patients was defined as the bilateral nasal cavity, bilateral ethmoid sinuses, and ipsilateral maxillary sinus. Above-mentioned zones as well as involved tissues were included in the clinical target volume for extensive stage IE patients. Inclusion of the bilateral cervical lymph node area was required in the clinical target volume for stage IIE disease. Response evaluation was performed after each 2 cycles of chemotherapy or before and after radiotherapy according to standard response criteria for non-Hodgkin’s lymphoma [26].

Blood samples were obtained from the 97 patients at diagnosis and 1 month after the completion of treatment and from 20 healthy volunteers from the Guang Zhou City Blood Bank matched for sex and age with all enrolled patients. Serum was collected from the blood samples by centrifuging at 4000 × g and stored as 500 μL aliquots at −80°C until assays were conducted. Sandwich enzyme-linked immunosorbent assay (ELISA) kits (PDCD1LG1 ELISA kit, USCN Life Science, Wuhan, China) were used to determine serum soluble PD-L1 level according to the manufacturer’s protocol. The minimum detectable level of sPD-L1 was 0.057 ng/mL. Briefly, samples and standards were added to a microplate precoated with a PD-L1-specific monoclonal antibody. After enzyme reagent and any unbound antibody was removed by washing, a substrate solution was added to the wells, Stop Solution was used to terminate color development, and the absorbance value was read at 450 nm using a spectrophotometer (Tecan,Mannedorf, Switzerland). The sPD-L1 concentrations were calculated using a standard curve, which was constructed using the standards.

Representative formalin-fixed, paraffin-embedded tissues obtained from surgical resections or biopsies were used for IHC. Four-micrometer-thick sections ofparaffin-embedded tissues were cut, placed on slides, deparaffinized in xylene, and hydrated in a graded alcohol series. Immunohistochemical staining of PD-L1 was performed by incubating with a 1:50 dilution of a PD-L1 antibody (ab58810, Abcam, Cambridge, UK). IHC was performed using a modified avidin-biotin peroxidase complex amplification and detection system. PD-L1 expression percentages were quantified by determining the number of cells with membrane staining among the total number of tumor cells in the field examined under high magnification (200x).

Serum sPD-L1 levels are expressed as median (min, max), while categorical data are presented as n (%). Correlations between pretreatment serum sPD-L1 levels and clinical characteristics were analyzed using Mann–Whitney U tests or Chi-square tests. The cutoff levels for pretreatment sPD-L1 and post-treatment sPD-L1 for survival prediction were determined using the receiver operating characteristics (ROC) curve analysis. The Kaplan-Meier method and log-rank test were used for survival analysis. If the two-sided P value was <0.05, variables were considered significant in univariate analysis and were entered into multivariate analysis. Multivariate analysis using the Cox regression model was used to evaluate the impact of selected variables on prognosis.

We thank the patients and their families and all the investigators, including the physicians, nurses, and laboratory technicians, who contributed to this study. This study was supported by the following funds: Science and Technology Projects of Guangdong Province (contract/grant numbers: 2014A020212577), Young Teachers’ Cultivation Project of Sun Yat-Sen University (No.16ykpy30), and Medical Research Foundation of Guangdong Province (contract/grant number: A2015008).

2. Lim MS, de Leval L and Quintanilla-Martinez L. Commentary on the 2008 WHO classification of mature T- and NK-cell neoplasms. Journal of hematopathology. 2009; 2:65-73.