Hepatocellular carcinoma (HCC) is one of the most malignant and lethal human cancers. Epithelial-mesenchymal transition (EMT) enhances the carcinogenesis of HCC, and therapies targeting EMT appear to be promising treatments. We have previously shown that Krüppel-like factor 4 (KLF4) suppressed EMT of HCC cells through downregulating EMT-associated proteins. Here, we examined the roles of microRNAs (miRNAs) in KLF4-regulated EMT in HCC cells. KLF4 induced expression of 3 miRNAs (miR-153, miR-506 and miR-200b) that targeted 3′-UTR of Snail1, Slug and ZEB1 mRNAs, respectively, to inhibit protein translation in HCC cells, which was confirmed by promoter luciferase assay. Expression of either miRNA significantly inhibited HCC cell growth and invasiveness, while the effect of combined expression of all 3 miRNAs was more pronounced. Furthermore, overexpression of antisense of all 3 miRNAs abolished the inhibitory effect of KLF4 on HCC cell growth and invasiveness. Together, our data suggest that KLF4 inhibits EMT-enhanced HCC growth and invasion, possibly through reducing EMT-related proteins Snail1, Slug and ZEB1 via increasing miR-153, miR-506 and miR-200b.

The malignancy of hepatocellular carcinoma (HCC) largely results from its aggressive characteristics [1-6]. Hence, targeting therapies upon the invasiveness and metastases of HCC may be effective treatments.

The zinc finger protein Krüppel-like factor 4 (KLF4) regulates gene transcription and cell fate in a context-dependent manner, and has been shown to promote cell differentiation, and to suppress tumor growth stem cell and malignant progression [7-9]. First of all, KLF4 is dispensable for early development [7-9]. Moreover, when KLF4 is expressed in adult somatic cells with other Yamanaka factors [10, 11], KLF4 has been shown to promote the formation of induced pluripotent stem (IPS) cells [12]. For example, KLF4 is found to suppress cell proliferation through modulation of p21Waf1/Cip1 [13]. A variety of growth-suppressive signals activate KLF4, e.g. cell-contact inhibition, serum starvation, DNA damage, and cell differentiation [7-9]. These in vitro results suggest KLF4 may suppress cell proliferation rates in cancer cells, including HCC [14-17]. Nevertheless, the underlying mechanisms are not completely understood. We have previously shown that KLF4 binds to the promoter of Vitamin D receptor (VDR) to regulate its expression [18]. Moreover, the levels of KLF4 are reduced and the levels of VDR are increased in HCC cell lines and primary tumor samples [18]. Furthermore, expression of KLF4 in HCC cells sensitizes them to the anti-proliferative effects of VD3, possibly through regulation of epithelial-mesenchymal transition (EMT)-associated events related to cell metastases and growth [18]. Here, we studied how KLF4 may regulate EMT events in HCC.

The role of microRNAs (miRNAs) in the carcinogenesis have been extensively studied previously, especially their involvement in regulation of EMT-associated proteins, Snail1, Slug, ZEB1 and ZEB2. For example, miR-200 family has been shown to inhibit ZEB1 and ZEB2 [19-23], miR-506 has been shown to block Slug translation [24-27], and miR-153 has been shown to suppress Snail1 and ZEB2 [28]. However, whether these miRNAs may be regulated by KLF4 has not been acknowledged.

Here, we examined the involvement of miRNAs in KLF4-suppressed EMT in HCC cells, and the underlying mechanisms. 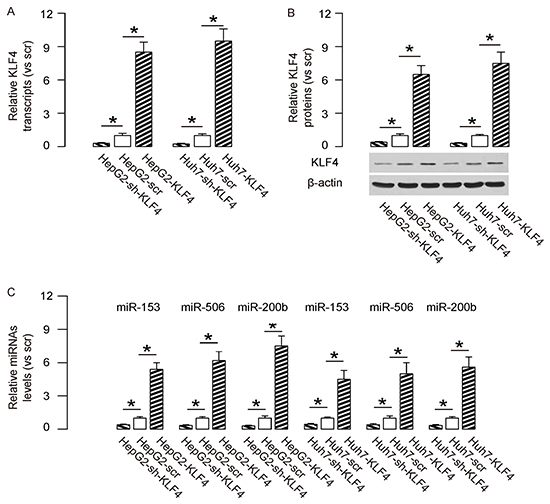 Targeting and inhibition of translation of Snail1 by miR-153, Slug by miR-506 and ZEB1 by miR-200b in HCC cells 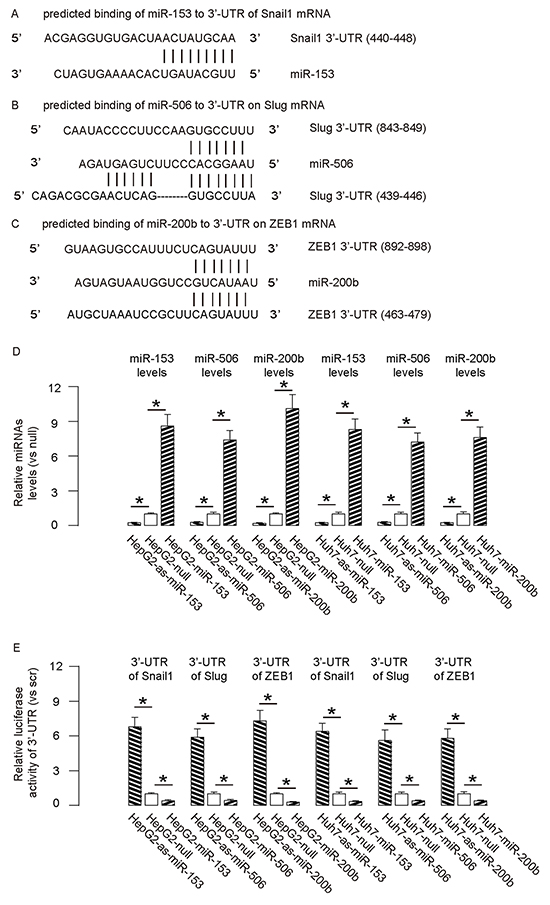 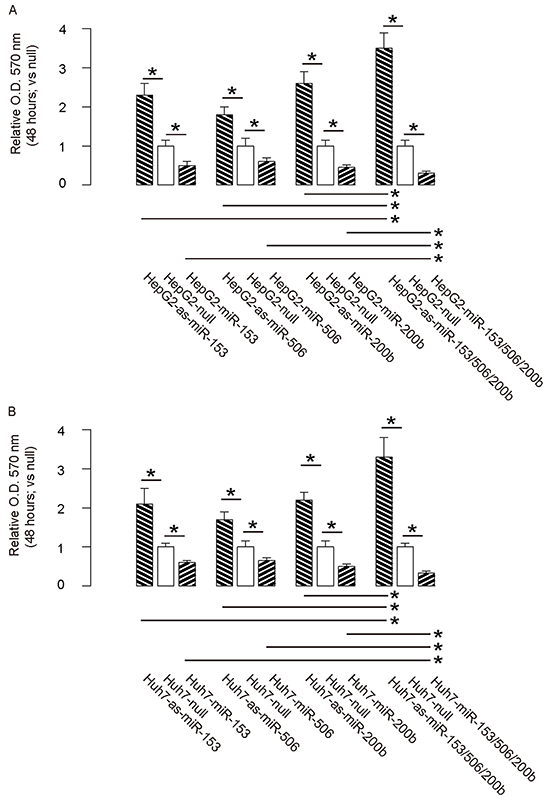 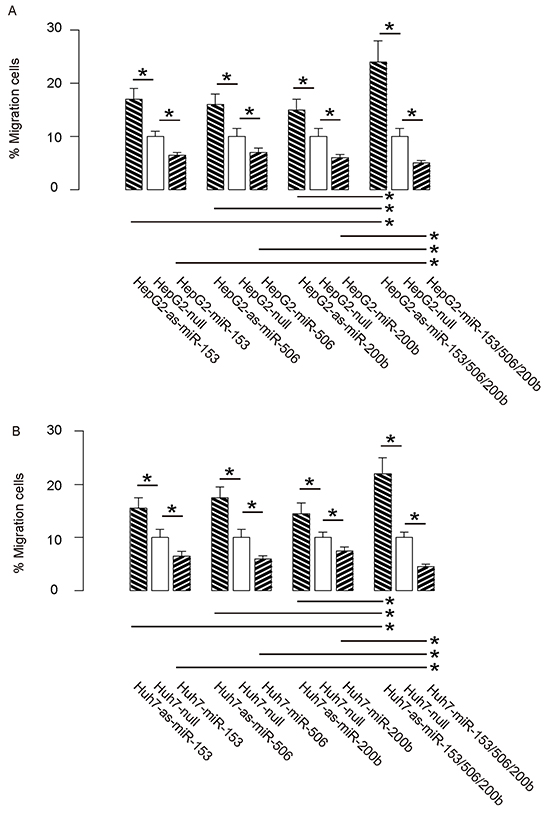 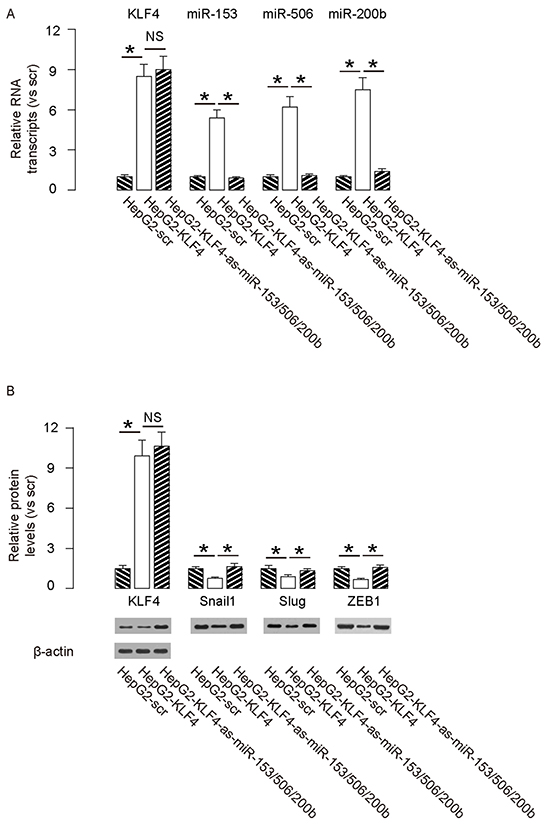 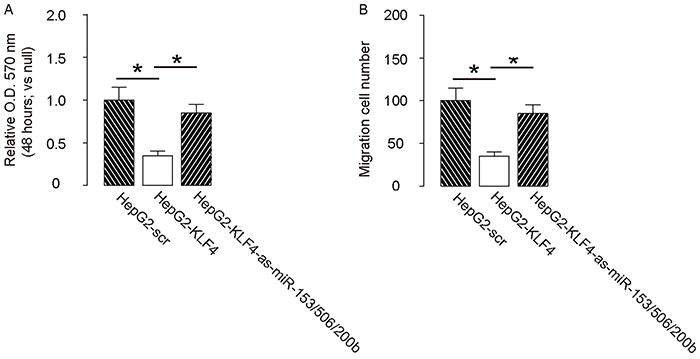 Figure 7: Schematic of the model. KLF4 may suppress the HCC cell growth and invasion through miR-153, miR-506 and miR-200b-mediated suppression of Snail1, Slug and ZEB1, respectively.

Many miRNAs affect the growth and metastasis of HCC cells. Therefore, understanding of the aberrant expression of miRNAs in HCC cells may help to clarify the mechanisms underlying HCC metastasis and thus to improve therapy.

EMT enhances the carcinogenesis of HCC, for example, Sun et al. reported that stemness factor Sox2 correlates with metastasis and low survival rate in HCC, possibly through regulation of Slug transcription [29]. Previous studies have shown that EMT-associated proteins are regulated by miRNAs in HCC [30, 31]. For example, miR-200 family has been shown to inhibit ZEB1 and ZEB2 [19-23]. Moreover, Dhayat et al. reported that miR-200a and miR-200b were significantly downregulated in HCC, and could be served as an early marker for cirrhosis-associated HCC [32]. Wong et al. showed that miR-200b negatively regulated Rho/ROCK signaling pathway to suppress metastases of HCC [33]. Further, miR-506 has been shown to block Slug translation [24-27], and miR-153 has been shown to suppress Snail1 and ZEB2 [28]. A pioneer study has shown that expression of KLF4 in HCC cells sensitizes them to the anti-proliferative effects of VD3, possibly through regulation of EMT-associated events related to cell metastases and growth [18]. However, whether KLF4 may control EMT-associated proteins through miRNAs is unknown.

We have previously shown that the reduced levels of KLF4 in HCC correlate with increased levels of EMT-associated proteins, e.g. Snail1, Slug and ZEB1. The augment of these proteins is responsible for not only cancer invasion, but also allow the outgrowth of the tumor [18]. Moreover, in our previous work, we found that the suppression of KLF4 on EMT-associated factors Snail1, Slug and ZEB1 were more pronounced at protein levels, compared to mRNA levels, which suggests presence of post-transcriptional controls. Hence, in this study, we hypothesized that KLF4 may inhibit these EMT-associated proteins through modulation of miRNAs, which regulate gene expression at post-transcriptional level. Three miRNAs (miR-153, miR-506 and miR-200b) that target 3′-UTR of Snail1, Slug and ZEB1 mRNAs, respectively, were found to be induced by KLF4 overexpression, and suppressed by KLF4 depletion, in HCC cells. To further confirm that the bindings between these miRNAs and EMT-associated proteins are functional, we performed promoter luciferase assay. Moreover, expression of either miRNA significantly inhibited HCC cell growth and invasiveness, while the effect of combined expression of all 3 miRNAs was more pronounced. In a loss-of-function experiment, we suppressed the levels of miR-153, miR-506 and miR-200b in KLF4-overexpressing HCC cells, which completely abolished the effects of KLF4 on cell growth and invasion.

Since we have used 2 HCC cell lines and got essentially similar results independently, a possibility of these results to be cell-line-dependent is unlikely. Since our data were basically achieved from HCC cell lines, in future, examination of primary HCC specimen may be applied. Also, the analyses on the EMT-associated proteins were not complete, since some proteins like ZEB2, E-cadherin may be also examined in future studies. Further, the in vivo studies should be applied to confirm these in vitro findings.

Together, the findings in the current study highlight a suppressive role of KLF4 in regulation of EMT-enhanced tumor growth and invasion in HCC cells, and suggest that enhancement of either KLF4 or its downstream miRNAs may substantially improve the current treatment for HCC.

All experimental protocols were approved by the Research Bureau of Department of Oncology, Shanghai First People’s Hospital Affiliated to Shanghai Jiaotong University.

The coding sequence of human KLF4 was amplified using cDNA of human embryonic stem cells as a template, and cloned into pLVX-ZsGreen1-C1 vector (Clontech, Mountain View, CA, USA). The short hairpin small interfering RNA (shRNA) for KLF4 has been described before [18]. A scramble sequence was used as the mock control (scr). Human KLF4 target sequence: 5′-GCCAGAAAGCACTACAATC-3′; scr sequence: 5′-CTGCGATGCGCGTTCCGCTTA-3′. The sequences encoding miR-153, antisense (as)-miR-153, miR-506, as-miR-506, miR-200b, or as-miR-200b were similarly cloned into pLVX-ZsGreen1-C1 vector. The antisense sequences were single-stranded RNAs of complementary sequence to a specific miRNA. To control the infections with miRNAs, a null plasmid was prepared (null). In the current study, we did not detect the effects of scr or null on our results, compared to untreated cells. Thus, only data from scr- or null-treated cells were shown. Transfection with either KLF4, scr, shKLF4, miR-153, as-miR-153, null, miR-506, as-miR-506, miR-200b, or as-miR-200b-expressing plasmids was performed with Lipofectamine-2000 (Invitrogen). The success of transfection (nearly 100%) was assured by GFP expression of the transfected cells.

For assay of cell viability, cells were seeded into 24 well-plate at 10000 cells per well and subjected to a Cell Proliferation Kit (MTT, Roche, Indianapolis, IN, USA), according to the instruction of the manufacturer. The MTT assay is a colorimetric assay for assessing viable cell number, taking advantage that NADPH-dependent cellular oxidoreductase enzymes in viable cells reduce the tetrazolium dye 3-(4,5-dimethylthiazol-2-yl)-2,5-diphenyltetrazolium bromide (MTT) to its insoluble formazan in purple readily being quantified by absorbance value (OD) at 570 nm. Experiments were performed 5 times.

Protein was extracted from the cultured cells with RIPA lysis buffer (1% NP40, 0.1% Sodium dodecyl sulfate (SDS), 100μg/ml phenylmethylsulfonyl fluoride, 0.5% sodium deoxycholate, in PBS) on ice. The supernatants were collected after centrifugation at 12000×g at 4°C for 20min. Protein concentration was determined using a BCA protein assay kit (Bio-rad, Shanghai, China), and whole lysates were mixed with 4×SDS loading buffer (125mmol/l Tris-HCl, 4% SDS, 20% glycerol, 100mmol/l Dithiothreitol (DTT), and 0.2% bromophenol blue) at a ratio of 1:3. Samples were heated at 100°C for 5 min and were separated on SDS-polyacrylamide gels. The separated proteins were then transferred to a PVDF membrane. The membrane blots were first probed with a primary antibody. After incubation with horseradish peroxidase-conjugated second antibody, autoradiograms were prepared using the enhanced chemiluminescent system to visualize the protein antigen. The signals were recorded using X-ray film. Primary antibodies were rabbit anti-KLF4, anti-Snail1, anti-Slug, anti-ZEB1 and anti-β-actin (Cell Signaling, San Jose, CA, USA). Secondary antibody was HRP-conjugated anti-rabbit (Jackson ImmunoResearch Labs, West Grove, PA, USA). β-actin was used as a protein loading control. The protein levels were first normalized to β-actin, and then normalized to the control.

Total RNA or miRNAs were extracted from cultured cells with miRNeasy mini kit or RNeasy kit (Qiagen, Hilden, Germany), respectively. Complementary DNA (cDNA) was randomly primed from 2μg of total RNA using the Omniscript reverse transcription kit (Qiagen). Quantitative real-time PCR (RT-qPCR) was subsequently performed in triplicate with a 1:4 dilution of cDNA using the Quantitect SyBr green PCR system (Qiagen) on a Rotorgene 6000 series PCR machine. All primers were purchased from Qiagen. Data were collected and analyzed using 2-ΔΔCt method for quantification of the relative mRNA expression levels. Values of genes were first normalized against β-actin, and then compared to the control.

Luciferase-reporters were successfully constructed using molecular cloning technology. Target sequence was inserted into pGL3-Basic vector (Promega, Madison, WI, USA) to obtain pGL3-Snail1-3′UTR, pGL3-Slug-3′UTR or pGL3-ZEB1-3′UTR, which contain the miR-153, miR-506 or miR-200b binding sequence, respectively. MiRNA-modified HCC cells were seeded in 24-well plates for 24 hours, after which they were transfected with 1μg of Luciferase-reporter plasmids per well using PEI Transfection Reagent. Then luciferase activities were measured using the dual-luciferase reporter gene assay kit (Promega), according to the manufacturer’s instructions.

All statistical analyses were carried out using the SPSS 18.0 statistical software package. All data were statistically analyzed using one-way ANOVA with a Bonferroni correction, followed by Fisher’s exact test. All values are depicted as mean ± standard deviation from 5 individuals and are considered significant if p < 0.05.