The ubiquitin-dependent proteasomal degradation of proteins controls signaling and cellular survival. In this study, we found that ubiquitin associated protein 2 (UBAP2) was significantly downregulated in hepatocellular carcinoma (HCC) tissues compared with adjacent normal tissues. Furthermore, higher expression of UBAP2 in cancer tissues was correlated with good prognosis in HCC patients. Knockdown of UBAP2 significantly enhanced the invasion and proliferation of HCC cells in vitro and promoted tumor growth in vivo, while enforced expression of UBAP2 impaired the aggressive ability and tumor growth of HCC cells. Mechanistically, UBAP2 formed a complex with Annexin A2 and promoted the degradation of Annexin A2 protein by ubiquitination, and then inhibited HCC progression. Collectively, UBAP2 appears as a novel marker for predicting prognosis and a therapeutic target for HCC.

Hepatocellular carcinoma (HCC) ranks as the fifth and seventh most common cancer in men and women, respectively, and the third most common cause of cancer-related mortality worldwide [1]. This disease is characterized by highly recurrent rate after curative resection and resistance to chemotherapy [2, 3]. Therefore, it is imperative to have a better understanding of the key genes and their mechanisms related to liver tumorigenesis and progression, and thus develop new diagnostic and therapeutic strategy. The function of these oncogenes and tumor suppress genes mainly depend on the level of their proteins influenced by post-translational modifications such as ubiquitination, phosphorylation and acetylation [4]. However, the mechanism of post-translational regulation of these genes in HCC remains to be largely uncovered.

The ubiquitin-proteasome pathway (UPP) is a common cellular process for protein degradation in eukaryotes and involves in the regulation of cellular process including cell cycle, transcription, apoptosis, cell adhesion, angiogenesis, and tumor growth [5]. Abnormal UPP usually results in many diseases, particularly cancer [6]. Recently, the UPP have emerged as important therapeutic targets in prostate cancer and HCC [7, 8]. Ubiquitin associated protein 2 (UBAP2) contains a ubiquitin associated (UBA) domain and damages the structure and function of target proteins [9, 10]. However, its function in HCC is still unknown.

In the present study, we attempted to illustrate the role and relevant molecular mechanism of UBAP2 in the invasion of HCC cells. The clinical significance of UBAP2 and its interacting protein in HCC patients were also investigated.

Firstly, we used to IHC staining to investigate the expression of UBAP2 in 105 HCC tissues. As shown in Figure 1A, the positive staining for UBAP2 was localized in the cytoplasm of liver cells and tumor cells. The intensity of UBAP2 expression in HCC tissues was weaker than that in adjacent normal tissues. In tumor tissues, UBAP2 expression varied and was strong in 34 (32.4%), moderate in 34 (67.7%), weak in 22 (21.0%), and negative in 15 (14.3%) case. We then assayed the relationship between UBAP2 expression and the clinic-pathological characteristics. We dichotomized 105 patients into UBAP2-high (strong and moderate; n = 68) and UBAP2-low (negative and weak; n = 37) groups. Our results revealed that UBAP2-high subgroups had smaller tumor size (Table 1). Importantly, survival analysis showed that UBAP2-low groups had poorer prognosis in term of overall survival (OS; p = 0.005) and cumulative recurrence rate (p = 0.033) (Figure 1B). Multivariate analysis showed that UBAP2 intensity in cancer tissues was an independent prognosticator for OS (Table 2 and 3). Above data indicate that UBAP2 expression promote the tumor progression of HCCs. 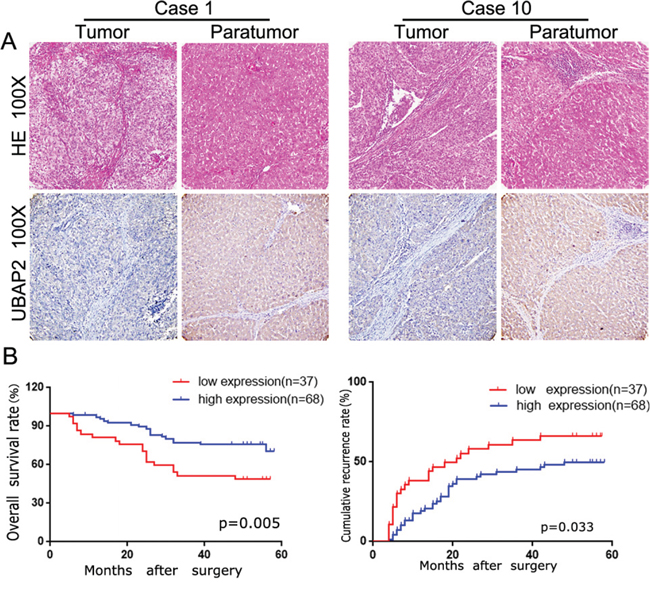 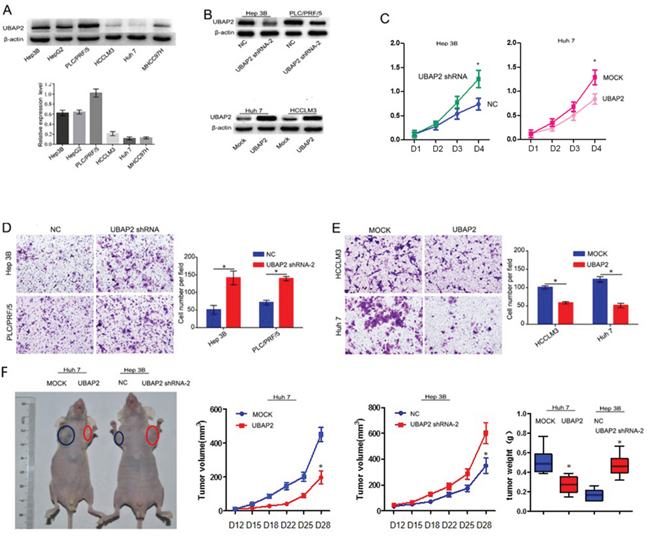 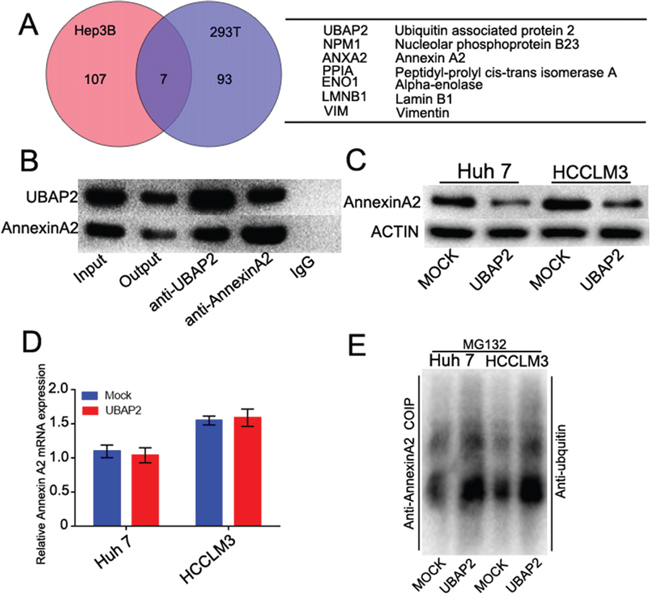 Figure 3: UBAP2 formed a complex with Annexin A2 and promoted Annexin A2 degradation. A. Identification of binding partners of UBAP2 by combination of co-IP and 2D-LS/MS in Hep3B and 293T cells. Venn diagram showed the number of binding partners of UBAP2. Seven overlapped proteins were listed in the Table. B. Co-IP analysis was used to validate the formation of UBAP2/Annexin A2 complex in PLC/PRF/5 cells. C. Western blot showed that enforced UBAP2 expression down-regulation the protein levels of Annexin A2. D. qRT-PCR showed that UBAP2 had no influence in the Annexin A2 mRNA. E. Ubiquitination assay showed that Annexin A2 degradation was promoted by UBAP2 overexpression. 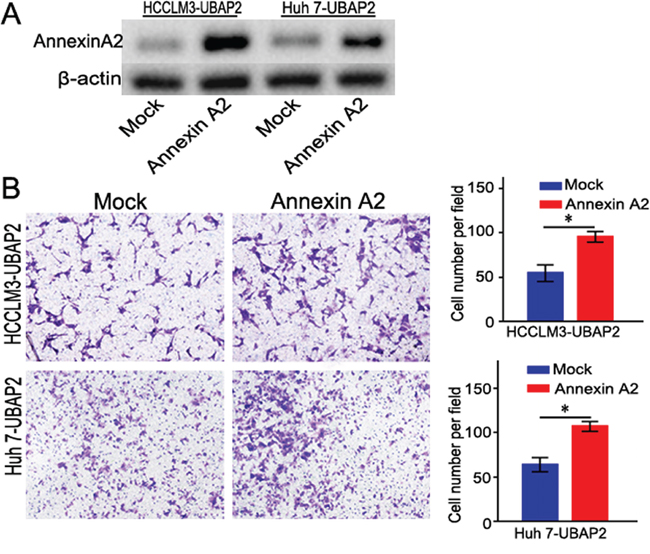 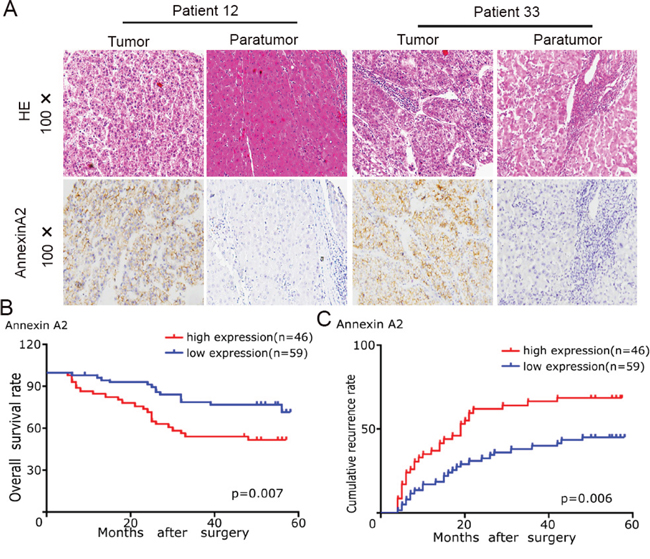 Here, we demonstrated that UBAP2 weakly expressed in tumor samples and its expression inversely correlated with prognosis of HCC patients. Moreover, enforced UBAP2 expression in HCC cells could impair the invasive ability in vitro and inhibited tumor growth in vivo. To our knowledge, it is the first time to report that UBAP2 inhibit the progress of HCC.

Recent studies reported the contradictory roles of abnormal UPP in different cancers. Dolcet et al. reported that inhibition of the UPP could activate NF-κB and induce cell death of endometrial carcinoma [11]. Similarly, UPP inhibitor could inhibit the invasiveness of leukemic cells [12] and Burkitt’s lymphoma [13] through inducement of apoptosis. Contrarily, Gobbi G et al showed that inhibition of UPP could downregulate the expression of low-molecular-weight proteins (LMP)-2 and -10, and promote the metastasis in breast cancer [14]. Thus, whether UPP acts as an oncogene or tumor suppressor gene mainly depends on the context. In present study, our evidences support that UBAP2 appears as a tumor suppressor gene in the HCCs.

Another interesting result from the our study is that UBAP2 forms a complex with Annexin A2 and promote the degradation of Annexin A2 protein through ubiquitination. In present study, we used the combination of co-IP and MS to identify 6 molecular partners of UBAP2, including Annexin A2. Accumulating evidence have showed that Annexin A2 is aberrantly expressed in a wide spectrum of cancers, including HCC [15-17]. Annexin A2 involved in several pathological processes, such as tumor cell adhesion, proliferation, apoptosis, tumor neoangiogenesis, invasion and metastasis [15, 16]. In HCCs, Annexin A2 could activate with HAb18G/CD147. Downregulation of Annexin A2 significantly decreased the secretion of matrix metalloproteinases (MMPs), migration ability, and invasive potential [18]. Annexin A2 could also inhibit the trafficking of CD147-harboring membrane microvesicles and enhance the migration and invasion potential of tumor cells [19]. In addition, Annexin A2 may downregulate β-catenin and cyclin D1 expression and involve in the inhibition of cell cycle [20]. Our results showed that enforced expression UBAP2 decreased the expression of Annexin A2 in HCC cells. Importantly, upregulation of UBAP2 expression could promote the ubiquitination and degradation of Annexin A2 protein. Even more importantly, transfection of Annexin A2 into Huh 7-UBAP2 cells and HCCLM3-UBAP2 cells could rescue the invasive ability of HCC cells. These data support the notion that upregulation of UBAP2 forms a complex with Annexin A2, and promotes its degradation by ubiquitination, thus inhibits the progression of HCCs. Certainly, our study have some limitations. For example, the role of other molecular partners in the UBAP2-mediated invasion remains to be addressed in the future.

In summary, we demonstrate that overexpression of UBAP2 promotes ubiquitination and the degradation of Annexin A2, thus impairs the progression of HCC, indicating that UBAP2 appear as a novel marker for predicting prognosis and a therapeutic target for HCC.

A total of 105 pathologically confirmed HCC patients, who underwent curative resection at Liver Cancer Institute of Zhongshan Hospital, Fudan University between January 2006 and December 2007, were enrolled in this study. The inclusion criteria, treatments and follow-up were described previously [21].

TMA were constructed as described in our earlier study [22]. IHC staining was done as previously described [22].

The human HCC cell lines HepG2, Hep3B, Huh 7, MHCC97H, PLC/PRF/5 and HCCLM3 were used in this study. These cell lines were maintained routinely [22].

The UBAP2 lentiviral vector and UBAP2 shRNA expression lentivirus were constructed (Shanghai GeneChemCo.) and transfected as described elsewhere [23, 24]. The target sequences of the shRNAs were listed in Supplementary Table 5.

Western blot and qRT-PCR were performed as described previously [21]. Rabbit anti-human UBAP2 antibody (Abcam, Cambridge, MA, USA) and Rabbit anti-human Annexin A2 antibody (Abcam, Cambridge, MA, USA) were used as primary antibody. qRT-PCR was performed to evaluate the expression level of Annexin and β-actin was used as an endogenous control. The primers used were Annexin A2, forward, 5′-TGACGCTGGAGTGAAGAGGAA-3′ and reverse, 5′-GCCCTTAGTGTCTTGCTGGATA-3: β-actin, forward, 5′-GTGGACATCCGCAAAGAC-3′ and reverse, 5′-AAAGGG TGTAACGCAACTA-3′. All experiments were performed in triplicate.

Combination of co-IP with MS were used to identify the binding partners of UBAP2 in 293T and Hep3B cells as described in our earlier study [21]. Ubiquitination assay was used to investigate the ubiquitinated role of UBAP2 as described previously [22].

12. Drexler HC. Activation of the cell death program by inhibition of proteasome function. Proceedings of the National Academy of Sciences of the United States of America. 1997; 94:855–860.