Gastric carcinoma (GC) is one of the most common malignant tumors with high mortality worldwide, especially in East Asia, and the five-year survival rate of GC is low [1-3]. Early diagnosis and treatment are the most efficient ways to improve the prognosis. Although examinations, like CT, ultrasound and gastroscopy, may provide much important information of tumor, it is still not sufficient to obtain complete data preoperatively. The detection of preoperative serum tumor markers is routinely used in a variety of tumor patients, since it may prompt the tumor burden and occult metastases of malignancies [4, 5]. However, the clinical application of preoperative serum tumor markers is still under debate.

The commonly used tumor markers for GC patients in our hospital include carbohydrate antigen 125 (CA125), carbohydrate antigen 19-9 (CA19-9) and carcinoembryonic antigen (CEA). CA125 was first detected in ovarian cancer and had been reported to be positive in 80% of ovarian epithelial tumor patients [6]. In addition, the positivity of CA125 is also seen in breast cancer, pancreatic cancer, gastric cancer and some other tumors [7]. CA19-9 is a specific marker of digestive system tumors, especially pancreatic cancer, with high positive rate preoperatively and high negative rate postoperatively [8]. Thus, it is widely used in the diagnosis and monitoring of pancreatic cancer [9]. CEA, a non-specific tumor marker, was originally used as a serum marker for colorectal cancer and could reflect the existence of a variety of tumors, such as pancreatic cancer, lung cancer and gastric cancer [10]. Although the three tumor markers are detected preoperatively, they are hardly used for the diagnosis of GC because of the poor sensitivity and specificity [11, 12]. However, they can be applied in the evaluation of therapeutic effect, monitoring of recurrence and prediction of prognosis [13, 14].

There are amount of studies focused on the relationship between tumor markers and GC, of which only a few studies explored the correlation between preoperative serum tumor markers and clinicopathological traits and survival of GC patients. According to previous studies, there is no doubt that preoperative serum CA19-9 and CEA levels are correlated with TNM stage (based on American Joint Committee on Cancer (AJCC) 7th edition) [15]. As to other clinicopathological traits, including tumor location, tumor size, microscopic type and differentiation grade, there are still no definitive conclusions. In this study, we explored the relationship between preoperative serum tumor markers (CA125, CA19-9 and CEA) and clinicopathological traits and prognostic information of GC patients.

Table 1: The clinicopathological traits of patients in the training and the validation cohorts

Table 5: Multivariate analysis of preoperative serum tumor makers with clinicopathological traits in the training and the validation cohorts

Table 6: Univariate and multivariate analysis of prognostic risk factors for overall survival in the training and the validation cohorts 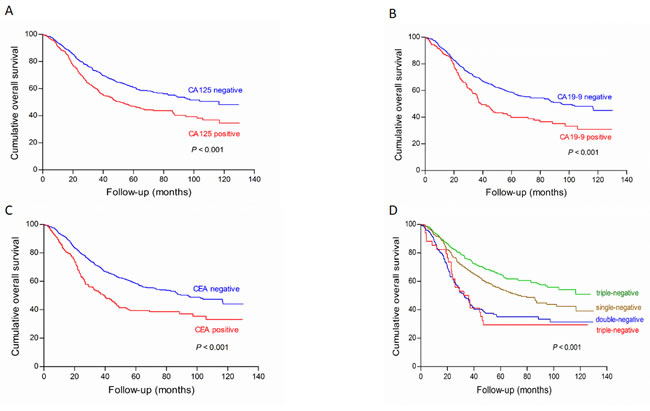 We made a further analysis by using nomogram to predict 3-year overall survival rate of individual patient. When one preoperative serum tumor marker positivity was considered as a single prognostic factor, the number of positive serum tumor markers (NPTM) was likely to be a parameter in nomogram. By using Cox regression test, age (P = 0.019), tumor size (P < 0.001), pTNM stage (P < 0.001) and NPTM (P = 0.021, HR = 1.292, 95%CI 1.040 - 1.604) were included in the nomogram (Figure 2). The nomogram indicated that age≥60, large NPTM (n = 2 or 3), large tumor size and advanced pTNM stage were the poor prognostic factors, but pTNM stage was still a most powerful one. The result of the nomogram was analogous to those of above-mentioned multivariate analysis. The calibration curve of nomogram showed that the predictive probability of 3-year survival was closely to the actual 3-year survival (Figure 3).

Figure 2: Nomogram of NPTM and clinicopathological traits in the training cohort

Figure 3: Calibration curve of nomogram in the training cohort

Validation of preoperative serum tumor markers in an independent cohort 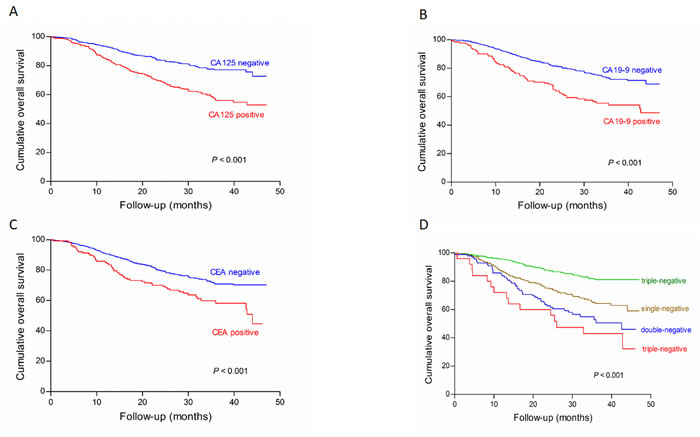 Figure 5: Nomogram of NPTM and clinicopathological traits in the validation cohort

Figure 6: Calibration curve of nomogram in the validation cohort

All enrolled patients in our study were pathologically diagnosed as GC, and our purpose was to explore the prognostic value of preoperative serum tumor markers in GC patients, therefore, the cut-off values of three tumor markers were recalculated. The cut-off values of tumor markers in previous studies were defined by the manufacturer recommendation or calculated by the receiver operating characteristic curve. X-tile plot was applied in our study as it is a time-dependent cut-off value analysis based on the survival information. The new cut-off values of CA125, CA19-9 and CEA were 13.72 U/ml, 23.36 U/ml and 4.28 ng/ml, respectively. The positive rate of CA19-9 was reported from 17.1% to 55.8%, and CEA from 16.1% to 46.6% [15, 17-21], and the positive rates of these two markers in this study were within these ranges (CA19-9: 20.0%, CEA: 19.2%). The positive rate of CA125 was 42.3%, which was much higher than other studies with the range between 21% and 31.1%. This big difference might due to that the recalculated cut-off value of CA125 in our study was obviously lower than that of other studies (20 - 35 U/ml) [12, 22, 23].

In a previous study by Erdal et al, which enrolled 106 GC patients, the result showed that there was no significant correlation between pT stage and pN stage and serum CA125, CA 19-9 and CEA levels. Moreover, only elevated CEA was significantly associated with M stage [24]. We also analyzed the association between preoperative serum tumor markers and clinicopathological traits, and found that pT stage, pN stage, M stage and pTNM stage were significantly correlated with the positivity of three tumor markers, which was consistent with previous studies [17, 25]. Our result indicated that GC patients with positive tumor markers might suffer from more advanced pathological stage. When three tumor markers were combined, the proportion of stage III-IV and lymph node metastasis in triple-positive group was higher than the proportion in the positive group of each single tumor marker, which was similar to the previous report [26]. The result indicated that combined detection of serum tumor markers could help clinician to make a more accurate preoperative staging. The tumor size larger than 5 cm might reflect in high possibility of tumor marker positivity (all P < 0.001), which resembled the previous study [27]. The similar result appeared in macroscopic type that positive tumor markers might indicate more advanced macroscopic type.

The three tumor markers exhibited difference in gender, age, tumor location and differentiation grade. The positive CA125 and CA19-9 were more likely to be seen in female patients, while positive CEA was more trend to be seen in male patients. The positive rates of CA125 and CA19-9 were higher in tumors occupying whole stomach than in tumors occupying limited one part of stomach. Our result was in agreement with previous studies that the sites of GC would affect serum marker levels [22, 28], and the reason might be that tumors occupying whole stomach were generally correlated with large tumor size and advanced pathological stage. The positive rates of tumor markers among the GC patients with different differentiation grade were not statistically significant in some previous studies [22, 29]. However, Seok et al reported that positive CEA were related to the grade of differentiation [30], and the present study found that positive CA125 was significantly correlated with differentiation grade. In summary, the differentiation grade has little impact on GC marker levels. In a multivariate analysis by logistic regression, we confirmed that pT stage, pN stage and gender were independent correlated factors of positive CA125 and CEA, while pT stage, pN stage and age were independent correlated factors of positive CA19-9.

Nomogram is an intuitionistic and widely applied method to predict the prognosis of individual patient on the basis of some valuable parameters. In our study, we figured out that the nomogram visually showed the impact of some clinicopathological traits on the prognosis of GC patients in both training and validation cohorts. In the light of nomogram, the prognosis of individual patient could be well predicted. In order to maximize the use of serum tumor markers, NPTM was proposed and included in nomogram via a stepwise algorithm. The predictive accuracy of nomogram was well illustrated through calibration curve. Moreover, we compared the predictive accuracy between nomogram and TNM staging system, and the result showed that nomogram with NPTM and other parameters was better than pTNM stage alone. According to the nomogram, however, we still regarded pTNM stage as one of the most important parameter in GC, but more importantly, other indexes like NPTM and tumor size should also be noticed.

There were some limitations to our study. Firstly, this is a retrospective analysis comes from a single center in western China, the results of this study may not represent overall Chinese population well. Secondly, our study did not take in the control groups including health person and patients with benign lesions, and the comparison of serum tumor marker levels in different groups could not be made. Thirdly, CA72-4 and CA15-3 were not routinely tested for GC patients in our hospital, therefore they were not analyzed and discussed in this study.

In conclusion, preoperative levels of serum CA125, CA19-9 and CEA were correlated with most of clinicopathological traits, especially pTNM stage. The positivity of CA125, CA19-9 and CEA could provide important prognostic information in GC patients and indicated less favorable outcomes. In addition, CA125 was an independent prognostic factor for GC patients and could be further investigated. Nomogram based on NPTM could accurately predict the prognosis of GC patients.

All enrolled patients received regular follow-up. Outpatient visit was considered to be the optimal choice, meanwhile, telephones and mails were adopted as two main supplementary follow-up methods. According to the National Comprehensive Cancer Network (NCCN) gastric cancer guideline, follow-up was carried out every 3 to 6 months for 1 to 2 years, every 6 to 12 months for next 3 to 5 years, and annually thereafter. The follow-up time of patients in both training and validation cohorts was up to January 2016. The loss of follow-up was mainly due to the change of phone number or home address.

The authors indicate no potential conflicts of interest.