Human X chromosome has higher densities of microRNAs (miRNAs) compared to the average densities on autosomes. Given that numbers of X-linked miRNAs can escape from meiotic sex chromosome inactivation (MSCI) silencing, it is proposed that X-linked miRNAs may play critical roles in the process of spermatogenesis. To test the hypothesis, we performed DNA capture sequencing of human X-linked miRNAs, which was followed by a two-stage case-control study to identify the non-obstructive azoospermia (NOA) related single nucleotide variants (SNVs) in 1107 NOA cases and 1191 fertile healthy controls. Eventually, we found rs5951785, located near hsa-miRNA-506/507, increased the risk of NOA, while rs1447393, near hsa-miRNA-510, decreased the risk of NOA. Functional analysis revealed that rs5951785 significantly inhibited cell proliferation and induced cell apoptosis. Taken together, our results demonstrated that X-linked miRNAs played important roles in the pathogenesis of NOA.

MicroRNAs (miRNAs), a novel class of small non-coding regulatory RNAs [1], can repress target gene expression through binding to the 3’ untranslated regions (3’ UTR) of mRNA [2, 3], and their dysregulation contributes to the aetiology of numerous diseases, such as cancer, metabolic diseases and viral pathogenesis [4]. Accumulating evidence demonstrates that miRNAs take part in the process of spermatogenesis [5].

Comparing to autosomes, human X chromosome, containing genes that are uniquely expressed in male spermatogenesis, has higher density of miRNAs (referred as X-linked miRNAs) [6] and 38% of them are testis-specific or testis-enriched [7]. They participate in a number of biological processes, including cellular differentiation, proliferation and apoptosis [8]. Due to the existence of the meiotic sex chromosome inactivation (MSCI), X chromosome is silenced during spermatogenesis [9]. However, some X-linked miRNAs can escape from MSCI and regulate gene expression during late meiosis and early post-meiotic stage of spermatogenesis [7, 10]. Recently, Royo et al. reported that X-linked miRNAs are expressed before prophase I but absent during pachynema [11], and X-linked miRNAs have been reported as potential contributor to the regulation of cell cycle and spermatogonial stem cell renewal, which is crucial for the regulation of spermatogenesis, especially the mitosis of spermatogonia and meiosis of spermatocytes [12].

To systematically analyze X-linked miRNA-related SNVs and their effects on non-obstructive azoospermia (NOA), the most severe form of male infertility, we performed a chromosome-wide scan for SNVs near pre-miRNAs in X chromosome followed by SNPscan and SNaPshot in two independent validation phases. Eventually, two SNPs (rs5951785 and rs1447393), located near the regions of hsa-miR-506/507 and hsa-miR-510, were found to be associated with NOA, and in vitro analysis was performed to clarify their potential functions in spermatogenesis.

Based on the miRNASNP (http://www.bioguo.org/miRNASNP/), customer designed arrays were used to capture the X-linked miRNAs regions including upstream (1KB) and downstream (1KB) in 96 NOA cases and 96 fertile controls. Totally, 91 regions were captured followed by high-throughput sequencing on Illumina HiSeq 2000 to generate 100 pair-end reads. On average, each sample was sequenced to an average depth of 115×, with nearly 90% of the targeted regions covered by ≥2×. Totally, we identified 139 SNVs (including one SNP with MAF<0.05 and 138 SNPs with MAF>0.05) in X-linked miRNAs regions, among which, 22 SNPs were associated with NOA risk (Supplementary Material, Table S1).

For fast track replication, 22 signals were included in Stage I validation using an independent Chinese population (Supplementary Material, Table S2) by custom designed SNPscan. Unexpectedly, 18 markers identified in screening stage were not observed to be associated with NOA risk in Stage I with P values > 0.05 (Supplementary Material, Table S2). Only rs547043 near hsa-miR-4330, rs5951785 near hsa-mir-506/507, rs1447393 near hsa-mir-510, and rs5985440 near hsa-miR-652 were retained associated with NOA, among which rs547043 near hsa-miR-4330 was inconsistent with screening stage. To confirm the relationship between the other 3 SNPs and NOA risk, we carried out stage II validation in another large population (Supplementary Material, Table S3). Rs5951785 and rs1447393 were both observed to be still associated with NOA in the same direction as illustrated in the screening stage and validation stage I. Next, we performed a meta-analysis of the genotype data from stage I and II. In the combined analysis, we found that rs5951785 significantly increased the risk of NOA in the Han Chinese population (P meta = 1.01×10−3, OR = 1.45, 95% CI = 1.16-1.81). Rs1447393 acted as potential protective factor on NOA (P meta =1.31×10−4, OR=0.58, 95%CI=0.44-0.77) (Table 1). To further extend our analyses, we searched the GTEx database to see whether these two variants were quantitative trait loci (eQTL) variants, albert we did not find significant eQTLs in the available data sets [15].

b OR and P values were calculated by additive model.

Effects of SNPs on MiRNAs and their targets 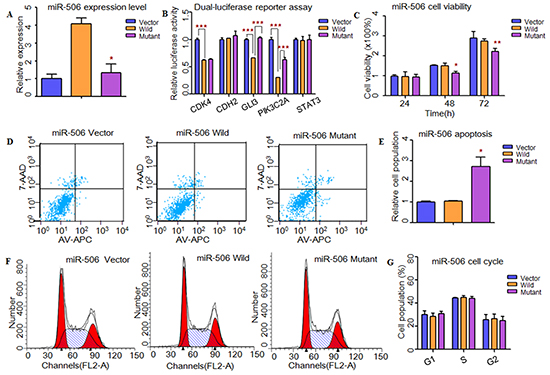 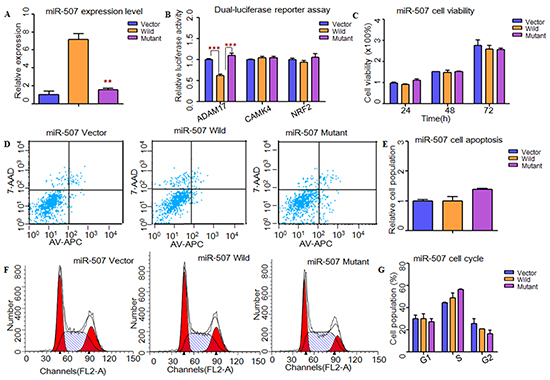 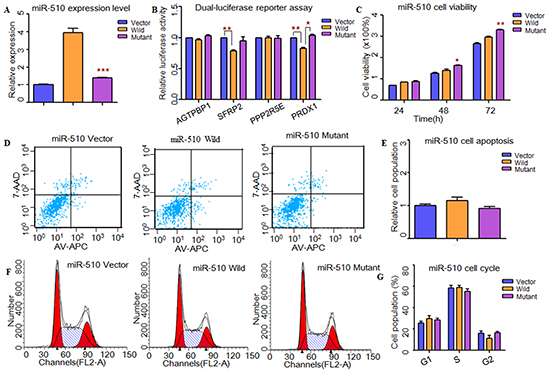 Next, we used TargetScan, miRanda and miRwalk to predict the putative targets of these three miRNAs (Supplementary Material, Tables S4-S5). Through conducting dual-luciferase reporter assay, we found that the luciferase activities of CDK4, GLI3, PIK3C2A, ADAM17, SFRP2 and PRDX1 were significantly decreased when compared to the vectors, suggesting that they were the potential targets of hsa-miR-506, hsa-miR-507 and hsa-miR-510, respectively (Figure 1B, 2B, 3B). Then, we wanted to know whether these SNPs changed miRNAs’ binding ability with its targets. As results shown, the relative luciferase activities were significantly increased with hsa-miR-506 mutant type for GLI3 (P=1.11×10−5) and PIK3C2A (P=4.00×10−4, Figure 1B), hsa-miR-507 mutant type for ADAM17 (P=2.00×10−4, Figure 2B) and hsa-miR-510 mutant type for PRDX1 (P=2.00×10−3, Figure 3B) compared with wild-type, respectively. However, to the CDK4 (Figure 1B) and SFRP2 (Figure 3B), no significant difference was observed between the wild-type and mutant-type.

Effects of MiRNAs and sNPs on cell functions

X-linked miRNAs are important to spermatogenesis, but till now few studies have investigated the relationship between X-linked miRNAs and male infertility. To comprehensively investigate their relationship, we conducted X chromosome-wide miRNAs capture sequencing and large-scale follow-up genotyping. Our results demonstrated that i) rs5951785 near hsa-miR-506/507 was associated with significantly increased risk of NOA, while rs1447393 near hsa-miR-510 decreased the risk of NOA; ii) rs5951785 significantly decreased binding affinity of hsa-miR-506, inhibited cell proliferation and promoted cell apoptosis.

Several studies have reported that the SNPs in pre-miRNAs could reduce the production of mature miRNAs [16, 17]. Consistent with these related studies, the expression levels of these three miRNAs were all down-regulated with mutant alleles. Through dual luciferase report assays, we found rs5951785 and rs1447393 decreased their binding activity with mRNA 3’UTR of GLI3, PIK3C2A, ADAM17 and PRDX1, respectively.

GLI3, a potential target of miR-506, has been reported highly expressed in spermatogonia cells (both type A and type B) [18]. It could inhibit cell proliferation and promote cell death [19], which was consistent with our functional analysis of rs5951785 near hsa-miR-506, suggesting that GLI3 might be associated with NOA. ADAM17, a target of miR-507, is involved in germ cell apoptosis during spermatogenesis [20]. Environmental toxicants exposures can also active ADAM17 to induce the extrinsic pathway of apoptosis in the germ cell [21]. However, we didn’t observe apoptosis changes after overexpress hsa-miR-507. This might due to the low expression level of ADAM17 in HEK-293T cell. PRDX1, a target gene of hsa-miR-510, was reported to participate in removing the ROS [22]. Spermatozoa is highly susceptible to ROS-induced damage and dysregulation of PRDX1 might induce sperm DNA damage.

In conclusion, rs5951785 near hsa-miR-506/507 and rs1447393 near hsa-miR-510 were identified to be potential modifier of NOA. Our findings further highlighted that genetic variations in miRNAs might play important roles in the pathogenesis of NOA and might serve as therapeutic targets for NOA.

This study was approved by the institutional review board of Nanjing Medical University, China (FWA00001501) and conducted according to the Declaration of Helsinki. All participants were voluntary and completed the informed consent in written before taking part in this research.

A three-stage case-control study was conducted: we captured and sequenced all X-linked miRNAs by customer designed array (Agilent SureSelect DNA Capture Array) in 96 NOA affected individuals and 96 fertile controls in screening stage, and a subsequent 2-stage replication with large-scale follow-up genotyping in large cohorts of NOA-affected subjects and fertile controls was performed. The subjects included in screening stage were recruited from the Nanjing Center of Reproductive Medicine between March 2010 and January 2013. The first replication stage (stage I) included 548 NOA cases recruited from the infertility clinic at the Affiliated Hospitals of Nanjing Medical University at Jiangsu (NJMU Infertile study) and 560 healthy male controls from the same hospitals during the same period. And the second replication stage (stage II) included 465 NOA cases sampled from Renji Hospital, Shanghai, and 537 healthy male controls from the same hospital. Some cohorts within the sample sets have been reported in previously published data [23, 24].

After checking quality of sequencing reads by FastQC (http://www.bioinformatics.babraham.ac.uk/projects/fastqc/), low quality, short reads and 3’ end of reads with a quality less than 15 were trimmed by FASTX-Toolkit (http://hannonlab.cshl.edu/fastx_toolkit/index.html). For calling of variants, good quality reads were mapped to the human reference genome (UCSC, hg19) using Burrows-Wheeler Aligner (BWA) [26]. Genome Analysis Toolkit (GATK) was used for realignment, base quality score recalibration and duplicate remove [27]. In brief, VarScan and SAMtools were used to identify variants with in-house parameters [28, 29]. SNPs, In/Dels and mutations were annotated using dbSNP132 or the 1000 Genomes Project.

Follow-up genotyping of screened genetic variants by SNPscan and SNaPshot

Candidate SNVs were genotyped in additional cases and controls by a custom-by-design 48-Plex SNPscan™ Kit (Cat#:G0104; Genesky Biotechnologies Inc., Shanghai, China). This kit was developed according to patented SNP genotyping technology by Genesky Biotechnologies Inc., which was based on double ligation and multiplex ﬂuorescence PCR [30]. In order to validate the genotyping accuracy using SNPscan™ Kit, 5% duplicate samples were analyzed by single nucleotide extension using the Multiplex SNaPshot Kit (Applied Biosystems Inc., Foster City, CA, USA), and the concordance rates were more than 99%.

Stata package (Stata Corp, LP) and P-link packages were used for data analyses [31]. Multivariate logistic regression under additive genetic model was used to calculate the odds ratios (ORs) and 95% confidence intervals (CIs) of the associations between SNPs and NOA risks. The Cochrane Q statistics test was used for the assessment of heterogeneity. Mann–Whitney test was used to compare the gene expression levels between different groups.

Cells were seeded in 96-well plates. 24, 48 and 72 hours after transfection, CCK8 solution (Vazyme, China) was add to each well, then continued incubating for 1 hour at 37°C. The absorbance of each well was detected using TECAN Infinite M200 multimode microplate reader (Tecan, Belgium). As to cell cycle and apoptosis, cells were collected 24 hours after transfections and measured by FACS (BD, USA). All experiments were performed in triplicate independently.

We thank all the research staff and students who took part in this work. Funding was provided by grants from National Basic Research Program of China (973 Program, 2012CBA01306), the National Natural Science Foundation of China (81471500, 81330067 and 81322039), Distinguished Young Scholars of Jiangsu Province (BK20130041) and the Priority Academic Program for the Development of Jiangsu Higher Education Institutions (Public Health and Preventive Medicine).

CL and XW directed the study, obtained financial support and were responsible for study design. JJ performed overall project management with YQ and RZ, performed statistical analysis with ZH, MC and WW, and drafted the initial manuscript. RZ, YZ and LS were responsible for animal care and sample preparation. XL, HS, ZH and YX conceived of the study, and participated in its design and coordination and helped to draft the manuscript. All authors read and approved the final manuscript.