In addition to generating a large repertoire of T cells that recognize a wide array of unknown pathogens, the thymus also adds self-reactive T cells to the peripheral T cell pool. Cytotoxic T lymphocyte associated antigen-4 (CTLA-4) is a key player in the control of self-reactive T cells. Genetic deficiency in CTLA-4 is lethal in mice due to profound immune dysregulation and autoimmune disease [1]. This highlights the critical immunoregulatory function of CTLA-4.

We recently published two papers on the association between CTLA-4 SNPs and the rate of acute rejection (AR) after renal transplantation [9, 10]. In the present study, we report that by estimating the glomerular filtration rate (eGFR) at different time intervals after renal transplantation, we determined that association between CTLA-4 SNPs (CTLA-4 rs733618, rs4553808, rs5742909, rs231775, rs3087243) and long-term renal function in Han Chinese transplant recipients.

Table 1: The influences of allele distribution of CTLA-4 SNPs on long-term allograft function over 60 months

Table 2: The influences of genotype distribution of CTLA-4 SNPs on long-term allograft function over 60 months 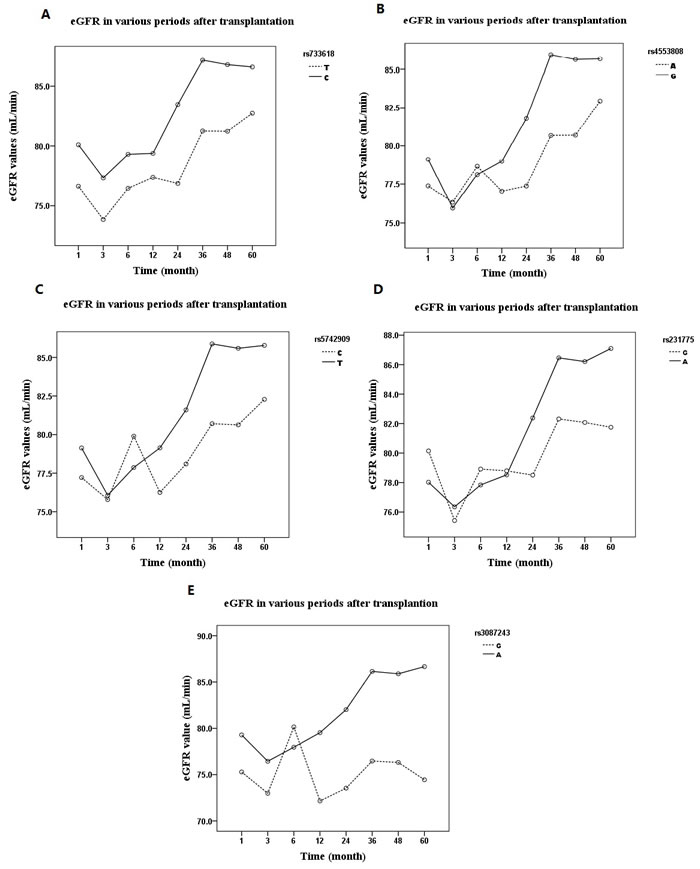 Our haplotype analysis showed that recipients with the CACAG and CGTAA haplotypes had better long-term kidney function (36 months after renal transplantation) based on eGFR [17] (P < 0.01). On the other hand, the TACGG haplotype was associated with poorer kidney function 24 or 36 months after renal transplantation (P < 0.05 or P < 0.01). The frequencies of the CGTAG, TACAG, CACGG and CGCAG haplotypes were very low or no association with long-term eGFR was observed.

CTLA-4 is a costimulatory receptor that controls T-cell activation. Its’ fusion protein was approved by the U.S. Food and Drug Administration in June 2011 for the prophylaxis of organ rejection in adult patients receiving a kidney transplant [18]. Kusztal M et al. found that rs231775 was associated with long-term kidney allograft function in Caucasian recipients[19]. In the present study, we assessed the influence of five CTLA-4 SNPs on long-term kidney function after renal transplantation in Chinese people. We observed that over a 60-month period after renal transplantation, eGFR was higher in individuals bearing the rs733618C, rs3087243A and rs5742909TT genotypes and lower in those with the rs733618TT, rs3087243GG and rs231775GG genotypes. These results are consistent with earlier reports that CTLA-4 rs231775 and rs3087243 are associated with long-term kidney allograft function or over survival [5, 19]. However, the present study is the first to report that CTLA-4 rs733618 SNP is associated with long-term kidney function after renal transplantation. Interestingly we also found in an earlier study that rs733618 is associated with AR after renal transplantation [10]. This may reflect ethnic differences between Asians and Caucasians, in whom the frequencies of the T allele are 60% and 93-94%, respectively [20]. Regarding the CTLA-4 rs5742909 SNP, the potential benefit was very weak (P = 0.049) and will require further examination of a larger sample to confirm.

Recombinant CTLA-4 containing a Thr17Ala substitution caused by the +49A/G (rs231775) SNP showed significantly less ability to inhibit T-cell proliferation and activation than its counterpart CTLA-4-17Thr [21, 22]. This means a stronger immune response is achieved with the rs231775G/GG genotype. Consequently, as we’ve observed previously [9, 10], the rs231775 SNP is associated with a higher incidence of AR and worse allograft function after renal transplantation. The CTLA-4 rs3087243 SNP could decrease sCTLA-4 levels at the cellular level and in renal transplant recipients [23, 24]. However, lower sCTLA-4 levels lead to weaker immunosuppression [23], which may explain the poorer kidney function in recipients with the rs3087243 G/GG genotype. The CTLA-4 rs733618 SNP is located in the promoter region and reduces binding of the transcription factor nuclear factor 1 to its binding site, thereby weakening expression of cell surface CTLA-4 [25]. This in turn decreases suppression of immune attacks after renal transplantation. It is therefore not surprising that recipients carrying the T/TT genotypes at CTLA-4 rs733618 have a higher incidence of AR and poorer renal function than those carrying the CTLA-4 rs733618 C/CC+CT genotypes [10].

In conclusion, our results show that the favorable rs733618C, rs3087243A and rs5742909TT genotypes and CACAG and CGTAA haplotypes may serve as indicators of better allograft function in Chinese renal transplantation recipients. At the same time, patients with the rs733618TT, rs3087243GG and rs231775GG genotypes and the TACGG haplotype may have poorer long-term kidney function. These results provide new clues for individualized immunotherapy, especially long-term therapy for renal transplant recipients, though they will require confirmation by larger studies.

The study was conducted in China and approved by the Ethics Committee of Shanghai Jiao Tong University. All participants provided written informed consent. A total of 292 cadaveric renal transplantation recipients (194 men and 98 women; median age, 46.0 years) were included. The transplantations took place at the Shanghai Organ Transplantation Center from 2006 to 2009 with follow-ups of not less than 60 months. The blood groups of all recipients were matched with their donors, as were a panel of reactive antibody and HLA-A-B-DR. Blood samples were collected from all patients for genetic analysis at the start of the study and for the evaluation of the creatinine concentration 1, 3, 6, 12, 24, 36, 48 and 60 months after renal transplantation. The eGFR was calculated using the abbreviated Modification of Diet in Renal Disease (MDRD) study equation, c-aGFR(ml/min per 1.73m2) = 186×[sCr (mg/dL)]-1.154 × [age(years)]-0.203 × (0.742 if female)×(1.233 if Chinese) [26].

Mycophenolate mofetil (MMF) and methylprednisolone were given prior to surgery and on the 2 days after the operation. A standard immunosuppressive protocol of triple therapy with Cyclosporine (CsA)/Tacrolimus (TAC), MMF and prednisone was administered beginning on the third day after the operation. The MMF dosage was 1.0-1.5 g/day with a weight of 60 kg as the critical value. The CsA and TAC were started at dosages of 8 mg/kg/day and 0.2 mg/kg/day, respectively, and then adjusted based on the blood drug concentration and serum creatinine.

Statistical analysis was performed using SPSS 20.0 software (SPSS Inc., Chicago IL, USA). The eGFR in those renal recipients were compared between genotype groups using the nonparametric Kruskal-Wallis test followed by the Mann-Whitney test. An adjusted P value < 0.05 was considered statistically significant. Genotype associations were analyzed using a dominant model (minor-allele homozygotes plus heterozygotes vs. major-allele homozygotes) and a recessive model (minor-allele homozygotes vs. heterozygotes plus major-allele homozygotes). The allelic frequencies were counted in a single strand of measured DNA. The effects of SNPs, time and the SNPs*time interaction on eGFR were determined using repeated-measures ANCOVA. We explored the haplotype association for five SNPs using Haploview version 4.2. Haplotype was analyzed using the expectation-maximum algorithm.

This project was supported by grants from the National Natural Science Foundation of China (81370842 and 81403010) and supported by the Organ Transplantation Center, Shanghai Jiao Tong University, Shanghai.

The authors disclosed no potential conflicts of interest.